Dustin Brown has been nominated as the Los Angeles Kings’ representative for the 2018 Bill Masterton Memorial Trophy, presented annually by the Professional Hockey Writers’ Association to the player who best exemplifies the qualities of perseverance, sportsmanship and dedication to ice hockey. The list will shrink to three finalists before the winner will be announced at the NHL Awards in Las Vegas this June.

New Jersey forward Brian Boyle, who has played this season while battling chronic myeloid leukemia, is expected to win the award. A list of nominees per team is available here.

“You look at probably a guy like Brian Boyle, what he’s had to go through,” Brown said via audio shared by Los Angeles PHWA chapter chair Dennis Bernstein. “I mean, I just had a bad few years and I’m having a good year, so mine’s maybe a byproduct of being a part of a group of guys that hasn’t had to go through anything personally very tough.” 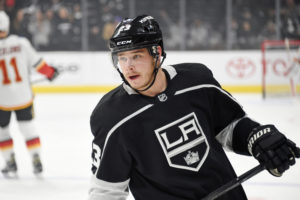 Brown, who was part of the 2003 Kings draft class with Boyle, doesn’t keep in continued close contact with his former teammate, though the two still exchange pleasantries and find time to chat when their paths cross at NHL rinks. Brown might not be expected to become a Masterton finalist, though with a major spike in his numbers across the board in the aftermath of declining usage in recent years under Darryl Sutter and the transfer of his captaincy to Anze Kopitar, his personal resurgence has been one of the most positive stories to come from the Kings this season. With 55 points, Brown, 33, is five points away from tying his career-high in points, established in 2007-08. His 23 goals are the most he has scored since he registered 28 in 2010-11.

The 2011 Foundation Award winner and the 2014 Mark Messier Leadership Award winner, Brown has been the You Can Play / Hockey is for Everyone ambassador in each of the last two seasons.

“I think his really being involved in the community with both Dustin and his wife is really important,” John Stevens said in Febriary. “I think he’s always been a really active guy in that department, so it’s interesting for him – he has four kids at home and he’s a busy guy and he’s got lots going on, but he always makes time for stuff like that. I think it’s important to him. I think he does it because he wants to do it and I think he wants to make a difference.”