Waking up with the Kings: March 20 - LA Kings Insider

If you base an evaluation of the LA Kings on a cursory glance of the numbers and statistics, they’re awfully healthy. Their offense has improved by nearly half a goal per game. Their goals-against has risen only marginally and has largely withstood the rising tide of power play-boosted offense across the league. Their +27 goal differential ranks seventh. They rank third in the league with a .920 save percentage. Their best player is having a career year and will be under consideration for a heap of league awards. And despite these improvements, they’re still in a tense dogfight to qualify for the Stanley Cup Playoffs, a late-season predicament that is based partially on a middling record in close games and a tendency to allow goals at inopportune times. So, when Eric Staal scored with one minute remaining in the second period to tie the game and Joel Eriksson Ek provided a go-ahead marker with 2:31 to play, it seemed as though several variables that have affected this team were encapsulated accurately through two momentum-swinging events in a narrow, tense game. But there has been another hallmark of this team that is apparent to anyone who has spent the majority of the 73 games to date affixed to their television or leaning forward from their seat at Staples Center: resilience, and, as John Stevens has articulated, to not let one singular moment in a hockey game affect their M.O. That first event – Staal’s goal, as the result of a heavy second period Minnesota push – was followed by a refreshing reset to a balanced third period. The second event, which came so late in the game, was followed by the team winning puck battles along the boards deep in the offensive zone for enough time to allow Anze Kopitar to return to the bench to pick up a new stick before he found Drew Doughty, whose wrister from distance was deflected by Dustin Brown past Devan Dubnyk to tie the game at three in the final minute. We’ve been here before. 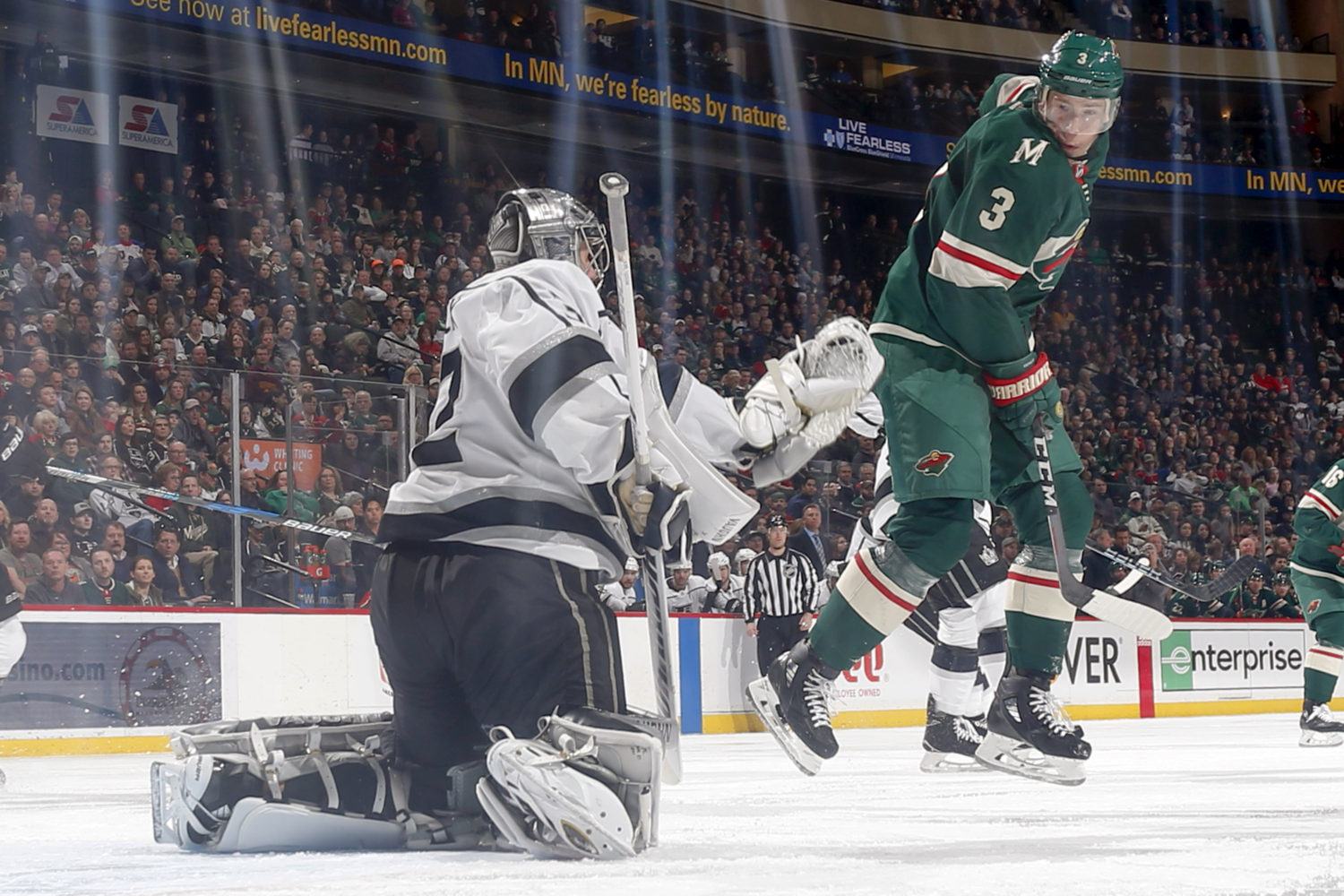 It was fitting that the final play of the game was Jeff Carter cleaning up the debris from Adrian Kempe’s high-speed power move to the front of the net. Kempe didn’t play a flawless game, but he was awfully good through the heavy majority of the nearly 65 minutes and attacked open swaths of ice with speed. He, like many of his teammates, was also an excellent stick-checker and very well may have taken a goal away from the Wild when he disrupted Nick Seeler’s bid from the slot on a four-on-two rush. (The Kings showed excellent use of their sticks throughout much of the game, with Alec Martinez denying a Mikael Granlund look at an open net and Drew Doughty neutralizing Jonas Brodin in addition to Kempe’s snuff-out.) But while they had the puck, they were very effective in their go-go-go efforts to work the puck up-ice with authority. Doughty was heavily responsible for this in Los Angeles’ first goal, which was finished off by Tanner Pearson on an attractive behind-the-back pass from Brown after Doughty blitzed through the neutral zone and generated a clean entry with authority that pushed the Wild back on their heels. Doughty’s overall performance was an effective response from the New Jersey game in which he wasn’t at his best. 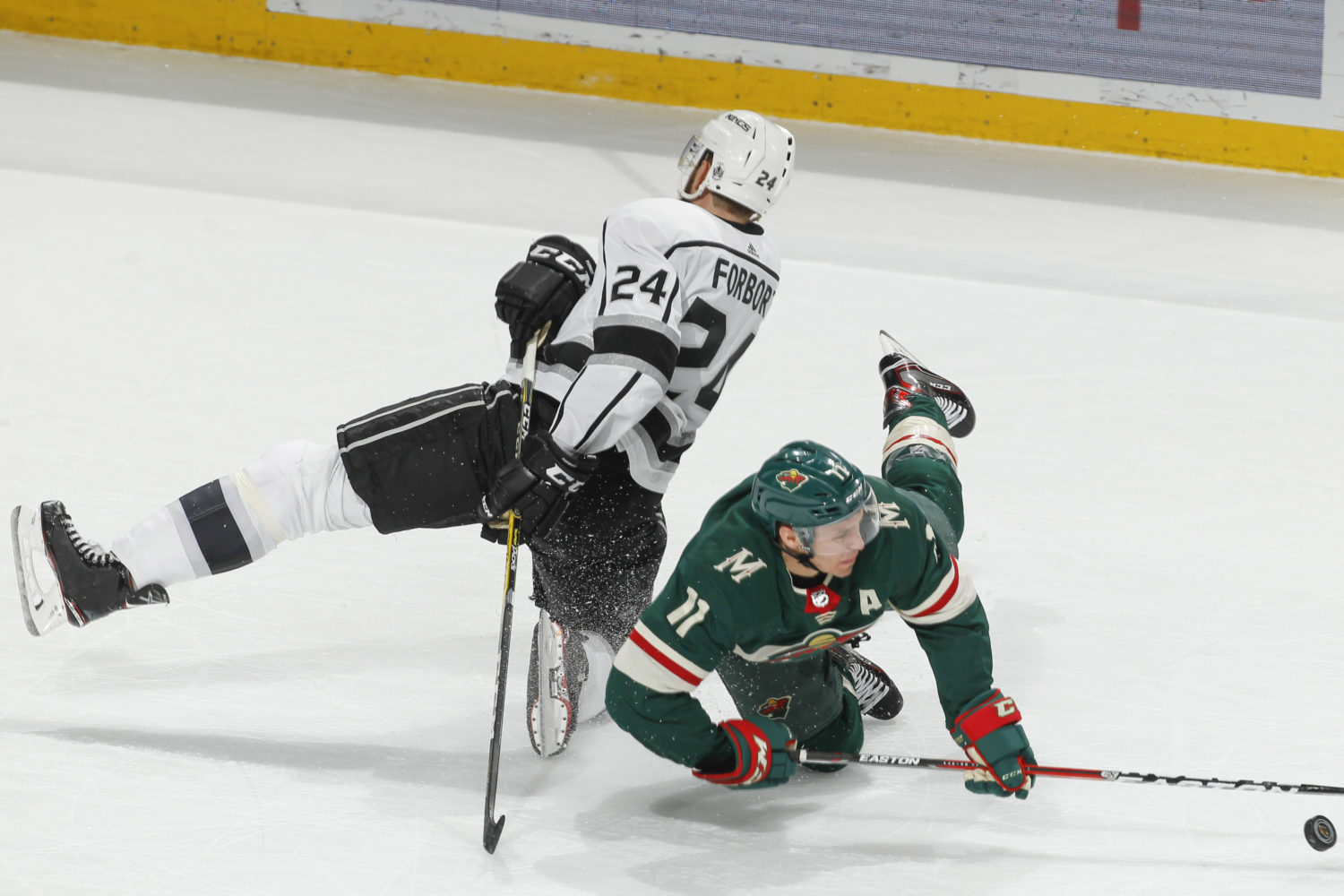 That’s a difficult game to manage, given Derek Forbort’s temporary absence, followed by 40 minutes in which the Kings didn’t have the use of one of their most reliable and responsible forwards in Trevor Lewis. The win, which boosted Los Angeles’ playoff probability by 9.8%, according to SportsClubStats.com, was also ably handled by Stevens. Andy Andreoff is not a player who generally swings win probability wildly in either direction, but in the games in which Stevens was looking to spark the overall team game after difficult losses – I’m looking at the comprehensive win at Philadelphia, which salvaged a tough New York-area trip, and the emotional 2-1 overtime win at Calgary, which followed the debacle in Vancouver – Andreoff was inserted into the lineup following extended absences. Along with Monday, those are three of the more important wins of the year, and all games showcased strong overall team games. Again, Andreoff, as someone who averages 9:30 of ice time per game, isn’t someone who tends to pivot games in one direction or another himself. But it does show that Stevens does understand the time and place to make difficult lineup decisions. It’s not easy to remove an important cog like Alex Iafallo from the lineup, but the rookie forward clearly benefited from getting a breather in early January by posting four goals and nine points in the 13 games that followed his two-game absence. Should Los Angeles qualify for the playoffs, you can bank on Iafallo returning to his familiar role for Game 1. But over 82 games, and with a full deck of players to choose from, there are going to be good players who are left out of the lineup. In a results-based league, it’s hard to argue against the right buttons being pressed, both in-game, and prior to it. 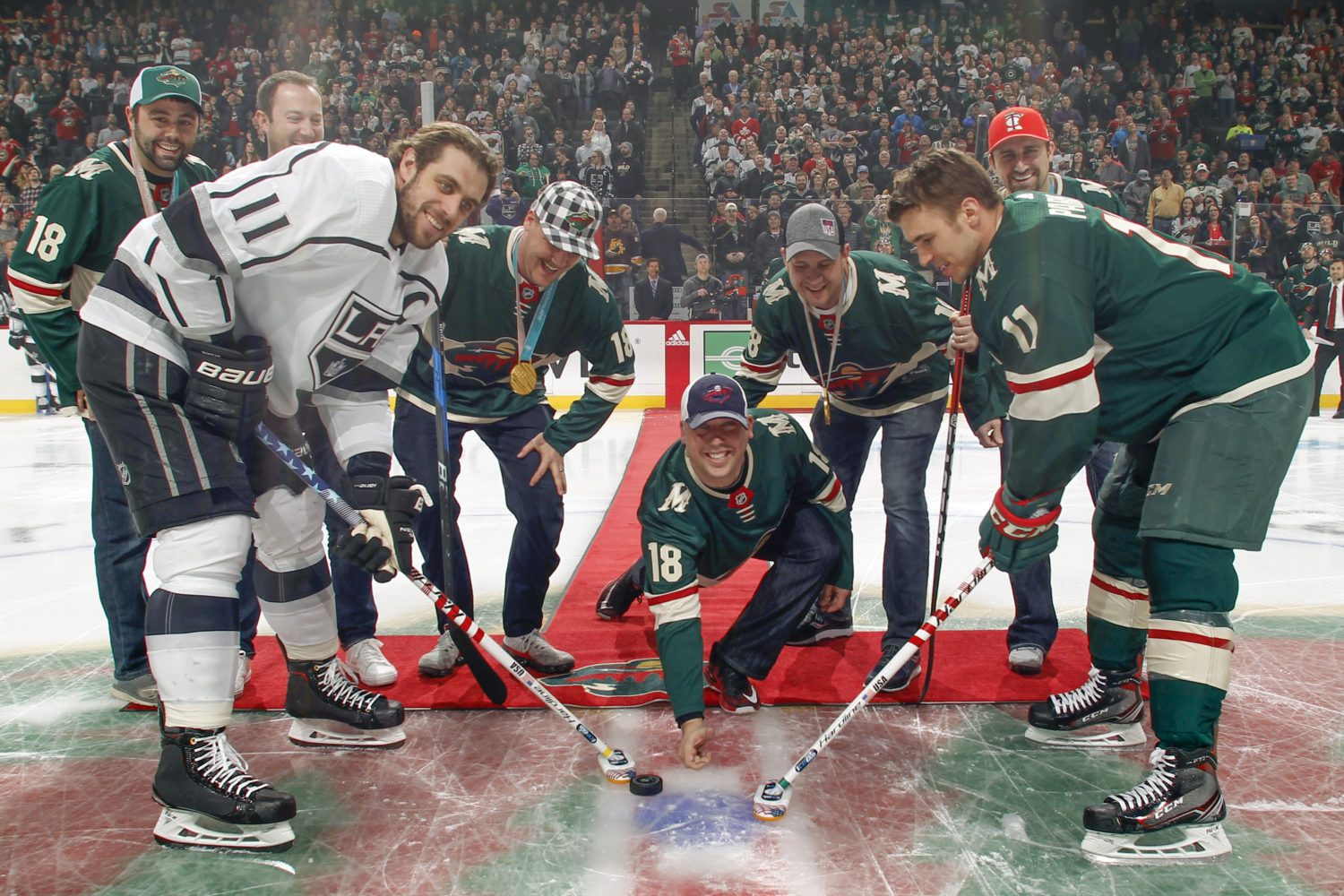