Insiders. A great afternoon to you from LAKI HQ. (At the moment, LAKI HQ is a desk, a Dodger hat, a keycard to get into the office, a notepad, some earbuds, an empty bottle of Tejava, a box of tissues, and a personalized letter from Richard Chung written on Simpsons letterhead.) (Seriously, thank you, Richard, that may be my most prized possession.)

The Kings practiced at 11:00 a.m. on Friday morning and aligned as such:

-Ay, it was a festive recognition of St. Patrick’s Day with the rarely used green practice jerseys. It’s too early to get a firm sense of whether there would be changes to the lineup; rushes appeared to show both Mitchell (who didn’t play on Thursday) and Amadio (who did) take rushes with the quote-unquote fourth line. Defensive pairings remained intact, so it’s likely that Paul LaDue will stay in the lineup. Jonathan Quick left the ice first, and with a third consecutive Saturday afternoon game looming, you are already aware that the #LAKingsGoalieTweetOff applies for the practice that precedes a matinee. Expect him to face the Devils (1:00 p.m. / FOX Sports West / FOX Sports GO / KABC 790 / I Heart Radio).

-As for the Devils, forward and familiar foe Patrick Maroon appears to be a game-time decision. He’s day-to-day with a lower-body injury, according to radio play by play broadcaster Matt Loughlin.

#NJDevils at practice in LA. No Patrick Maroon on the ice. pic.twitter.com/NlGgK4FTcb

It hasn’t yet been revealed who will start in goal for New Jersey. Cory Schneider and Keith Kincaid have been splitting time; Schneider is 17-14-6 with a 2.81 goals-against average and a .912 save percentage, while Kinkaid is 18-9-2 with a 2.95 GAA and a .906 Sv%. Kincaid, a certified King Killer™, is 2-0-0 in his career against Los Angeles with a 0.37 GAA and one shutout. He has allowed one goal on 64 shots against the Kings. Stick taps to Southern California sportswriting alum Abbey Mastracco, who has joined the Bergen County Record and will leave the Mets beat to cover the Devils.

-Because Anze Kopitar’s game-winner was so bizarre, and because it happened against Detroit, it immediately triggered a number of observations that it was “karma” or “payback” or simply “ironic” considering the Kings lost a game at Joe Louis Arena in 2014 in which a late third period Niklas Kronwall shot deflected high into the air, catapulted off the netting high above the goal, and cascaded off Jonathan Quick’s back and into the net to tie the game. (The Red Wings won in a shootout, and Darryl Sutter had himself a night. You remember this game.)

As Kopitar noted yesterday, there’s a bit of a difference because “the other one shouldn’t have counted,” before acknowledging maybe there was some karma or juju involved. In any event, the coaching staff was thinking the same thing you were.

“It’s funny, we talked about that last night. It’s ironic that play happened,” John Stevens said. “It’s kind of a bizarre play. That one in Detroit was probably more bizarre than the one last night. It brings back really bad memories, because if I recall, did we lose that game in a shootout? So that was really, really bizarre. The thing that stands out to me with that play, I’ll never forget it, Drew Doughty, the way he tracks the hockey puck, he saw it the whole way. His words to me were ‘Johnny, 1,000%, that puck hit the screen.’ Similar plays where you lose sight of the puck, it hits a guy in the back, ends up in you net, a very, very unusual play. I’ve always been a believer when your team is totally commited and your team works hard, sometimes you get the breaks, and I think that might’ve been the case last night.”

-Meanwhile, Jake Muzzin was back on the ice the day after he missed some time when he blocked a Martin Frk slapshot with his hand and was in pain on the bench before heading back towards the team’s areas late in the first period. He was fortunate, and escaped serious injury as the puck caught him in the meaty part of his left hand.

It was part of a physical game for Muzzin in which he was noticeable defensively. He also decked a pass-admiring Nick Jensen in the same area of the Staples Center ice Brayden McNabb had previously laid claim to and dove to disrupt a stretch pass that nearly resulted in a Red Wings breakaway. These efforts came as he was partnered with the smooth-skating Paul LaDue, whose skill set tips more towards the offensive. It’s the latest update to an interesting maturation process for Muzzin, who is 29 and three years into a five-year, $20-million contract.

“Yeah, I had Muzz as a young player, and one thing we realized early on was that if you didn’t have a lot of feedback with Muzz, he probably expected the worst, so we felt it was very important with him to communicate on a daily basis on his game, what he did well, what he didn’t do well, because if he didn’t have any communication, he would just see what he didn’t do well,” Stevens said. “He’s a very hard critic on his own game, but I think through that process and with the people around him here on the hockey team, he’s become a really good pro. He prepares himself as good as anybody, his off-season, off-ice, year-round commitment to being ready all the time is as good as anybody, and I think that’s really helped the mental preparation with his game, too. I think he has a really firm understanding of how he needs to play, and I think he has a really honest opinion of his game of what he does well and what he doesn’t do well, and how to go about fixing it. I think he’s just learned to have a really honest assessment of his game, and I think we’ve really tried to give him the feedback he needs to combine that with his own thoughts of his game. He’s become a guy that I think has been put in a position to provide leadership on top of his play as a veteran player.”

That’s some steady process from Rookie Jake Muzzin, who has come a long way from some tougher minutes in those tight 2013 playoff series. Sophomore Jake Muzzin was among the key figures in the team’s 2014 Stanley Cup run, and this current season is probably the best he has shown in the NHL to date.

-Random thought that surfaced during the Kings’ 4-1 win on Thursday: what do players see as the standard for using two hands on the stick to shove or defend against an opponent around the perimeter? What will result in a penalty, and when will the referees allow for some leeway? The thought was spurred by Danny DeKeyser’s cross-checking penalty midway through the second period that appeared to cross a line from earlier two-handed jabs.

From a quick query, using two hands on the stick to shove or goad an opponent from behind isn’t the preferred way to defend. There are better ways to separate body from puck.

“I think as a defenseman, the way that we defend, you work from your stick first,” Dion Phaneuf said. “You work with a good stick, try to poke the puck and then you take the body, and it’s about winning the one-on-one battle. As defensemen, that’s what our job is, and that’s what we try to do.”

As for the corner and boards battles, it seems pretty clear. Cross a line, give a hard two-handed shove, you’re going to put yourself in position to get called.

“You can’t be full-on plowing the guy,” Drew Doughty said. “You’re allowed to kind of push. Like, if you’re on his back with the stick already, and you’re able to push, they’ll kind of let you get away with that. But if you start to push off his back, and you hit him, then they’re maybe going to call it. And if he goes down, they’re usually going to call it.”

There are ways to get some shoves in that don’t look like aggravated cross-checks.

“Yeah, and you can kind of get him over the top of the pants, too, so you can kind of control it,” Doughty said. It’s not the ideal way to defend an opponent, however. “I used to defend like that a lot, and I don’t use it as much as I used to. I try to get stick-on-puck.”

The most important end game is to turn the play around in the opposite direction and play in the attacking end. 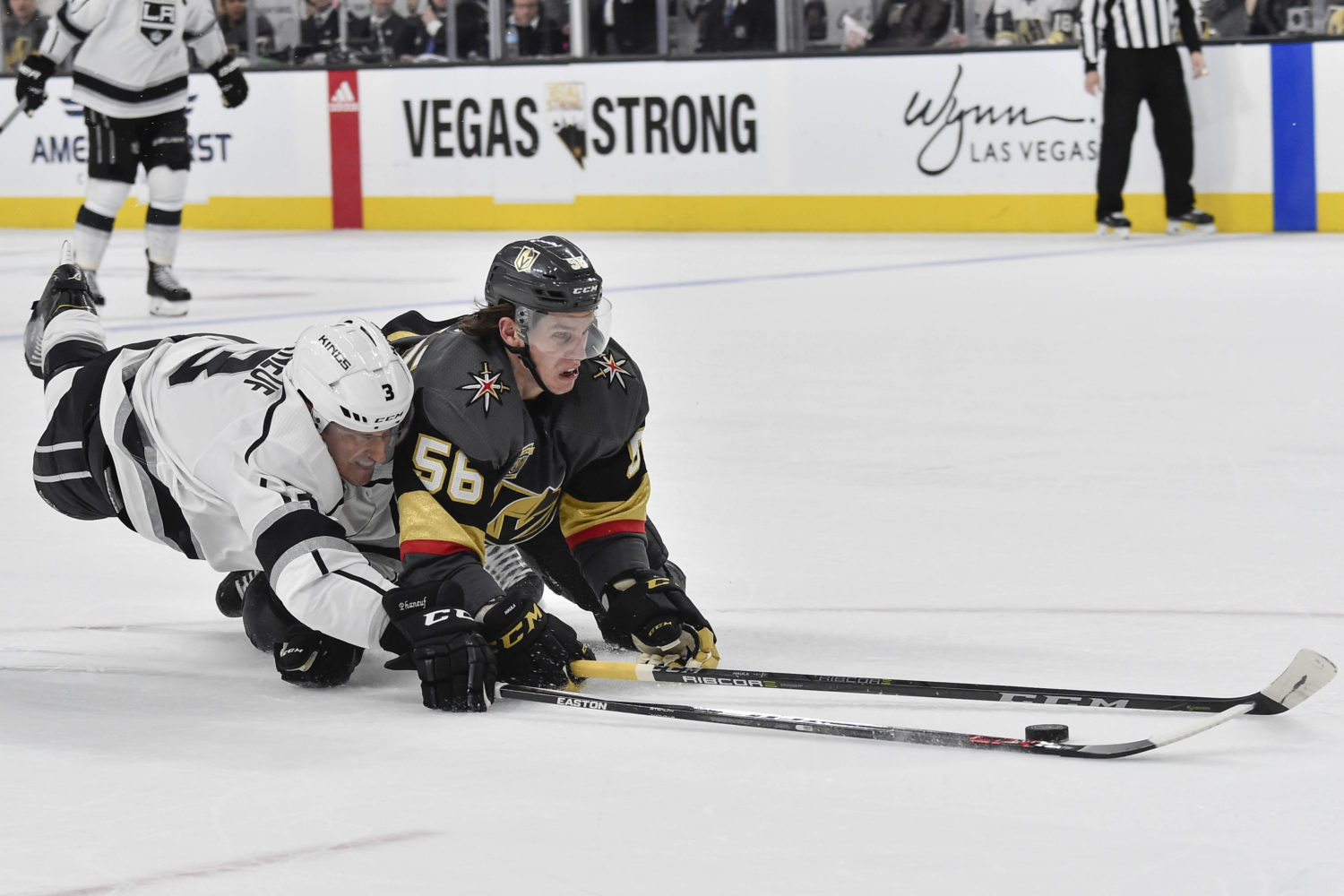