Waking up with the Kings: March 13 - LA Kings Insider

Waking up with the Kings: March 13

After the Vancouver Canucks had lost 1-0 in Arizona on Sunday, Jacob Markstrom shared some pointed words for a team that had lost its third straight and was unable to generate much punch to make up for a bevy of injuries affecting key players. “It’s not like the season is over and let’s meet up in September. That’s not how it’s going to be. I can promise you we’re not going to have the same guys here in September. You’ve got to earn your spots and it starts right now,” he said in what could be construed as an effort to rally the emotional level and conjure an attack with more pride when the team reconvened the following night at Staples Center. It wasn’t completely different from Los Angeles’ previous opponent. St. Louis skidded into Downtown Los Angeles having won once in their previous 10 games; they summoned the necessary battle and juju and won back-to-back games by an aggregate 11-4 count to keep their playoff hopes alive. Though both teams have been beset by injury, the Canucks, who have been sneakily good with their full assortment of players, didn’t have the same personnel as the Blues. They kept the game even through nearly 22 minutes on the back of a strong game in net by Anders Nilsson but simply ran into a focused, swiftly-paced and ready-to-battle Kings team that had clearly learned a lesson from Saturday’s shellacking. 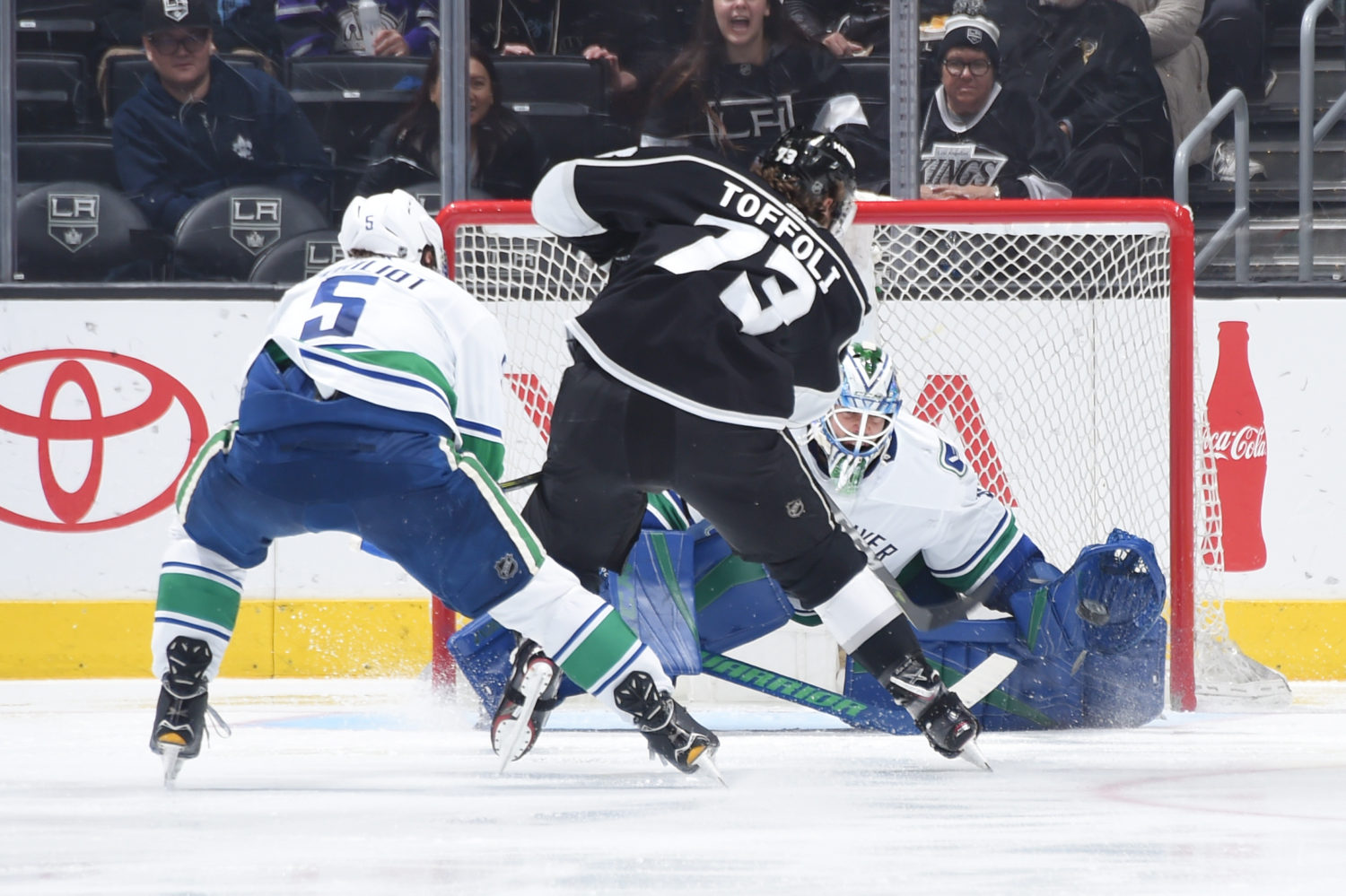 Los Angeles did so many things on Monday that they didn’t do on Saturday. They played a smart, controlled, composed, structured game in which they were relentless in winning back pucks and exchanging them up-ice with the go-go-go urgency that has been accentuated from last year to this. There was good speed and pace to their attack. They played fast. It was interesting that one of the conversations on Monday morning with John Stevens was about puck retrieval and the best chances in hockey coming off turnovers. Anze Kopitar’s goal, off a slick passing sequence from Drew Doughty and representative of the lightning-quick counterattacking similar to the origin of many of Vegas’ rush chances, originated with a terrific defensive play in which Alec Martinez dove, slowing down a Canucks’ rush long enough to allow Alex Iafallo to covertly lift a stick on the backcheck, steal the puck and head in the other direction to spark the ultimately successful scoring opportunity. 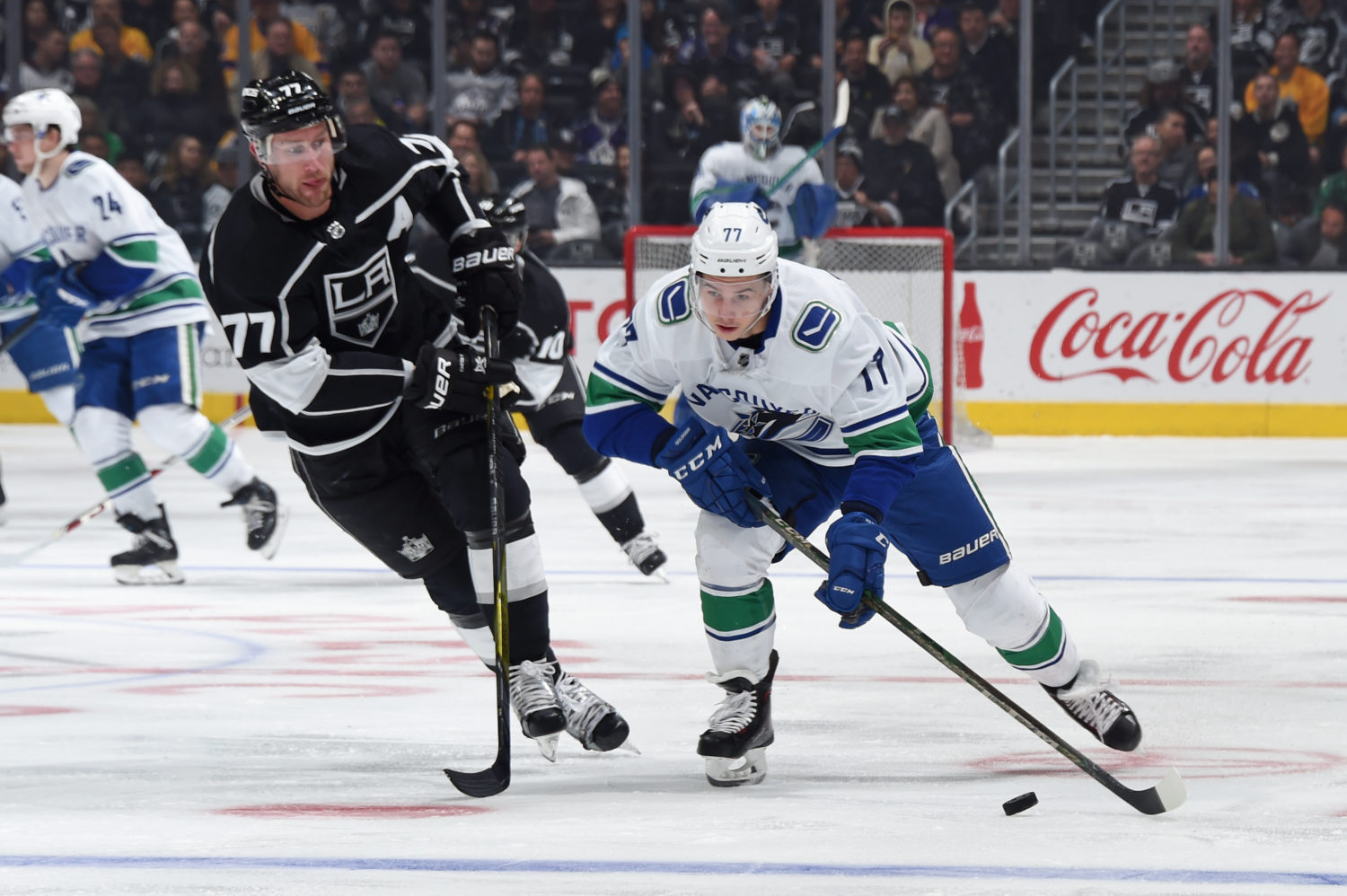 All lines skated with good energy and purpose throughout the win, but if there was one group to separate from the pack of offensive groups, it was the Kempe line. Reprising the energy and offensive zone play that had become associated with the group over the first half of the season, the Pearson-Kempe-Toffoli combination played disproportionately in the attacking end and was effective on the forecheck, setting up the first goal when Adrian Kempe won a puck battle, allowing Jake Muzzin to streamline a pass up-ice to a streaking Tyler Toffoli, and on the third goal, when Tanner Pearson’s pressure forced a Vancouver turnover in which Toffoli blocked the outlet before finding Kempe, whose pass to Pearson resulted in the left-winger outwaiting Nilsson and snapping the puck upstairs, a la NHL ‘95, as noted by Wyatt Arndt in I Watched This Game. (More on the end to a bleak season in Canucksdom can be found in last night’s Provies, courtesy of Jason Botchford.) As has often been said in following these types of complete performances, it’s not easy to single out one group. The Kings had the right mindset and won an important two points because their well-paced and heavier team game thrived. 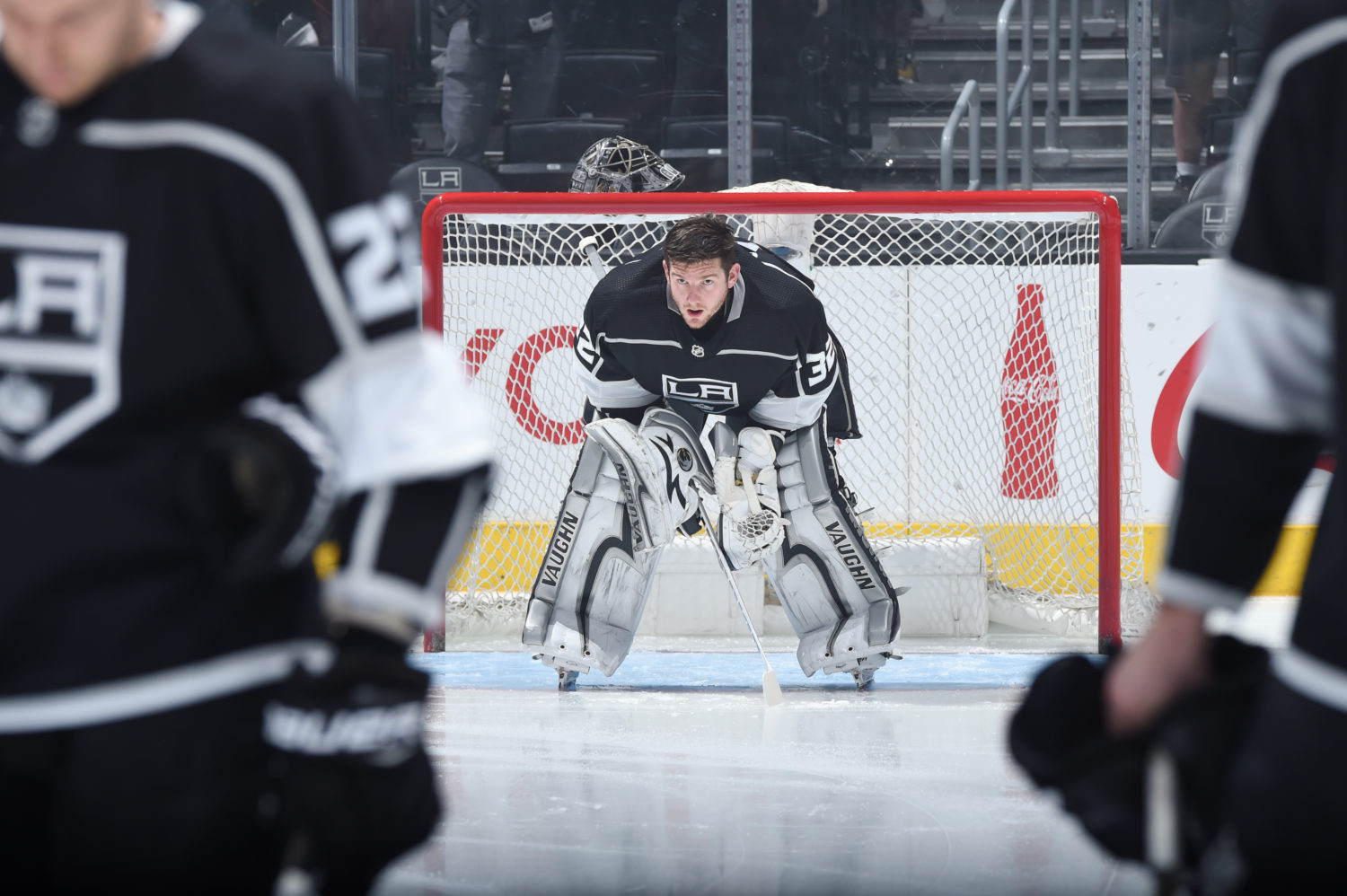