Waking up with the Kings: February 25 - LA Kings Insider

Waking up with the Kings: February 25

Forward Dustin Brown perfectly summed up the situation where the NHL reviewed his scoring opportunity in the last 10 seconds of the Kings’ 4-3 loss to the Oilers that was called a goal, and then overturned. Said Brown, “At the end of the day though we can’t wait til the last 10 seconds to score a goal like that, so but at the end of the day I think it’s a goal.” Even if the goal should have counted, in the team’s opinion, the Kings know they shouldn’t have put themselves in that spot of scraping and clawing in the last minute against an Oilers team that had the third-lowest record in the Pacific Division. Los Angeles allowed the first goal for the third straight game, and for the seventh time in their last nine, and got down 2-0. Then less than three minutes after forward Tyler Toffoli brought the game to 2-1, the Oilers increased their lead to 3-1. Los Angeles played a strong third period, but it was too little too late. The Kings are now two points out of the final Pacific Division playoff spot and Wild Card position – though the team has a game in hand on the groups in those spots, the Anaheim Ducks and Calgary Flames. 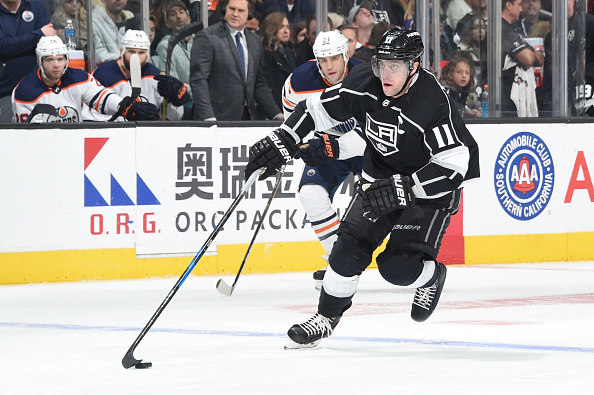 Forward Jeff Carter was back, and he looked mostly like his old self, coming off being out since October because of a cut that required surgery for an injured tendon in his ankle. He played 17:36, won 68.8 percent of his faceoffs and fired four shots on goal. He was also a plus-1. It may take him some time to get back into the full rhythm of games, but even if he’s not 100 percent, he’s still one of the NHL’s best options as a second-line center. Plus, it seemed like his presence in the lineup sparked Toffoli, his longtime linemate who scored his second goal in his last 20 games. If Toffoli can get going, that could be a big boost for Los Angeles’ offense. Lastly, the Tobias Rieder acquisition has looked pretty solid through his first two games with the team. The forward scored a goal and his speed enabled him to create chances. Plus he seems to play an honest all-around game. Overall on paper, the Kings look relatively deep and have a stable of healthy players who can play different ways, but they have to start to make a move at some point as they get into the stretch run.