The Kings returned to the ice Thursday for a full morning skate in advance of the team’s 7:30 p.m. home game against the Dallas Stars. Los Angeles last played Tuesday night in Winnipeg – the second game of a back-to-back – and was off Wednesday.

Below were the lines from practice as best I could see:

It didn’t appear that new addition Tobias Rieder was working with forward line rushes, but Coach John Stevens, when asked about Rieder’s status for Thursday’s game, said lineup decisions had yet to be made. Rieder also came off the ice with most of the team, while Clifford stayed on for extra work.

Jonathan Quick was the first goaltender to leave the ice, indicating he will start. The Kings recalled netminder Jack Campbell from the Ontario Reign earlier Thursday, so the team had three goaltenders at practice along with Scott Wedgewood, who was acquired from the Coyotes along with Rieder on Wednesday for netminder Darcy Kuemper.

Forward Jeff Carter returned to practice with the Kings for the first time since late October. Carter has only played in six games this season because of a deep cut that required surgery to repair a tendon in his ankle. Players seemed pretty pumped that Carter was with them again.

“Whenever one of your good buddies shows up to a party, everyone is a lot happier,” defenseman Alec Martinez said.

Stevens said Carter wasn’t 100 percent allowed to participate in contact drills, but the team wasn’t worried about him.

“A guy obviously of his caliber, it’s tough when you lose a guy like that for as long as it’s been,” Martinez said. “It’s good to see him back out here and obviously it shows that he’s making progress and hopefully he’s close and he feels good.”

Added defenseman Drew Doughty, “It’s definitely good to see him back out there and hopefully he recovers fully and is ready to go soon because it’s obviously going to be great to have a guy like that back.”

Carter is expected to speak to reporters Friday. He will not play tonight against Dallas.

– Rieder wore a big smile on his face after his first practice with the Kings. He pointed out that he had previously admired the organization from afar, which was a big reason why he seemed generally happy with his trade to Los Angeles.

“The Kings are a well-known organization you always look up to and you think that ‘what if I play for them one day’ and now it’s happening,” Rieder said. “I’m just really excited to be here.”

Rieder said he found out about the trade at around 4 p.m. or 5 p.m. yesterday and then it was a mad dash to get everything ready.

“From then on everything went pretty quick. I had to pack my stuff, flew out last night and now I’m here,” he said. “I actually brought a lot. I brought two suitcases. A shout-out to my girlfriend, she did a great job packing. We got that done pretty quick and obviously had to leave the same night.”

Kings players noted Rieder was generally a difficult match-up for them, so they were happy he’s with their team and not an opponent.

“He’s a good two-way forward, really fast,” Doughty said. “He was pretty tough to play against. I was out there a lot against him. He battles hard, has a good shot. He’s kind of what we needed on that side, you know, a speedy guy that can play both ways.”

Said Martinez, “We’ve been playing against him for years. He’s a really tough guy to play against He’s got a lot of speed, he has burned us a few times, so it’s nice to have him on this side of things.”

– Forward Trevor Lewis skated on his own after Kings morning skate Thursday. Lewis has been out since Feb. 9 with an upper-body injury. Stevens said Lewis is “limited in a lot of things he can do at this point.”

He is listed by the team as “day-to-day.”

– Former Kings goaltender Robb Stauber is an Olympic gold medalist. Stauber, who played a total of 56 games for the Kings from 1989-90 through 1994-95, was the head coach of the Team USA women’s Olympic squad that beat Canada 3-2 in a shootout in Wednesday’s gold medal game. 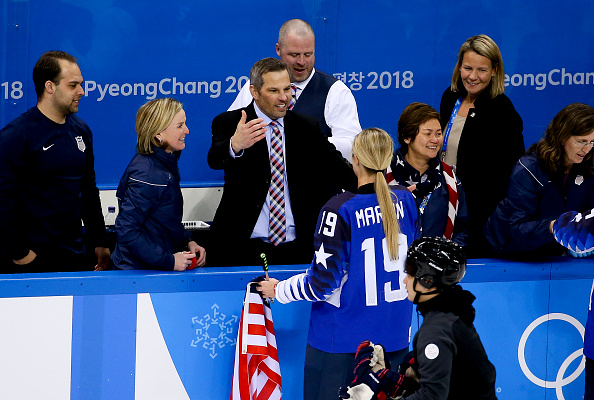 – The Coyotes officially announced Kuemper’s two-year contract extension with the team. Kuemper was a pending unrestricted free agent. After he was traded to Arizona, multiple media reports said he had agreed to a two-year deal worth $3.7 million.