By now, you’ve seen perhaps the most famous hair flip in Kings history. The Tousle Tussle, a bout in which Adrian Kempe momentarily brushed his hair out of his eyes while scuffling with Brendan Smith of the New York Rangers, was the type of moment that’s forgotten in a team loss but sparks smiles across the locker room when it happens during a win – as was the case in Sunday’s 4-2 victory.

“Yeah, I couldn’t see for a bit there, so I had to do something,” Kempe said. “I didn’t think so much when I did it.”

It was different from when Drew Doughty familiarly whips back his hair – “Drew does it more for the crowd, I think,” Trevor Lewis said – and called to attention the locks Kempe has grown in a similar vein as his favorite soccer player, Fernando Torres.

It was Kempe’s first fight since he scrapped as a teenager with Anssi Salmela in the SHL, which resulted in a match penalty and an automatic one-game suspension. It also raised a few eyebrows on the Kings that Smith, who isn’t a regular combatant but an experienced player with a number of fights under his belt, shoved Lewis from behind and dropped the gloves first to square off with a 21-year-old rookie.

“He’s fought a lot of guys, and obviously Juice hasn’t fought anyone,” Lewis said. “I thought it was good. It’s hockey, it’s going to happen.”

And, to be completely fair, Kempe isn’t an innocent bystander. He got in several shoves on Smith to precipitate the fight and plays with more jam than would be expected for a player with his degree of speed and skill and only 71 NHL games to his name.

“He didn’t ask me or anything, so that was the part when I thought that I was going to do it. He’s a big guy. I tried to stand up for myself and the team and it worked out pretty well,” Kempe said.

It seemed to spark the Kings, who benefited from the extra two-minute roughing call assessed on Smith. They scored on the ensuing man advantage, one of three second period power play goals that turned a 2-0 deficit into a 3-2 lead and ultimately the 4-2 decision.

“It was an emotional game,” Lewis said. “I think we needed to play a little bit desperate to get out of the funk we were in, and obviously we were down a couple goals. Just trying to do anything we could do to get the guys going, and obviously Juice dropped the gloves, and he’s not known for that. I think it got us really emotionally involved and set the tone for the rest of the game.”

Trevor Lewis, on the discussion in the dressing room during the first intermission:
It was positive. I think we always try to stay positive. It sucks losing, especially six games in a row there. We were down two-nothing, and we knew we really had to make a push and obviously came out there and thought it was a good response by everyone.

Lewis, on having extra emotion after the first period scraps:
Yeah, definitely. Especially with a guy like Juice that doesn’t do it very often, he did a good job, and obviously the hair got in his way a little bit, but he did a good job to flip it out of there, and it was good.

Adrian Kempe, on whether he thought his fight helped propel the team:
A little bit. I think we started playing a little better at the end of the first period as well, and I think we were on the way back, and then that happened and we got some power play for it. I think all the guys were pumped and I was as well, and we scored on the power play there, so that was key for the comeback. We scored three power play goals, and that was huge for the team. They did a great job out there, so that was important for us.

Kempe, on whether the win served as an important emotional reset:
For sure. The win yesterday was very big and to get some momentum and confidence back for the team is important. Heading into the road here, I think that the win yesterday definitely helped us, and everybody’s back and the emotion is great now and back with the team. That’s really important coming into these two games before the break here.

Nick Nickson was also a finalist for Radio Play by Play, Nickson and Evans for Radio Talk Show, and Fox for TV Pre and Post/Host/Reporter. Nickson, Fox and Miller are all members of the SCSB Hall of Fame.

I caught Quinn Hughes last Friday while broadcasting Michigan-Penn State, the fourth-rated North American skater, and though the Wolverines won, 4-0, he wasn’t at his best that night. He made some subtle, simple plays to protect the puck well, but he also made some higher-risk plays that resulted in turnovers and odd-man rushes the other way. The players from that game I was most impressed with were Josh Norris, San Jose’s first round draft pick last June, and Joseph Ceccone, a 21-year-old right-shot fifth round Dallas pick from 2015 who won a gold medal at last year’s World Junior Championship. 19-year-old Defenseman Cole Hults, Los Angeles’ fifth round draft pick in 2017, didn’t stand out a ton but did jump into the play multiple times and has put together a really impressive freshman season with a high octane Nittany Lions team and was a late U.S. cut from this past world juniors tournament. 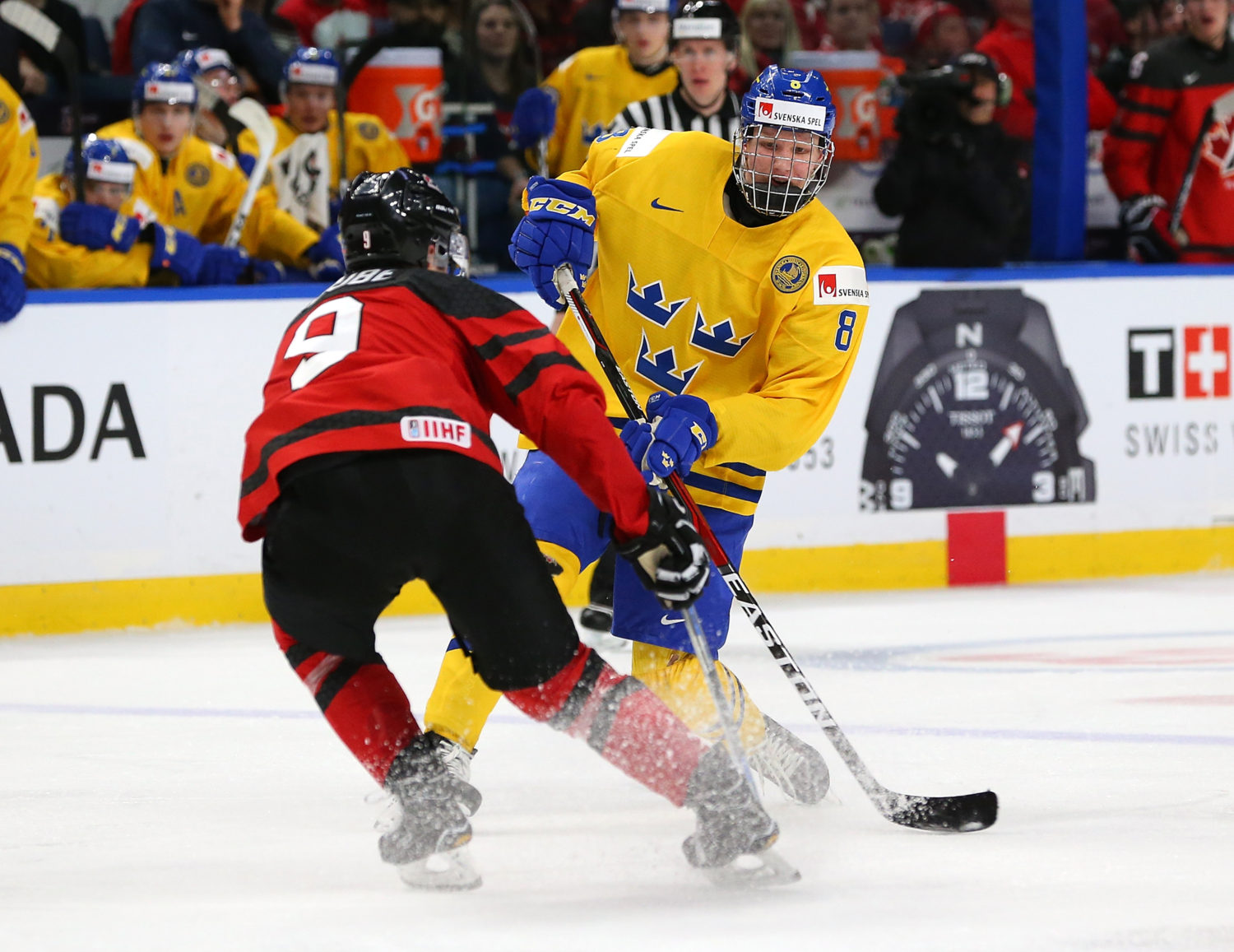