Waking up with the Kings: January 5 - LA Kings Insider

I’m not sure if it represents the collective spirit at ice level, but there seemed to be good momentum heading into Thursday’s game. The Kings have been a good road team this season, and while there had been some earlier inconsistencies, their back-to-back wins over Vancouver and Edmonton were both delivered with quality performances in which the team’s game appeared to be trending well and didn’t show any signs of changing direction starkly. Los Angeles jumped out to an excellent start and played with a very good pace through the first 10 minutes, where they banked on Derek Forbort netting a fortunate goal. Calgary then asserted itself, and though their deficit was doubled by a Tanner Pearson goal against the run of play, thoroughly dominated L.A. in the second period to a degree that we hadn’t seen this season. Even during Tampa Bay’s four-goal first period outburst, there was still a balanced amount of action at the other end of the ice. Only Vegas’ first period at T-Mobile Arena comes somewhat close to the mid-game display at Scotiabank Saddledome. It was an in-game representation of the five-on-zero practice drills that are run from time to time during the season. There wasn’t any singular commonality; chances were created and pucks were worked to the goalmouth off the rush, off point shots and rebounds, off a commitment by the Flames to win puck battles and outskate their opponent, all against shoddy defensive zone coverage and in-zone play. This is a credit to the Flames, who have been better at five-on-five than may have been recognized this season and are able to utilize one of the league’s deeper and mobile defensive corps. After recording 13 of the first 16 shots, Los Angeles yielded 38 of the remaining 56. Even with Jonathan Quick, it’s hard to win a game in which 41 shots on goal are directed at your net. 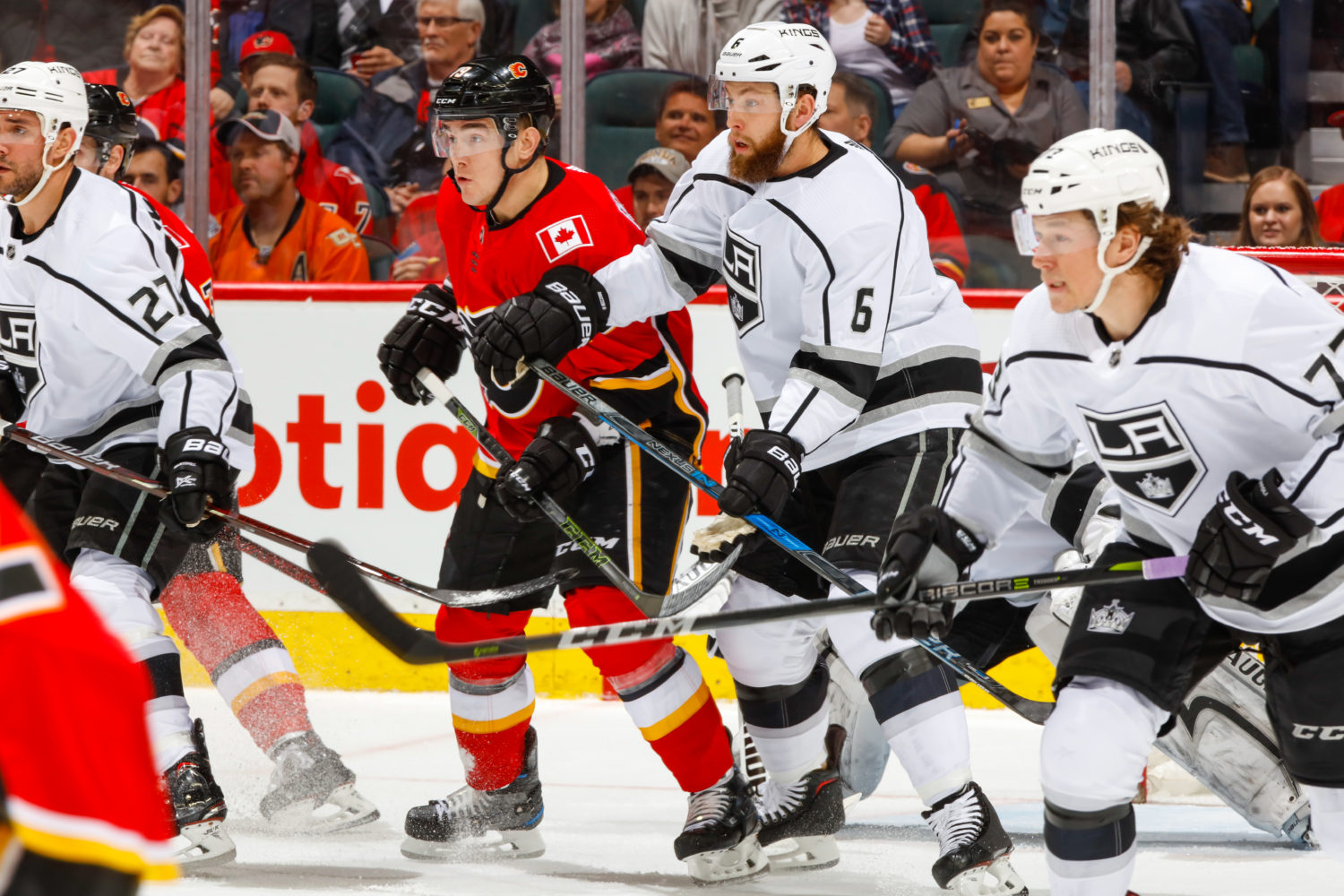 When Tanner Pearson unleashed a sharp wristshot from the middle of the slot that a leaning Cam Talbot swallowed up on Tuesday, it was yet another cruel example of a player who has been able to find space in high-potential areas but has been disproportionately stymied by goaltenders this season. It was almost comical; whatever shrunken head Voodoo doll that Pearson had brought back from off-season travels continued to inflict a market correction of his career-long, inflated shooting percentage. That percentage began to rise once again after a two-goal, three-point performance that seemed to represent the overall health of his game, even when he hadn’t been scoring. It also seemed to take a step towards solidifying his presence aside Anze Kopitar and Dustin Brown in the wake of the decision to give Alex Iafallo a little bit of a breather at this point in the season. It was the best line (the only line?) the Kings had going on Thursday. Pearson, Kopitar and Brown was the only group to approach even possession at five-on-five play, a situation thoroughly lost by the team in a game in which they were out-attempted 65-39 at five-on-five. 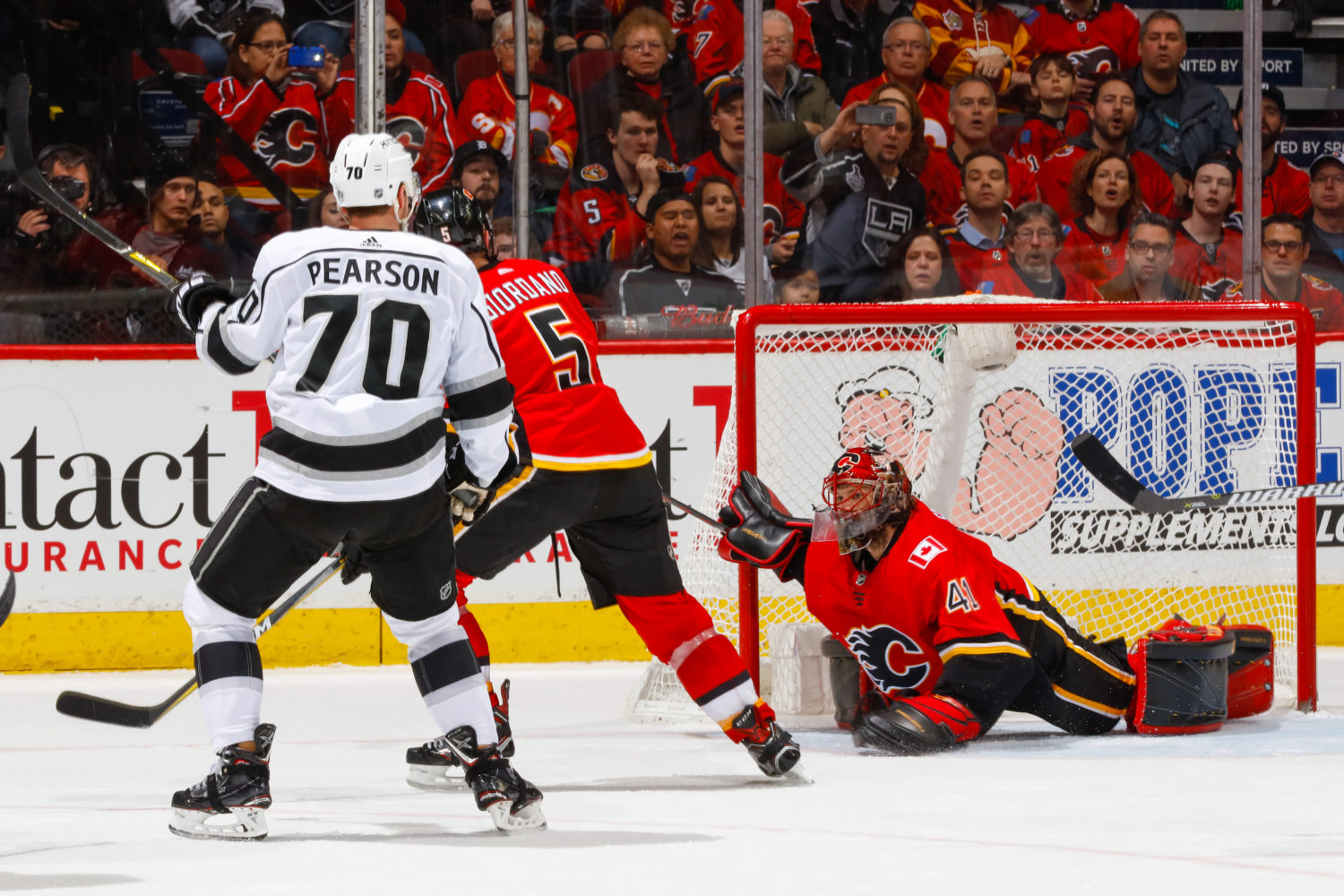 Christian Folin is approaching a return, so changes to the defensive group are imminent. There are still some holes on the back end, an observation made more clear with both Kurtis MacDermid and Oscar Fantenberg having rough nights and finishing with under 12 minutes of playing time. It’s approaching broken record-like repetition, but the Kings need another quality defender to add to their stable more than probably any other target at this point of the season. It’s commendable how Stevens has gotten quite a bit out of the current group and remains in robust health in the Pacific Division standings. It’s probable that Paul LaDue will join the mix in the second half, but while he’s put up strong numbers in the American Hockey League, a number of the reports I’ve heard back from Ontario have been lukewarm rather than gushing. He’ll still be able to help this team out tangibly, and as a right-shooting defenseman, he’ll ultimately be a solid option for a team that could use the lineup balance. Really, it just heightens the need for this team to trade for a defenseman, lest they want to approach the stretch run (and a potential Pacific Division playoff series) choosing between MacDermid, Fantenberg, Kevin Gravel and others who’ve held down the fort admirably but have never played in the Stanley Cup Playoffs. 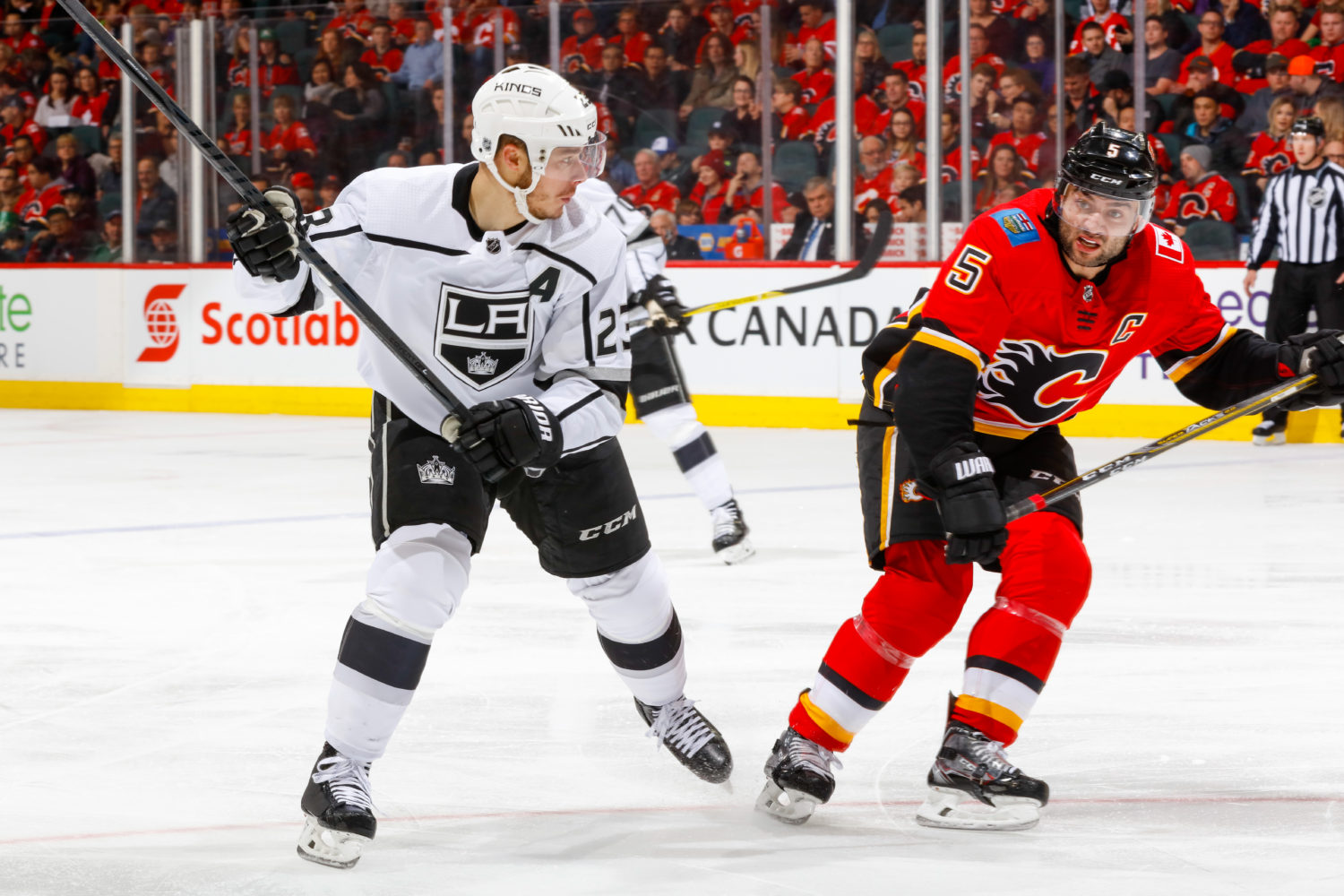