Good afternoon from San Jose, Insiders. During the morning skate in advance of the final game before the Christmas break, the Kings aligned as such:

-The vitals: Jonathan Quick left the ice first and is expected to start in net. (He was followed shortly thereafter by Darcy Kuemper). Kyle Clifford, Jussi Jokinen and Kevin Gravel remained on the ice for extra work, so they’re likely out tonight.

-The Sharks’ vitals: Logan Couture (concussion) is out, while Barclay Goodrow (lower-body) is on injured reserve. Paul Martin (ankle), on a conditioning assignment with the AHL’s Barracuda, apparently missed last night’s game with the flu and won’t play tonight. Jannik Hansen will reprise a role he held with Vancouver, and skate to the left of Joe Thornton and Joe Pavelski, instead of Henrik and Daniel Sedin. Via Paul Gackle, San Jose is expected to line up down the middle with Thornton, Tomas Hertl, Chris Tierney and Joel Ward. As always, expect the Sharks to utilize versatile wings capable of stepping in to take important faceoffs in different situations.

-A Christian Folin update, courtesy of John Stevens: “I wouldn’t call him ‘day-to-day.’ I would say he’s probably ‘days’ away from playing. He hasn’t really started skating again yet, but we’ve got the break coming here. We want to just let everything settle down, get him going again after the break. I would hope he starts skating after the break, but we’ll see.”

-A Jeff Carter update: He is not close to returning to skate in any capacity. When he is close to skating, that’s when these updates will have a bit more depth. As such, there’s no real update here. He’s still looking like he’ll be the equivalent of a trade deadline pick-up.

-A Gabriel Vilardi update: He is still expected to be cleared for game action on December 28. The Windsor Spitfires play in Sarnia that day. I believe this was first noted in recent weeks by Jim Parker of the Windsor Star.

-Another Dustin Brown quote that didn’t fully make it into Thursday’s story but I kind of wish it had: “Guys like Lappy and Matty Norstrom, they made a big difference. There are so many people that help you along the way, and it’s a little overwhelming when you think about it, because that was one year, Lappy, right? And then it’s like now, I’m on the other side of it trying to help younger guys. It’s kind of an interesting journey. You don’t really think of it [big picture]. You come in and you do your job, you work to work, day-to-day, and then year-to-year. You reminisce about the years we won, talk about how we want to get back there. There’s been some real highs, and personal lows and team lows that you kind of go through, and it’s just trying to learn from it all.”

-San Jose is somewhat similar to last year’s Kings. They’re physical, they’re defensive minded, they channel shot attempts and scoring opportunities away from the center of the ice, and are simply a stringy hockey club that averages 2.47 goals-against per game, close behind Los Angeles’ league-best 2.34. The Kings and Sharks penalty killing rates rank first and second in the league, while San Jose allows the third fewest shots per game and is in the top-10 in scoring chances against per game, according to Natural Stat Trick.

“They’re one of the best defensive teams in the league with stats, and obviously we know Joner (Martin Jones) really well and he’s a good goalie for them, but I think they just do a really good job of protecting the middle part of the ice,” Brown said. “I think it’s a little bit of a different look for them. Really in years past they’re always pretty high-scoring, really high offensive teams, and this year they kind of did a role-reversal. I mean, they beat us on our home ice 2-1 and those are the types of games that good teams win.”

The Sharks’ power play has been remarkably hot recently, going 12-33 over their last seven games, a stretch in which they’ve scored at least one power play goal in each game played. And though they’re not a high-scoring even strength team – Justin Braun is their leading 5×5 scorer, followed by Joonas Donskoi – opponents always have to be prepared for heavily sustained pressure, especially early in games at the SAP Center.

-The dreaded game before the Christmas break. It’s a trap date for all 31 teams across the NHL.

“I mean, it’s good we’re playing these guys. I think that builds the rivalry,” Trevor Lewis said. “And I think maybe if we’re playing an eastern team it might be a little bit different, but I think we always get up for division games, especially these guys, since we’ve played them so much.”

If one harkens back to the semi-memorable season of 2016-17, they might recall that the Kings headed into the Christmas break having played six straight on the road. The fifth of those six games was against the Predators, who were playing in their final pre-break game and had one foot on the plane by the time the Kings doubled their lead to 2-0 early in the third period. The game ended as a 4-0 L.A. win.

“It shouldn’t matter who we’re playing before Christmas,” Jake Muzzin said. “But, we’ve got a chance to get two points tonight and put ourselves in a good position going into Christmas break and that’s what we’re looking to do.”

Brown noted that the SAP Center is always one of his favorite places to play and has a hostile atmosphere that can quickly jar any holiday complacency out of San Jose’s California rivals.

“It’s a divisional game with a team that we have battled against for the last few years,” he said. “Kind of went through a sleeper [on Thursday] because it was a team we hadn’t seen yet, a team we don’t really play that often. It’s important for us, for our focus to be on this game, having it against a divisional opponent against a team that has mutual hatred. I think that helps keep our focus on the game at hand and not look forward to the break or any of that sort of thing.”

-Tonight’s officials are referees Trevor Hanson and Steve Kozari and linesmen Kiel Murchison and Travis Gawryletz. Because the Kings will follow the avian match-up between the Ducks and Penguins on FOX Sports West, there will be a very abbreviated pre-game show. Puck drop is at 7:00 p.m. Thank you for reading, Insiders. 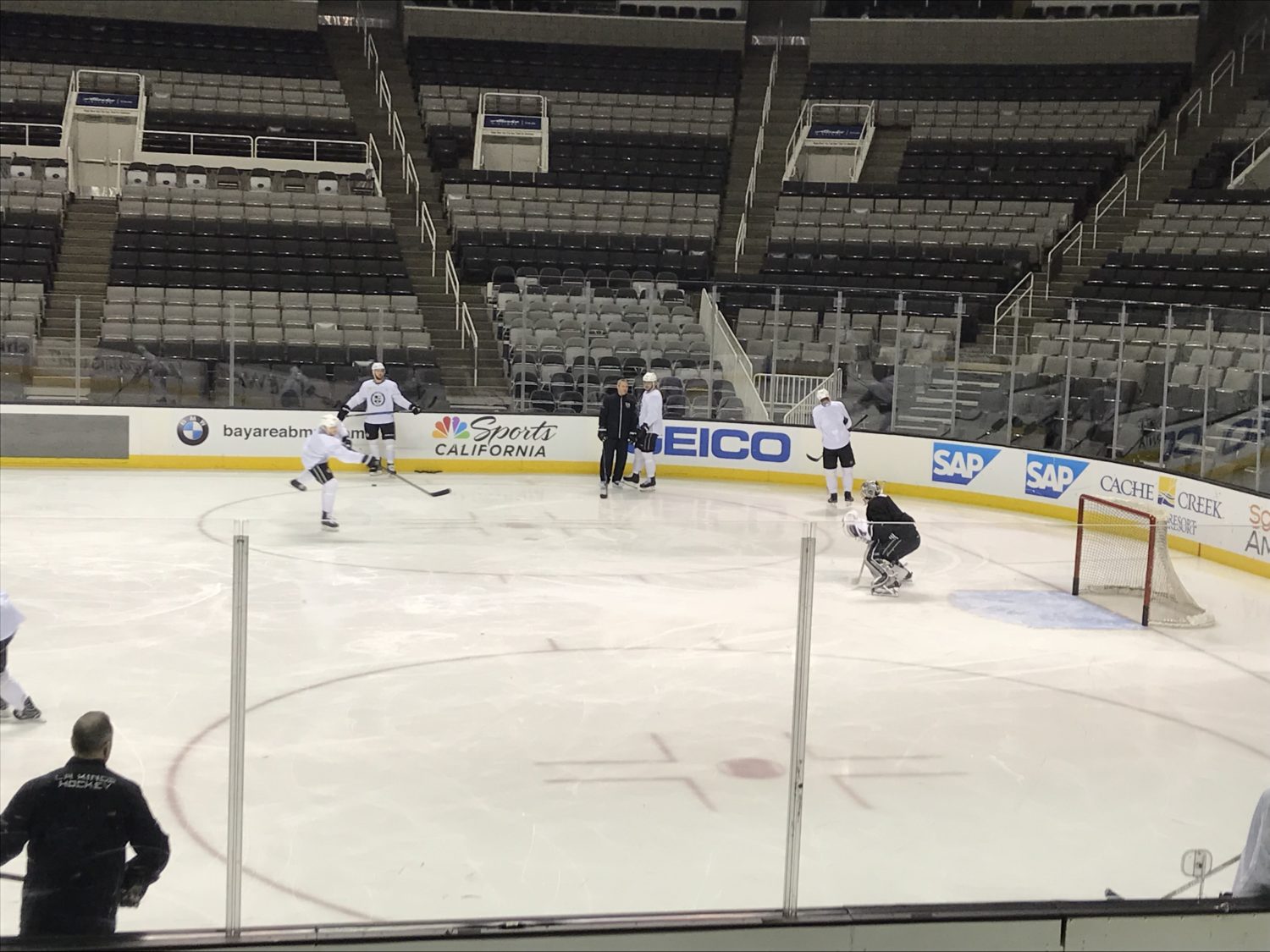