Waking up with the Kings: December 13 - LA Kings Insider

Jeez, three paragraphs are needed from last night’s game, eh? I’m not sure what else there is to say, other than the Kings simply didn’t have it. There are several excuses of Why They Didn’t Have It that could be shared in this space, but there are were two primary factors that combined to produce unfavorable circumstances heading into the game. First, Los Angeles, though they had won eight in a row, were not quite clicking at the end of the streak as they were in, say, the 4-1 win at St. Louis. The Dustin Brown quote, which has been used about 230 times already this season, applies here. The third period of the Carolina game didn’t exactly provide a smooth segue into the start of the road trip. Secondly, New Jersey is a much improved team this year, and in a post-game press conference after a 5-2 loss to the New York Rangers, John Hynes had repeatedly, and with purpose, called his team’s performance “loose” and “soft.” He was not a happy coach! The Kings, as well as those covering the team, were aware that the visitors would likely face a top performance from a 16-9-4 team, and, well, we all saw what happened. There’s not a great deal to share from the game, other than they had their hats handed to them and their lunch money taken from them. Onward and upward. 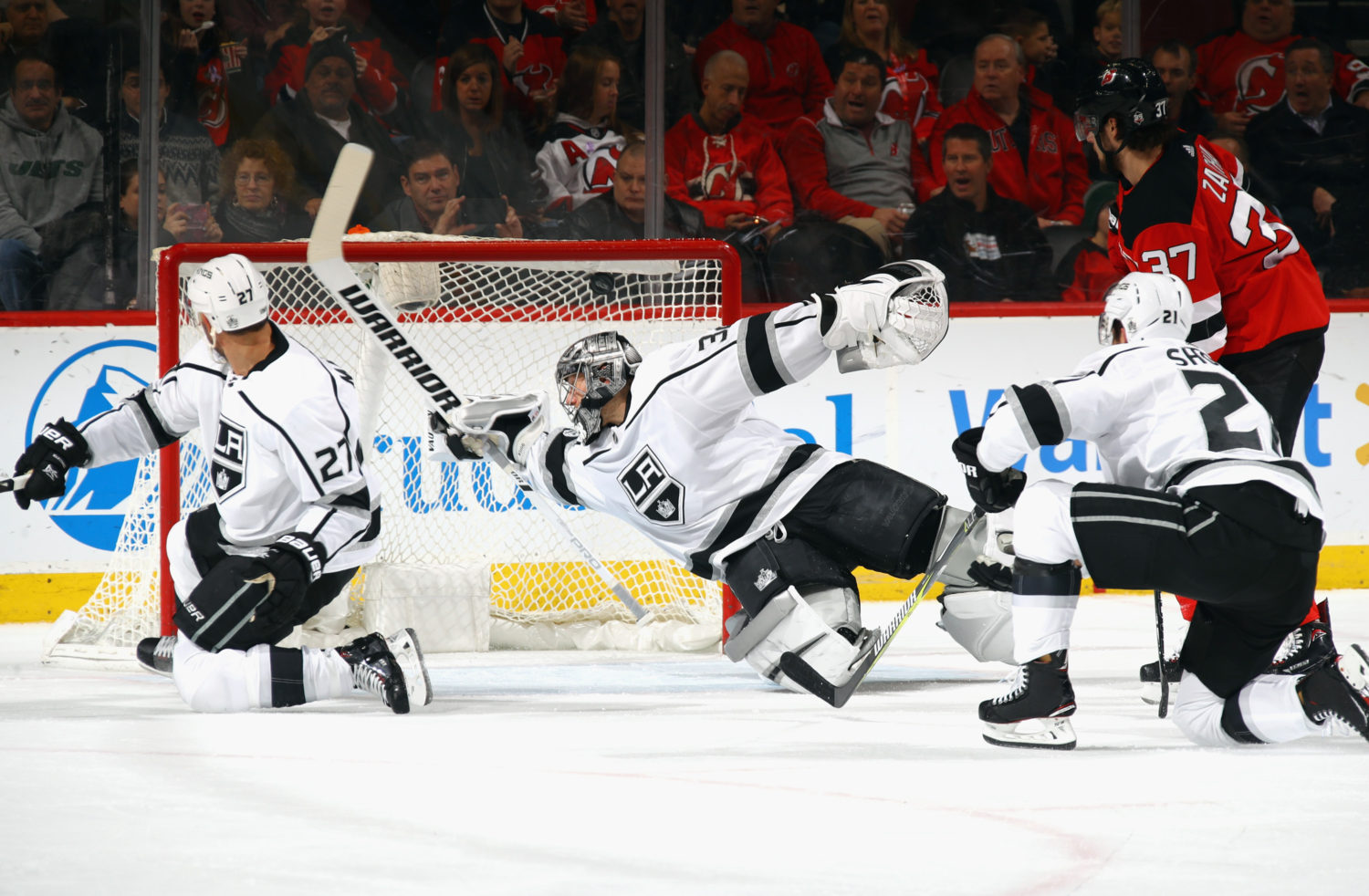 There haven’t been a great deal of games recently in which Jeff Carter’s presence left a big hole in the lineup (see: eight-game winning streak), but in certain losses, it’s a glaring issue. Before diving a touch deeper, the loss Tuesday was not on any individual. The team game was not up to snuff, and Carter isn’t going to significantly make up the possession difference when Los Angeles finishes with a paltry 34 shot attempts. There were a number of players who weren’t on their game, and for a number of fans, Nick Shore’s first period decisionmaking drew ire. I haven’t seen a replay of this play since it unfolded in real time, so I’m going off memory here, but Shore does like his drop passes, and in leading a two-on-one-slash-three-on-two rush, it appeared that he didn’t sense he could offer a direct cross-slot feed to the forward and instead offered a drop to the trailer on the play. That’s a fine decision; John Stevens wants numbers up on the rush. He’s looking for defensemen to activate, and there’s no issue with that original pass. I’m just not sure if Shore was expecting to receive the immediate return pass, and instead of snapping off a quick shot, skated into a negative angle, where his next option was to distribute the puck back to the point. It’s hard to not get a shot attempt off on a three-on-two in an early scoreless game. It’s a tough break, because Shore’s playmaking and confidence in the offensive zone appeared to be trending well at the outset of the recent home stand, when he assisted on Jake Muzzin’s goal and Stevens noted that he had graded well in the game the next morning. “I think Shoresy’s hockey intelligence is one of his big assets, and I think when he has intensity in his game – which he had [last Tuesday] – it allows him to be a good player,” Stevens said on December 6. “We all think he can make plays. He was certainly a guy that was really good at creating offense as a college player, and he did it in the minors, and we think he can do it here.” But even if Shore pots one there, or even if Dustin Brown scores on the shorthanded breakaway to change the trajectory of the game, Los Angeles still likely walks out of the Prudential Center with a defeat, because their team game was not in order. The loss wasn’t on any one or two players, it was on the entire team. 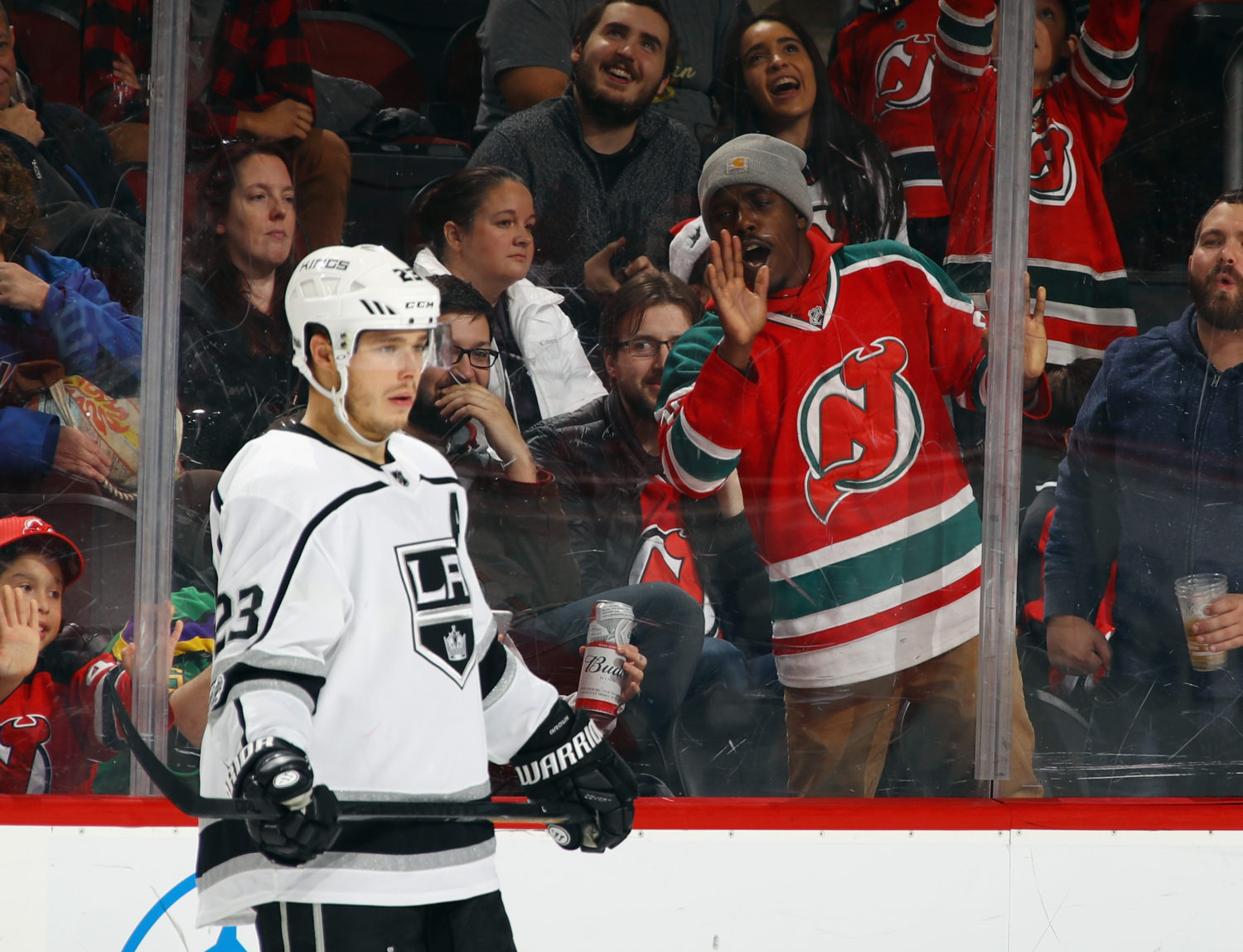 Taylor Hall entered the game with five goals, 13 points and a minus-six rating in 21 career games against Los Angeles, and those numbers may even present a generous case of what he showed with an Edmonton team that, admittedly, was not good and did not inflate his numbers against a Kings team in its championship cycle during much of his Western Conference tenure. His performance on Tuesday far outshone any of his prior outings against Los Angeles. He was fast on pucks, dangerous on the rush and scored two goals, the second of which displayed an impressive burst of speed in which he eliminated the amount of time Jake Muzzin thought he had with the puck and skated in alone on a breakaway before tucking the puck between Jonathan Quick’s legs. He’s also still being looked at after Kurtis MacDermid’s leg-on-leg hit and may not travel with the Devils today. I don’t know him personally, and can’t vouch for any of the perceived leadership rungs he has been expected to reach as a former number one overall pick, but just as a casual observer watching a player who has a lot to offer in terms of speed, skill and goal scoring ability, it would be nice to see him let loose in the playoffs and see what he can do. 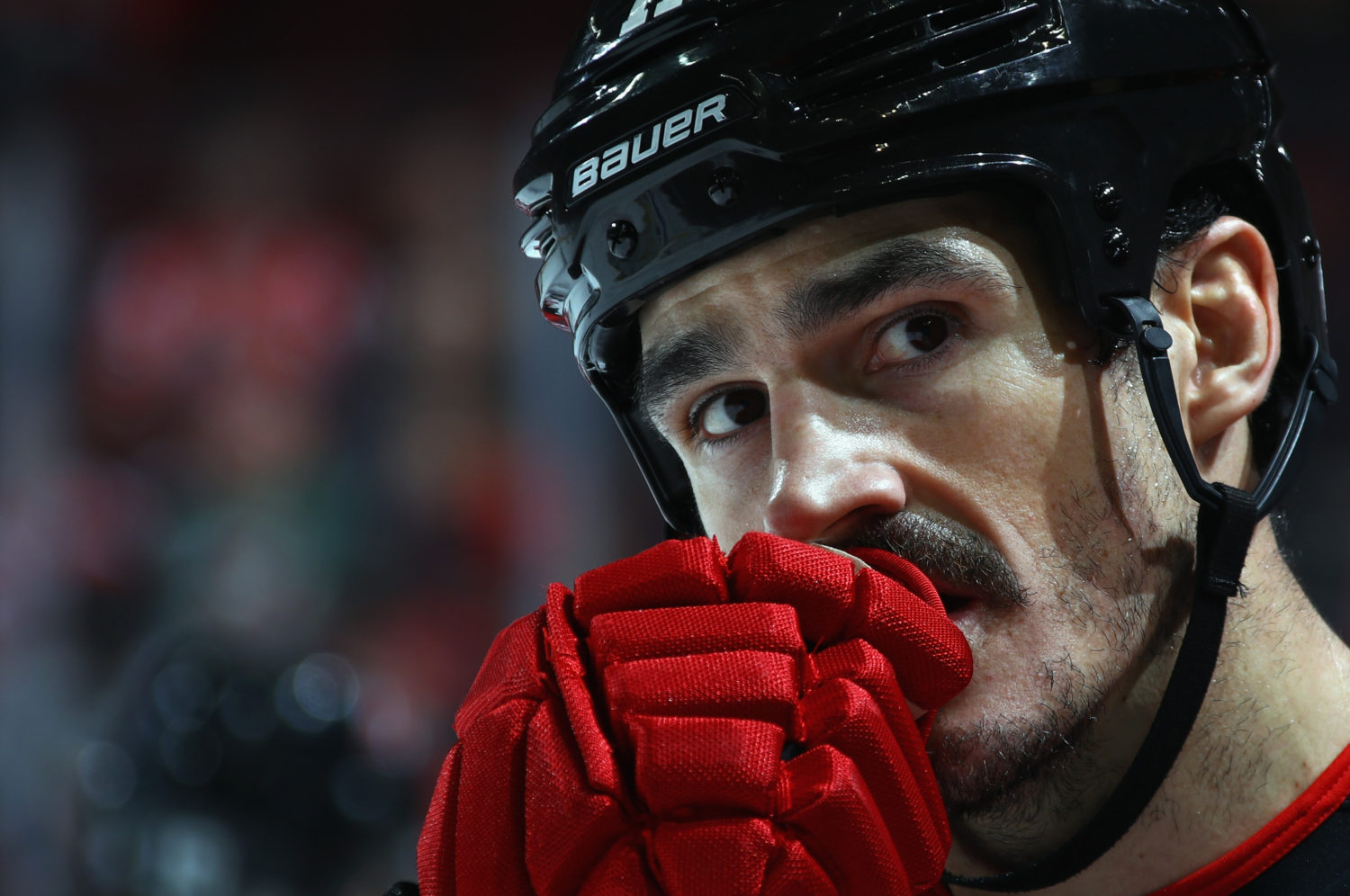 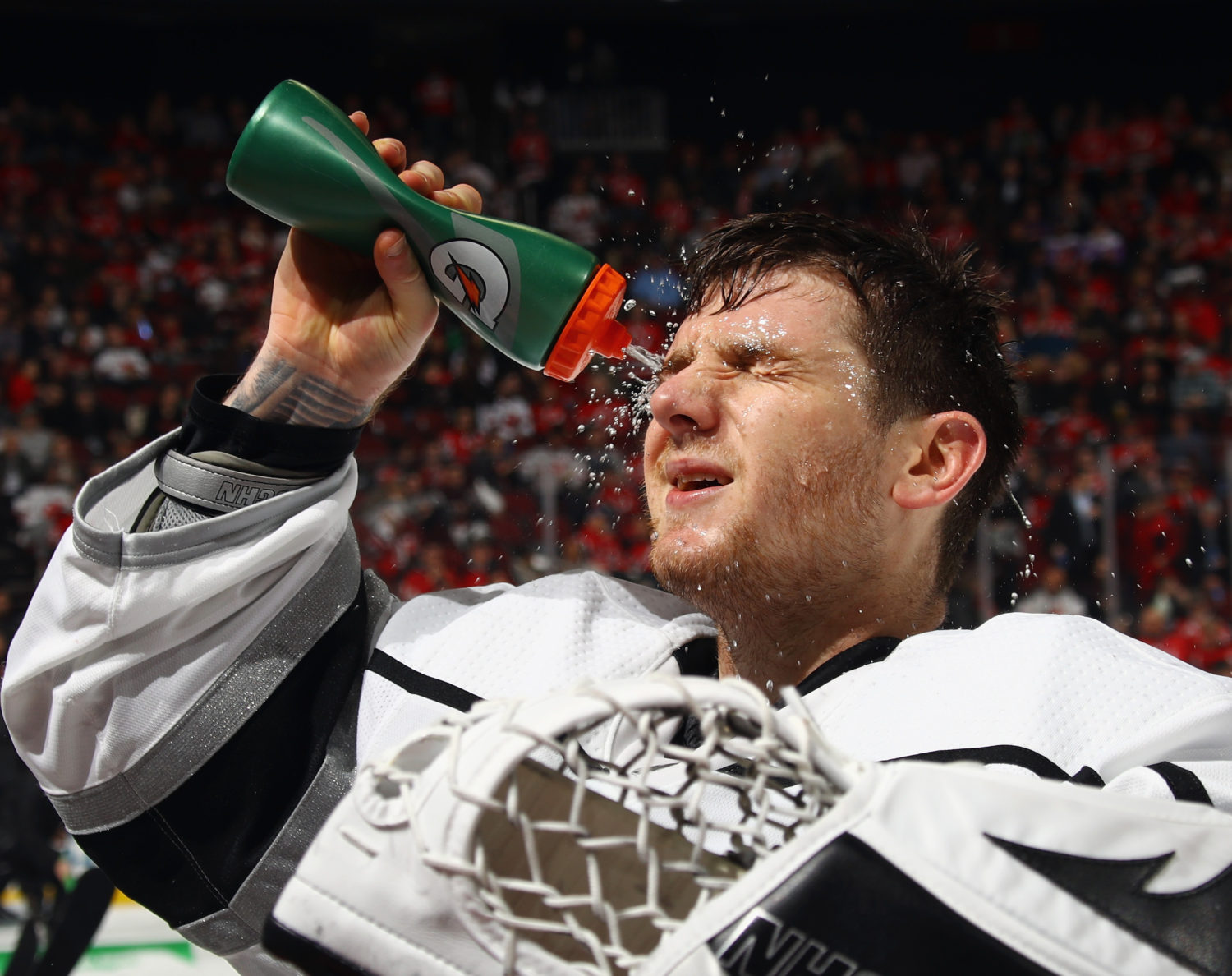 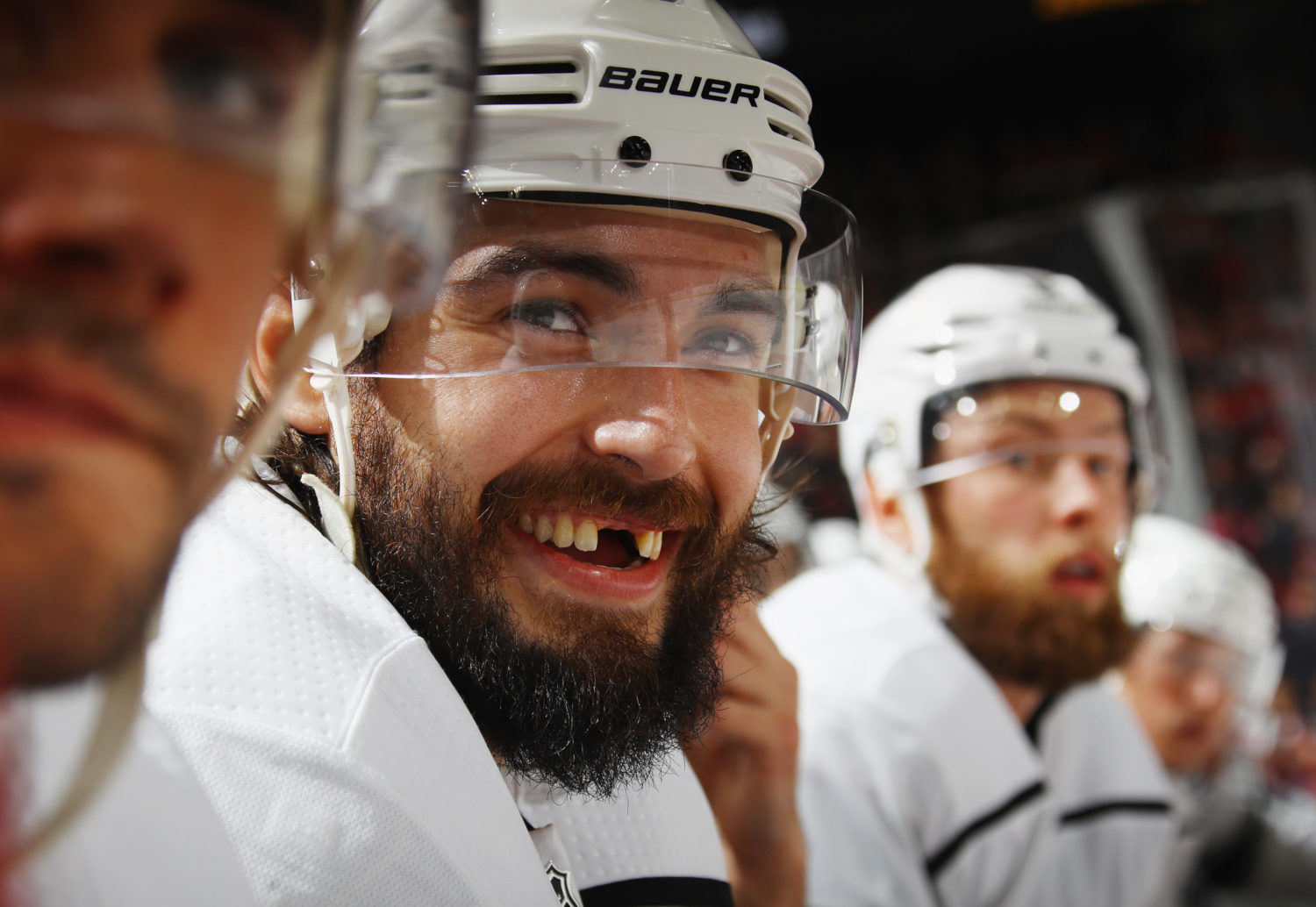