Waking up with the Kings: December 2 - LA Kings Insider

The Los Angeles Kings scored twice before the game’s first TV timeout on Friday night. Is that good? With a performance that represented the continued the swell in their team game, they jumped out to an early lead and, after the St. Louis Blues pulled within one in the second period, received an important late second period dagger that re-established the two-goal difference. From then, they used a committed team-wide effort that kept the hosts off the scoreboard in the third in widening their impressive late-game goal differential. It’s time to revisit the February, 2013 Dustin Brown quote, because it applies here. “Let’s just say we haven’t been playing our best hockey, and sometimes you say at the end of losing streaks and at the end of winning streaks, sometimes you’re losing games you shouldn’t, and sometimes you’re winning games you shouldn’t, as well,” he said after the Kings put up 47 shots at Joe Louis Arena but fell to the Red Wings, 3-2, on a goal in the final seconds. Towards the end of the Kings’ winning streak this season, they weren’t playing great hockey, but Jonathan Quick and Darcy Kuemper were bailing them out. And though Los Angeles went through an extended November rut, something appeared to change late in their doldrums. I thought they played a really solid game in the narrow loss to Winnipeg, and though that was followed by a so-so outing at Arizona, they’ve by and large built a crescendo in their game that has culminated with a four game winning streak, the final three games of which they’ve won on the road to give themselves the opportunity to cap off a tremendous road trip Sunday night at the United Center. 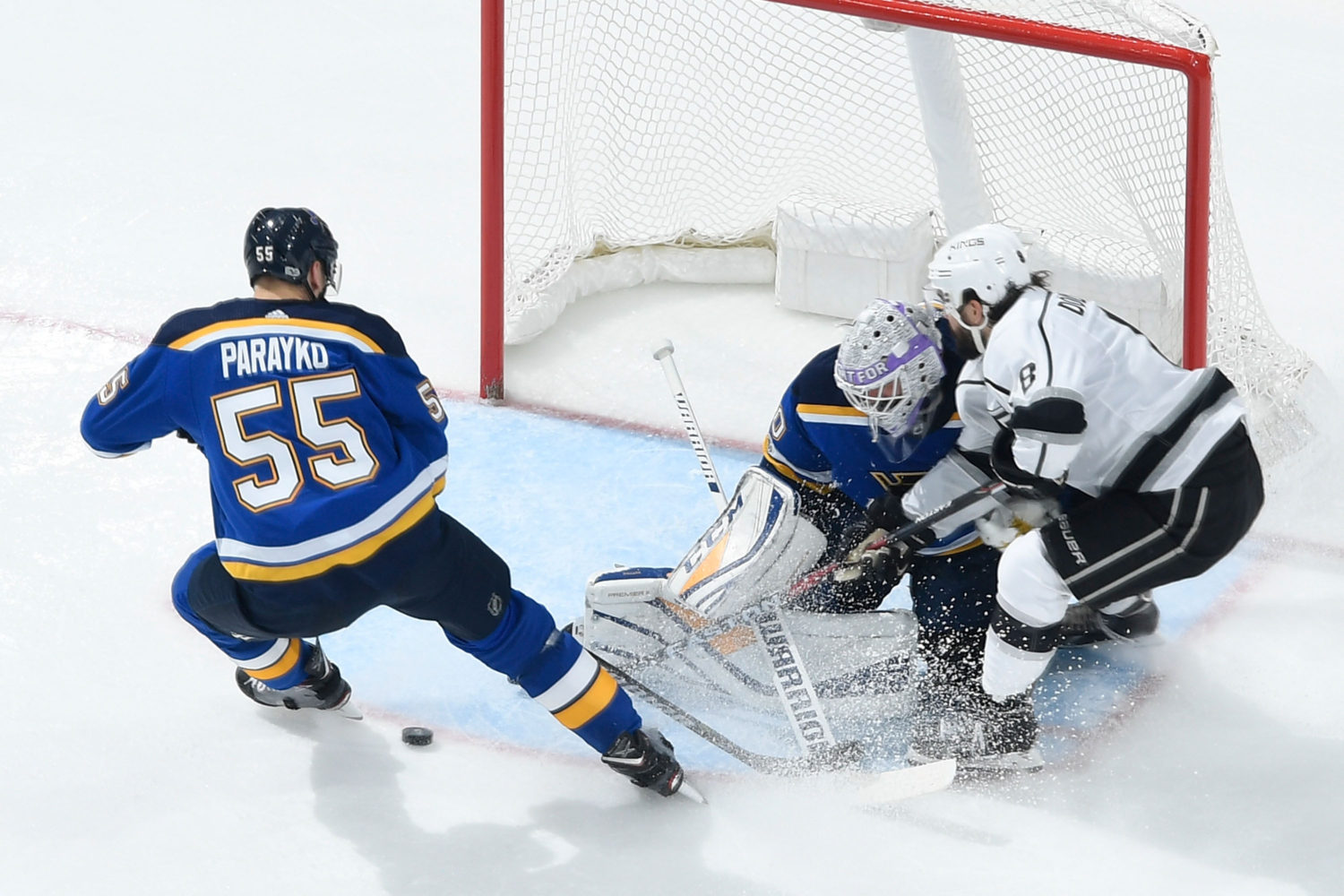 The game was well punctuated. For the third time in three games on the trip, the Kings exited the second period with a lead. They’ve outscored their opponents 5-0 in third periods on the trip, lifting their goal differential over the final 20 minutes of regulation to an impressive +21. They’ve outshot the Red Wings, Capitals and Blues 26-24 in these late-game situations. Yada, yada, yada. But it’s important, in protecting multi-goal third period leads, to not cede an early goal. St. Louis had an opportunity to cut into the Los Angeles lead with an early third period power play, and the Kings didn’t allow much more than a few sniffs at the net in an impressive display. Darcy Kuemper was called upon to make one of his six saves on Vladimir Tarasenko during the kill, but there were no shots that came within 25 feet of the net. From there, L.A. really seemed to build off a successive string of shifts in which all players were involved and contributing, and it resulted in Tanner Pearson – who had another strong night at the Scottrade Center – pressuring Vince Dunn and Colton Parayko into a fumbled hand-off, resulting in a quick-strike as he issued a heads-up puck towards Tyler Toffoli, who crashed the net and stuffed it past Jake Allen. In the final 20 minutes, Adrian Kempe had seven shifts. Jonny Brodzinski had six. Kurtis MacDermid jumped over the boards eight times. For four rookies to get regular shifts in the third period of a game against the team that (at the time) led the Western Conference, and to come away with a win, is a boon for the confidence of the young players and the balance in which John Stevens allots his minutes. It also kept Drew Doughty and Anze Kopitar well below their average usage on the second night of a back-to-back. 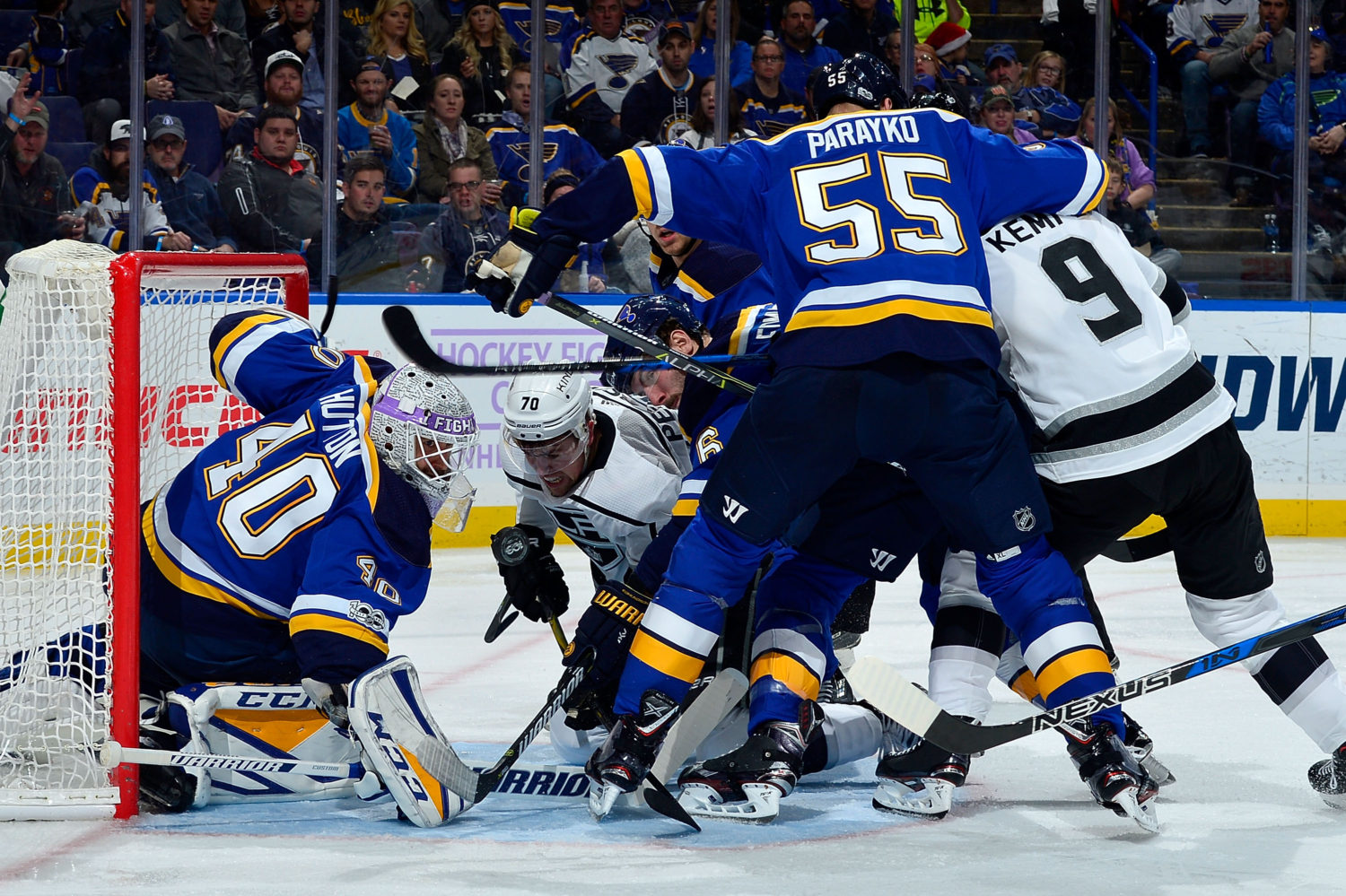 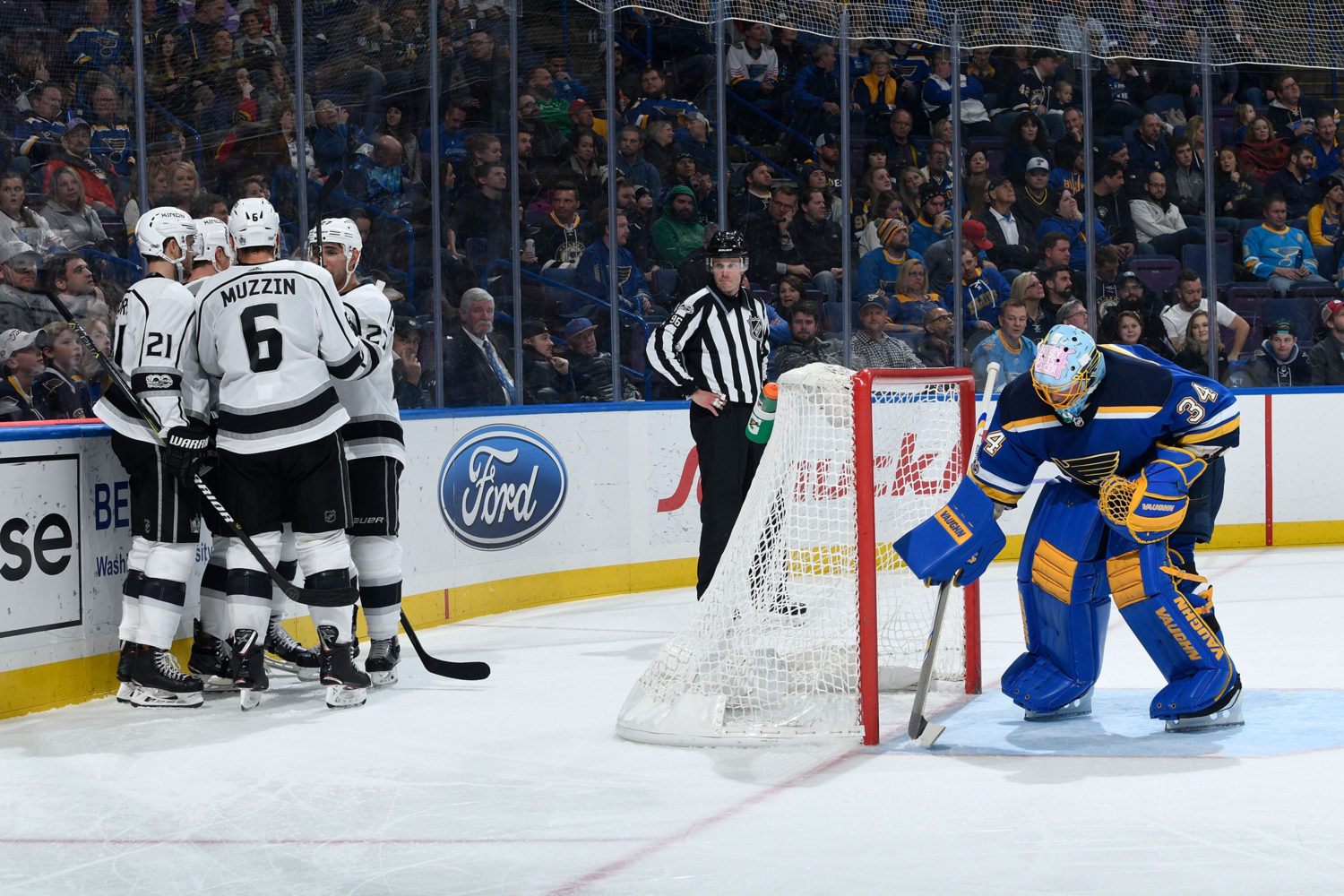