Christian Folin, on earning one point from the overtime loss:
We did a good job coming back in the third, obviously. I think that was the best part of our game in the third. We came out right away and played really well, the way we should be playing all night.

Folin, on whether his fake rim-around, shot-on-net goal was planned:
Dave was talking about it during the second period. Let’s waste one, fire one at the net because he was going out to play the puck really early. It was in my mind, and I just decided to shoot and try it. [Reporter: Had you ever seen a goal like that?] Yeah, one of my teammates did it in college, actually. It had the same problem – the goalies were just going out and playing everything. They were leaving the net early, so we just decided to throw one in there. I mean, after that, I think we got a lot better pressure because he was staying back in his net and he wasn’t jumping out and everything.

Folin, on what was said during the second intermission:
We just talked about that it was a good challenge for our team. We hadn’t played that well so far in the game and we wanted to come out and play really well in the third.

Folin, on whether the team is happy to get a point from the game:
Yeah, well, we didn’t play well enough in the first two periods. But, obviously, it’s a tough opponent. They did really well last year, so it was important for us to come back and tie the game. I wish we would’ve won it in overtime, but you can’t win them all. 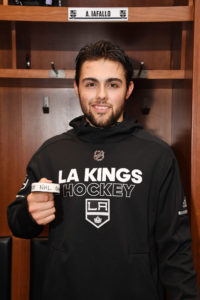 Alex Iafallo, on his first goal:
[joined in progress]…it’ll be pretty cool to say that I got a pass to a wide open net from Kopitar, so it was pretty special. [Reporter: It couldn’t have been much easier. Basically, a slam dunk.] Yeah, I just had to put it in. But, yeah, I finally got a weight lifted off the back. A tough way to lose, but I feel like we battled hard, and I’ve just got to keep working hard.

Iafallo, on any irony that after generating a lot of chances his first goal was scored in an open net:
Yeah, oh yeah. I knew it was coming. Everybody was saying it to me, so I’m just glad it went in. It’s a pretty special feeling. I just wanted to stay positive and keep doing positive things out there and good things will happen.

Iafallo, on whether not having scored weighed on him despite his quality play:
A little bit, yeah. I knew it was going to come. I just wanted to make sure I just played the game and didn’t worry about scoring too much. Just play normal and just be a good teammate. I’m glad it finally went in.

Iafallo, on the wave of offensive chances in the third period:
Yeah, everything – I mean, that’s just how the game goes sometimes. You get some good waves. Just had a lot of good plays, especially from the start of the third. I think that’s what we were kind of happy about. It’s a tough overtime loss, but we battled back at least, so we’ve just got to remember what we did and keep staying positive.