There’s not much more to read here that hasn’t been said already, but the only immediately accessible frame of reference for Anze Kopitar faceoff win to set up Tyler Toffoli’s buzzer beater isn’t even in hockey. It’s Derek Fisher’s catch-and-shoot off an inbounds pass from Gary Payton with 0.4 seconds remaining on the clock in Game 5 of the Western Conference Final between the Lakers and Spurs in 2004. There have been buzzer beaters – including one memorable one that brought “coulombs” into the lexicon of Kings fans – but nothing as improbable as what we witnessed last night. The emotion and unpredictability of the event was so well captured by Alex Faust and Jim Fox, and both broadcasts were right to use the term “unbelievable.” There are certain terms, such as “miracle,” that should never be used in broadcasting unless a team of scrappy college kids beats the Soviets. “Unbelievable” is kind of a similar term, but it does capture the sheer improbability and spur-of-the-moment incredulity of a moment in which context and reference is extremely difficult to process coherently. Moments before calling the buzzer-beater, Jack Edwards of NESN said, “there’s almost zero percent chance that could happen,” and that’s a very accurate way of setting up the play. I also thought the NESN home broadcast did a terrific job of backing off momentarily and letting the play breathe so that the images could tell the story, which is something that that would only work for the broadcast of the team getting scored on. For the team that wins the game, the instinctual exclamation of such a highly unusual moment was representative of the unadulterated joy at ice level. 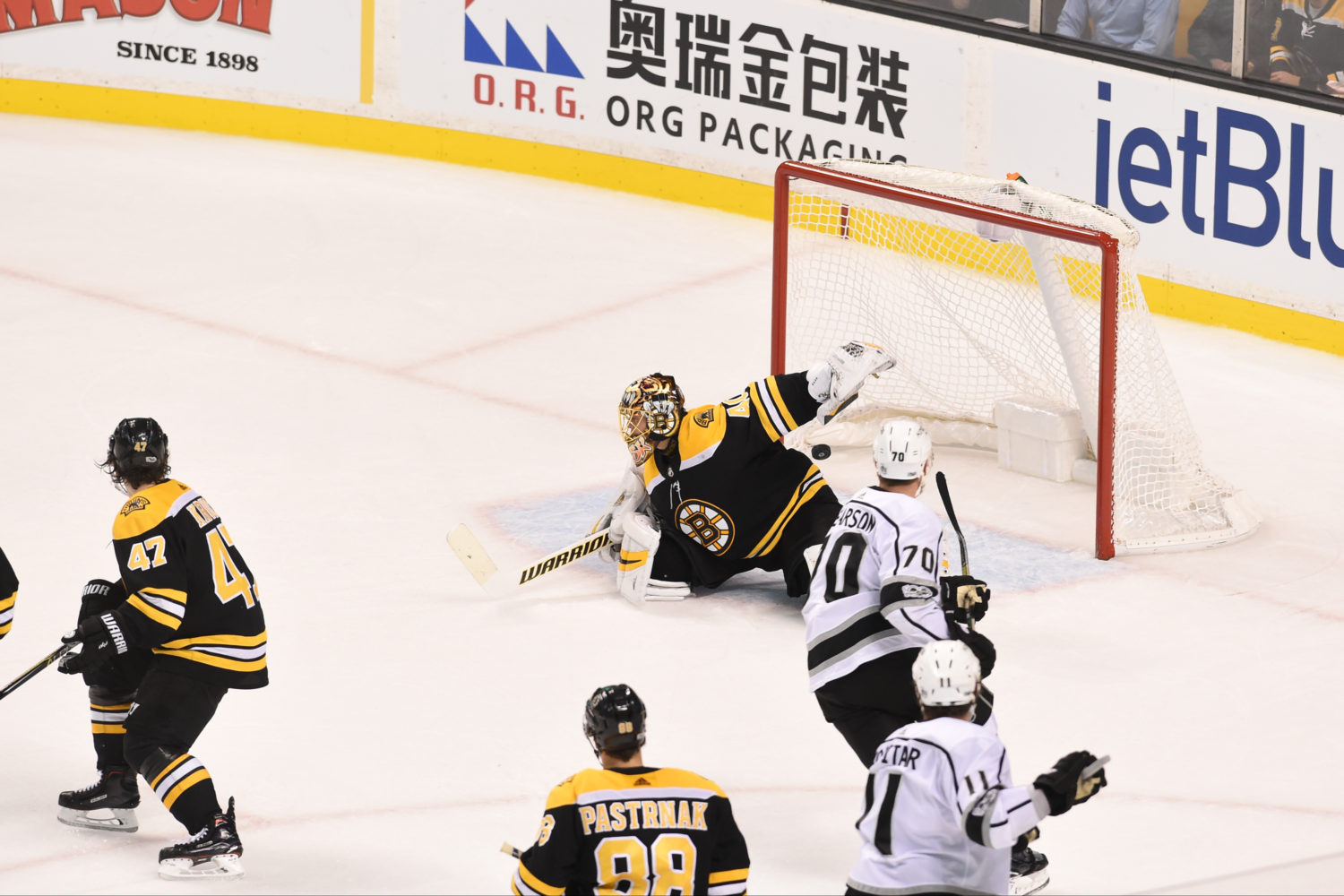 Lookin’ at you, lockdown Kings checking. Five games into a six-game trip, Los Angeles would be challenged by its physical and emotional reservoir, especially when facing a team that was on home ice and tied for the fewest games played in the league. And Boston controlled play early in the first period, using a high-speed cycle game that temporarily flummoxed L.A. on switches and resulted in an impressive Charlie McAvoy-Brad Marchand redirection. (Marchand, who has success virtually anywhere, now has 10 goals in 13 games against the Kings, a count bettered only by his tallies against Florida, Toronto, Ottawa and Buffalo.) And even as the B’s were swarming in the L.A. zone, the trajectory of the game changed on one play when Torey Krug heard Adrian Kempe’s footsteps and chose to pass the puck up the middle, where Toffoli intercepted it and patiently backhanded the puck past a prone Tuukka Rask on the Kings’ first shot. From then on, Los Angeles found legs and asserted itself well throughout the remainder of the first period. In the second, they locked the door and threw the key into Boston Harbor. The Pearson-Kempe-Toffoli line was the Kings’ best line at even strength and won a significant number of battles that helped even out a game after the more rested Bruins played with excellent pace and structure through the first eight minutes. The win was representative of the desire to create opportunities in the attacking end off airtight checking in all three zones. 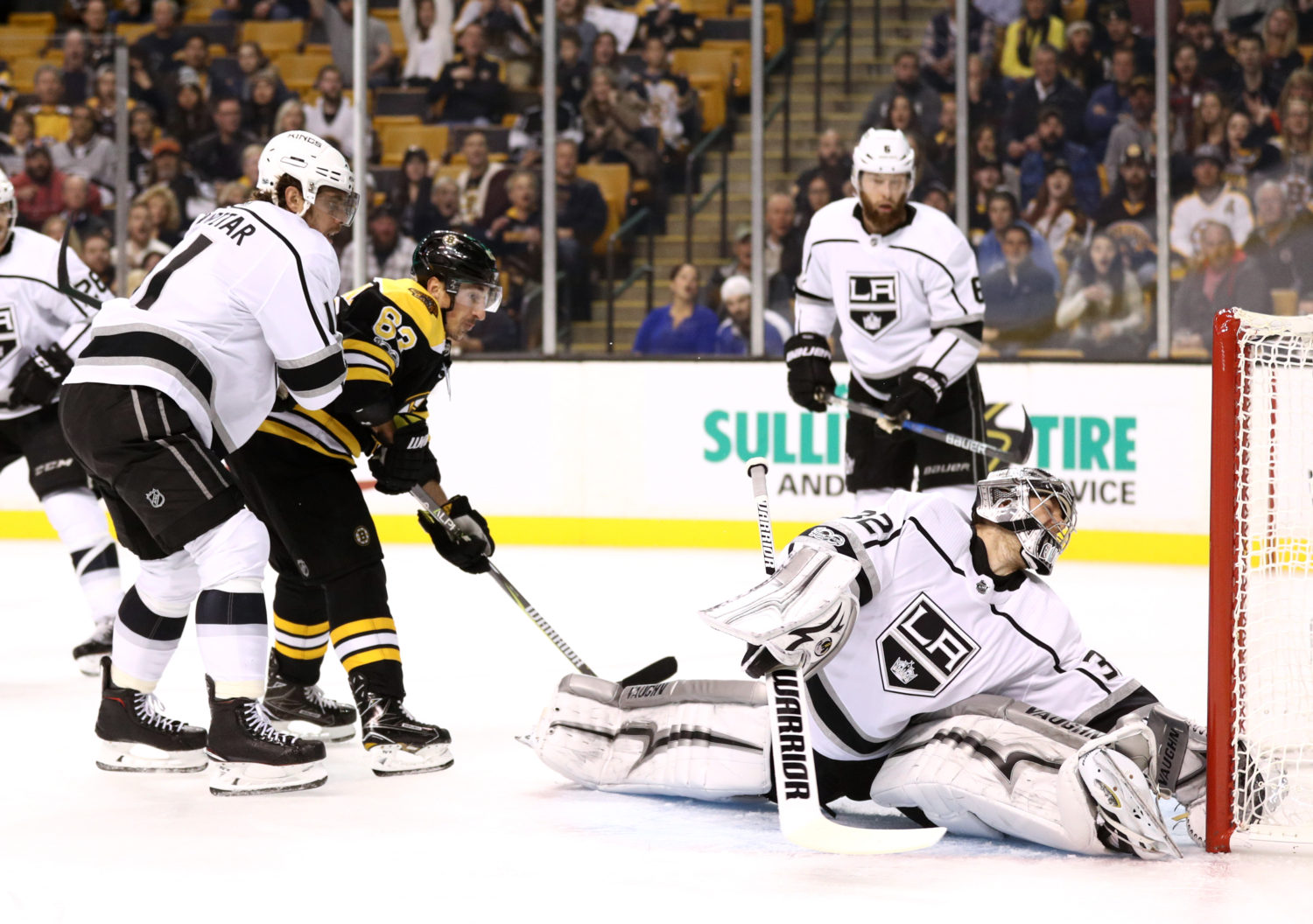 The Kopitar line was also quite good, and with another 25 minutes logged, Anze is encroaching on Drew Doughty usage. His ice time of 21:55 per game is the fourth highest average among league forwards, and if he doesn’t win that faceoff directly into a teed-up Toffoli wheelhouse, the game essentially turns into a coin flip. His line’s shift at the end of regulation was a strong demonstration of his own puck protection ability and desire to will the team to victory when he didn’t exactly have a full gas tank remaining. Alex Iafallo also gained a step on his defenders and made several notable cuts towards the goalmouth, though Rask, like Jonathan Quick, was excellent in closing the door on high-quality attempts. As noted since the dawn of time, it does seem as though Iafallo will break through relatively soon, but that’s not particularly important at the moment. The team is 9-1-1, and his presence to the left of Kopitar has balanced out the top line when there were valid questions heading into the season of who would play with Los Angeles’ captain. He was excellent in overtime, and if not for the Quick-Rask rising tide, could’ve ended the game earlier with several opportunities. An excellent early season match-up with the Blues awaits, with both teams having transitioned from their war-of-attrition heavy games into more of a hybrid style of play that reinforces checking and their defensive identities meshed with the ability to get pucks back quickly and play faster. The Kings have already etched out a terrific trip; Monday’s game has the possibility to place it in conversation of all-time franchise road trips. 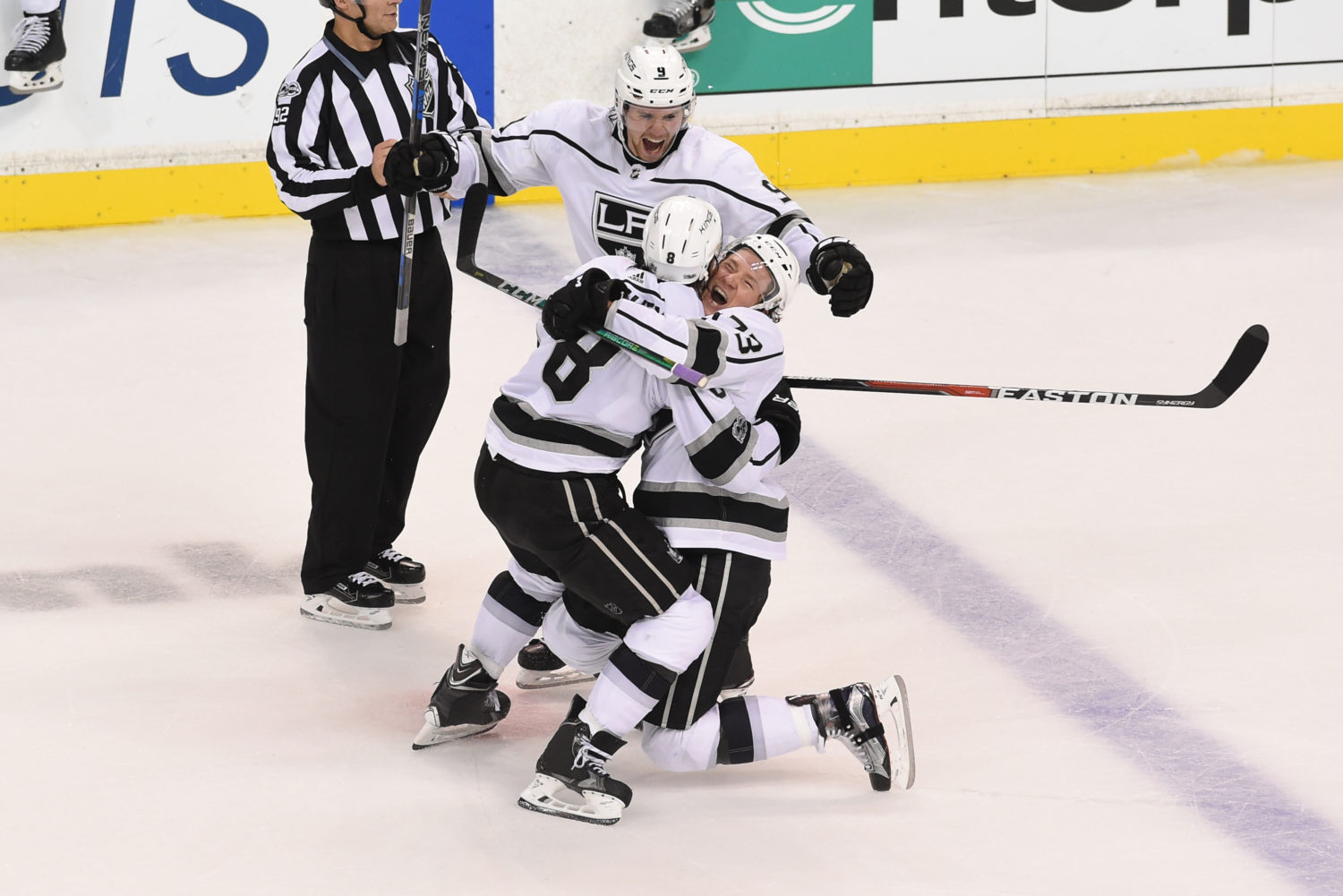