Auger pays dues, gets rewarded with a call-up

Recalled early Tuesday, Justin Auger joined the Los Angeles Kings at practice at Toyota Sports Center and skated to the right of Michael Cammalleri and Adrian Kempe during five-on-five work. With the Guelph Storm and the Ontario Reign, and during his Los Angeles preseason campaigns, the 6-foot-7 winger has been adept at doing much of the “plumbing” along the boards as a detail-oriented possession winger with good defensive awareness, but with some interesting elusiveness for a player of his size.

Earlier Tuesday, John Stevens spoke about Auger’s progression in Los Angeles’ system – the Waterloo, Ontario native spent the last three seasons with the team’s top minor league affiliate, and won the 2015 Calder Cup with the Manchester Monarchs – and the forward spoke about his own hockey background growing up just outside of Toronto.

Related: the Kings play the Maple Leafs twice in the next two and a half weeks, including a trip to the Air Canada Center next Monday.

John Stevens, on Justin Auger’s development:
Well, we’ve liked his progression since he’s come into the organization. He’s a big guy and we’ve tried to get him a step quicker, but he’s got good detail in his game. He’s got a lot of ticks and turnovers just because he moves his feet and he checks well. He’s a good penalty killer down there. I wouldn’t call him a ‘fast guy,’ but he has a way of eluding people and going by them when he has the puck. Just thought it was a different look – a big guy who’s good on the wall that can play a north-south game. We’ve liked his progression, so we thought we’d get him up and get him involved in practice and get a look at him. [Reporter: If he does get into a game at some point, is that a nice reward for a guy who spent more than 200 games in the minors?] We’re excited for any young kid that gets a chance to play. That’s why they work so hard and put in so much time. It’s kind of fun to watch the kids that come in and get a chance to play, and there have been a few this year already. If he gets a chance to play, it’d be exciting for him because it’s a long road. He played junior hockey in Guelph and I know he was excited to sign a contract and he became a good player, won a championship in the minors, and ultimately he wants to play in the National Hockey League, so we’d be excited for him if he gets a chance to play. 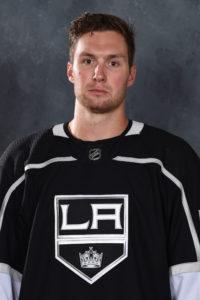 Justin Auger, on whether his training camp was a reflection of what he’d like to do in Los Angeles:
I mean, obviously I want to come in and put my best foot forward. I think everyone’s trying to make the team out of camp, but sometimes there’s just not enough spots. Other guys beat you out of spots, but getting sent down to Ontario is really positive. ‘Keep working hard and hopefully we’ll get you up here.’ Just keep working hard and eventually you’ll get your call – that kind of thing.

Auger, on whether he prefers the left or right wing:
I’ve played a lot of right wing. Last year I played a lot of left wing. Stutts liked me on the left side – my coach down in Ontario. I’m not opposed to playing either side, really.

Auger, on whether his family will be in attendance, should he debut against Montreal:
I hope so. To be honest, I haven’t heard anything. I’m not going to say anything until it’s for sure. I’m just going with the flow right now. If I do end up debuting it’d be great if they could make it, hopefully. But right now I’m just taking it day-by-day.

Auger, on whether there was anyone he modeled his game after:
I don’t know, it’s kind of tough to say. I grew up watching the Leafs a lot, being from Toronto. It was Hockey Night in Canada every Saturday night, so watching guys like Mats Sundin and those guys growing up, they were never a stellar team, but that’s the team I cheered for, being that was my hometown. I kind of like bringing my own brand. Big power forward, chip pucks in, a-work-it-down-low-kind of thing, so if I get a chance to play, that’s going to be the brand of hockey I’m going to bring. Just be solid defensively and get some energy out there, get some offensive zone time.

Auger, on memories from any Maple Leafs-Canadiens games:
I never really came from a big hockey family. My parents actually got into hockey because I got into hockey. I almost taught them the rules of the game – the offsides and the icings and all that. It was just Saturday nights, if it was just my mom and dad or whatever sitting down and watching the Leafs game. I remember one time as a kid getting tickets from a buddy and me and my dad taking the subway down and watching the Leafs on a Saturday night. That was a big deal as a kid, because in Toronto games are pretty expensive and we lived an hour away. That was a pretty good deal when I was growing up.

Auger, on whether his family still lives in the area:
Yeah, we’re in Kitchener-Waterloo. It’s right around where Pearson’s from, too. It’s like an hour west of Toronto.