Waking up with the Kings: October 6 - LA Kings Insider

Waking up with the Kings: October 6

As minutes ticked off the clock in the third period Thursday night and the Kings were forced to kill a pair of late Flyers power plays, the importance of the final six or seven minutes became clear and present. This was a game the Kings had to get two points out of. It was an even game, backed by excellent goaltending, and though the Kings were occasionally sloppy with the puck – especially during stretches of the second half of the second period and much of the third – they had opportunistically cashed in on an impressive rush play set up when Kyle Clifford nearly singlehandedly swiped away a Philadelphia zone exit, feeding Nick Shore, whose laser-guided diagonal zone feed was placed on a tee for Trevor Lewis. But clinging to that one-goal lead, and forced into a pair of late kills, the circumstances were evident. Los Angeles will not have much margin for error in their hunt for a playoff berth this year. With an early October heavy home schedule that the team has to take advantage of in advance of a difficult road trip, it was paramount that a game in which the Kings held a third period lead would not devolve into a night of “what-ifs” some three or four months down the line. And even though Drew Doughty was whistled midway through the period, necessitating irregular defensive penalty kill pairings of Forbort-Folin and Muzzin-Fantenberg, and although L.A. faced three defensive zone draws and six shot attempts during the subsequent kill, they emerged from the late game onslaught with the lead, setting up a Carter-to-Toffoli top shelf redirection on a two-on-one-and-a-half that seemed like a carbon copy of a number of goals that duo has accounted for in the past. Warm up the bus. 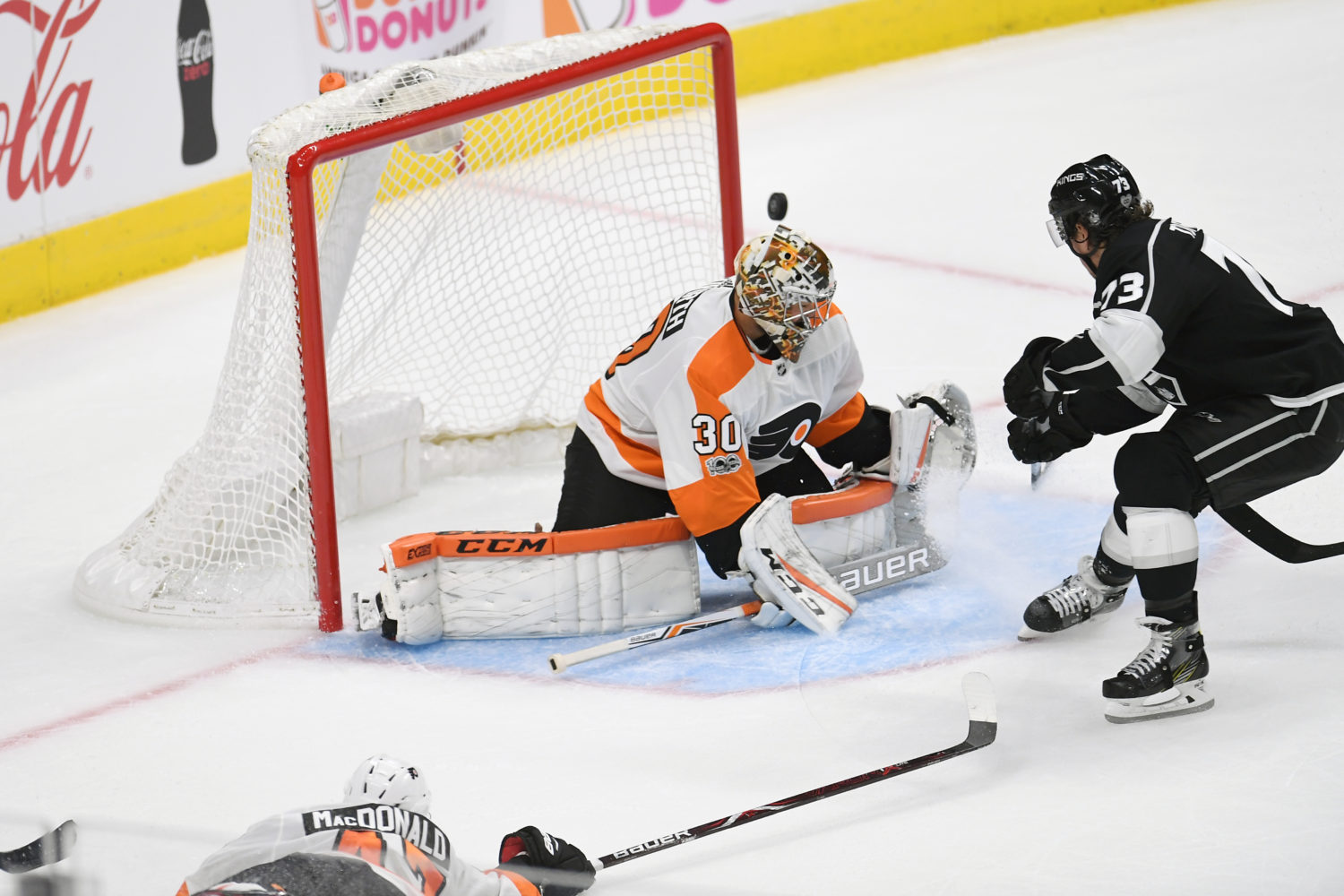 There were two forward lines that essentially remained intact throughout camp: Pearson-Carter-Toffoli and Clifford-Shore-Lewis. The two goals that were scored on Thursday night were Lewis from Shore and Clifford, and Toffoli from Carter and Pearson. Hey! How about that. But among the most significant factors in Thursday’s win was that the Kings effectively shut down the Weal-Patrick-Simmonds line, a trio that combined for four goals in the Flyers’ 5-3 win over the Sharks on Wednesday. (That’s a touch misleading, given that three of the four goals came on the power play, and Simmonds’ hat trick goal was an empty netter.) But Simmonds has scored 29, 28, 32 and 31 goals over the last four seasons, and there was hardly a rustle heard in his direction during five-on-five play. And in line with the important late-game kills, the restructured defensive pairings were quite good. Drew Doughty was subtly excellent, calming plays down while under pressure and using his excellent stick to break up plays in the defensive zone, including one ominous-looking development in which his poke check sent the team in the other direction, leading to a Jake Muzzin scoring chance. Derek Forbort played almost 22 minutes, 4:48 of which was spent on the penalty kill. Christian Folin had one hesitant play in the second period that nearly led to a Philadelphia odd-man rush but was otherwise very good in both making simple plays on the breakout and using his stick to clog passing lanes. (If only someone had written about the team’s concerted stick-checking focus!) Muzzin carried over his standout preseason into a strong checking game in which he also jumped into the rush and finished with seven shot attempts. Behind the D, Jonathan Quick was pretty okay, too. 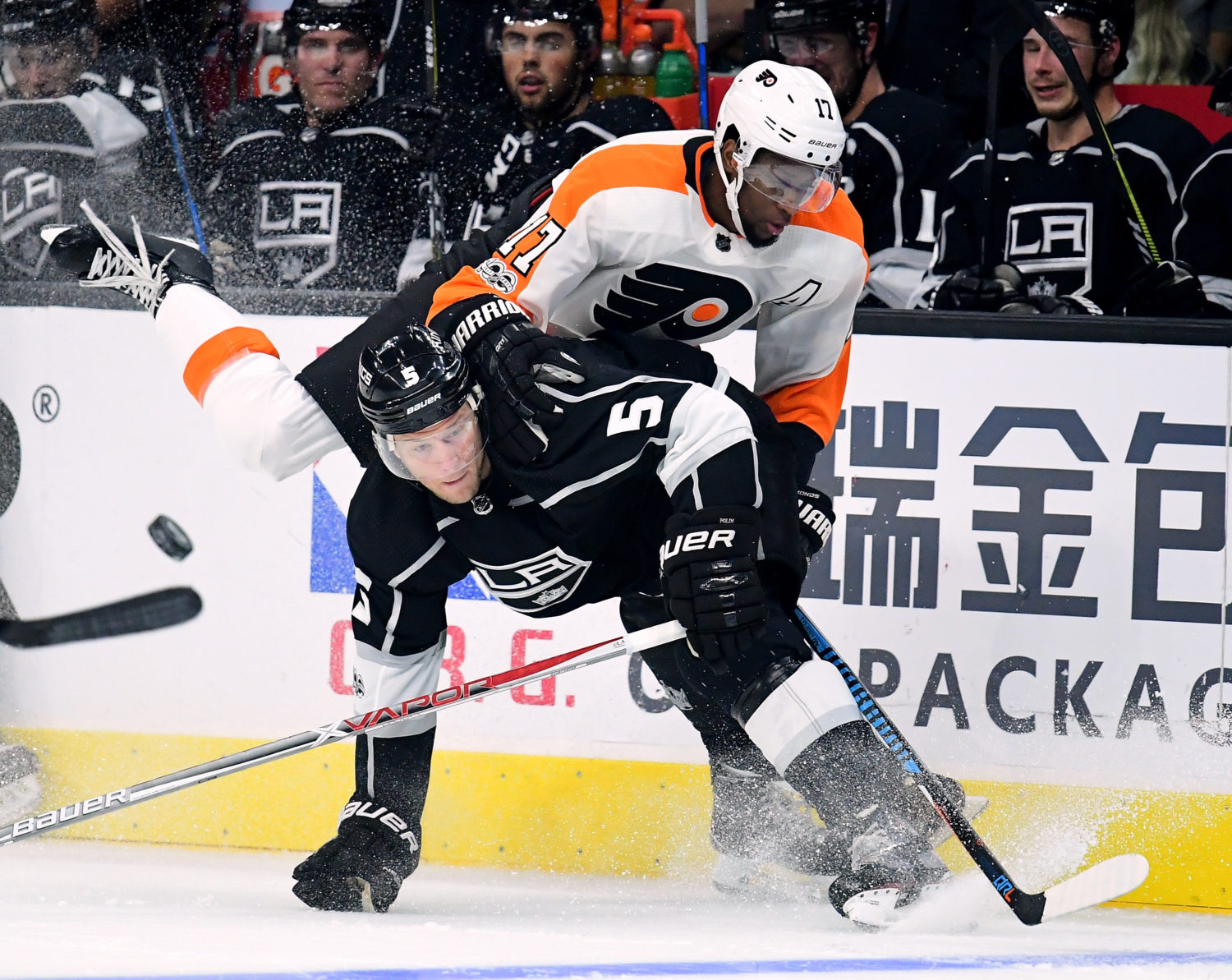 It’s hard to articulate, but it was an extremely difficult week throughout the organization following the death of Fan Services Associate Christiana Duarte during the tragic events Sunday night in Las Vegas. There was a touching salute of Christiana, the other victims who lost their lives, and the first responders who placed their lives on the line to aid those critically injured and in need of immediate aid. There were strong words of unity that were needed in binding us together and in honor of Christiana, and to offer solace to those who knew her. Dave Joseph, backed by her friends’ calls of “Chrissy!” from the seating bowl when her name was announced, and with emotion in his voice, provided a powerful and eloquent recognition of the lives ended far too soon. That’s not easy to do in front of a room of 18,230 people. Here are all the stick taps in the world to Joseph, a close friend and admirer of late Kings public address announcer David Courtney, and continued love and support to the Duarte family and all others whose lives will be forever affected by the tragedy. 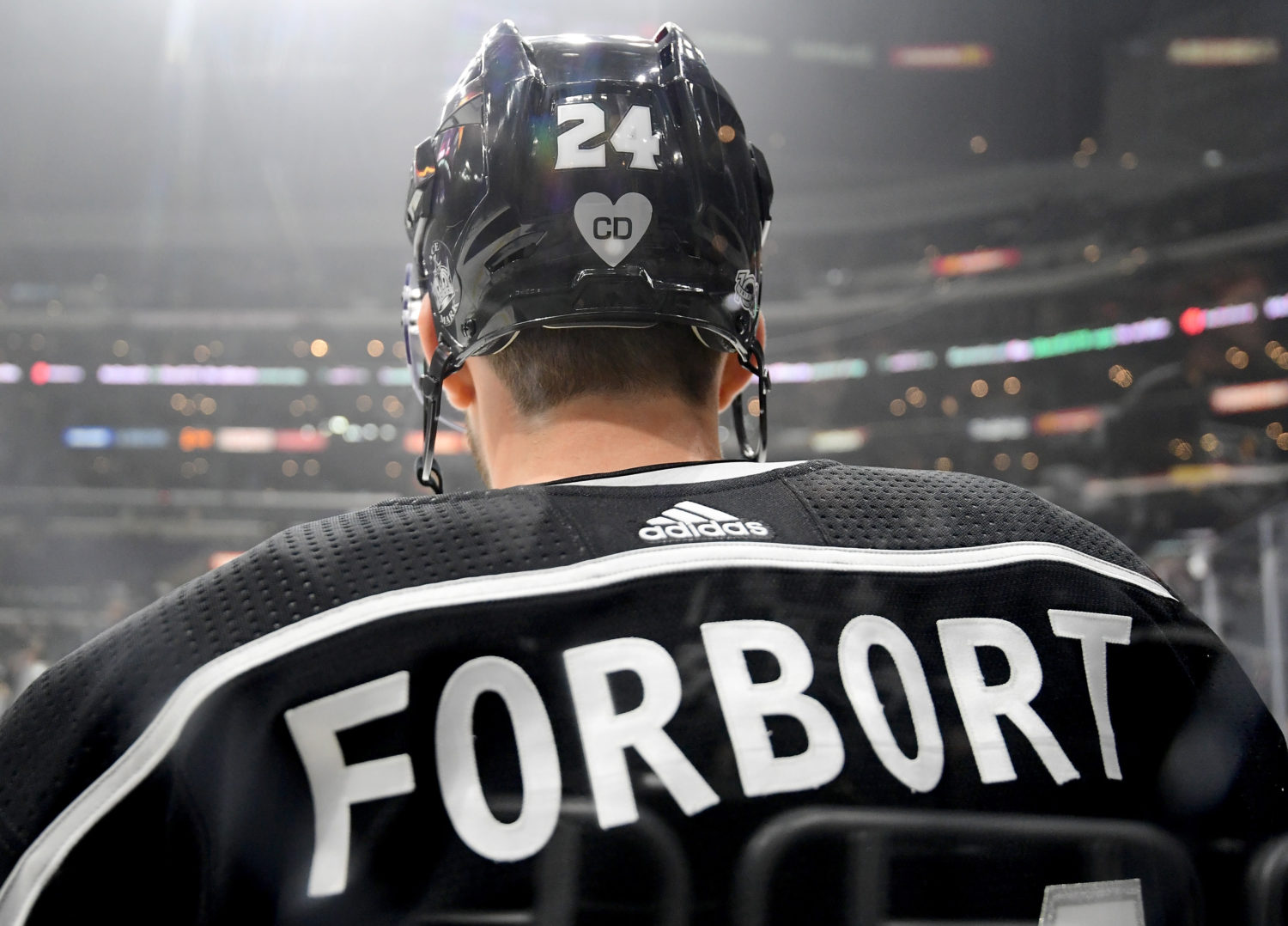