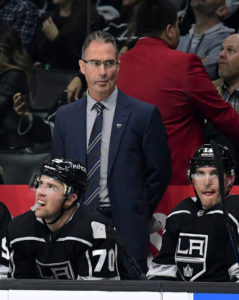 On the first win of the “John Stevens era”:
Well, obviously it’s good to get the win. I thought it was going to be a bit of a challenge, just because Philadelphia played last night and I thought they were up to game speed. I thought they’d played really well last night, and that was going to be our challenge. Actually, we got off to a good start and kind of let up a little bit in the third period in terms of managing the puck, but we were hoping to get off on a good start, a good win, take two points on the road [Ed: “at home?], so it was good to get it. [Reporter: Did anybody save the game puck for you?] You know, there were other guys in line ahead of me. I think we had three kids in the lineup tonight that it was their first NHL game, so I’d much rather them have it than me.

On his thoughts before puck drop, a “decade” since he had last coached:
It hasn’t been quite a decade. You know what? To be honest, the question was asked earlier and it’s really not a lot different. The staffs, the way they are now, I count on my assistant coaches an awful lot, and I was fortunate Darryl counted on me an awful lot, so I think the preparation’s the same, you’ve just got to deliver the message, which is a little bit different. But really, it felt exactly the same going into the game. You always get a little bit nervous and excited. I did as a player, I do as a coach, and it felt the same tonight. [Reporter: Well, when you make a coaching change, you always expect some kind of a change of culture and a different voice, even though you’ve been there the whole time. Have you noticed that much in the room in that respect?] A lot has been made of that, quite honestly. There’s been an awful lot of success with the people that are here, and I just think the fact that guys went home last year and came back in, there’s been a lot of things changing. We revamped our locker room at the practice center. I mean, we’re always trying to improve things and change things and freshen up things, so obviously with a new staff that’s different, but this group’s had a lot of success. I think they’re a little bit anxious to get going after what’s happened the last couple years, and I think that in and of itself has created a lot of excitement on our hockey team, so I’d like to see that continue.

On Jonathan Quick:
He’s tremendous. He obviously makes the key saves at key times, but I think he manages the team well. He got whistles when he needed to. I thought he steered rebounds out of harm’s way when they had traffic coming to the net, so his experience, I thought, was very evident tonight.

On a 2-0 game seeming similar to games of the last several seasons:
Well, the score certainly did, but it’s going to take some time to continue to improve on some of the areas. Obviously everyone wants to see more goals scored, but I do think there are some things happening. We had a couple goals scored off the rush. We had a one-nothing lead that we turned into a two-nothing lead, and then that’s kind of been a staple of this team the last several years. That can’t go away, but Philadelphia’s a good team. They come at you. They come at you in waves. They’ve got skill up and down their lineup, and they played a good hockey game tonight.

On what he liked about the ability to contain the Weal-Patrick-Simmonds line:
I thought our top guys were really good tonight. I thought our defense played really solid tonight. There’s still one area I think we have a lot of work to do is neutral zone on both sides of the puck. I’d like to see us shut it down better, and I’d like to see us move pucks through it a lot quicker and not turn pucks over. If you looked at the root of a couple penalties they got in the third period and some opportunities, they’re a very good rush team. I think if we manage the puck better and become a more efficient team in the neutral zone I think we’re really going to help ourselves.

On starting 10 a.m. morning skates at 9:45 a.m. like Darryl Sutter:
We’ve tried to get guys out there, the coaches. We have lots of coaches that are anxious to help the players. Guys sometimes like to get out early. Goalies like to get work in early. I was told a long time ago if you’re five minutes early, you’re 10 minutes late, so you should always be 15 minutes early. Maybe that’s why it’s happening.