John Stevens, on whether anything feels “different” in advance of the season as head coach:
Well, it’s regular season, so it feels different. I think anytime you go from preseason to regular season or regular season to playoffs everything ramps up. The games count, and lineups are full, so I think everyone’s a little excited this time of year. [Reporter: What about you personally? The first regular season game as the head coach.] It kind of feels the same, to be honest with you. I think when you’re part of a staff you go through the same preparation. You try to cover all areas of your game, make sure that you’re as prepared as you can be. That part hasn’t really changed. We’re fully integrated with our staff trying to get our team prepared with different responsibilities. That part feels the same. [Reporter: Are you pleased with training camp and what happened with China and everything that went on during the lead-up to today?] Yeah, I think so. We had a lot of moving parts in training camp. There was a lot of pre-planning that got done that I think was very effective for us. I thought the trip to China was poised and positioned really well for our hockey team. It was a good opportunity to get away but positioned at a point where we got back to fully recover, get the guys the rest they need and get ramped back up to west coast time, ready for the regular season. We’re happy with what’s happened at training camp, we’re happy with the structure of our team and the progress that we’ve made, and we’re looking forward to getting started. 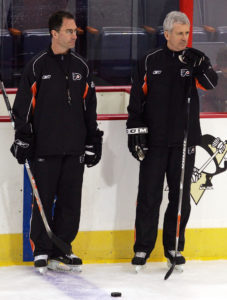 On any “irony” in facing Philadelphia to open the season:
I don’t know. I mean, we played Philly for our home opener last year. It’s been so long now – seven years have passed since I coached there – but I spent a long time in Philadelphia. I have an enormous amount of respect for the organization, and it’s obviously an exciting match-up just because it’s sort of a historic franchise, so we’re looking forward to it. [Reporter: You coached those few games before Darryl came on board, so do you count this as your first game, or do you count those as ‘interim coach,’ and this is your first game as head coach?] You know what? I think these are the first games. To be honest with you, it was interim. We all knew change was coming, and just waiting to get back off that road trip to get Darryl here and taking over. This feels like the first game, to be honest with you, but it’s been nice to get in, take over with a full summer of planning, a full training camp, so it feels good and we’re excited to get started.

On what Alex Iafallo brings to Anze Kopitar’s line:
He’s a young kid that just continues to impress. He’s got a lot of quickness and a dynamic element to his game. He’s got good hands, he’s extremely responsible, he seems like he’s on the puck all the time. We just think whatever line we put him with seemed to thrive, and we put him with Kopi and Brownie and I really liked the way it looked and the chemistry the line has, so we want to have a look at it.

On whether he was happy with what he saw in training camp in efforts to increase offense:
Yeah, we’ve tracked all those elements in terms of getting more of a push through the middle of the ice, on the rush. Having more of a fourth man attack on the rush is something we’ve tracked through training camp and I’m very happy with the direction it’s going. We have a lot of work to do – some of the structure in the offensive zone, just being around the net more, maybe spreading things out a little more. Some of the goals in terms of greasy goals around the net haven’t been there, but a lot of the goals that have been created have been from somebody being there. There have been a few of those goals. We’d certainly like to see more of them, but the fact that we have people there that’s creating space and taking the goalie’s eyes away is creating opportunity and spreading teams out a little bit. We’ve been happy with the progress, but we need to continue to get better in those areas.

On whether last night’s offensive spike was the harbinger of a trend, or a “fluke”:
I don’t know if I’d call it a ‘fluke.’ If you’d say that there are going to be nine goals scored every night, I’d say ‘no.’ I think sometimes early in the season you have some new players, new staffs, new systems. I think sometimes the element of surprise creates a little bit more opportunity. I know when you get a young player that comes into the league and you’re not that familiar with him, you might not exactly know what to expect from him, and that could be an advantage to the offensive player. But I do think the special teams has had a big impact in that. Maybe early in the year teams are catching teams a little bit by surprise because they’ve had time to plan, but I would expect that number to come down a little bit. [Reporter: Fans like it. What about coaches?] Well, as long as we get one more, I think the fans like it. The coaches are always going to look to try and get better defensively and score more offensively. But at the end of the day, you want your team to play hard, and I think of the games I watched last night, teams played extremely hard. You always want your execution to get better, but as long as the competitive spirit’s there, I think we can live with the mistakes. [Reporter: So you’d be OK with a 6-5 game as long as you guys are on top?] Right now it’s about winning hockey games, for sure, but it’s always about the way you play. We’re going to try and get better as we move along, but we’d surely like to keep that number down.

On what stood out about Philadelphia’s performance last night:
Pretty exciting team. They have lots of skill throughout their lineup. Very mobile defense. Very, very aggressive team in all situations. The power play operates with pace, penalty kill is extremely aggressive. I thought even the two goals that San Jose scored were kind of from broken plays, and I thought their pressure really created some problems from San Jose. But to me, one thing that stood out was just how aggressive they were and how active their defense are, and a real skilled element to their game, so they’re an exciting team to watch.

On whether there’s pressure as the first coach in club history to follow a Cup-winning coach:
I think following somebody like Darryl and the success he’s had, period, I had a similar situation in Philadelphia when I followed Ken Hitchcock. Those are two of the great coaches in the game, still. I feel very fortunate that I had a chance to work those guys as long as I did. I think there’s always pressure. I don’t really look at it that way. I just look at it the pressure here is to win. I don’t feel the pressure of in following Darryl. I feel the pressure in the expectations that we have here from our fanbase and the expectations we have of winning.

Two quotes were used in this article and were omitted.