Defensemen joining the rush? They've preached it; now they'll look to do it - LA Kings Insider

Defensemen joining the rush? They’ve preached it; now they’ll look to do it

Other than a few trips back to his native Ontario, Jake Muzzin remained in Southern California for the entirety of the off-season. He moved into a new house, took in the volleyball tournaments in Hermosa Beach, and attended the Stagecoach Festival, held at the Empire Polo Club in Indio from April 28-30.

He enjoyed Stagecoach, but it isn’t on the agenda for the coming season.

“That would mean we didn’t do something right. Obviously we want to be playing around that time,” he said.

Over the past three seasons, the Kings have had one playoff win and two opportunities to attend Stagecoach. For that to change, the team will be banking on resurgent performances from a collection of players that includes Muzzin. There’s no sugarcoating anything – Muzzin, a versatile defenseman who has found success in all three zones was simply off last season and will look to return to “being emotionally invested and being a tough guy to play against.”

His previous success – a valid argument can be made that the Kings do not win the 2014 Stanley Cup without Muzzin’s contributions – stemmed from his success in defensive zone checking, which leads to an ability to minimize time in the defending end and move the puck up the ice quickly.

Now, as part of John Stevens’ push to spur more offense out of his group, he may also be spotted more often joining the rush. This isn’t some revolutionary tactic.

“They preached it earlier, but I don’t think we did it, and now we’re doing it,” Muzzin said.

His defensive partner from that 2014 Cup run is in agreement. Los Angeles, like many teams, calls for defensemen to join the rush, but in actual game situations, the implementation wasn’t consistently applied.

“It’s always kind of been a thing,” Drew Doughty said. “Like, we’ve always emphasized having the fourth guy on the attack, but I think John is really trying to put even more emphasis on it. We’ve always had it. It’s not just me and the other top offensive D-men on our team doing it, we want all the D-men doing it.”

“They brought more attention to it than before. When we are there, there are scoring opportunities, there are options. We’re not giving up anything risky defensively. Let’s just do more of it. That’s kind of what we’ve been doing, and I’m liking it and I’m sure the other D-men are getting up. I’m sure Drew’s licking his chops to be doing that as much as possible, too.” 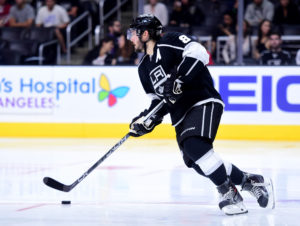 Doughty noted that it doesn’t matter if the defender is more of a stay-at-home type, like Derek Forbort, or someone more inclined to provide offense. If the opportunity is there, take it. Still, underscoring such an aspect of the team’s attack should provide more opportunities for skilled defensemen such as Doughty, Muzzin and Alec Martinez, the latter of whom was referenced by Stevens during a season ticket member event over the summer as a player who will be able to provide dividends in such situations.

Like his players, Stevens noted that such efforts aren’t exactly new tweaks to the system.

“I think it’s something we’ve demanded for several years now. It is something I’d like us to see do better,” he said. “Our defensemen, if you look at the stats, we’re in the league leaders for point shots, generated goals, assists from our back end, but I just don’t think we get enough of it on the rush and I’d like to see more of it as the D joining the rush than I would see D leading the rush. The whole idea of playing faster, getting pucks up to forwards quicker and then being apart of that attack will help us there, but certainly it’s something that’s always been emphasized here. I think you’ve got to attack with five and we’ve always done that here, but we’d like to see a little more execution, especially on the rush in terms of getting them integrated as part of the attack.”

Last season, Kings defensemen accounted for 37 goals, the third most in the Pacific Division behind San Jose (which relied on Brent Burns’ 29) and Calgary. Proportionately, that’s not a bad haul, considering Los Angeles overall was in the lowest quadrant of actual offense.

Since such rush priorities have been previously stressed, was there simply an execution issue? Doughty didn’t seem to think that it was rooted in defensive tendencies or defensemen hanging back.

“I think that our mentality has been for so many years was just get the puck out wide on the entries and shoot it for the far pad or shoot it on net rather than pulling up, hitting the fourth guy. Or, even just taking it to the net hard – not that we didn’t do that at all. We did. But we definitely didn’t do it enough,” he said. “We want guys taking pucks to the net hard. We don’t want just those off-pad shots all the time, which are effective at times – so we definitely need to still use them. That was kind of our mentality before – get down the wings, get pucks to the net, get bodies to the net, whereas now, we’re definitely thinking of hitting late guys in, making some more plays.”

John Stevens was part of Darryl Sutter’s staff and will look to retain many of the prior coach’s systematic adherence, attention to detail and tightly structured play that resulted in excellent checking and formed the base for a pair of Stanley Cups.

But, as Muzzin noted, “they’re two different guys,” and there should still be ways to adjust their tendencies to accentuate the ability of a number of capable offensive defensemen. Doughty, Muzzin and Martinez are among them; Paul LaDue, Kevin Gravel and Forbort will also look to continue to grow into roles in which they’re also capable of jumping up into the play.

“We still want to be a tight checking defensive team and give up as little as possible but then there’s a switch where once we have the puck, let’s attack more and be quicker, think ‘score,’ finish at the net more,” Muzzin said. “Middle drive has been huge on the couple practices we’ve had. Certain stuff like that. I mean, it’s only been two days. Those are the changes I’ve seen.”

Drew Doughty, on whether offensive zone playmaking impacts forwards or defensemen more:
I think I already do that naturally, so when I rush the puck, yeah, it definitely affects me, too, so yeah, I’m listening. But I’ve always been the type of guy to do that. You’re not going to see me shoot too many pucks on the pads. You’re going to see me hold onto it more, which is an area of my game that I can definitely improve on is getting pucks up to the forwards quicker and maybe shooting the puck a lot quicker, too. It is more forwards. Now that they know they have more of the green light to make those plays, they’re going to have more fun making those plays, and when they accomplish those things, their confidence is just going to grow. Yeah, there are going to be times where we mess up and it doesn’t work, but that’s why you’ve got the other five guys on the ice with you, to make up for your mistakes. We’re not emphasizing risky plays, but we’re emphasizing trying to make more little plays to each other. The number one thing that I’ve always talked about is talking on the ice. I think that is the absolute most important thing for a team to have – to talk on the ice. Every time I’ve had a partner, we emphasize that, talking on the ice, and it makes it so much easier. Like, I can’t even explain how much easier it is when your partner’s talking to you, so we need everyone to come together and talk all the time. 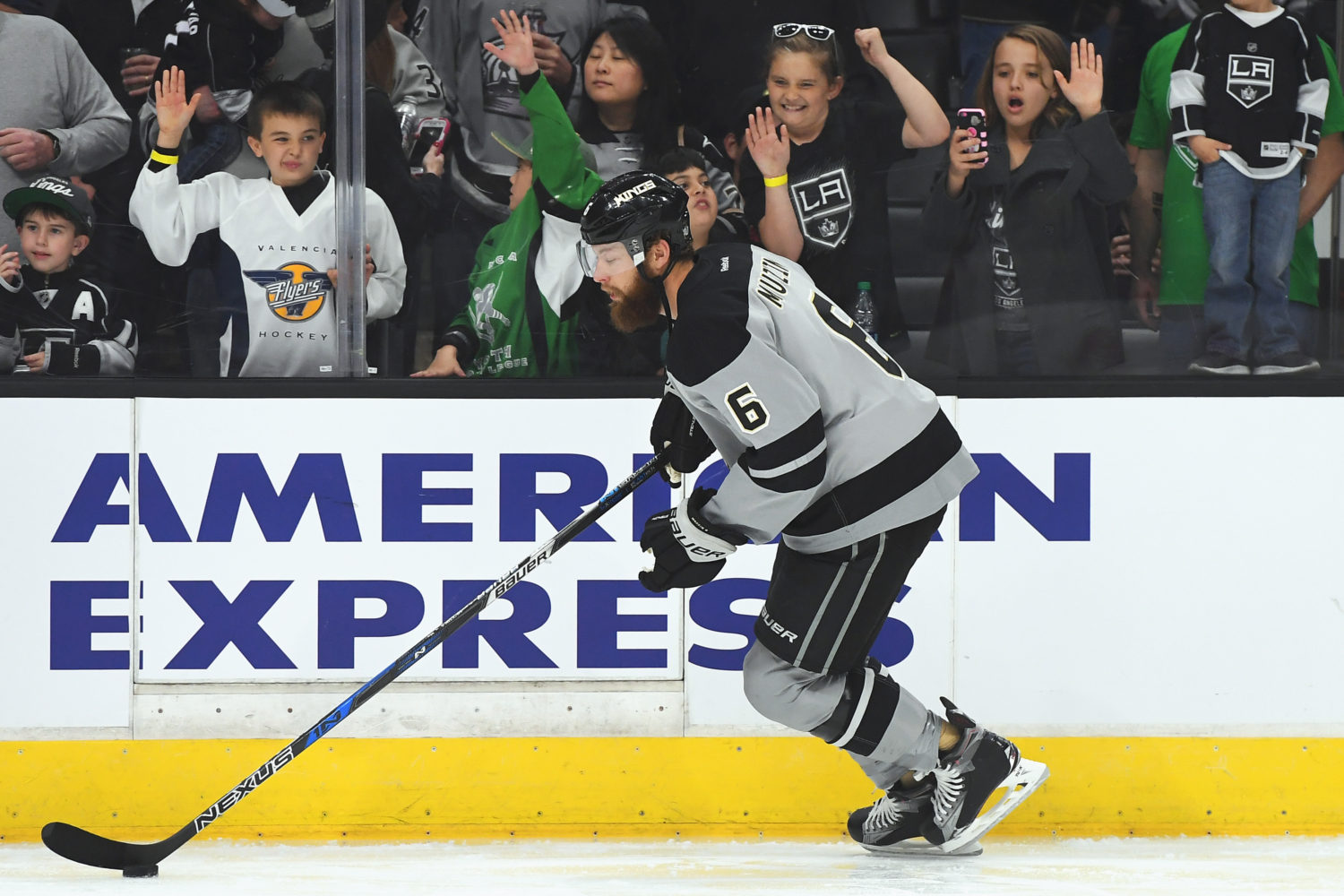