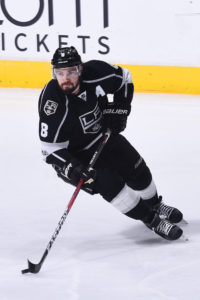 The good: He’s Drew Doughty. He sees the ice like Neo sees The Matrix. Sadly, the most recent Kings season was basically The Matrix Revolutions, a disappointing follow-up to a disappointing follow-up, and it ended forgettably even though Doughty, like Neo, did some really cool things. Armed with an ultra-diverse skill set and most comfortable in the high-stakes, emotional and often heavy games against divisional foes, Doughty continued to assume a stronger grip on his leadership responsibilities while remaining on his perch as the most elite defensive defensemen in the game. Outside perception was going to be a challenge to replicate in the reprise to a Norris Trophy season, and there were some personal hiccups between October and December, but once his game smoothed out, he posted some of the most impressive defensive numbers of his career. The Kings allowed 1.56 goals for every 60 minutes of five-on-five ice time of which Doughty was a part, representing his best GA60 rate ever and the sixth-lowest among NHL defensemen with a minimum of 500 five-on-five minutes played. “I think I’ve been playing really good defensively, especially the last month and a half,” Doughty said in mid-January. “Ever since we kind of started the trip in Buffalo with a tough game I’ve felt like my game’s been at probably the highest it’s ever been. Maybe not putting up the points I’d like to put up, but defensively, I feel great. I have a great D-partner in Derek Forbort who I think we’ve gelled great together and we’ve done a great job. We haven’t been scored on a lot against which is our main goal every night. We go out there not wanting to be scored on one time, and we’ve done a good job of that.” Doughty endured some dings midway through the season but played in all 82 games for the third consecutive season and will open 2017-18 with a team-best 244 consecutive games played.

That Doughty, a mid-season All-Star, was able to maintain the best goals-against numbers of his career in a season in which he partnered with a rookie defenseman in front of a third string goalie is an impressive achievement, one in which there isn’t enough of an applicable statistic available. “Drew makes guys around him better when they’re struggling. He makes you guys that you call up safe. He makes guys who are struggling better,” Darryl Sutter said in late January. “That’s why he is who he is.” When Doughty and Forbort were together, they weren’t always driving play, but they were successful in keeping the puck out of their net. As is typical, the seven skaters who earned the most ice time alongside Doughty posted a worse GF% when they were not on the ice at the same time. There probably isn’t an NHL player who defends the rush as well as Doughty (though we’re docking a point for the giveaway to start this play), an aspect of his game he described in impressive detail. I’m not sure whether he sees the game “differently” from other players at his age or position, or if that’s even a useful way of describing it, but he does an excellent job explaining plays and describing the detail and subtleties inherent in the opposition’s best players, which, from a selfish media standpoint (which is not at all important) is incredibly helpful and provides a glimpse of the way he sees the ice. 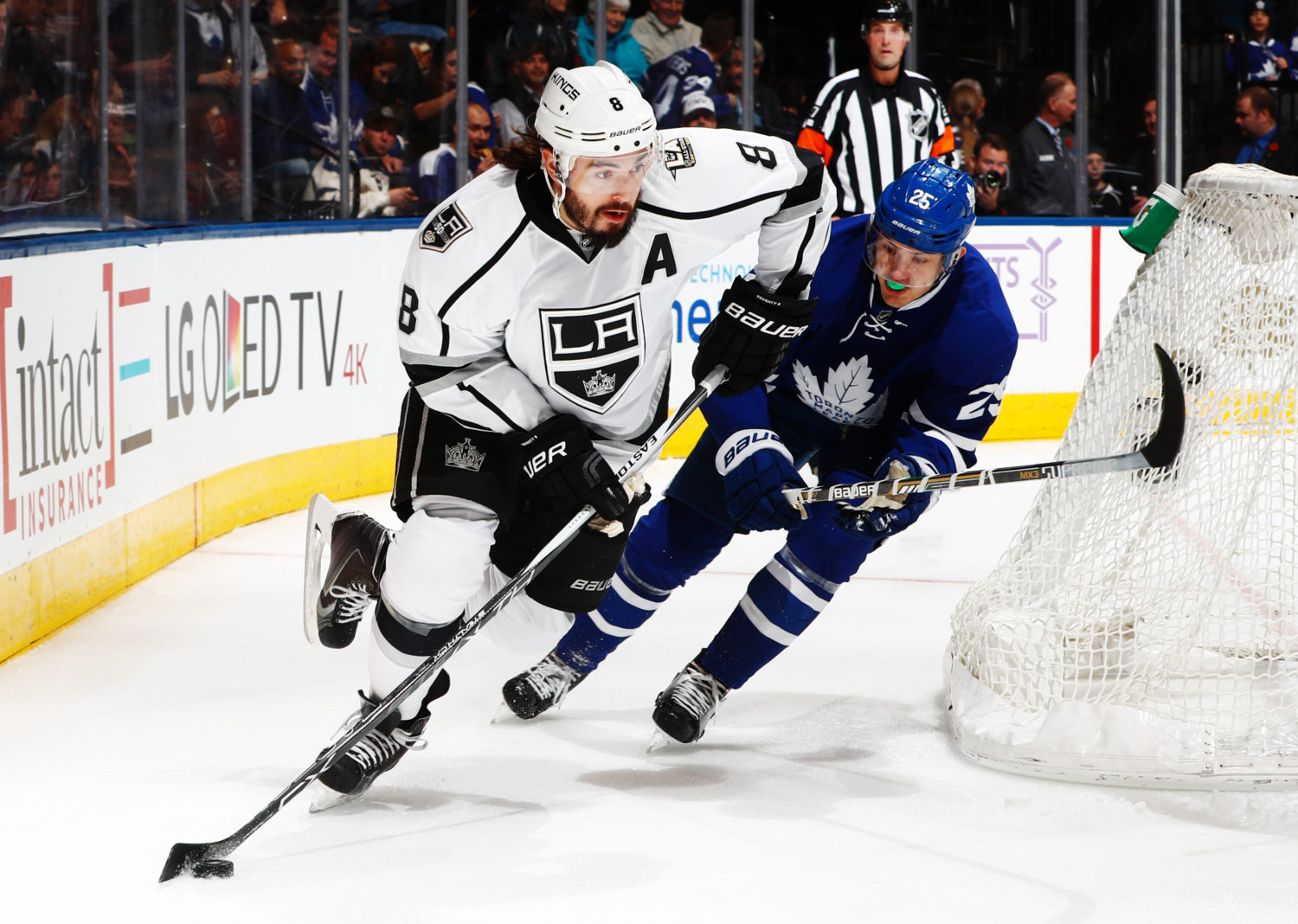 “How has Drew Doughty taken on more leadership” was a question that Sutter endured in various forms over the better part of the last five years, and with last summer’s captaincy change, Doughty wore not only a more permanently affixed letter but also the expectations that he’d continue to serve in a “pronounced” role as a more tenured and accomplished player, as Sutter said before the season. Again, it’s difficult to get the most accurate read on the more intangible criteria such as “leadership” or “competitiveness” or any of the abstract concepts the Kings graded exceptionally well in during their Cup seasons that are often displayed beyond closed doors. But in conversations with Doughty, his coaches, and team personnel throughout the season, all indications I received was that the 27-year-old had taken steps towards what had been asked of him. “I really didn’t do too much different this year. I felt, if anything, I took a step in the leadership category for sure. No doubt in my mind. And I felt more comfortable out there as a player and I feel like my goals against numbers, the amount of goals I was on for against was a lot better than it was last season and that was one thing I really focused on this summer to get better,” Doughty said after the final game of the season. “I know no one even really mentioned me in the Norris talk this year, but to me, my season was pretty similar to last.”

The bad: The 2016-17 season wasn’t the best frame to evaluate Doughty. The team struggled to score goals, and Doughty was affected by the low tide. It’s actually impressive that his five-on-five points only dropped from 18 to 17 in a year in which the Kings’ offense dropped from 14th to 24th in the league, but on the power play, he fell from nine goals and 24 points to five and 19. All of his possession metrics returned to “simply good” a year after he led league defenseman in Corsi, and it’s difficult to articulate after so much time has passed, but Doughty, despite completely passable numbers early on, took a while to get off the ground in the first half of the season, and his pace, reads and decisionmaking, through November, simply didn’t seem to match the previous year’s zeniths. His game ultimately rounded into very good shape in January, and his ability to improve as the season progressed is rooted in his less breakneck time on ice per game, which decreased for the second consecutive season to 27:09. Again, this is something that’s not measurable, and these evaluations try to avoid these types of emotional offerings, but as confidently as Doughty spoke about the team’s ability to turn around its performance, and even though the Kings regained the services of Jonathan Quick, ultimately the first year under the reformed leadership group will be remembered for the bottom dropping out on the team over the final six weeks of the season, and it’s completely fair to reference team leaders and stars when the buy-in under Sutter evaporated to the degree that it did. Doughty understood this. “I put a lot of that on my shoulders,” he said of not making the playoffs. “I did feel like I played well for the majority of the season but at times I could’ve been better and made a difference so it’s frustrating that at those times I didn’t step up and make a difference and help us out more.” On the ground level, the Doughty-Tkachuk incident manifested over this time, serving as sad punctuation late in a season gone awry when the Kings (or Drew, after he recovered) didn’t immediately line up for the Siege of Constantinople in his defense. 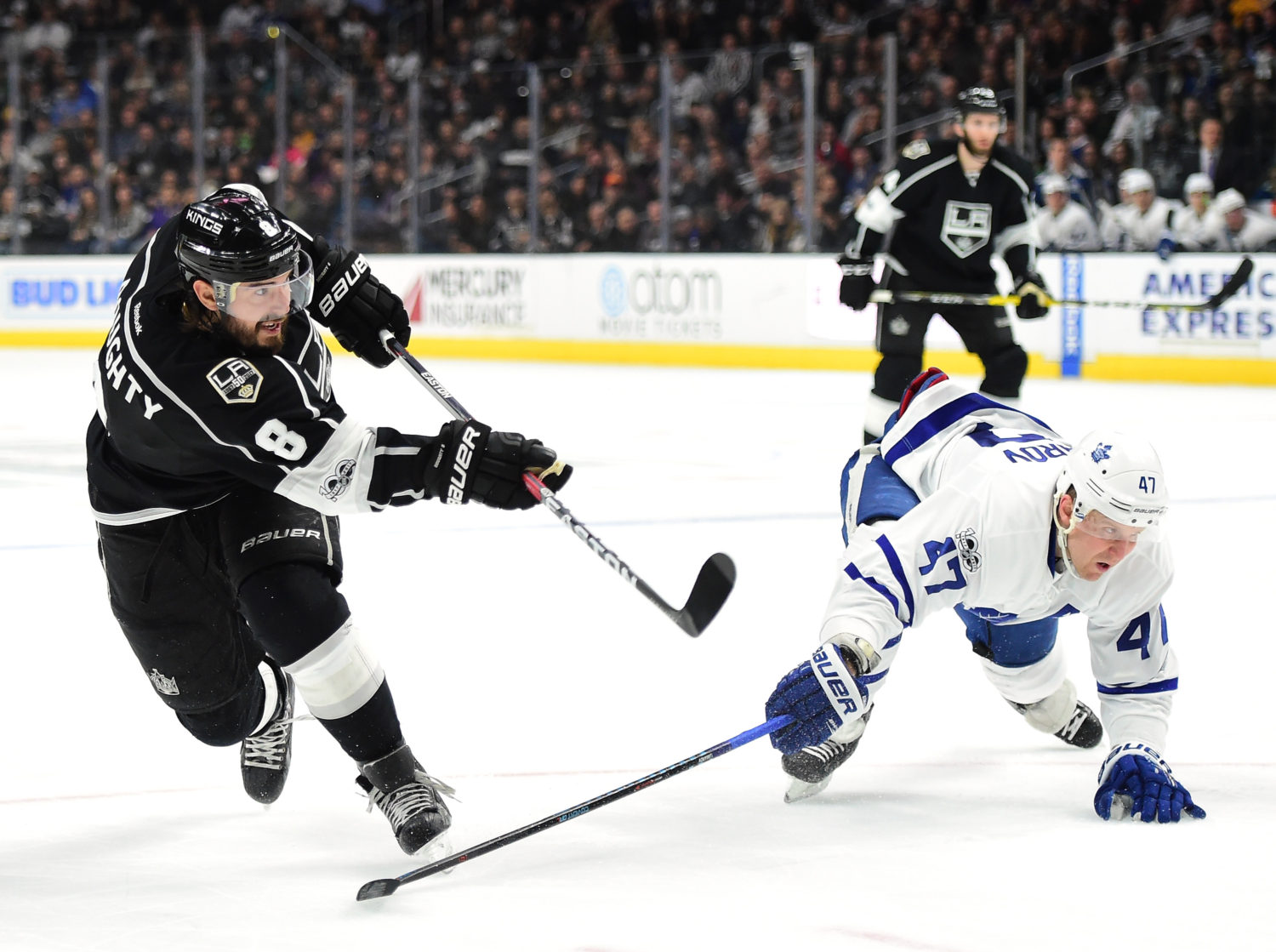 Going forward: With two years remaining at $7-million per, Doughty’s contract provides excellent value for a team that sorely needs it. (That the team pays a combined $18.9-million to a defense consisting of Doughty, Forbort, Alec Martinez, Jake Muzzin, Paul LaDue, Kevin Gravel and Christian Folin helps to off-set several bloated contracts up front.) Doughty will be some version of “excellent” in 2017-18 and 2018-19. What lies beyond that is obviously the elephant in the room, and while there’s no sense in any sort of worry some two years in advance of his free agency, there is the realization that Doughty will be due a massive payday on July 1, 2019, and Los Angeles is a team, similar to many championship teams, that has already paid players for their accomplishments, which creates a budgetary squeeze on the middle-to-upper-tier players. In any event, the Kings will offer Doughty plenty, and there shouldn’t be any concern that the team won’t be able to put its best foot forward when that time comes. (The photoshopped-Doughty-head-on-a-Leafs-jersey-by-Toronto-media will be annoying, but don’t break, Insiders. Stay strong like Lightning fans.) Watching Doughty is like watching Nick Lidstrom or Ray Bourque in that there is such subtle artistry in his improvisation that isn’t always discernible to the casual fan. Even this year, there has been hemming and hawing at times over certain decisions, actions or reads, which speaks to the incredibly high standards from which he’s viewed. There shouldn’t be any great changes expected in Doughty’s game under John Stevens, who Doughty butted heads with a bit early on in his career but has served as a major influence in the defenseman’s all-situational growth. “I think that’s actually a good thing that we were able to go through a little bit of resistance with each other and develop a really strong relationship of trust,” Stevens said in April. We’ll wait until training camp to see whether Doughty returns to play alongside Derek Forbort at the outset of the season, or whether there could be more wholesale changes in the defensive pairings. Expect Doughty to lift up whoever he plays with. 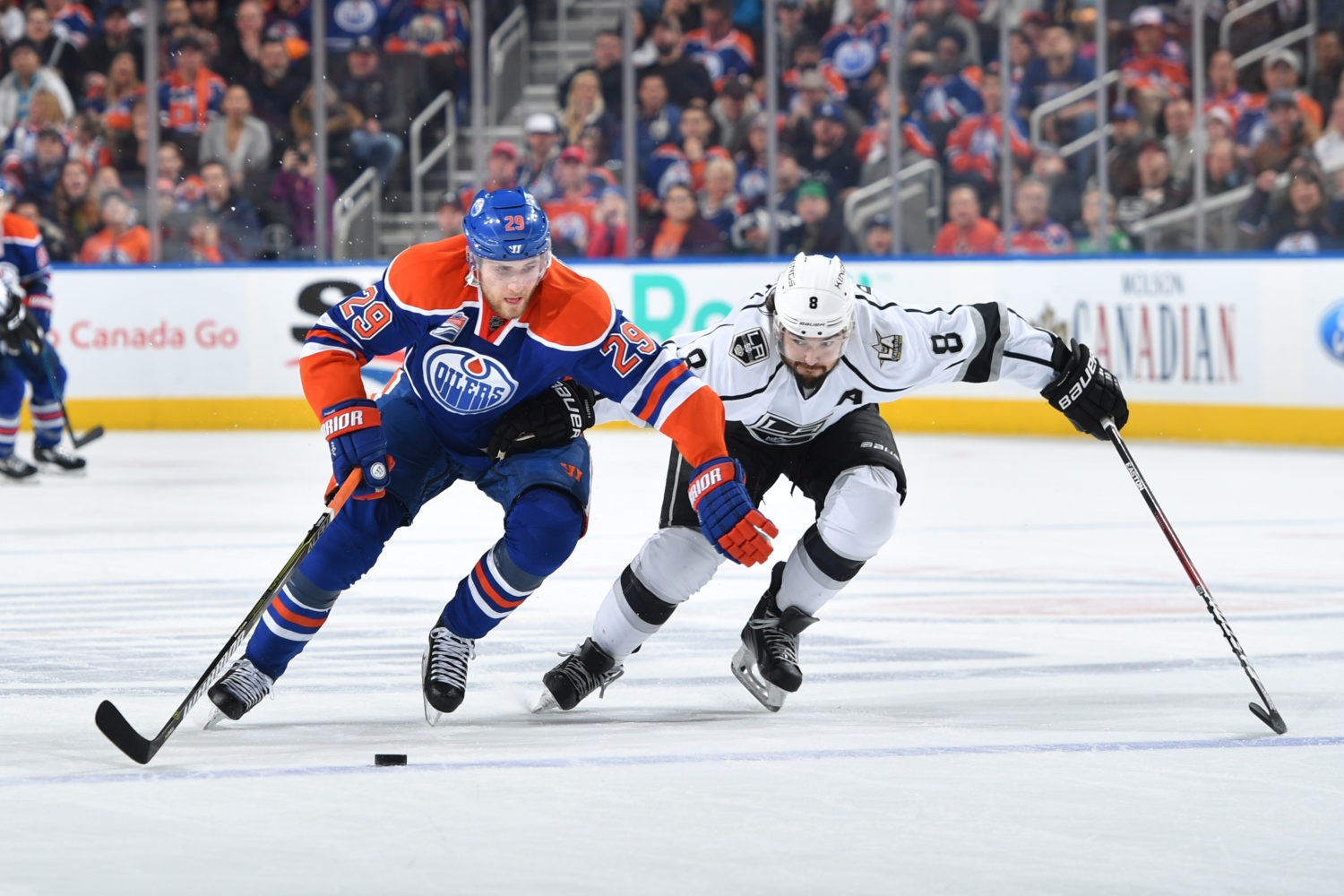 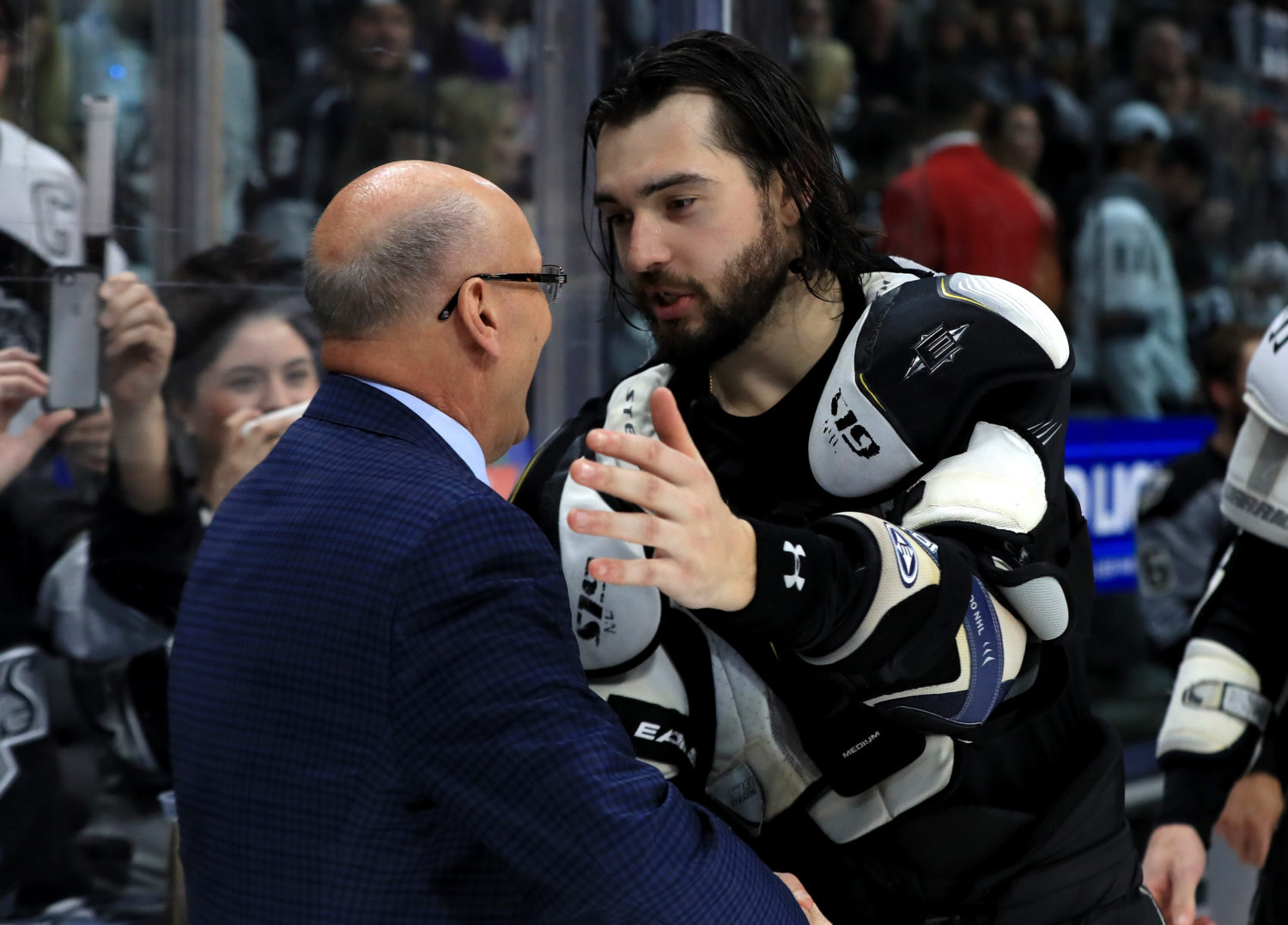