He’s a touch more weathered than 28-year-old Arizona Coyotes general manager John Chayka, but Rob Blake, the sixth-youngest NHL GM, negotiated with a number of prospective free agents this past week, and July 1 approached, he happened to be speaking with a pair of former teammates in Mike Cammalleri and Joe Thornton.

“I mean, it makes it easy because I just talk directly to ‘em, going forward on that aspect,” he said. “Yeah, that part is a little different. You won’t see that too often anymore. I’m starting to get away from the game a little longer.” 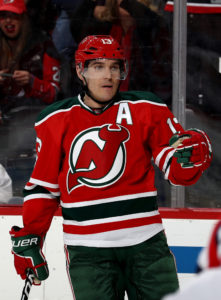 In the end, Los Angeles signed Cammalleri to a one-year, incentivized contract that comes with $1-million cap hit. The expectations for the 35-year-old, who has 287 goals in 840 career games, is clear.

“What I expect is scoring,” Blake said. “I think that’s one thing Mike has been able to do throughout his career. It’s one thing he does a lot, and the opportunity here, just knowing where we were with our team and understanding the space we had available and what was out there in free agency, the scoring need that we were looking for, I think Mike gives us an opportunity at that.”

Blake noted Cammalleri’s familiarity with a pair of former teammates in Dustin Brown and Anze Kopitar, who both played with Cammalleri during his initial stint in Los Angeles. A 2001 second round draft pick out of the University of Michigan, Cammalleri totaled 93 goals and 205 points in Los Angeles from 2002-08, and Blake noted that the team is “looking for that scoring edge” from a player who posted a 39-goal, 82-point season with Calgary in 2008-09 and scored as many as 26 goals with Calgary (over 63 games) in 2013-14 and 27 goals with New Jersey (over 68 games) in 2014-15. It’s all part of a push to continue to add scoring to a group that tied for 24th in the league in goals scored in 2016-17 while addressing some much-needed skill in areas of the lineup.

“We knew regardless if it worked or not, we had holes to fill on depth defense, and also looking at some skill in the forward position,” Blake said. “I think the only thing that came, probably, was Mike Cammalleri wouldn’t have been available a couple of days ago until he was bought out and was into the free agent market, so that changed maybe a little bit at the end. I think our focus was pretty strong here the last few weeks on our needs, and looking at the depth at the defense and the skilled forward level.”

The hole in the defensive depth was created in large part by Brayden McNabb’s expansion draft selection by the Vegas Golden Knights, and the Kings signed a right-shot defenseman in Christian Folin to help compensate for the void left by his absence.

But the team’s top target in a weak free agent crop – a “priority,” as one source told LA Kings Insider – was trying to sign entrenched rival Joe Thornton from the San Jose Sharks. While Thornton had played in San Jose with Blake, personal loyalties were not as important to the Kings as the tangible benefits available by reeling in the future Hall of Famer and among the greatest distributors and power play specialists of his generation.

Los Angeles went hard after Thornton and correspondence with multiple sources earlier in the week indicated that the Kings could be the favorites were Thornton to move on from the Sharks.

But the 38-year-old center ultimately signed a one-year contract to remain in Northern California that will pay him “closer to $6.5M than $6M,” as TSN hockey insider Bob McKenzie shared. While Blake wasn’t sure that L.A. thought they had a “chance” at ultimately landing Thornton, there was ample communication between the parties.

“We definitely talked to his camp the last couple days and showed a lot of interest in him,” he said. “He’s a terrific player, a terrific person to be around, and in the end it didn’t work out.”

And so the Kings turned their attention to Cammalleri, who wasn’t really on the team’s radar until the forward was placed on waivers for the purpose of a buyout late this past week.

Where the winger slots will change throughout the year based on injuries and needs. But given that the team has been looking for a scoring winger to play alongside Anze Kopitar, that seems like a logical landing point.

“I mean, that’ll obviously work its way out throughout camp and with Johnny Stevens, but I think if you looked at our left side with Pearson, Andreoff, Clifford – Nolan can play both sides – I would see him in that mix,” Blake said. “Whether it’s with Kopitar or not, that’s probably where he’ll get an opportunity at some time during the season, for sure. His job is to score, and he’s going to play with players that are going to allow him to score goals.”

It’s still too early to gauge exactly how much cap space Los Angeles has because Paul LaDue, Jonny Brodzinski, Kevin Gravel and Nick Shore, amongst others, are restricted free agents still in need of new contracts. But based on financials provided by CapFriendly.com, the Kings have roughly $6.65-million of available cap space, a figure that takes into consideration Adrian Kempe and Jack Campbell’s contracts as well as the buyout of Matt Greene and Mike Richards’ cap recapture and termination penalties.

“A lot of things can occur from now ‘til training camp,” Blake said. “I envision the roster that we’re settling with here today going forward, but again, like I said, that can change. We do have a little flexibility cap-wise. I wouldn’t say it’s a lot, but there are some things we’ll obviously look at going forward, but again, the roster that we’re settling on here today, we envision starting the season with.”

As expected, Jarome Iginla will not be returning to the Kings after posting six goals and nine points in 19 games after being acquired near the trade deadline from the Colorado Avalanche.

“I talked to Jarome near the end of the season and maybe a month after the season and told him what our plans going forward were, and had a good understanding,” Blake said. “He was terrific for our organization, and for me to sit upstairs, and to watch how he prepared every night, his game in Calgary, how he stood up for his teammates, just the things he did, it’s a real good opportunity for our young players to see that for a month and to be around it, and I hope he took a lot from it, and we wish him well.”

Because the Kings won’t sign him, they will not have to send a conditional fourth round draft pick to the Avalanche, as per the stipulations of the trade.

Rob Blake, on whether the Kings will look to make trades to boost the offense:
I think we’ll always look at things like that. I don’t think that ever stops. Regardless of the things you look at in free agency, you’re always looking at different avenues to help the team or to better the team. I’m sure there’ll be different things that come up, but I don’t think that’s any different than any other focus.

Blake, on how expansion affected the team’s free agency plans:
I’m not sure of other teams’ philosophies on that, but as far as ours in free agency, we lost a pretty good defenseman in Brayden McNabb. I don’t know if we would’ve been focused on a depth defenseman in free agency if it hadn’t been for the expansion draft. I do think that opened up some needs on other teams because you lose a player off your roster, and in our case, a pretty good player. In that aspect, our needs or our focus, because of expansion, focused on a defenseman. 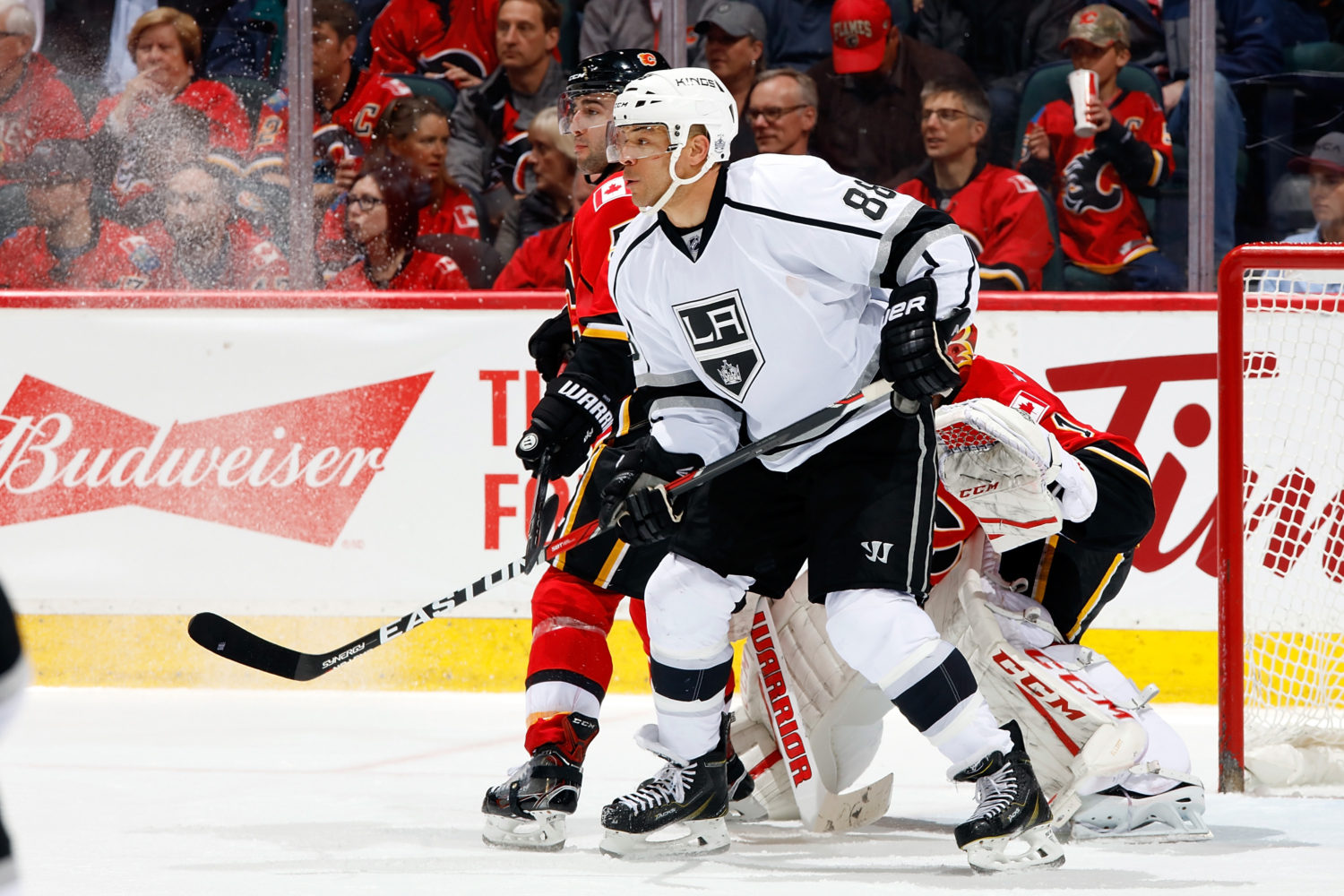