Checking in with the scouts on the verge of the draft

More importantly than who the Kings select on Friday and Saturday is the knowledge that Quebec/Maritimes scout Denis Fugere, who was diagnosed with Grade 4 mantle cell lymphoma in September, 2015 and emerged healthy after undergoing months of chemotherapy and stem cell treatments, was back at his perch around a table filled with other scouts earlier in the week.

Once he found his place amidst his colleagues, his personal journey began coming into focus.

For the scouts, Fugere’s presence meant that a friend was being welcomed back into the fold. It was a symbolic syndicate.

“Even though I would not have done much this year, just being here means so much for me,” he said. “The organization has been so good for me to go through it that hey, just being here, I’m happy.”

On the flip side, Fugere spoke about the synergy amongst his colleagues as the team’s management structure shifted from Dean Lombardi to Luc Robitaille and Rob Blake. With Mark Yannetti still leading the amateur scouting efforts, there was little disruption to the scouts’ collective efforts.

“I feel that the group is the same, maybe a litte less tense as it has been some times in the past, but I think basically it has not changed that much,” Fugere said. “Maybe at the upper management it has changed, but we don’t feel that stress or that major change. I think it is business as usual for us.” 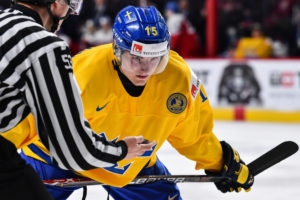 One scout was missing from the team’s lunch on Friday. Niklas Andersson, an amateur scout in Europe, has been with his family for most of the week as his son, Lias, prepares to have his name called on Friday night. Ranked third among European skaters by NHL Central Scouting, Lias Andersson should be a mid-first round draft pick.

How do the Kings scout a player who has literally been a member of their family?

“I mean, we’ve known Lias for years. He’s been going to the games with us,” said Christian Ruuttu, the club’s head European scout. “Actually, he’s been helpful even last year telling us a little of the personnel of players, the Swedish players, when he was playing on the Under-18 team. We’re trying to be very … openminded, of course. Lias is a hell of a player. It was very much fun to watch his last two years, how he grew as a player, how his role in the Swedish league got bigger and bigger and ended up winning the Swedish championship with HV71, being the second line center of the team.”

It is possible that the Kings will consider Andersson with their first round pick, but there are other interesting options at 11 overall. One is Elias Pettersson, who oozes skill and will be looking to pack some weight on his 6-foot-2, 165-pound frame. A player with a birthday after the September 15 draft cutoff, Pettersson had 19 goals and 41 points in 43 games over his 18-year-old season with Allsvenskan-Timra.

“Very good hands. Magic hands,” Ruuttu said of Pettersson. “He’s got great moves, he’s got good vision, he skates. He’s tall, but he’s very skinny, so he’s very light, but he’s still able to play at a high level. He’s got to get stronger and bigger a little bit for the next level, but he still always finds a way to be able to compete and produce.”

The life of a scout entails traveling long distances, often by car through inclement weather. This certainly applies to Tony Gasparini, an amateur scout based in Minnesota who made a particularly memorable scouting trip in the northern part of his home state in the middle of winter.

“We woke up, it was minus-43 without the windchill, and it was minus-60’s with the windchill, so that would’ve been about as cold as it possibly could be,” Gasparini said. And Mark Yannetti was with me at that time, and even he said, ‘this is unbearable.’

Fortunately, the balmy surroundings of a hockey rink offered sanctuary.

“You go in and warm up,” Gasparini said. “It was so cold outside where you just didn’t want to expose skin. Like, your nose froze.”

While this particular draft is being critiqued because the names at the very top don’t necessarily have the same ceiling as those at the top of recent drafts, once the top names are off the board, business should be back to normal.

“I think the common misconception is that a draft is strong or weak, and I think usually that misnomer is said in relation to what’s at near the top,” Gasparini said. “However, in every draft there are players throughout where it’s pretty consistent. From year to year it’s pretty consistent in regards to the depth, especially when you start talking about four-five-six-seven. That’s where it’s our job to find and try to cultivate talent in order to help, and those are the types of picks that can really help your organization accumulate depth and build a wealth of prospects.”

The Kings have had only one first round draft pick – Adrian Kempe was selected 29th overall in 2014 – since Tanner Pearson was claimed with the 30th overall pick in 2012. There has been success with mid-round picks during the earlier part of the decade, but the Kings simply haven’t had a ton of picks recently. Between 2015 and 2016, they’ve made 10 total selections.

Still, with the contributions harvested from non-first round picks in Jonathan Quick, Tyler Toffoli, Alec Martinez and others, the team has been able to rely on players from later in the draft to serve in important roles. Is there any commonality that links contributing players who may not have been selected in the first round?

“You know what? Dean started this, and Rob is now continuing it,” Gasparini said. “I think that when you’re looking at all those guys, they all had common strengths and weaknesses, and we were set forth that these are the principals. These are what we’re looking for in the LA Kings, and in addition, with how successful how our development staff is, these are the things that we can address through development. So I think the traits and attributes we’re looking for have been defined and set for us, and I think that’s why we’ve had a little success in the later rounds.”

Christian Ruuttu, on whether the scouting approach changes with a pick as high as 11th:
No, we pretty much [approach it] the same way. It’s the same way. We look at it like we’re not thinking ‘til we have a first rounder or not, but we’ll do the grind and we’ll know sooner or later where we’re going to be picking and will be focusing a little bit more on there. I mean, if you don’t have a first or second overall pick, you don’t put all that emphasis on the high-end guys if you don’t have to. But we do the due diligene on them, too.

Ruuttu, on having eight picks one year after having only four:
It’s much more interesting, for sure. And then sitting on Friday [at the first round] not having any picks, just watching, [saying,] ‘there goes a good player,’ it actually ends up kind of with a betting war of who’s going where when you don’t have a pick. But you still have to sit there for three and a half hours.