NHL Draft: Could LA move up or down? What’s Blake’s outlook? 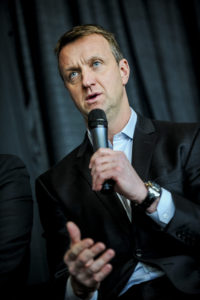 With the NHL Draft kicking off Friday night, LA Kings Insider will be present throughout the team’s stay in Chicago and will have reports from team scouts and executives and those who will wear a Kings jersey for the first time once their name is called from the stage at the United Center.

Be on the lookout for a number of conversations with team figures tomorrow, and if you haven’t yet done so, here are three players whose names have come up in conversation and may be available around the 11th selection in the first round: Nick Suzuki, Elias Pettersson and Michael Rasmussen.

To kick off coverage from Chicago, Rob Blake spoke about what he’s looking to target with the team’s eight current selections. As it stands, the Kings have draft picks in the first round (11th overall), second round (41st), third round (72nd), fourth round (103rd and 118th), fifth round (134th and 138th) and sixth round (165th). | What is the history with these draft slots?

As is standard, the team will be looking for the best player available with each selection. But Blake did drop some hints at other needs and targets, and how it will affect the club’s decision-making.

“I don’t think its any secret we’re looking for offense, and especially with an 11th pick, you’re getting a high pick and you’re getting a quality player, so I think that factors in,” he said. “Also, our goaltender depth throughout the organization, we need to adjust to that, so I would imagine there’ll be an [opportunity] somewhere throughout the draft in the goaltender position if available. I don’t think anything really changes from before. We’re excited about the opportunity, being in position to have a higher pick that we haven’t had here in the past.”

While the team hasn’t been a frequent first round participant lately as picks and assets were often exchanged to extend the championship window, the club has been able to find contributors in the later rounds. Between the first round in 2009, and the fourth round in 2011, 16 of the 19 players the Kings selected have played in the NHL. That includes both seventh rounders, as both Jordan Nolan (186th overall) and Nic Dowd (198th overall) were chosen in 2009.

As for the other end of the draft, Blake said whether the team choose to move up or down “kind of depends on the 10 picks before.”

“Mark Yannetti’s been terrific with our amateur staff over the years here putting a game plan in place and adjusting to how it falls in that,” he said. “But I do think when you’re in that high of a position that you take the best player available. There’ll be some options there that we’ll look at, but again, they’ve done this routine for many years here as a group and they’ve been very successful at it, and we’re going to rely on them again.”

Rob Blake, on whether John Stevens offers input on players the team may select:
Well, like I said, I don’t think John is out watching these kids at all, so I’m not sure he has the input that Mark Yannetti and his staff have put into it. They’re the ones that’ve watched these players over the years. They put their list together and diligently went over it from top to bottom, so in that aspect, Mark Yannetti has a lot of control in this.

Blake, on any changes to draft preparation, given the changes atop management:
I don’t think it has been as different. I don’t think when we looked at things a month ago we thought there was much adjustment that had to be done on the amateur side. They’ve been able to accomplish a lot of things, they incorporate analytics, they research, they do their homework, and I’ve been able to sit through meetings – which I really hadn’t in the past been involved much on that side, so it was a good time to observe everything. But like I said, I think Mark Yannetti has it running very well. They have a history of producing in the draft. We haven’t had the higher picks in the last few years, and we’re fortunate we have one now, so that part might’ve changed. The focus becomes on that top pick rather than what we’ve had in the past here.

Blake, on any scenario in which the team moves up or down from the 11th pick:
Well, it hasn’t presented itself yet. Like I said, like most teams, you’ll look at all options, you’ll weigh ‘em, and if you think that betters your team, then you would do that, yes.

Blake, on weighing players who may be able to play earlier with those with a higher ceiling:
I’m not sure there’s a huge discrepancy in those players. Hopefully good players are going to play in the NHL. Like I said, when you get to that pick and you’re looking at the player, you’re looking at the overall picture, not whether he can jump in next year. It’s hard to play in the NHL right away. Teams struggle with that over and over. As far as we’re concerned, it’s probably the best player thhat’s available there who fits our need at that time is who we’ll take.