It didn’t end the way a pair of Kings prospects would’ve wanted it to, but who doesn’t love watching a championship-clinching overtime goal?

WATCH THIS: @TBLightning prospect @acirelli22 is the OT hero! 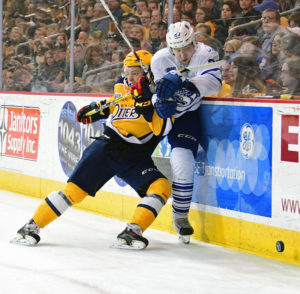 That was Tampa Bay Lightning third rounder Anthony Cirelli scoring at the 2:41 mark of overtime, leading the Erie Otters to a 4-3 win over the Mississauga Steelheads and a four games-to-one series triumph that brought the J. Ross Robertson cup to Western Pennsylvania for the first time since 2002. Taylor Raddysh completed his hat trick at 18:45 of the third period to force overtime, setting the stage for Cirelli’s golden goal. Spencer Watson (7th round / 2014), who was likely Ontario-bound before undergoing wrist surgery last off-season that erased the first half of his 2016-17 campaign, registered a goal and an assist and took 11 of the Steelheads’ 26 shots, while Jacob Moverare finished a plus-one in the defeat.

.@wagner2797 wires his 15th of the postseason as the @WHLPats close the gap to 6-4 in the 3rd. #WHLChampionship pic.twitter.com/JDblXLmwIx

Austin Wagner’s 15th goal of the playoffs wasn’t enough for the Regina Pats, who lost 7-4 to the Seattle Thunderbirds in Kent, Washington Friday night, and fell behind three games-to-two in the WHL Championship that left the T-Birds one win away from their first title. Should they win one of the final two potential games, scheduled for Sunday and Monday* in Regina, it would mark the first time since 1998 (Portland/Spokane) that two American clubs participated. Only eight of the 60 CHL clubs (Erie, Saginaw, Flint, Seattle, Spokane, Portland, Everett, Tri-City) are U.S.-based following the recent relocation of the Plymouth Whalers and the disbanding of the Lewiston MAINEiacs. That 1998 Memorial Cup, hosted by Spokane, was the last time the tournament was held in an American market. This is due mainly to the challenges of attracting Canadian corporate sponsors in the United States.