Nothing imminent with Toffoli 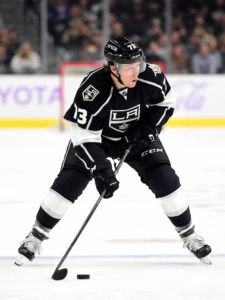 They’re both 1992-born forwards from Ontario who emerged as highly talented rookies during Los Angeles’ run to the 2014 Stanley Cup, and in the summer of 2017, they’re both in need of new contracts.

Scratch that – one of them is in need of a new contract. Tanner Pearson signed a four-year, $15-million deal with the Kings earlier this week, paving the way for the 24-goal scorer to remain with the club through the 2020-21 season.

That, of course, turns attention towards Tyler Toffoli, who scored 31 goals in 2015-16 but battled through injury in a down 2016-17 season, posting 16 goals and 34 points in 63 games. Based on conversations with hockey operations, there’s “nothing really going on” with regards to negotiations with Toffoli – at least not yet. The Scarborough, Ont. native is represented by CAA’s Pat Brisson, who negotiated Anze Kopitar’s eight-year, $80-million extension and represented close friends in Kings President Luc Robitaille and General Manager Rob Blake during their playing careers. It is clearly a priority to work out an extension with the talented young winger, and based on correspondence, talks are expected to pick up soon.

As Brisson noted when speaking Wednesday with Steve Kouleas on SiriusXM’s NHL Network, there are conversations coming.

“Tyler this year played on one leg. He was hurt,” said Brisson. “He missed 21 games, and I would say, honestly, I think he played probably another 20 on one leg, so, yeah, he had a little drop in his production as well as other players on the team, but he’s a true offensive threat out there. He’s a 25-to-35 goal scorer and still young, so he’s in a great position. You’ve got to identify your core. I think he’s a core player on the LA Kings. He’s a top-six forward, so we’ll be talking here shortly. His deal is up about [and we’ll talk about] what we could potentially do.”

As a restricted free agent, Toffoli would be sent a qualifying offer in late June if no contract terms were agreed to before then. A qualifying offer would allow Los Angeles to retain Toffoli’s rights and continue its negotiations without having him become an unrestricted free agent. It’s not really worth getting into a complicated discussion of arbitration at this point, because the vast majority of restricted free agents work out new contracts with their teams before that stage, and the Kings have made it clear that they are “actively working diligently” to ensure that both he and Pearson are under contract with the team next season. “They want to be here and we want them to be here,” a source told LA Kings Insider late last week while also noting that there has never been any discussion at any point of either Toffoli or Pearson playing anywhere but Los Angeles else in 2017-18.

Financials are still evolving due to expected ongoing roster turnover, the expansion draft and free agency, but at this moment, the Kings have approximately $62.15 invested in 16 players for the 2017-18 season, according to financials provided by Cap Friendly. Preliminary estimations have next season’s salary cap rising to $75.5-76M, though it’s contingent on the players choosing to exercise the 5% escalator. Hypothetically, were Gaborik to be placed on LTIR at the start of the season, they could regain nearly all of his $4.875M cap hit, which would give them nearly $15.73M to allot to up to seven players. In addition to Toffoli, who will command the highest percentage of the remaining share, other restricted free agents include Nick Shore, Andy Andreoff, Kevin Gravel, Paul LaDue, Jonny Brodzinski and Michael Mersch, among others. While LTIR is highly speculative as it relates to Gaborik, it is surely a mechanism the front office will consider.