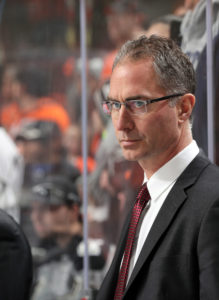 It was clear when speaking with Vice President/General Manager Rob Blake at Tuesday’s press conference that the top priority early in his tenure would be to find the club’s next head coach.

“There are other vacancies, obviously,” he said, two days before Vegas introduced Gerard Gallant as the first coach in Golden Knights history on Thursday. “You don’t want to be left looking around and everything. I think a priority here the next few weeks is for us to get that down, and then you move on. You’ve got the draft and you’ve got expansion and all these things, but I think for us, the coach is a very important part of that.”

On Tuesday, Blake spoke about wanting to evaluate the staff in place, and that ultimately led to the dismissal of Assistant Coach Davis Payne later that day. Both Payne and Associate Head Coach John Stevens were referenced by a Fort Lauderdale Sun Sentinal report as those with ties to Florida’s coaching search.

Meanwhile, Blake has prioritized a thorough evaluation of Stevens and is in the process of considering the styles and philosophies he would bring as the club’s head coach before deciding whether the search would expand to other candidates, according to a source. That effort is currently ongoing and will continue, and was also reported by Pierre LeBrun and Darren Dreger earlier Thursday.

Rob Blake and Kings management are in process of looking at John Stevens and current staff as head coach candidates before expanding search.

Helene Elliott of the Los Angeles Times also wrote about the club’s initial focus on Stevens in a story on Mike Futa’s promotion to Assistant General Manager that appeared in this morning’s newspaper.

Blake spoke on Tuesday about the team’s clear need to increase scoring, and it would be expected that the conversations with Stevens would key in on this particular topic, among many others.

“Hiring a coach and a philosophy for the coach is of upmost importance but there will be time involved,” Blake said.

Stevens, who won a pair of Stanley Cups on Darryl Sutter’s staff, was promoted from Assistant Coach to Associate Head Coach shortly after the team’s 2014 run. That season, he had drawn consideration for head coaching openings in Carolina, Pittsburgh, and possibly Vancouver, though it was a priority for Los Angeles to keep him on staff.

Available figures who coached NHL teams in 2016-17 but are currently without a job for 2016-17 are Willie Desjardins, who coached the Canucks, and Lindy Ruff, who coached the Stars. Reports have indicated Blake favors those with NHL head coaching experience.