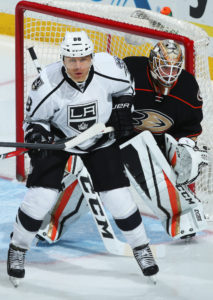 Reiterating the sentiments he shared Sunday night, Jarome Iginla, on a Wednesday conference call, spoke about his desire to return, with conditions, for his 40-year-old season in the National Hockey League.

As he noted on Sunday night, when he said he “definitely would like to play more than call it a day,” this is likely a decision that he will come to with his family. But there certainly appears to be a desire to continue his playing career, and his ability and leadership was well illustrated during his six weeks in Los Angeles.

Los Angeles, meanwhile, has recently reformed and transitioned several executive positions in hockey operations, and at this point, there’s too much of an unknown as to whether the team is currently focused on extending the partnership. From the player’s perspective, even though Darryl Sutter is no longer at the helm of the club, a branch has been extended.

“I don’t know if they’re an option from their point of view,” he said. “I know obviously they have to take time and do what they do in their analysis, but from my point of view that would be an option. I did enjoy it. For me, part of it was also getting a chance to play for Darryl again, and that was very exciting and I really enjoyed that part, but also it is a top organization. You go there and see the core that they have with Doughty, Muzzin, some of the young D, one of the best goalies in the world, some of the best centerman in the world with Carter and Kopitar, so there are so many things that, I know it’s a tough time there right now, but if anyone can turn it around quickly, they’d be one of the organizations with that kind of core that can bounce back and have a great year, so from my point of view, that would be possible down the road if that was an option.”

Iginla is coming off a three-year, $16-million contract signed on July 1, 2014. Were he to re-sign with the Kings, Colorado would receive Los Angeles’ 2018 fourth round draft pick as part of the conditions of his March 1 trade. He is due to become a free agent on July 1, his 40th birthday.

Jarome Iginla, on coming to a decision about wanting to return:
Before I went to LA I was within a tough year and it’s tough on everybody that’s part of the organization and the team in Colorado/ so when I was mulling over my future, [I was] 50/50 maybe and not sure sometimes. I thought maybe it’s time or next year and sometimes you play and you definitely want to keep playing, so probably 50/50. But going to LA, it was a really good experience to be back and it was fun and to play with the group there and to get a good opportunity and to play in meaningful [games] – I know we didn’t make it but up until our last four – every game felt like a big deal and it was a big deal in the standings. It was exciting, but I’d like to keep playing.

Iginla, on when he began to feel comfortable with the Kings:
When I went there my confidence wasn’t as high, and as players you go through that over the course of your career. Unfortunately it sounds like the longer you play you should never go through that, but you do and sometimes during seasons, sometimes it lasts longer. And when I went there, it definitely took a little bit, but talking with Darryl, he’s working with me and the coaching staff to try to relax a little bit. You don’t realize some of the habits that you get yourself into as far as having composure and trying to do a little bit and then sometimes you get too simple and try to do things that I’m not. There are certain things that I am as a player and have some strength and have weaknesses and getting back there, Darryl just wanted me to, and he helped me. He helped me to focus on some of those strengths and to have confidence and believe that I can still be a helpful player and do some good things. So when was it? Honestly, it took a little bit, but almost a little bit throughout it’s almost like a work in progress. Really, the whole time there were some good games and some good days and then some days where you kind of slip back and are not as effective or confident, but I think saying that, that’s part of what our season is, too, right? It never goes perfect during the year. It’s one of those things where it’s a short period so I’m thinking of it all the time. Every day you’re trying to get back to – each day every game was so important you’re trying to get right back at it, but it definitely came up and I did feel that getting a chance to play with Kopitar and Carter and some of the guys I got to play with there, you get back to, you know, you’re just trying to get open and trying to get to the net. Trying to get in on the forecheck, things that were a little bit more basic that I’ve been able to do over my career and not worry about trying to be a type of player that I’m not. Trying to just skate as opposed to do some things with the puck and shoot and get open and stuff like that.

Iginla, on convincing teams he’s ready to play another season:
Well, I have no idea what it will be. I’m not sure where that’s at and I understand, yeah, coming in and I will be 40 in the summer and coming off of really my toughest year that I’ve had in my career. I look back and it was, it was a tough year. But I’m also thankful that, looking back I haven’t had a lot of those tough years and I would like that chance to – and I really do think I can do better, but what we’ll see where that’s at. The other thing is part of it is also understanding I’m not maybe as good or as prolific a goal-scorer, point producer, whatever. But I can still do, I think I can still have a really good year and be effective for teams and compete hard and battle and stuff like that and try to do some of the strengths that I do or have been able to do as a player. I’m not saying I’m going to score 50 goals. I don’t know what that’ll be at or things like that but I think I can still do other things effectively that can be helpful on a team. But yeah, I’m not sure what, that’s why when the question is will I want to play next year, I don’t know for sure, because I have to see what the options are, and there’s just kind of a wait-and-see and I’ll go from there.

Iginla, on the mood in the room before and after being eliminated from playoff contention:
Well, we weren’t eliminated until the last four games so it’s really the one week and until you’re eliminated, but honestly, it’s like you still believe you can have a shot. It’s sports. I know there’s long shots, but you just keep trying to go and win one and go from there so you’re still focused in that area, but when you’re eliminated, those games are not easy to play. Part of hockey and especially the make-up of certain teams is the intensity and the physical style and you find a little more energy when there’s more on the line and that comes naturally. But once you get out there and you’re eliminated, they don’t mean as much, but once you start playing you want to win them. But it’s not the same. That’s why the playoffs, they’re that much more fun. There’s more on the line, it’s competing even harder and you can watch, you say ‘we’ll do it all year,’ but you just find more, mentally and physically. Big surprise of when I got there? It wasn’t so much about surprises, because I’ve watched these guys, played against them, watched them have success. The core of the group. I think it was more affirmation of how good they are. Kopi is a great two-way centerman but he’s a great guy to play with as a shooting winger because he’s a great disher, he can score. Carter, his speed for as big as he is, great shot, his speed is awesome. I already knew about Doughty. Played with him at the Olympics. See him all the time. Norris winner. You play with him and you can see why and you can see that he deserves it and just how important he is. Quick in net. What a competitor and how he reads the plays and truly one of the top goalies. So it’s kind of things that I already knew but sometimes you see players I guess, maybe it’s the opposite. And maybe you’re like, ‘Well, yeah, they’re good but…’ Maybe you expect more but they were everything that before from playing against them and they’re that good, you know what I mean? 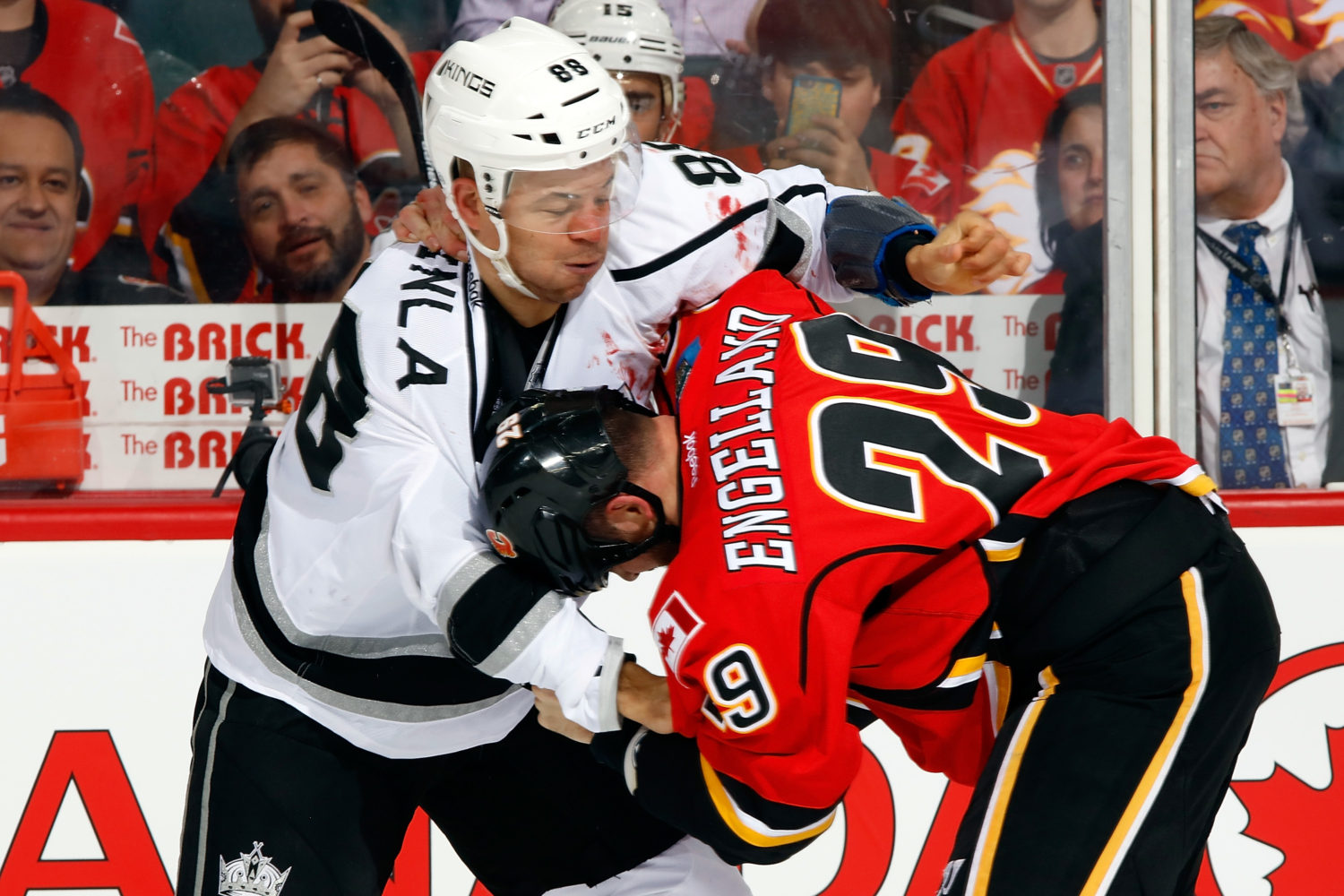