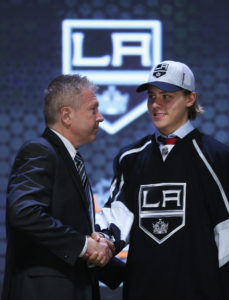 Futa’s ascension was well-earned and expected, given the praise he was offered at yesterday’s press conference and the open position previously occupied by Blake. “Mike has been tremendous and we’re going to sit with him over the next couple days, and there are vacant positions and I think at the end of the day I’m going to lean tremendously on him,” Blake said. “His success that he’s had here with the draft and the Ontario League and what he’s done professionally, we’ll come with an agreement there shortly.”

When I asked Blake yesterday about who would fill the role of Ontario Reign General Manager, he said that he intended to keep “the format that we operated,” so expect Futa to take on personnel roles related to the club’s top affiliate. Futa had interviewed for the Buffalo general manager job that went to Tim Murray in 2013 and had been approached by Vancouver that season and later told LA Kings Insider during the club’s playoff run that spring that another team had explored the possibility of him filling their assistant general manager opening before Dean Lombardi had “made it quite clear” that the team needed his services while continuing to build the organization.

During the Kings-Ducks series in May, 2014, the team announced that he had been promoted to the VP of Hockey Operations and Director of Player Personnel role that allowed him to serve as a liaison between upper management and the team’s professional and amateur scouting staffs. In a previous role as co-Director of Amateur Scouting, Futa, along with Mark Yannetti, was among those responsible for re-forming the team’s amateur scouting department and incorporating what had previously been a deep prospect pool into players who developed under the club’s watch and took on roles during the two Stanley Cup runs.

Futa, the former General Manager of the Owen Sound Attack, will begin his 11th season in the organization this coming fall.

Futa most recently served as Kings Vice President, Hockey Operations and Director of Player Personnel. This upcoming season will be Futa’s 11th season with the Kings.

“Mike has made tremendous contributions to our hockey club over the years and he will be one of several people we are going to internally lean on,” Blake said. “He and his department have enjoyed success here both with the NHL Draft and the Ontario Hockey League in particular, and we look forward to additional success in the immediate future.”

Futa recently concluded his 10th full season with the Kings, and third in his most recent position. He was named VP of Hockey Operations and Director of Player Personnel in May of 2014 after serving as Director of Amateur Scouting, a position he assumed on June 5, 2007, when he originally joined the Kings.

Futa came to the Kings when he was appointed Co-Director of Amateur Scouting along with Mark Yannetti. Together, Futa and Yannetti rebuilt and retooled the entire Kings Amateur Scouting staff.

Futa came to the Kings after five successful seasons as General Manager of the Owen Sound Attack of the Ontario Hockey League (OHL), where he was named OHL Executive of the Year in 2005. Futa also served as Director of Team Ontario’s Under-17 program for three seasons.

Before turning to the coaching ranks, Futa played four seasons of professional hockey in Europe (two seasons in Germany and two seasons in Denmark). The former left wing also captained his team at York University, where he was also honored as the student who best combined academics and athletics at the school during his senior season.