A few additional bits on the coaching search 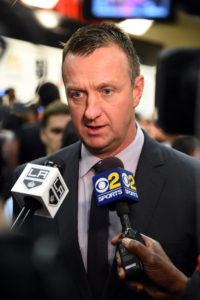 Several head coaching notes to pass along: There’s nothing breaking at this point, and yesterday’s media availability with Dan Beckerman, Luc Robitaille and Rob Blake, along with the team’s captains, was more about sharing general visions moving forward than laying the blueprint of any concrete plans. But there were quite a few interesting notes, beginning with Sportsnet’s Elliotte Friedman, who shared some insight on the search and threw some love the Ontario Reign Insider’s way.

4. In Los Angeles, GM Rob Blake said his next bench boss would have NHL head coaching experience. That rules out my dark horse: Washington assistant Todd Reirden, who went deep into the process with Calgary last summer. The two have the Bowling Green connection, with Blake finishing the year before Reirden arrived.

For a few years now, we’ve assumed John Stevens would succeed Darryl Sutter, but it appears there are no guarantees, although Stevens will get a chance to interview for the job. All the comments about offence remind me of Larry Bird’s decision to fire Frank Vogel at Indiana last season, saying, “We’ve got to score more points” as Vogel said he’d do anything to keep the job.

The word in league coaching circles is that Los Angeles will be searching for bright, offensive minds. And even if that type of person is not chosen as head coach, there will be another opportunity in an “offensive co-ordinator” style position. Wonder if their AHL coach, Mike Stothers, gets a spot on the bench as some of his guys get an NHL shot. If so, I will miss his “text messages from the bus” with reporter Lindsay Czarnecki.

Click here for the full 30 Thoughts, which contains additional information on last summer’s decision to retain Darryl Sutter and a note that “if Lombardi stayed, the Kings would take a shot at keeping Ben Bishop.” There’s also a great bit on emailing with Dean Lombardi, and yes, Elliotte’s story is right in line with the back-and-forths many of us have experienced. The majority of the emails we exchanged with Dean were not necessarily related to hockey, or at least not always filled with discussions about the team(s) he oversaw. Lombardi has a strong presence and is one of the most interesting, intelligent and analytical minds in the sport, and his absence takes an additional moment or two to come to full terms with.

Meanwhile, additional quotes on coaching and team philosophies that did not make it into yesterday’s stories:

Rob Blake, on whether there’s a group of coaches under consideration:
I don’t think I’ve looked at it in depth enough to really give you a full answer on that. I do want to evaluate the staff that’s in place there right now. Like you touched on, the defensive aspect of things and where our team is ranked, that’s the staff that’s run that. They have that part figured out. Now, if they have creative ideas or things that will help get us to another spot there, then I need to listen to them probably first.

Blake, on whether finding a coach is the priority of the early stages of the off-season:
Yeah, I would think so. I mean, just quickly, looking calendar-wise, I think that is. There are other vacancies, obviously. You don’t want to be left looking around and everything. I think a priority here the next few weeks is for us to get that down, and then you move on. You’ve got the draft and you’ve got expansion and all these things, but I think for us, the coach is a very important part of that.

Blake, on whether they’ve identified any candidates for the head coaching job:
I mean obviously with the hectic day yesterday and the circumstances surrounding there, we have to kind of step aside here and go through a whole list of things so all that will be obviously in the mix. Hiring a coach and a philosophy for the coach is of upmost importance but there will be time involved. [Reporter: So you haven’t made a decision specifically on Stevens and Payne?] No.

Blake, on what he’s learned from Dean Lombardi when working as assistant general manager:
Listen, if you could get into a situation for four or five years and be an understudy and sit and watch somebody put this organization together; it’s tremendous. The utmost respect for what he’s been able to accomplish. Like I said, you look at the core and they’re in their prime and he’s been able to do that. He built a culture here. Started this culture. And we need to continue it. And listen, yesterday was a tough, tough day. But I have the utmost respect for Dean Lombardi and what he’s been able to teach me and to lead me through.

Anze Kopitar, on whether he and his teammates are “doing a bit of soul-searching”:
Yeah they’ll be something. I’ve said it after the last game, we can’t forget that feeling after the last game, when you know you didn’t make the playoffs, and we’ve got to take that feeling and turn it into a motivation for next year. And there’s definitely going to be some soul-searching and we’ve got to make sure we’ll be ready next year.

Kopitar, on whether he anticipates any culture changes within the organization:
No. I don’t think it should at all. I think our locker room, it’s probably as tight as it gets. So we certainly do not want to change that. We want to stay with the same culture and stay with the same mentality and then build on top of that. That’s what it’s all about. I think that’s where the memories are created, when you push and when you push for the better.

Kopitar, on whether he agrees with the idea that the game is getting faster:
Yeah. I mean, to a certain extent, yeah for sure. I think it certainly seems that even in the West now the teams are getting smaller and quicker, you know, so yeah that’s a change that maybe we are trending towards a little bit. But at the same time, I still think that you have to have some big bodies and that’s what we’ve got. I don’t think it was the size and the speed, we just didn’t play to our very potential, I think, this year and that’s why we are where we are.

Kopitar, on how Sutter made him a better player:
Well he wanted me to be a little bit more aggressive and obviously playing with the puck more and being good on the defensive side because usually when you’re good on the D-side of things you’re going to have the puck a lot more and then that’s where my kind of hockey sense takes over and it’s obviously a lot more fun playing with the puck then chasing it.