Going pro was a no-brainer for Roy, but adjustment period starts now

This is just the beginning for Matt Roy and the decision to go pro and forgo his senior season was a no-brainer: “Absolutely. Once I had the opportunity to come out here, I jumped on it,” he said earlier this week.

“My season ended on [a] Saturday and so I traveled back with my teammates, back to school at Michigan Tech and I had an offer the next day,” Roy recalled. “I was lucky enough to sign it that Sunday night and started the process of moving out on Monday.”

The 22-year-old, 6-foot, 200-pound defenseman signed a two-year entry level contract with the Kings on March 27. Since then, he’s reported to the Reign and dressed in all three games he’s been eligible to play, making his pro debut on March 31 against Bakersfield. In his second game, he earned his first assist on a secondary helper by moving the puck on the blue line to Cameron Schilling, whose shot was tipped in by Joel Lowry.

Through three games, playing mostly alongside Zac Leslie, Roy has an assist, two penalty minutes and a minus-two rating.

“I think he did pretty good,” head coach Mike Stothers said of Roy’s debut. “I didn’t really know what to expect from Matty. I’ve seen him at development camp. I’ve seen him doing off-ice workouts and stuff like that. Looks good, but until you get in a game situation. He’s a bigger body than I thought, too. He’s a pretty thick kid. I thought he played a steady game. I wouldn’t say he was flashy by any stretch but he got around the ice, he made some good passes. Got an assist doing what he should be doing. It’s tough. It’s hard for those guys to come in. Sometimes you’re taking a spot of someone who’s been here all year or just coming in and not knowing anybody. It can be awkward.

“He seems like a good kid. When they first come here they’re all pretty quiet.”

His teammates though have been there to help with the transition on and off the ice. Some of the Reign’s players who have been through the college to pro leap understand what Roy is going through.

“I think he’s doing well,” said forward Joel Lowry, who played at Cornell, on Monday. “It’s obviously a big jump from college. A lot of us have made that jump and know how it is.”

Roy is currently rooming in a hotel with Quentin Shore, the younger brother of Kings forward Nick Shore, who Roy said is “showing me the ropes and taking care of me.” Before his first game, assistant captain Michael Mersch helped calm his nerves and gave Roy what he said was the best advice he’s received from a teammate so far.

“It’s nice in the locker room the guys kept me loose a little bit,” Roy said. “Once I got my first shift out of the way I felt comfortable. The game seemed a little bit more my style, more structured. The guys were talking to me all weekend, helping me out as best they could so it’s been good.

“Merschy said it’s just another hockey game. Just relax, just go play your game. He congratulated me on having my first game there and it was good to have him out there.”

Away from the rink, when Roy left Michigan Tech he brought his studies with him and the work from his handful of classes to finish out the school year for his Sports and Fitness Management major. Last Sunday served as a homework cram day but the double duty between wrapping up school and taking on the world of AHL hockey hasn’t been easy. “Right now I’m just trying to focus as much on hockey as I can and hoping my teachers will help me out,” he said.

This late-season Black Ace role is one of a crash course in getting-to-know-yous and more. On the ice, there’s only a little bit of previous experience with the Kings organization for Roy to draw from and the level of play is escalated.

“At development camp I met some of the guys there, skated with them,” said Roy, whose drawn puck-moving comparisons to Paul LaDue. “The coaching staff, they worked with us last year a bit. I’m not too familiar but at least I have a little bit of a foundation with them. Right now we’re just building off of that, so it’s been good.”

“The tempo’s a lot faster in practices here,” he added. “There’s not a lot of water breaks or anything, you’re just go, go, go the whole time. That’s been the biggest adjustment for me so far.” 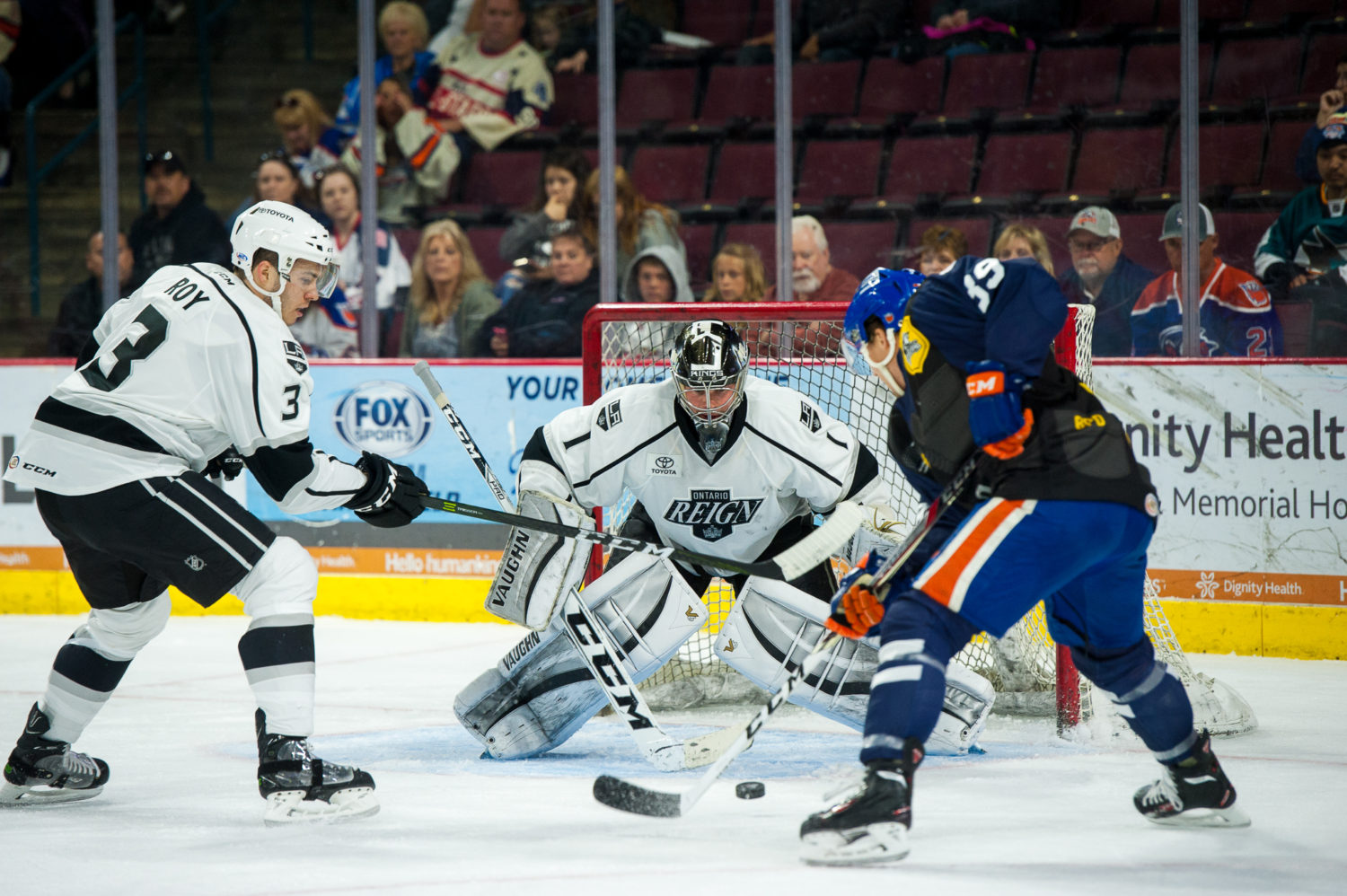