“A very good student of the game,” LaDue acclimating quickly

Paul LaDue, who has all of nine games of NHL experience, was on the ice for both regulation power play goals against the Nashville Predators in Thursday’s overtime win.

That, of course, meant that he got to hug Jarome Iginla, who was playing his 1,538th NHL game and potted the 620th and 621st goals of a career that will culminate with a plaque at the corner of Yonge and Front Street in downtown Toronto.

“I was a little star-struck first time [Iginla] walked into the locker room but yeah it was unbelievable,” LaDue said. “Yeah, him and Marian Gaborik were out there with me, so it’s a little crazy knowing I grew up watching them play, but they’ve been great guys and they’ve been playing so well, so it’s been fun hockey. We’ve just got to keep moving forward.”

In that late season push, LaDue has been playing an important part. His value was on display in Thursday’s game as he played an assertive role in using his skating not only to work his way out of trouble and calm plays down the defensive zone – as has been part of his reputation – but in picking spots to jump into the play in the attacking end. He notched an assist and registered two shots on goal over 18:27 of ice time, 2:04 of which was spent on the power play.

“When young players come up here, it’s a different level, especially this time of year,” Associate Coach John Stevens said. “Every game has huge implications in terms of playoff positioning and you’re playing against the best players in the world, so I think you’re finding a few feet here, a few feet there, a little bit casual here, a little bit casual there can get you in trouble in a hurry, so I think he’s just realizing how important every shift is, and how important it is to play with a sense of urgency all the time. Not that you’re panicking out there, I think, but you just have a real intensity about your game … because if you don’t, it can go in your net in a hurry or put you in a situation where your team’s going to get hurt in a hurry.”

Many of those sentiments were echoed by Mike O’Connell of the team’s development staff, who noted that since LaDue has joined the parent club, he has done a better job preparing for every shift and taking stock of the type of players he’s facing. Some shifts will come against hard-nosed power forwards, some will come against highly skilled waterbugs. Some will come against first lines, some against fourth lines. In a game against the Washington Capitals on Saturday, he’s going to face a diverse array of competition that has boosted the Metropolitan Division club to the top of the NHL standings. 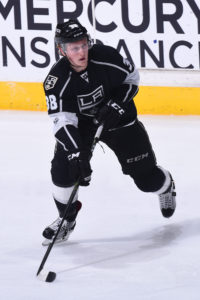 “You just learn their styles and you’ve got to know your opponent,” he said. “A team like (Nashville) last night, they’re pretty skilled up front, so you’ve got to respect them, but at the same time you’ve got to get on them quick and play them physical, so it definitely helps out knowing the players and kind of getting used to the league.”

The former University of North Dakota defender is also a quick and absorbent learner, something gathered by the organization during his mid-summer development camp stints and in through his experience in the American Hockey League.

“We’ll get to know him in a hurry,” Stevens said. “I mean, we’ve got a pretty good book on him. We’ve had him in the organization for years. We talk to our minor league coaches a lot and our development team a lot in terms of how he’s come along and what he’s been like to work with. We had a chance to see him in the summer in development camp, so there’s a good, strong relationship there with Paul, but until you get him here and he sees the league, but I think in terms of the relationship, knowing his personality, how he responds to different things, that groundwork’s been laid for years now, so we’re getting an opportunity to put it to work.”

He’s not the only young defenseman being placed in a key role that the team needs quality minutes from. The NHL is not a developmental league, as Darryl Sutter often reminds reporters, and Los Angeles has received good mileage from both he and Derek Forbort, who has all of 80 NHL games under his name and averages over 20 solid minutes per night of a team battling for a playoff spot. Kevin Gravel has also shown promise as a versatile defenseman capable of playing both sides and operating with poise.

But LaDue, a 2012 sixth round draft pick who was clearly at the top of the list of the team’s AHL-based defensive prospects to have spent most of the season in Ontario after a standout training camp, etched out one of his most noticeable performances in the win over Nashville.

“He’s been really good,” Stevens said. “It was unfortunate – we played a really good game in Anaheim and then got hurt late in that game and he kind of got set back a little bit with some time off, but then he’s come back strong. With Paul, like anybody else, we were looking for consistency in his game, but he’s a very good student of the game. You tell him things, you can see he takes it in, he implements it into his game right away, he can understand what you’re trying to do. I mean, he’s getting a great opportunity to play in a lot of situations. He hasn’t really killed many penalties yet, but he will. He’s got a chance to play second unit power play and he’s done a good job there, and he’s getting to play some meaningful minutes against top guys on the ice, so it’s agreat opportunity that we want him to take advantage of.”

John Stevens, on whether the team’s structure and checking eases acclimation for young players:
It’s probably more comfortable for him because he’s good at that stuff. Paul’s a good defender of the rush and he’s learned to be a good defender down low where he can handle plays and get plays sealed off and be a good competitor in the one-on-one battle situations, so I think he takes a lot of pride in his game. If you watched him at North Dakota, that’s what he was. He’s a real good defender, checker, get the puck back and make a play out of th zone, and that’s exactly what we want him to do here. I think he really fits our style of game and the way we want to play, and obviously he’s done a good job in Ontario up to this point, and now he’s getting an opportunity to do it here.

Paul LaDue, on what he liked about his game against the Predators:
I thought I was moving the puck well and defensively I felt pretty comfortable out there, so it’s always nice to get a good team win and feel good about your play, so I’ve just got to keep moving forward.

LaDue, on the progression in his play from game to game:
I mean, every game you can get in, it’s just a sense of comfortability out there and I definitely feel a lot more settled down than I did earlier on, so I think it definitely helps getting these games in and I’ve just got to keep trying to improve and keep trying to get better.

LaDue, on whether he has more offensive potential to his game:
Yeah, I think so. Obviously that’s one area that I always want to work on and keep improving and that’s the fun side of the rink to play in so. I’ve been pretty happy with what I’ve put forth so far but I know I can be better and I’ve just to keep working on getting shots through and getting pucks to the net.

LaDue, on whether he watches games on TV differently than before:
Not really. I’ve just always watched and tried to pick up on little things. Usually watch D-men do their thing out there but no, not really. It’s definitely a little different watching guys that you’ve played against now but just understanding the speed and pace of the game, it almost makes it more enjoyable watching and it makes it almost easier to pick up things from other guys.

LaDue, on whether any players talk to him about his play:
You know, I think all our guys have been very talkative and helpful for our young guys and that’s huge. I mean, I couldn’t have done it without everyone helping you out and being supportive and giving you a little advice here and there that’ll just help the young guys grow, and everyone in this locker room has been great.

LaDue, on his power play unit “clicking” against the Predators:
Yeah, we were just moving pucks around quickly. Not trying to force anything, kind of making the play when it was there and a couple lucky bounces just getting pucks through to the net and good poise out front to bury those pucks. So it was good and hopefully we can keep working and keep producing for our team.

LaDue, on his expectations for himself before the season started:
You know, I try not to look forward too much. Just try to get better every day, and obviously I hoped that I would eventually end up here and now that I have I’m pretty excited but you’ve got to take advantage of the opportunity and just keep working hard and hopefully we can keep winning.

LaDue, on whether he thought he would be playing with the Kings down the stretch:
You know, I always hoped for it but I never knew what was going to play out. Like I said, I try not to think about it too much, but it is pretty crazy being up here and I’m thankful for it and I’ve just got to keep working.

LaDue, on his “welcome to the NHL” moment in his first game:
Yeah I think that whole first period was kind of a — I kind of blacked out that whole first period. But no, I settled down a little bit and it was all good, but playing in that first game in the same rink where we won the national championship – that was a pretty cool moment. So that was fun to be able to do that and good to get my first games in. 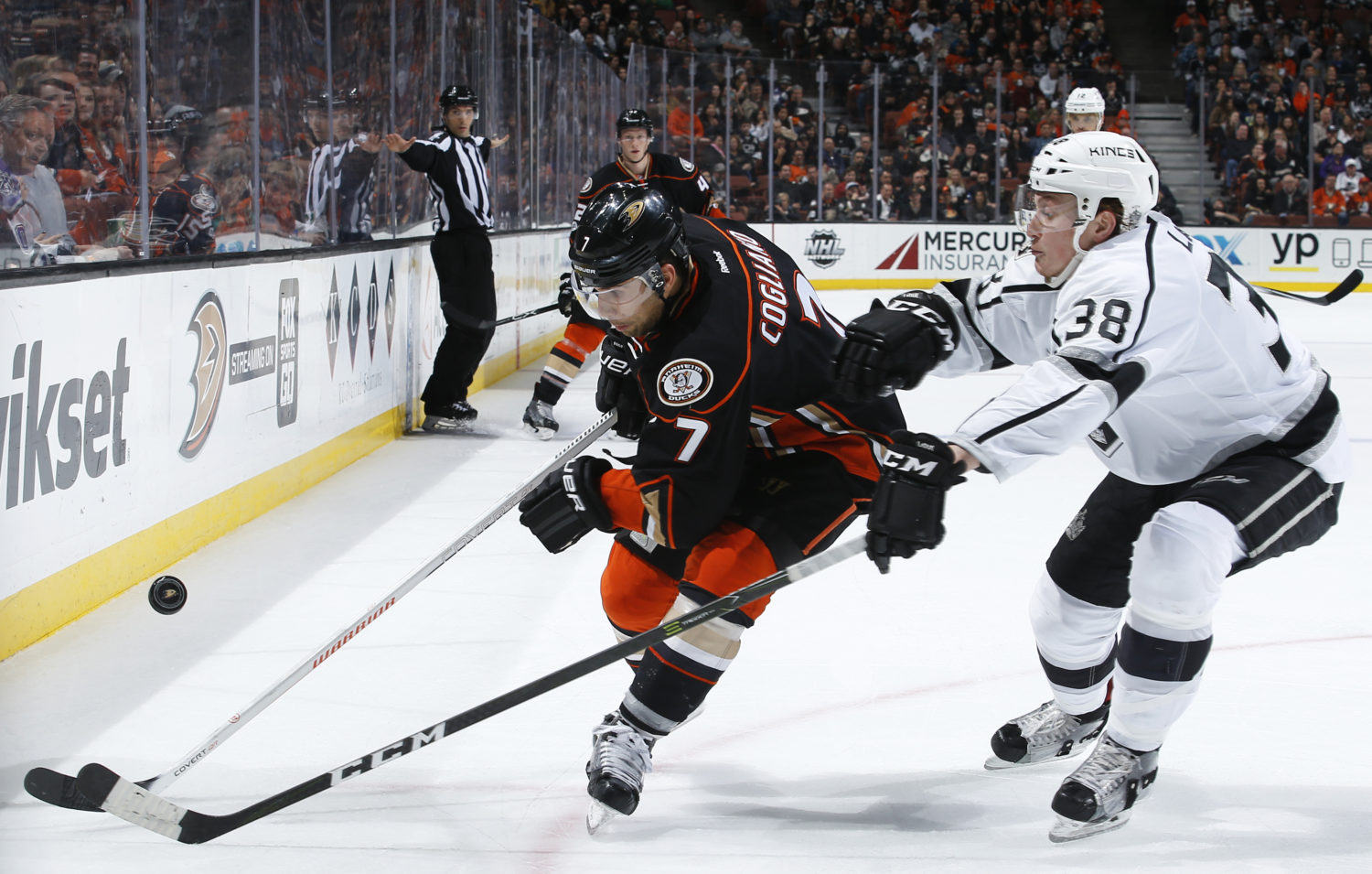