What do Ranford, Bishop work on? What was that Sutter-Bishop conversation? - LA Kings Insider

What do Ranford, Bishop work on? What was that Sutter-Bishop conversation?

In the third period of Thursday night’s game, Jonathan Quick, as he often does in this situation, skated back to the bench for an extra attacker when the Los Angeles net became dislodged and the Kings maintained possession. Had the Maple Leafs touched the puck, the play would have been whistled dead, so there was no harm in some clever game strategy.

This, though, is an unorthodox practice. It was so unconventional that it surprised Ben Bishop, who was yelling at Quick from the bench to return to the crease, perhaps thinking that his fellow goalie had mistakenly seen a delayed penalty that hadn’t actually been called.

As Bishop explained on Friday, that’s when Darryl Sutter appeared behind him to explain that Quick is always ready to skate back to the bench to gain an extra attacker on the ice for several seconds.

There’s not a massive amount that the accomplished Bishop needs to be taught as a Kings goaltender, though. Obviously it’s necessary to learn the requirements of the team’s systems play and communications with defensemen, but as a former conference champion with 253 career starts, a 2.32 goals-against average, .919 save percentage and 16 shutouts, his resume indicates proficiency unmatched by any so-called 1-B goaltender in the league.

With that in mind, what does Goaltending Coach Bill Ranford work on with such a highly qualified new goalie, some 64 games into the season?

“Basically just some of my fundamentals that I think are important and basically introduce him, and I kind of take the analogy, you have a toolbox, you give him some tools. If they work, you throw ‘em in the toolbox, if they don’t, you chuck ‘em out,” Ranford said. “That’s basically what we’ve talked about. He’s played at a very high level, and he’s obviously doing something right to play at the level he’s played at. So I’m just trying to do a few tweaks to adjust to our system of what we try and do defensively. That’s about all we’ve done.”

On Friday, both Ranford and Bishop explained their work together, and how Bishop’s unique background has prepared him for some important starts for the Kings late in a regular season in which Los Angeles is chasing a playoff berth.

Bill Ranford, on Ben Bishop using his stick around the crease to disrupt plays:
As far as the use of the stick, I think him and Jonathan Quick are very alike. They’re very good at taking away lanes. Obviously he’s a little bit more active playing the puck than we’ve had with any of our goalies here, so that’s something we’ll work on as a group to adjust to, and it’s to our advantage. He’ll go after pucks a little bit more, and that’s going to be a benefit to us.

Ranford, on working with Bishop in what is now a strong two-goaltender system:
Well, we’ve got points in every single game, which we haven’t done in a long time, is the big part. Boods did a heck of a job for us, but there was a definite understanding that we needed two guys down the stretch, and there was obviously the question mark in health in Jonathan Quick. I think the organization felt that we needed another 1A just in case he wasn’t able to come back. And that’s nothing against Boods, because Boods played great for us. When he left us he was the top of the league in every category, but we just felt he was running out of gas and our team needed a little jolt.

Ben Bishop, on working with Bill Ranford:
We have our philosophies and we talk every day about things, but then when you come here, you get another set of eyes at this level. Billy’s obviously one of the best. He’s here for a reason, so when you can get critiqued by other guys, it’s kind of nice to have another set of eyes to look at you and try to help you, because he’s just trying to make me better. It’s nice to hear a new voice, and I’m excited for it because he’s already told me a couple things where it’s like, ‘yeah, yeah, yeah. Always nice to have nother set of eyes wathicng you and giving you tips. It’s exciting for me. It’s kind of like a little kid – I’m excited to come to work every day and learn something new, and he’s had a lot of success with a lot of goalies. You look at the guys who have come through here, he definitely knows what he’s talking about. I’m excited to just pick up some little things, and like you said, he’s a good guy. He’s not sitting here trying to change me or anything like that, he’s just pointing things out here and there, and so far the last couple days, hes already taught me a couple things. It’s exciting. It makes it fun to come to the rink and skate and learn something new.

Bishop, on how he became proficient in using his goalie stick:
I started out as a forward when I was a kid, and I always loved scoring goals. I was one of one of the leading scorers and points guys on the team when I was a little kid, so I was always messing around in the driveway, on the ice. Even when I became goalie, before practice and stuff, I would always be shooting pucks and skating around and trying to score goals, pretending like I’m a forward. I never had any intentions of getting really good at playing the puck, it was just something I enjoyed doing, and obviously it just evolved, evolved, evolved into what it is today. We still work on it today at this level, day in and day out. You can still get better at it, but it’s just something that happened over time and turned into what it is.

Practice photos via Jon Bradley (Bishop is wearing a temporary helmet, not his official new helmet) 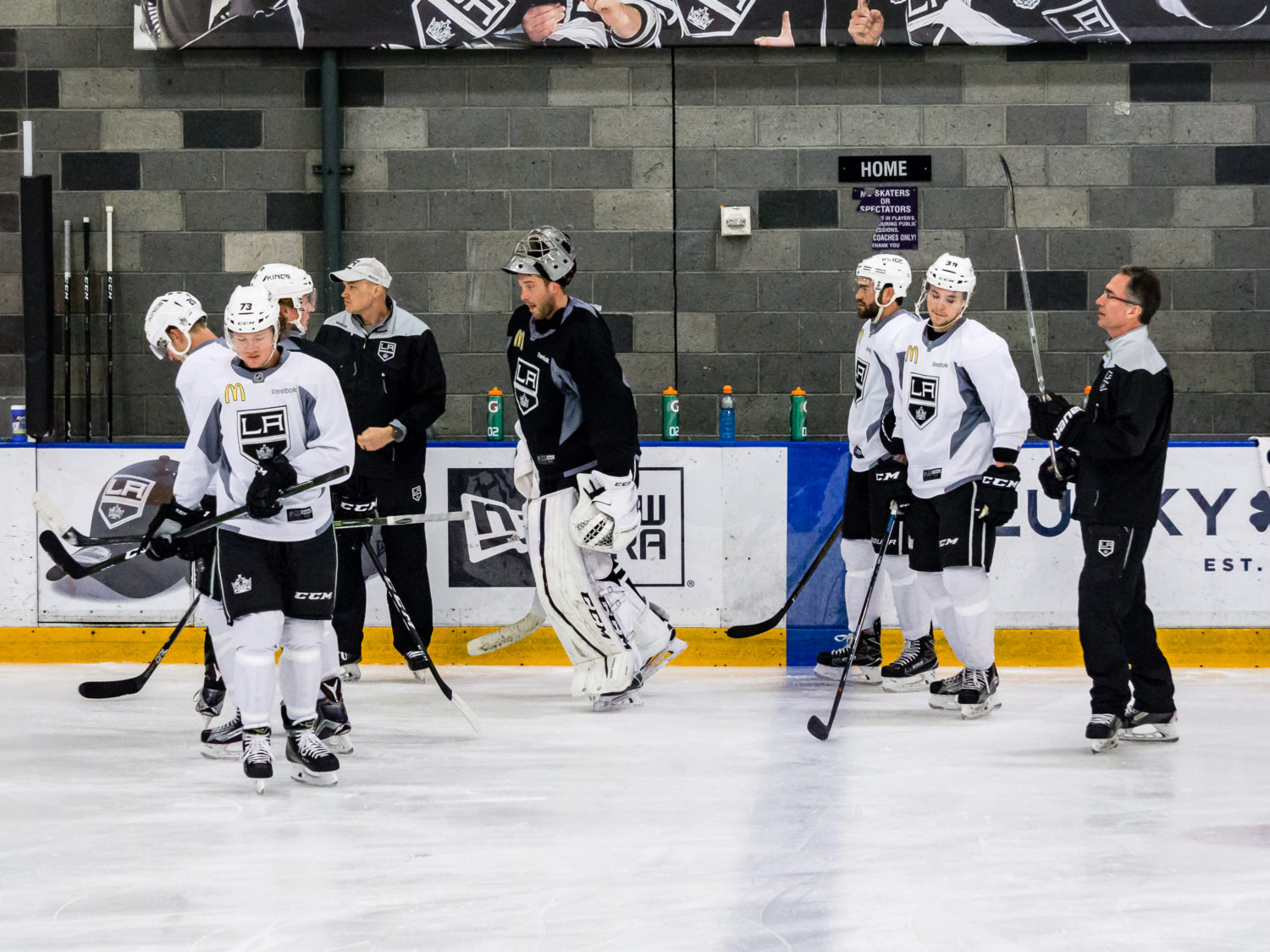 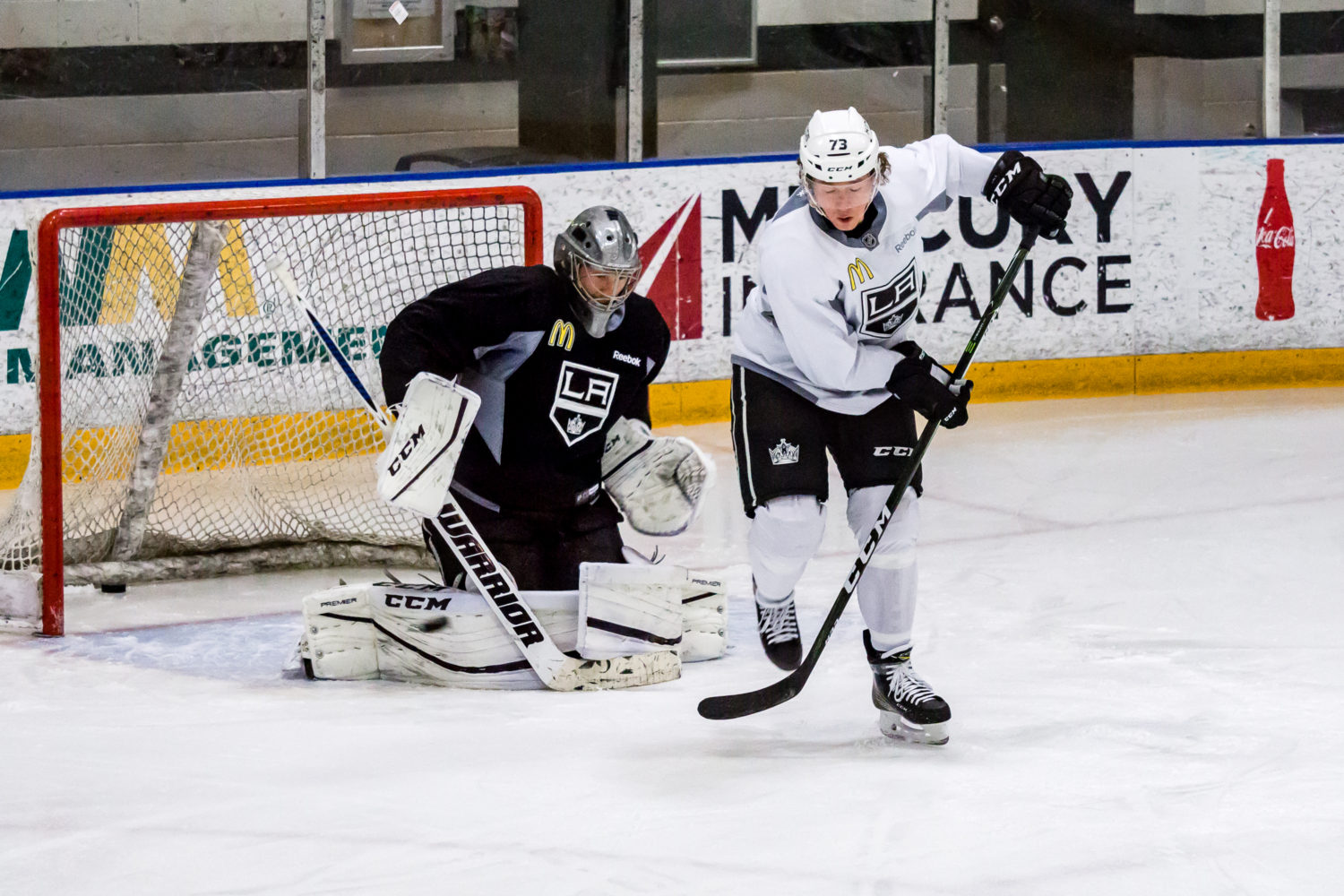 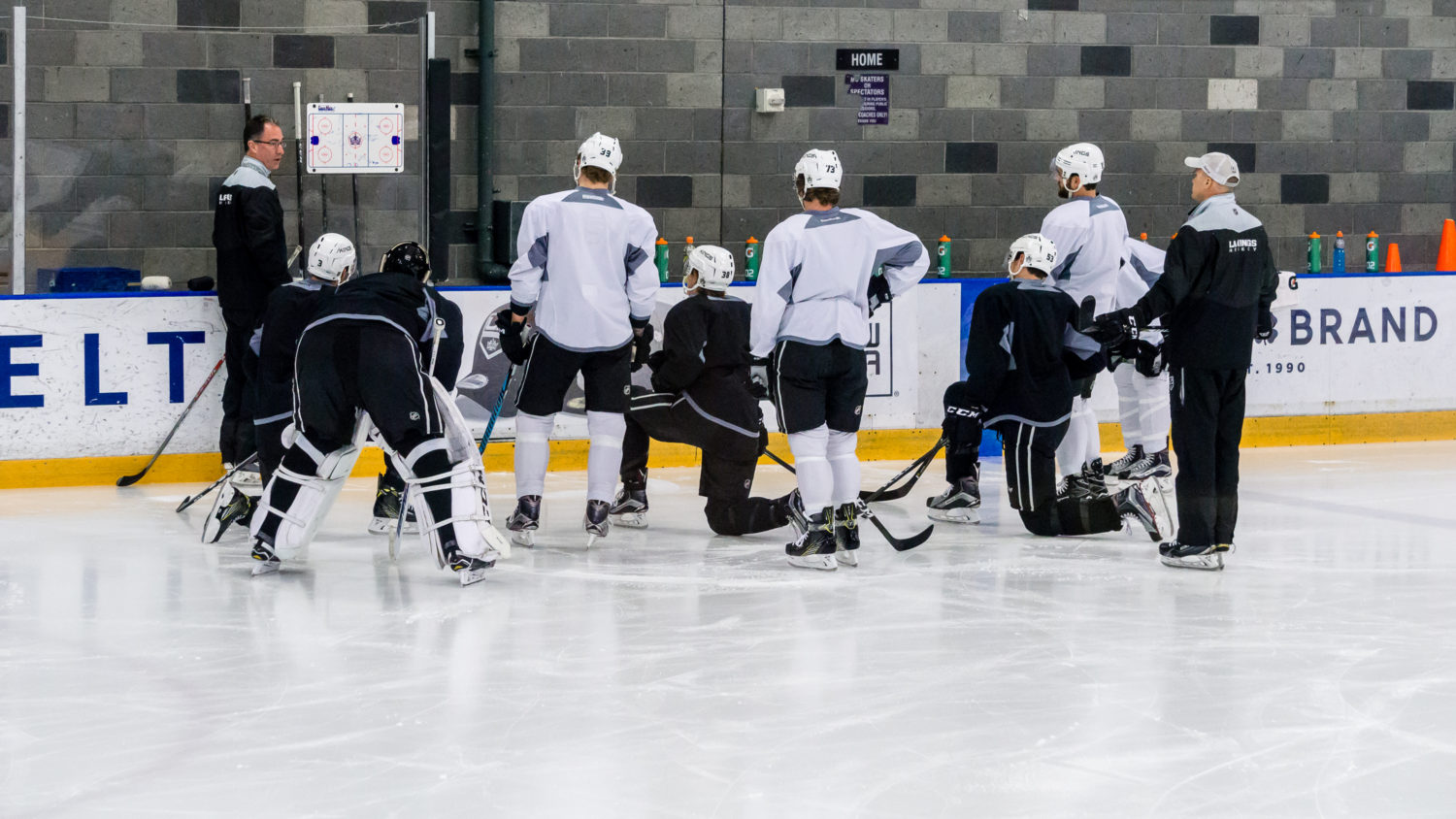 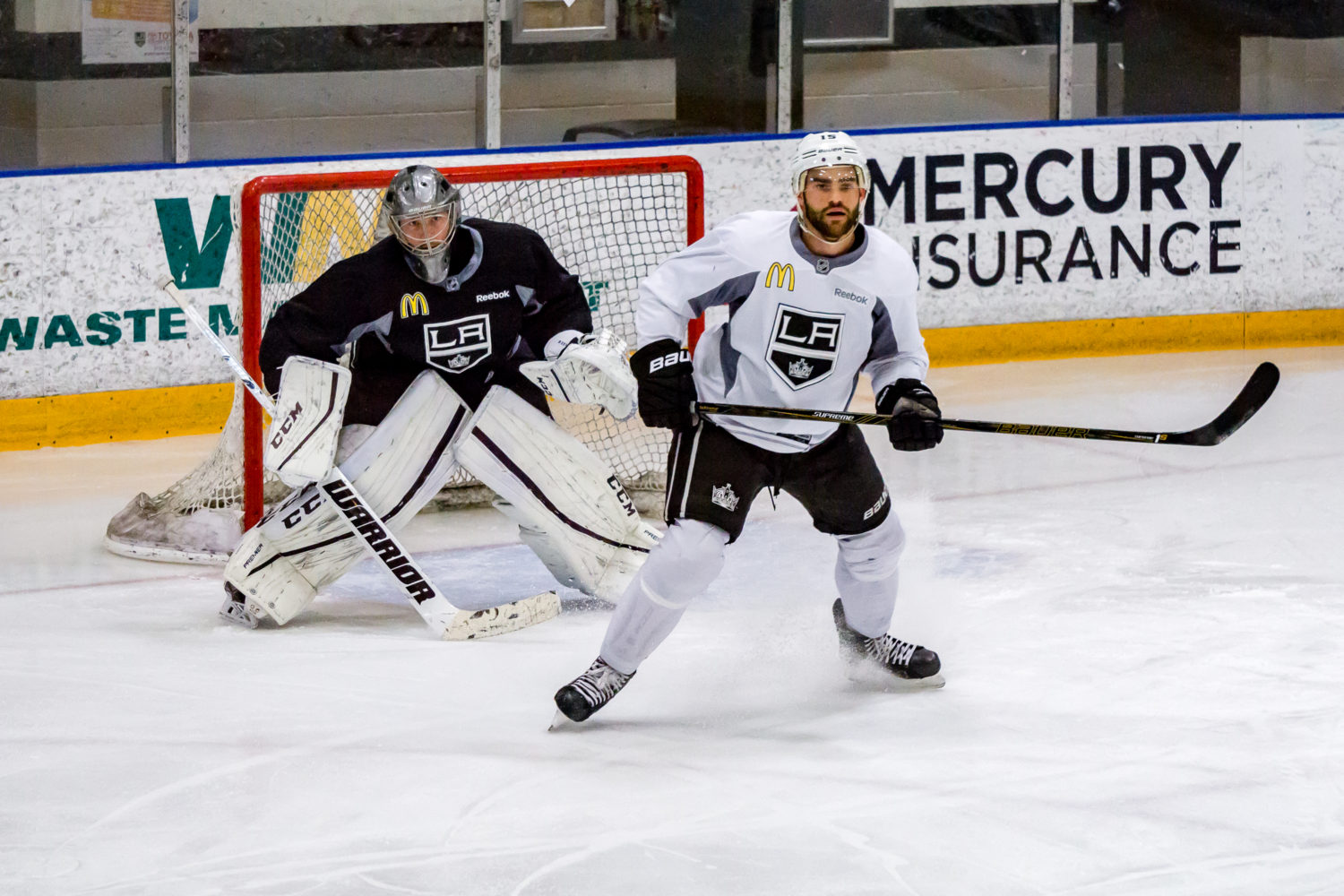