Bishop a valuable asset, but questions remain over offensive output

The Los Angeles Kings acquired a very good goaltender on Sunday. Ben Bishop is a conference champion, a playoff veteran, a qualified number one netminder who has withstood the mental and physical rigors inherent in an 82-game season. He’s going to be handsomely rewarded as an unrestricted free agent this summer and with Jonathan Quick should form as good of a backbone as any in the league. Given the need to avoid throwing Quick into a Peter Budaj-like workload as he recovers from a serious groin injury, the team’s motivation in landing a second number one goaltender is understandable.

Bishop, though, does not score goals or make plays. He does not change the fact that the Kings have been shut out or held to one goal in roughly one out of every three games this season. And unless the Kings find a productive option to play alongside Anze Kopitar, or whether the stabilization in net frees up Kopitar to gain a step in his attack, there are legitimate questions over whether they’ll have enough punch to buy a ticket to the postseason, no matter who starts in net or the dearth of offensive opportunities they’re conceding on any given night. On Sunday night, they were tied for 24th in the league with an average of 2.44 goals per game.

Of course, the trade for Bishop is partially independent of a need for scoring, as Dean Lombardi has outlined. This is a trade that is very fair for the Kings. Bishop didn’t cost an arm and a leg – he’s an upgrade over Peter Budaj, who helped keep stabilize a Los Angeles season that had a clear potential of capsizing before he wilted in February – and helped transform a seventh round draft pick into a fifth. The Kings did not appear to be particularly high at the moment on Erik Cernak, a raw talent with immense physical tools but someone who was not ahead of Kale Clague or any of the more advanced group of young defenders who’ve begun to make a mark on this year’s team.

But will the offense increase now that the team is more comfortable with a goaltending tandem of Quick and Bishop than it was with a duo of Peter Budaj and Jeff Zatkoff? That seems to be part of the mindset that influenced Sunday’s trade.

“It’s all very obvious on the other side that offensively we haven’t been anywhere near where I think we should be capable,” Lombardi said. “The issue then, when we were looking at the best way to improve the team, you guys are all aware, the names out there and everything else, and that’s fine. But once the back end is shored up, I think the focus has to be on the players we have producing up to their capability, and then we can look at additions. It doesn’t matter who we bring in here. You’re not going to get a Panarin or a Kane or Ovechkin or anything else that’s going to completely revamp your offense right now. The number one focus has to be now that your back end is in order and your goaltending is in order, there are some players that we’ll freely admit right to you that they’re capable of producing more.”

As LA Kings Insider has previously noted, the Kings give up very, very little in their own end. Since a steady crescendo of scoring chances against, beginning with a tight-fisted 2011-12 season, the Kings have been giving up fewer Grade-A chances this season than they had in any season since their first Stanley Cup year, as learned through conversations with Lombardi and Bill Ranford.

“We’ve seen this before that when sometimes an injury goes down, it forces you to do some other things better than maybe you would have otherwise, and I talk about the chances, too,” Lombardi said. “It’s been one of the things that we’ve had to revamp here since we won the Cup. The loss of guys like Willie Mitchell, Rob Scuderi – tremendous fit guys – and then obviously Voynov. So this has had to be rebuilt. The way Forbort has come on, getting Gravel in the lineup, and now we just brought up LaDue. To be able to keep those chances and still maintain our identity with that young back end, and now with your number one goalie, and keep maintaining their confidence, is something that shows we’re in the right direction.”

Keep in mind that last year, though Brayden McNabb, Gravel and Forbort had all been options at various parts of the season, the team still chose to bring in veteran defenders in Luke Schenn and Scuderi. On Sunday, the team won an important divisional game against another highly physical team by using a blue line populated by the 26-year-old and two 24-year-olds listed above. 20-year-old forward Adrian Kempe has shown good hands and speed and has been an asset through his first six games played.

“I think we’ve trended towards, ‘OK, we’ve got a couple kids from the minors here that we’ve got to start breaking in anyway,” Lombardi said. “And like I said, these players know what they’re capable of up front, and to their credit, maybe, in some cases, because we’ve had to tighten up defensively, but they can do both.”

While the Kings have buckled down in their responsible systems play and continue to spend so little time in their own zone, this year has not been kind to several of their reliable offensive performers. 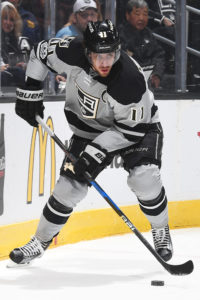 As great as Anze Kopitar is in checking and in heady all-zones play, and as much as he may have sacrificed for the solidification of the checking play necessary to compete in a season in which Jonathan Quick was injured and the team rode a goaltender who started the season as a third-string option, he has six goals in 55 games. After scoring 31 times last season, Tyler Toffoli has 12 goals in 42 games this season. Marian Gaborik missed training camp because of a broken bone in his foot but has accounted for six goals in 38 games and was a healthy scratch on Saturday. He has 392 career goals.

Discussions with the front office over the last six weeks highlighted the desire to acquire a forward capable of playing alongside Kopitar who wouldn’t command the type of a price tag that stung the team two years ago when it parted with a first round draft pick and prospect Roland McKeown for 16 games out of defenseman Andrej Sekera. That trade continues to influence the team’s decision-making process and the avoidance of giving up major assets for a rental player. (To reiterate, the club did not consider Cernak, a former second round draft pick, to be among its most prized prospects.)

But are there players available who come with a minimal price tag and are capable of playing on a top line? Such criteria seems incongruous. It might not matter a great deal, because the possibility of making an additional move was downplayed, and perhaps Los Angeles will continue to bank on its dominant possession play and familiar names in lieu of any additional trades.

“We can still be what we are in our own end and getting out of our own end and getting in the other teams’ zone, but it’s time to bear down,” Lombardi said. “Everybody [says], ‘Oh, why don’t you get offense?’ To be honest with you things can change, but I just don’t see the answer, and it has to come from within, and I think a lot of those players are certainly capable of it coming from within.”

Bearing down is often post-game vernacular used by players trying to justify the difficult-to-explain reason why pucks haven’t been finding the back of the net. With 21 games to play, the Kings will need to summon that ability, which is clearly inherent in certain players who are having down years offensively. It boils down to a big question mark: Will the reinforcements in net free up this offense and release the burden on some offensive players? If it does, there could be an added gear remaining in this Kings team. If that doesn’t materialize, there could be additional questions, in the absence of additional moves, as to whether Los Angeles did enough to strengthen its current scoring deficiency. 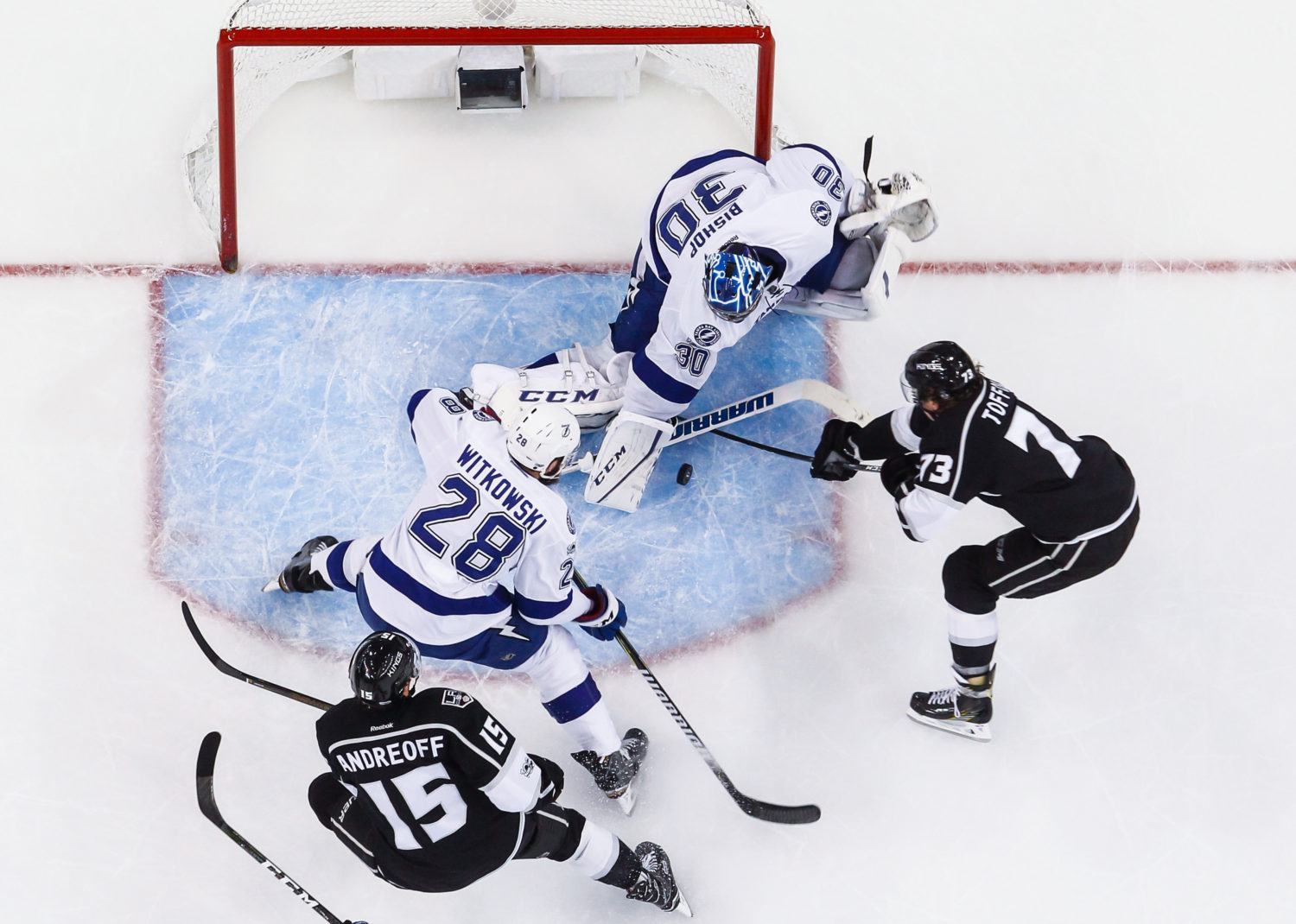