Amidst heightened competition on the blue line, Gravel looks to add some snarl - LA Kings Insider

Amidst heightened competition on the blue line, Gravel looks to add some snarl

The Los Angeles Kings don’t appear to have any real grave issues with their third defensive pair, which since Matt Greene was felled by an injury and Tom Gilbert was placed on waivers, has been filled by a consortium of lefties in Brayden McNabb and Kevin Gravel, and righty Paul LaDue. (Their second defensive pair, which has often featured Jake Muzzin and Alec Martinez – both minus-11 since the turn of the calendar year – has been a different story.)

But Gravel, LaDue and Derek Forbort, born in 1992, and McNabb, born in 1991, represent the younger and less experienced faction of Los Angeles defenders following Greene’s injury, Robyn Regehr’s retirement and Willie Mitchell’s departure and eventual retirement. The elder statesmen of active defensemen, whose lockers are aligned across the length of dressing rooms at Toyota Sports Center and Staples Center, is Martinez, who turns 30 in July.

Darryl Sutter said earlier today that he chooses to “go with the best six, for the most part,” but also acknowledged that it’s not in the team’s best interest to overload the blue line with inexperienced players. Entering tonight’s game against Florida (7:00 p.m. / FOX Sports West / FOX Sports GO / KABC 790 / I Heart Radio), Forbort had logged 70 career games, which was more than Gravel (43) and LaDue (3). LaDue is also right-handed, which gives him a boost when the only other active right-handed shooter on the roster is Drew Doughty. (Gravel can play both the right and left side but has only scant experience playing his off-side at the NHL level.)

With Forbort having admirably widened his load to a mostly comfortable 19:44 per game and often seeing top competition alongside Drew Doughty, there now appears to be a rotation between McNabb, who averages just under 16 minutes per game and has appeared in 19 of 21 games since returning from a broken collarbone, LaDue, who has averaged 14:39 per game through his first three games, and Gravel, who averages 13:47 and hasn’t played since LaDue was recalled from Ontario.

The Gravel eye-test grades passably. He skates well for a 6-foot-4 defenseman, he’s capable of moving the puck and making plays with a good rhythm, has a sneakily heavy shot and since debuting in Brooklyn in the 2015-16 season has for the most part exuded poise and confidence in his reads, reactions and decisions.

“He’s a little more mature in his game,” Darryl Sutter said, before noting the area the 24-year-old Upper Peninsula native is striving to address.

“He has to play a firmer game.”

In recent years Forbort was tasked with a similar need to raise his jam and bite, and appears to have done so, if one looks at his shifts and the type of assignments he receives. It’s also something that Gravel has experienced when stepping up a rung in professional hockey.

“I think as you move up levels you kind of see it,” he said. “Like, with anything, you move up levels and players continue to get better and better and you need to hone in your skills that much more, and especially at this level, guys can really make you pay for your mistakes, and especially below the goal line. A guy spins off you and goes to the net, usually something dangerous comes out of it if it doesn’t end up in the back of your net, so those are important plays down there to get the play stopped and get the puck moving the other way.”

There weren’t any lineup hints revealed at this morning’s optional skate, and Sutter said that all active players will take the ice for warm-ups. Given the added balance from LaDue, who plays on the right side and has graded well over his first three games, the versatile Gravel may still be the odd defender out.

“Obviously we have seven D and all seven our capable of playing every night, and I think we’ve got the faith in all seven of us that whoever gets their number called is going to jump in and do the job,” Gravel said. “So right now, Pauly’s playing well so, Paul and Brayden both are playing well, so I just need to treat practices like games. Just continue to get work in, stay positive. Coaches do a good job of keeping you ready and all that, so just continue to work hard.”

Kevin Gravel, on camaraderie amidst a younger defensive group:
Yeah, for sure. Obviously you know we all kind of stick together. Forbs and Pauly and myself played together last year, Pauly joined us late and Forbs and I, this is our third year now, so yeah. These guys are your best friends so like you said, great camaraderie. Everyone’s got full confidence in everyone so it’s a healthy competition, which is good.

Gravel, on what he thinks it’ll take to get up to the 18-minute range:
You know what? I think I can become a little bit harder to play against, whether it’s down low or anywhere. With my stick, my body, anything. There’s a lot of very skilled forwards out there on the other teams and they’re good down low and I think something I can improve on is my below the goal line play. Whether it be finishing a guy off or using my stick to kind of end the play and get it up to our forwards. You know, you’ve just got to continue to work on that obviously. Add strength and all that, so it’s something that I’ve been trying to get better at. 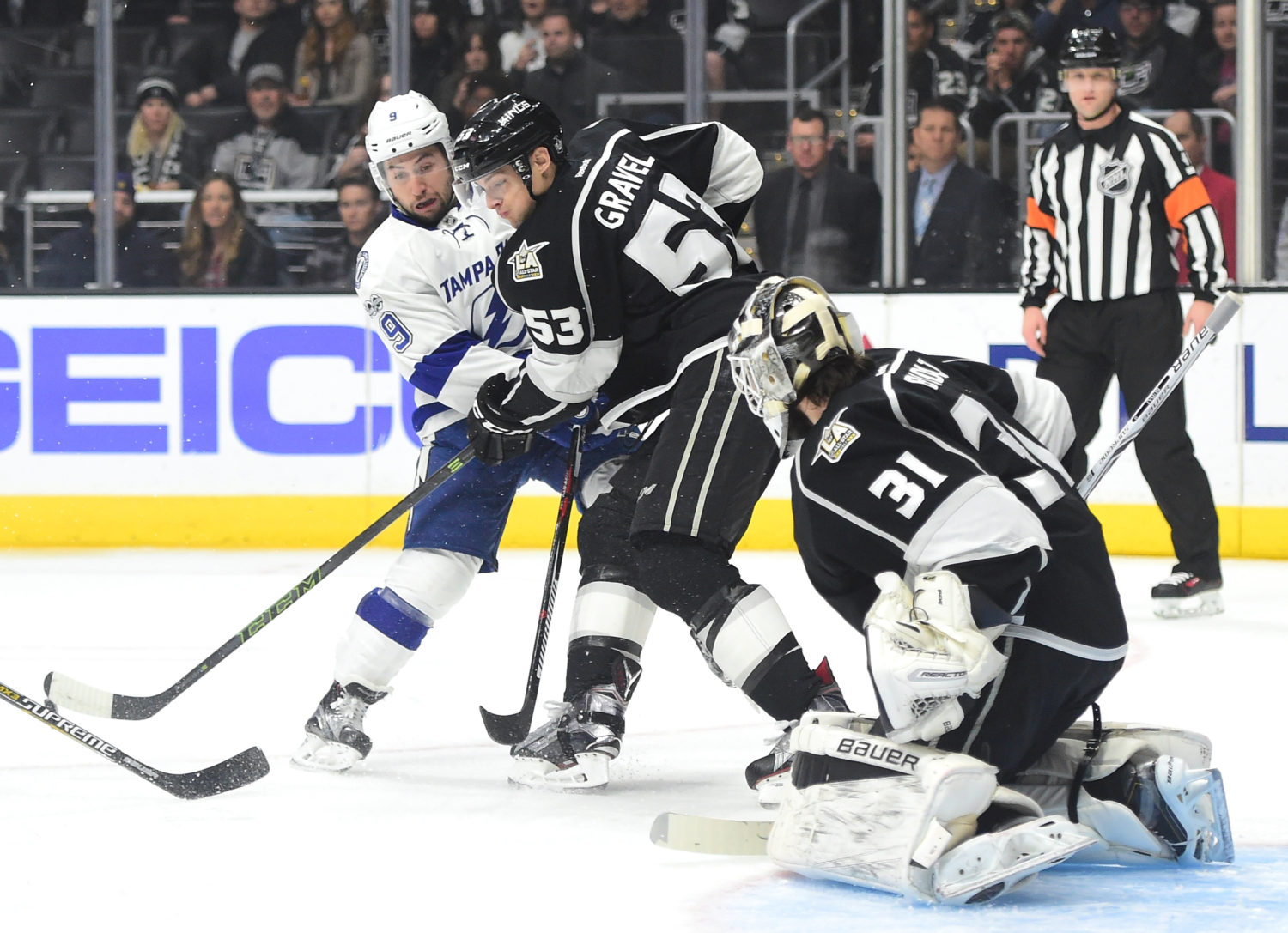