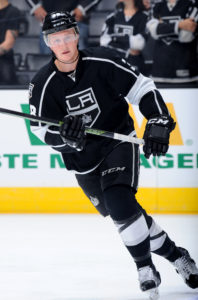 The Los Angeles Kings are on the verge of recalling defenseman Paul LaDue from AHL-Ontario, according to multiple sources. LaDue, a 24-year-old who won a national championship with North Dakota last season, has six goals, 18 points, an even rating and 76 shots on goal in 36 games with AHL-Ontario. The right-handed defenseman was selected in the sixth round in 2012.

The impending LaDue recall is one of several roster moves the team is likely to make over the course of roughly one week. On Monday, the team placed Matt Greene, whose back and groin issues have resurfaced, according to Darryl Sutter, on injured reserve. Tyler Toffoli (lower-body) is also on the verge of a return to the active roster but is unlikely to play against Colorado tonight. To accommodate both LaDue and Toffoli, the team placed defenseman Tom Gilbert on waivers Wednesday morning, which could potentially free up a roster spot should the veteran defenseman be claimed or assigned to AHL-Ontario.

The team could announce the transaction as early as this afternoon. As a player who will be coming off his first professional season, LaDue is exempt from the expansion draft and would not need to be protected.

LaDue, who signed a one-year entry-level contract in April, 2016, turned heads with a highly pronounced preseason with the parent club this past fall. In returning to Ontario, the rookie has played most of the season as part of a defensive pairing with hard-nosed rearguard Kurtis MacDermid and has been used in all situations by head coach Mike Stothers.

“He’s had some ups and downs, which is to be expected for a first-year guy. But, man, he makes some plays,” Stothers told Reign Insider Lindsay Czarnecki in January. “He escapes coverage and forecheckers with his feet. He makes good outlet passes. He’s mobile and he’s getting the puck through, which is important. He’s changing his point of release, he’s not just blasting it into the shinpads of the opposing players. There’s a lot of composure in that young man. He’s good and he’s only going to get better. He’s one of the guys when I think back to last year, I wish we would have got him sooner. He came out of school and it was a while before he arrived with us. Who knows, who knows. [Brett] Sutter’s healthy, [Jonny] Brodzinski’s healthy and we get LaDue a little earlier, maybe it’s a better challenge against Lake Erie. So, you don’t like to look back, but that kid’s got a hell of a career ahead of him.”

LaDue’s 18 points with the Reign rank second amongst team defensemen.

Gilbert, 34, has one goal, five points, a minus-five rating and 12 shots on goal in 18 games with Los Angeles.