In Simmonds’ “full circle” return as an All-Star, a proud Futa recollects

There are a lot of people extremely proud of Wayne Simmonds being named to his first career All-Star Game. It spans the entire continent, from his hometown of Scarborough, to Philadelphia, where he has emerged as a beloved fan favorite, and back in Los Angeles, where he began his career before being traded to the Flyers as part of a package that brought Mike Richards to Staples Center.

“It’s unbelievable,” Simmonds said. “I started my career here, so it’s kind of coming full circle. Played three seasons in Los Angeles, thoroughly enjoyed it, and I got the chance to be traded to Philadelphia, a first class organization, and I’m having a great time there.” 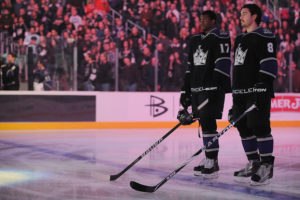 Among those to be the very first to offer support to Simmonds has been Mike Futa, the Kings’ Vice President of Hockey Operations and Director of Player Personnel. Futa received a commitment from a then-teenage Simmonds to play for the OHL’s Owen Sound Attack, where he served as General Manager, and then joined the Los Angeles organization as a Director of Amateur Scouting in early June, 2007. Later that month, the club took Simmonds with a second round draft pick, a selection that at the time was seen as a reach but is now regarded as a representation of excellent scouting and excellent value. In 50 games this season, the 28-year-old has 21 goals and 38 points.

“I can’t really put it into words,” Futa said of Simmonds returning to Los Angeles for the All-Star Game. “Every ounce that he’s got is professional, he’s earned, and to have a little part and kind of open the door for him as a young guy through junior and obviously the pride in drafting him here as a Los Angeles King, for him to be able to come back in his first All-Star appearance where it kind of started him off as a pro is really special.”

The two still keep in contact fairly regularly despite the change of sweaters five and a half years ago, with Simmonds saying “it’s more of a friendship than it is a business relationship, and every time we talk it’s usually about other things besides hockey.”

At the time of the trade, there could have been natural disappointment on both of their behalf, given the relationship the two had built up. But Futa understood that the trade was to acquire a player with the leadership capacity of Mike Richards, regarded as one of the hardest working and emotional leaders in the game, and while disappointment could come normally to any young player traded away by the organization that selected him, Futa encouraged Simmonds to step back and think about the person he had been part of a return for.

“I don’t think I took offense, no,” Simmonds said of the trade. “I think I was kind of shocked because you know when you get drafted by a team, you’re cultivated by a team, you kind of think you’re going to stay there for life but that’s not the business of hockey and I now realize that nine years in but at the same time when you get traded it’s kind of a shock but I’ve got good people around me — a lot of good family, a lot of good friends and I quickly realized that Philadelphia was a good place for me.”

Earlier in his career, when he had committed to Owen Sound, it wasn’t necessarily the cerebral approach as the physical improvements that had to be adjusted. That development is something that continues to resonate with Futa.

“Well, for one thing he was able to put on some weight which was critical because he always so wiry strong but to get himself, for a guy that’s whatever, 185 pounds now, he’s probably got the strength of a guy who’s about 225 pounds and you can see it when you add his compete to that. It was something that he had to work on,” Futa said. “He was really probably one of the best examples that we could ever have for how our development kind of comes full circle with regards to one of his biggest knocks was his ability to protect the puck, one was strength related and another was he just used to carry it out in front of him and I know our development team, Nelson Emerson and the group did an incredible job working with him on protecting the puck and now I think he’s one of the premiere puck protectors in the National Hockey League. You can just see how he gets over and protects it and I guess the next level of it would be come out of it and make a play, and he learns how to make plays. He’s a throwback. I mean, he’ll fight for a teammate, he does those things for the right reason. He’s now got the confidence to score, to make people around him better and he’s been able to channel what was kind of a rebellious competitiveness in to being just a true professional just on and off the ice.”

“For me, he kind of defined my career coming here and a lot of people here not really knowing a lot about him and me being able to present him and Dean being able to show me that if you believe in a kid that much you better have the balls to step up and take him where you got him on your list and not try and hide him. And he’s made me proud and more importantly he made his family and himself proud ever since then.” 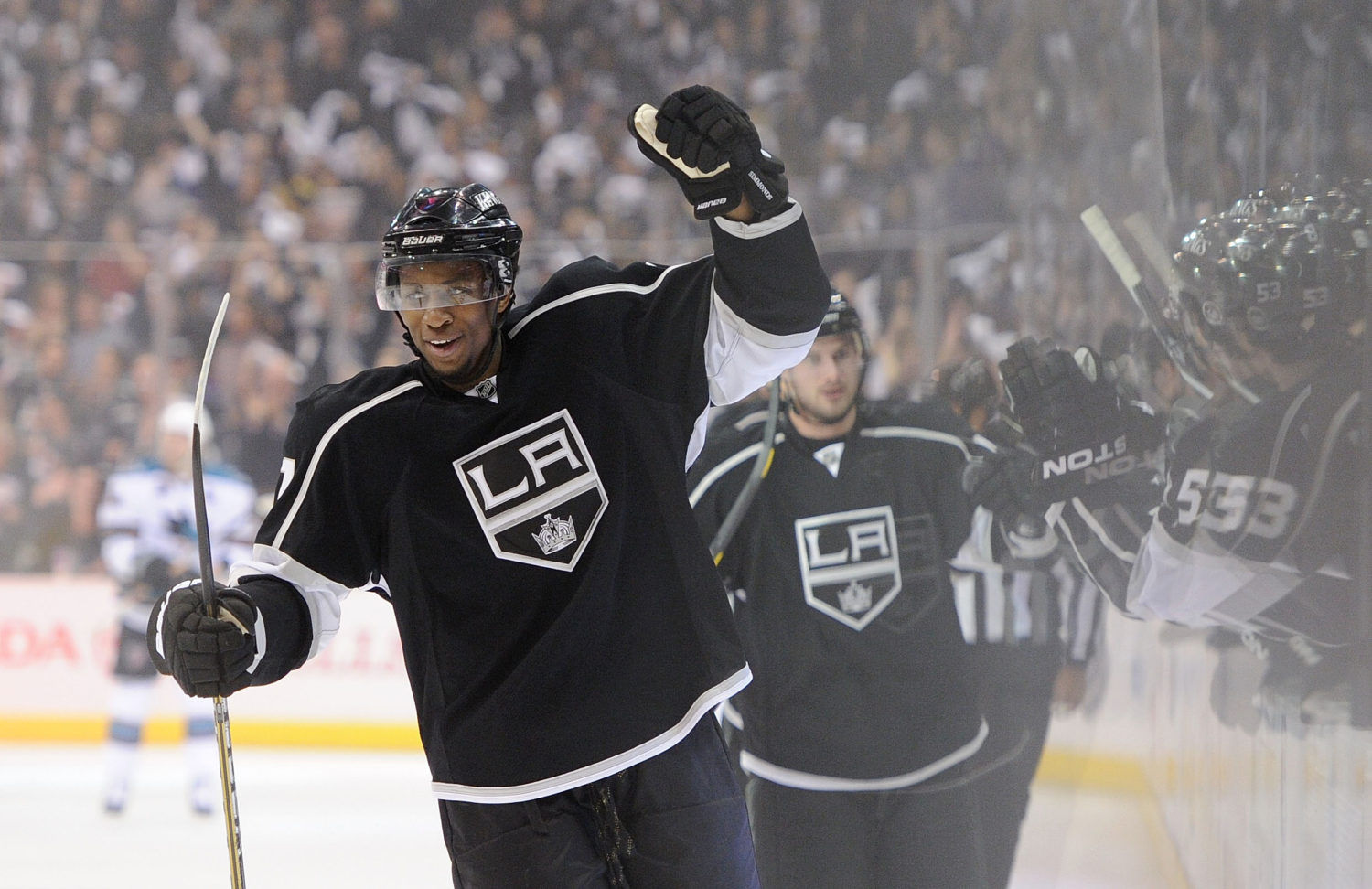 Wayne Simmonds, on the impact Michael Futa has had on his career:
He’s been like one of those guys who’s always just like, he’s always encouraging. He’s always been there for me no matter what, good or bad. He’s just been one of those guys if I’ve done bad he’s always telling me I’m doing right so he just kept my confidence high. He’s the reason why, he’s probably one of the main reasons why I’m in the NHL right now. I got a chance to play for him in Owen Sound when he was the general manager and he quickly found another job with Los Angeles and I was lucky enough that he thought so highly of me for him to draft me.

Simmonds, on whether coming back to Los Angeles for the All-star game gives him pride:
Yeah, good pride. Good pride. I got an opportunity to play here as a 20-year-old and I think I was a completely different person. Probably did a lot of stupid things. I think it might be a little bit of validation to know that I’ve gone through all the paces and I’ve done my work and I’m here today and that’s a testament.

Simmonds, on whether part of his success came from maturity:
Yeah. You go through the years and you gain different things. When I was in Los Angeles I had the opportunity to play with Michal Handzus, he had a huge say during my development. I played with him for three years straight, he was probably the only line mate that I had every single day coming to the rink and he was such a professional, and then getting a chance to study like Ryan Smith, guys like that, Anze Kopitar, Dustin Brown. I think it just gave me the opportunity to be the player I am. I appreciate every single thing that I ever got from Los Angeles but I’m definitely happy to be in Philadelphia.

Simmonds, on what Kings fans might not know about Drew Doughty:
I think Doughts kind of leaves it all out on the table. I think they kind of know everything about him. He’s a funny guy, he makes me laugh so that’s probably why he’s one of my best friends. [Reporter: Have you seen him since you’ve been out here?] Yeah, yeah. We were together — I came in yesterday and we hung out. Me and my fiancée, him and his girlfriend, we hung out. We’re pretty tight. We see each other back home all the time, so it’s a good time.

Simmonds, on the younger players in the league:
Yeah, those guys are pretty special. I’m getting a chance to play against Connor and Auston, those guys. Especially I think obviously freshest in my memories is probably Auston — when he has the puck it’s unbelievable, it’s like he has the puck on a string. To play against guys like that, it’s pretty cool. This is my ninth year in the league and this is my first opportunity so I’m just going to try to take everything and roll with it.

Simmonds, on what’s impressed him most about the All-Star events so far:
Honestly, I think just the calmness of the guys that are actually here, you know, everyone acts like they’ve been here before so it’s pretty eye-opening but at the same time it’s an honor to be here.

Simmonds, on the league naming the 100 greatest players of all time last night:
Yeah. I think the first person I saw yesterday when I got out of the cab was Ray Bourque, so that was pretty special. I was walking downstairs and talking to Larry Robinson and it was just like ‘Oh my god that’s Larry Robinson.’ … It’s an honor just to be amongst so many great players and it’s just a thrill. I can’t take the smile off my face.

Simmonds, on the transition to Philadelphia:
I think it took a little bit but Philadelphia’s such a great organization and as soon as I got there I felt welcome with open arms. I think the town of Philadelphia, they’re just blue-collar, hardworking people and that’s kind of what I base my game around, so I was accepted pretty quickly and I definitely appreciate the people of Philly.

Simmonds, on potentially playing with Sidney Crosby and Alexander Ovechkin during 3-on-3 play:
Yeah, pretty special. I think if I get out with them I’ll probably just give them the puck and go to the net, probably try and tip things but I don’t think you can do that in 3-on-3 but you know. We’ve got, the Metro division has a lot of great players in it and I’m just honored to be one of them. 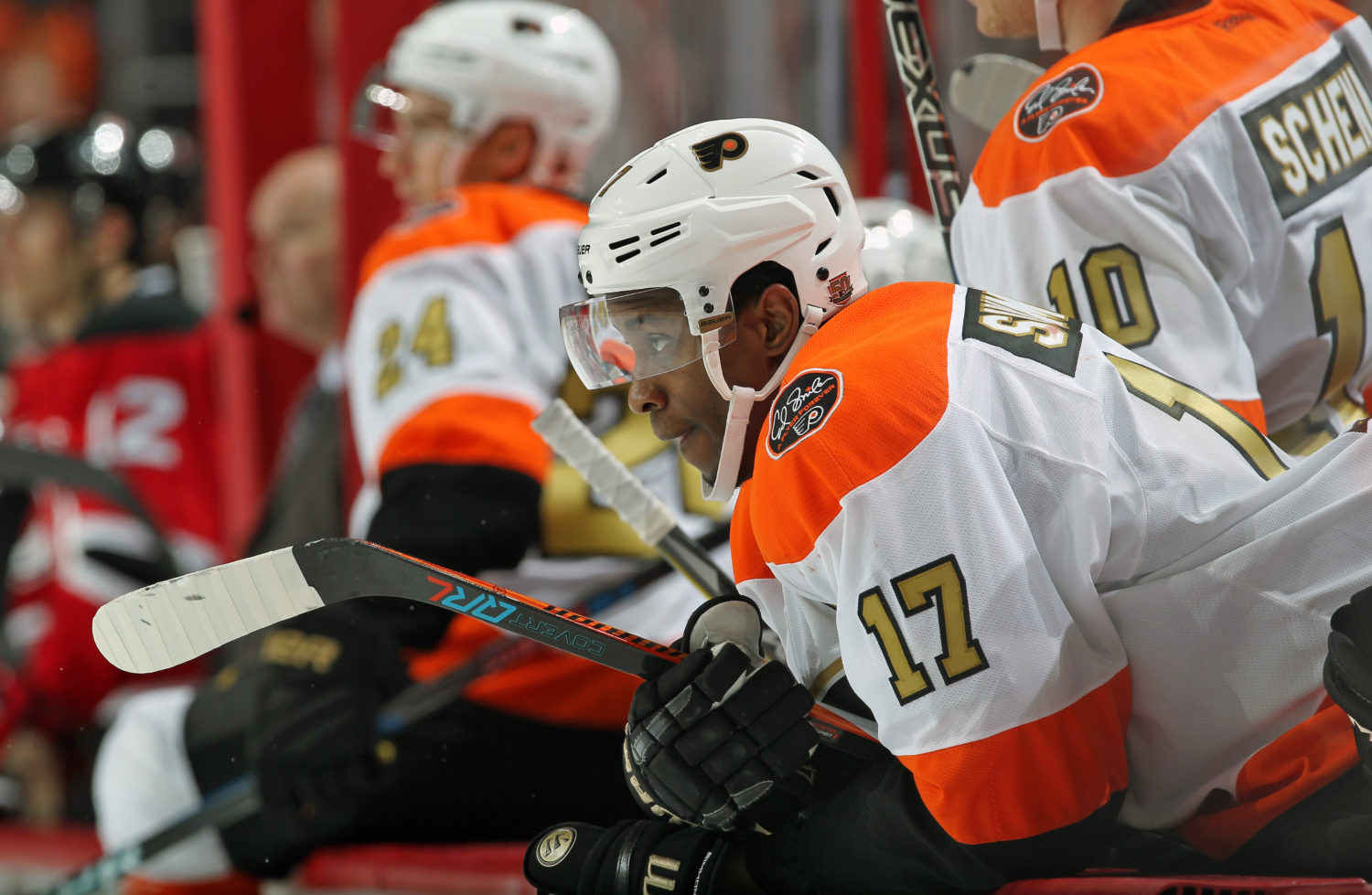