In a surreal scene, members of the media were allowed onto the Microsoft Theater stage at the conclusion of the NHL 100 event to speak with the honorees. The only thing in hockey coverage that is remotely similar is the scene on the ice after a team has won the Stanley Cup and there’s a reporting free-for-all amongst those looking to speak with players, coaches and executives.

This was a tighter space than a 200 by 85 foot glass-enclosed pen, which meant that sometimes you had to step aside to allow Pavel Datsyuk to pass as you continued your conversations with some of the other greatest players to have ever played the sport.

“I mean, it’s pretty amazing even to be in the room and to look at the ex-Canadiens, and then I bumped into Bobby Orr at one point, and I’m like, ‘Oh sorry, sir.’ And it was like, oh, it was Bobby Orr,” Kings President, Business Operations Luc Robitaille said. “It was pretty amazing to be amongst this group. Yvan Cournoyer, he was next to me. Jacques Lemaire. It was truly an incredible experience to be in that room.”

1980’s and 90’s era Kings Robitaille, Larry Robinson and Marcel Dionne spoke with LA Kings Insider and Ontario Reign Insider from the stage at the Microsoft Theater on Friday to share their experience of being named to the prestigious NHL 100 list. 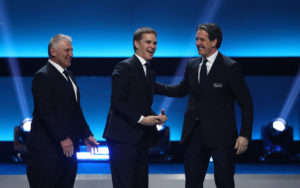 Luc Robitaille, on Los Angeles hosting a large scale NHL event:
Well, that’s how far we’ve come, that the league would trust that Los Angeles can host all these great players in one room. I think it’s amazing. You’ve got to give credit to our guys who’ve won and our fans who’ve supported us all these years, and the fact that that’s happen, that’s why we’re able to host that.

Marcel Dionne, on the hockey community that descended upon Downtown Los Angeles:
It is very special, but never forget this is Hollywood! Look at this atmosphere! Gary Bettman called me and said you’ve been selected as [part of] the top hundred guys, I said, ‘Well, which number am I?’ He said, ‘Well, we don’t give numbers.’ I said ‘Oh, I’m very disappointed.’ He said, ‘Why?’ ‘I would love to be number 99! They would never forget about me.’ But you know what? They’ve done a good job. It’s a great show. You’ve got to remember, a lot of guys are not around here tonight, they were in Toronto. Guys like Gordie Howe, Jean Beliveau, the Rocket – those were my guys, and they’re the guys that started this. It’s very nice to see Frank Mahovlich, Bobby Hull. When I see these guys, I want to see Patrick Kane and Jonathan Toews and Sidney Crosby looking at them. … It’s a nice place to be. This is the All-Star Game. It’s the second time for myself – I was with Dave Taylor, Charlie Simmer, the original first All-Star Game [in Los Angeles]. It’s a little bit different. It’s a big show, entertainment. She never came to the All-Star Game, so now you bring your families, you bring your kids, they’re in the dressing room. It is what it is, right? A different game. Four-billion dollar industry business, right?

Dionne, on having the greatest 100 players in one room:
I’m a little bit different, right? I’m very fortunate to be here, because there are a lot of guys that are left out there that could be just in the same package deal. I think there area over 70,00 players that played the game. Never get too cocky. I know who the guys are. I know Wayne Gretzky. I know Mario. I played against them. I played against Bobby Orr, so I’m pretty good. I played against Gordie, won a couple games. Bobby Hull I played, and I played with some of them. I didn’t play with the guys with the Rocket. It’s just like how you talk about Babe Ruth. But I caught these guys at the right time, and you know what? They were great hockey players. A lot of us, you think you’re good until you see how good they are. … I remember Guy Lafleur the age of nine, ten years old to PeeWee, international tournament, standing ovation for ten thousand people because he was doing things and even myself and Gilbert Perreault that our teammates couldn’t do in those days. So we go way back. I have my first letter from the Montreal Canadiens at the age of 12. Are you kidding me? I left home when I was 15. Wanted to say to my parents keep the good work, you’re doing a good job. I was the one that was playing. 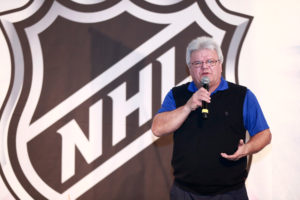 Dionne, on whether he wonders what would’ve happened if he was chosen first overall in 1971 instead of Guy Lafleur:
Absolutely not. I tell you, I don’t need to wonder. I look at the list today. This is between all of us. I feel like Trump a little bit. You’re the media, right? This is what it is. I look at the list and I would say almost 90 percent of the guys, a lot of guys stayed in the game. They did one thing, they stayed in the game, they coached, [were] an assistant coach, did promotion. I never did. I left the game, never looked back. Been very successful with what I did but what the game’s given me, it’s to understand about the fans. And, no fans, no game. So I went back, made my fortune with the fans. Talked to them, make them feel about it, they want to know what’s going on. What about all this money today? If you were playing today how much we would make. You can’t be everywhere. I said, it gave me an opportunity to go back in our communities and go back and help people that have nothing. So they look up to you and that’s why I like to look at these young guys today that it’s missing, this people that idolize you, and should never forget that. When somebody looks at you … all you have to do is acknowledge, acknowledge. Because you say, ‘yeah, I’m the guy.’ And if you do this, you know what, you hear these stories and it’s wonderful. Wayne Gretzky is very good at that. Very, very good. These kids are going home and saying, ‘oh my god, I met this guy,’ then it’s good things, right? I don’t want to hear about bad things with athletes but there’s a lot of them today that their structure with money, and their agent don’t explain [to] them. The managers of the teams don’t explain [to] them in the teams. So they think yeah, it was always like that. No, it was not like that. It wasn’t like that when we were practicing in Culver City. You know that, right? So you just say ‘hey I didn’t forget how I started.’ Never forget where you come from. 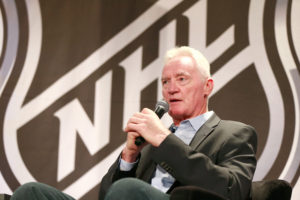 Larry Robinson, on returning to Los Angeles for the event:
I’m fortunate in that I come back here quite often because our daughter lives here, we’ve got family here, so we come back here quite often. It has a special feeling for me because I was involved as a coach when we were designing Staples Center and the practice facility and everything else. So, they’ve come a long way. And the Anschutz [family], I have a special place in my heart for them because they’re just wonderful people and if ever I had to lose a Stanley Cup Final I was kind of glad it was for them because it was their first and everything else. I have some great feelings. A lot of my future now was because of what happened here in Los Angeles.

Robinson, on NHL 100:
Well, this is great. This is really, truly special. It’s something that you’re not really going to think that much of at the moment because they’re so much going on – be here, be here, be here, and all this other stuff. You just start looking around when you’re being introduced and you look at all the different people and who’s involved, my god, it’s pretty humbling.

Robinson, on what he will do with the NHL 100 jacket:
Probably give it to somebody that it will fit. 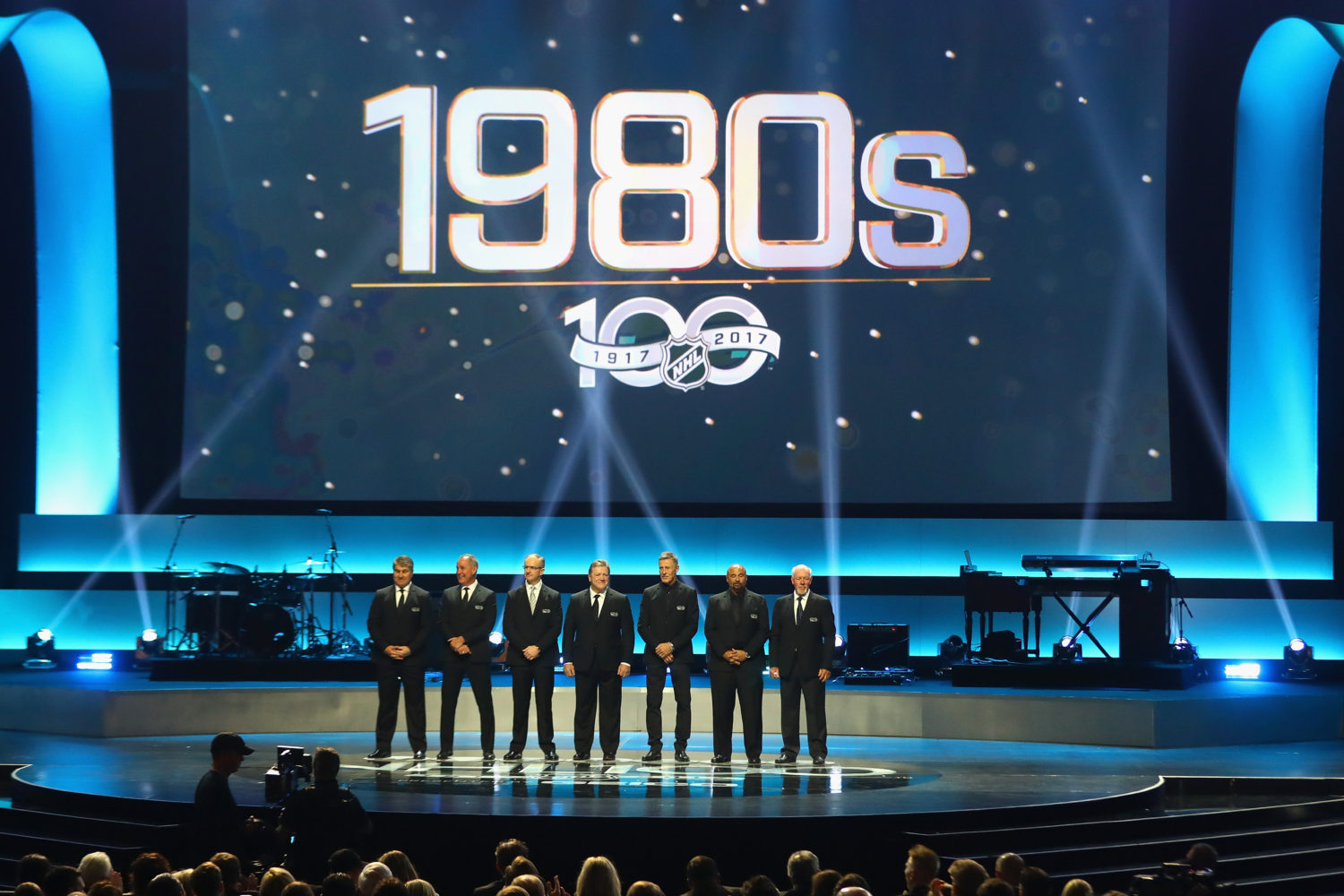