Good morning! It was a busy weekend for the Reign with Saturday-Sunday home games so the Reign Rewind was bumped to Tuesday. Today we’ll have some updates on the progress of Adrian Kempe, Jonny Brodzinski and Paul LaDue as well as an interview with veteran T.J. Hensick, who recorded point No. 500 in his AHL career on Saturday.

Head coach Mike Stothers hasn’t much mentioned the team’s quick exit in the Western Conference finals a season ago when they ran into buzz-saw and eventual champ Lake Erie and lost via sweep. So, it was surprising that he brought it up in a roundabout way following Saturday’s win when being asked about what rookie blue liner Paul LaDue has meant to the team.

“He’s had some ups and downs, which is to be expected for a first-year guy. But, man, he makes some plays. He escapes coverage and forecheckers with his feet. He makes good outlet passes. He’s mobile and he’s getting the puck through, which is important. He’s changing his point of release, he’s not just blasting it into the shinpads of the opposing players. There’s a lot of composure in that young man. He’s good and he’s only going to get better. He’s one of the guys when I think back to last year, I wish we would have got him sooner. He came out of school and it was a while before he arrived with us. Who knows, who knows. [Brett] Sutter’s healthy, [Jonny] Brodzinski’s healthy and we get LaDue a little earlier, maybe it’s a better challenge against Lake Erie. So, you don’t like to look back, but that kid’s got a hell of a career ahead of him.”

LaDue joined the team late, following his run to an NCAA title with the University of North Dakota. Sutter gave it a go for two games in that Lake Erie series and it was later learned that he was attempting to play through a fractured pelvis and Brodzinski (thumb/wrist) did not play a single minute after suffering his injury in the first round against San Jose.

In an entirely separate conversation with Hubie McDonough, Reign Director of Hockey Operations, he also mentioned the loss of Brodzinski, the former St. Cloud State player who’s now having a breakout season.

A snake-bitten Brodzinski of course went his first 17 games last season without a goal and now through 36 games in 2016-17 leads the team in goals with 13.

“It’s funny because it started out last year and he didn’t score for so long,” McDonough said. “He hit post and post and post and post and finally he got one and then as he came on into March and April, he was a big part. And when he went down, that really deflated us in the playoffs. We missed that. He was really coming into his own and scoring and he was hot at the time and we really missed that against Lake Erie. We really missed him. And then we came back this year and he didn’t really continue the way he had finished and maybe that was from the injury and not playing, but I think that again, he’s coming into that now.”

At just over the halfway point of the Reign’s season and with the recent loss of Michael Mersch, the Reign desperately need Brodzinski, who had three of the team’s nine goals over the weekend, to continue producing. That weight and attention also falls on Adrian Kempe, another second-year pro who himself has seen his play rise of late. The former first-rounder has scored five of his 10 goals this season after the holiday break.

“I think that he started out a little slowly and he’s certainly come leaps and bounds since day one of this season,” McDonough said. “He’s going to get more ice time now with Merschy out and he’s playing in the middle and playing on the power play. He killed a little bit, not as much as he did at the start. They’re kind of saving him for the power play but that ice time is valuable to all these guys at this level, at this stage of their careers. That ice, ice, ice, ice, you’ve got to get out there. When he’s not playing, sometimes that’s a message being sent. The only thing you can do at this level is take away ice time. That’s the message that’s sent. I think that was delivered earlier in the year and now when he’s given the opportunity he’s been a little bit more feisty. He’s digging in corners, he’s battling for pucks and firing and we need him to, as we do with all the guys, we need them to step up and pick up the slack when other guys are out.”

Stothers is very careful to anoint any of his players as “arrived.” The development of NHL hopefuls is a process and the underlying reality is earning his trust while also performing at their capabilities and expectations he’s set for them, night in and night out. Although he gave LaDue high praise as noted previously in this post, he also said in that same breath that some night’s LaDue can look close to a Drew Doughty and the next night look like an old version of the coach himself.

Compliments are usually leveled off eventually from the coach, and that goes for all.

“I think [Kempe’s] starting to play more like we were expecting,” Stothers said. “I think there was a lot of hype for him in training camp and I don’t know if it was deserved or not. He showed you flashes of speed and everything else but the end result was, there was no points to show for it or whatever. Now you’re seeing the end result. I think he had two assists tonight, numerous chances, making things happen. That’s what Kempe can do for us. So, he’s really, slowly, I think gotten himself, I don’t know if it’s a confidence or a quiet confidence or he just feels better about himself. He’s taking advantage of the situation. He’s been very good and he’s only going to get better too. I try not to get too excited about guys like Kempe and LaDue because there’s always going to be that young guy consistency thing. So right now he’s improving each and every game. And you know what, he’s been moved around a lot too. If we could just get him to the point where we feel comfortable having him kill penalties, then I think we have a legitimate shorthanded threat.”

For Kempe to get there, he has to earn Stothers’ trust. The coach would not tip his hat as to what Kempe needs to do to earn it other than — “He needs to earn my trust” — but Brodzinski is already there. Brodzinski is not on the top PK unit but he does see some ice there.

The Reign play Wednesday, Friday and Saturday and then go into the All-Star break, something McDonough said is helpful for younger players who are still getting used to the rigorous schedule and demands of pro hockey.

“We’ll come back recharged after the break and I think [Brodzinski will] continue and Kempe will continue and you never know, maybe they’ll get a sniff with the Kings at some point, which would be really a boost to their confidence,” he said. 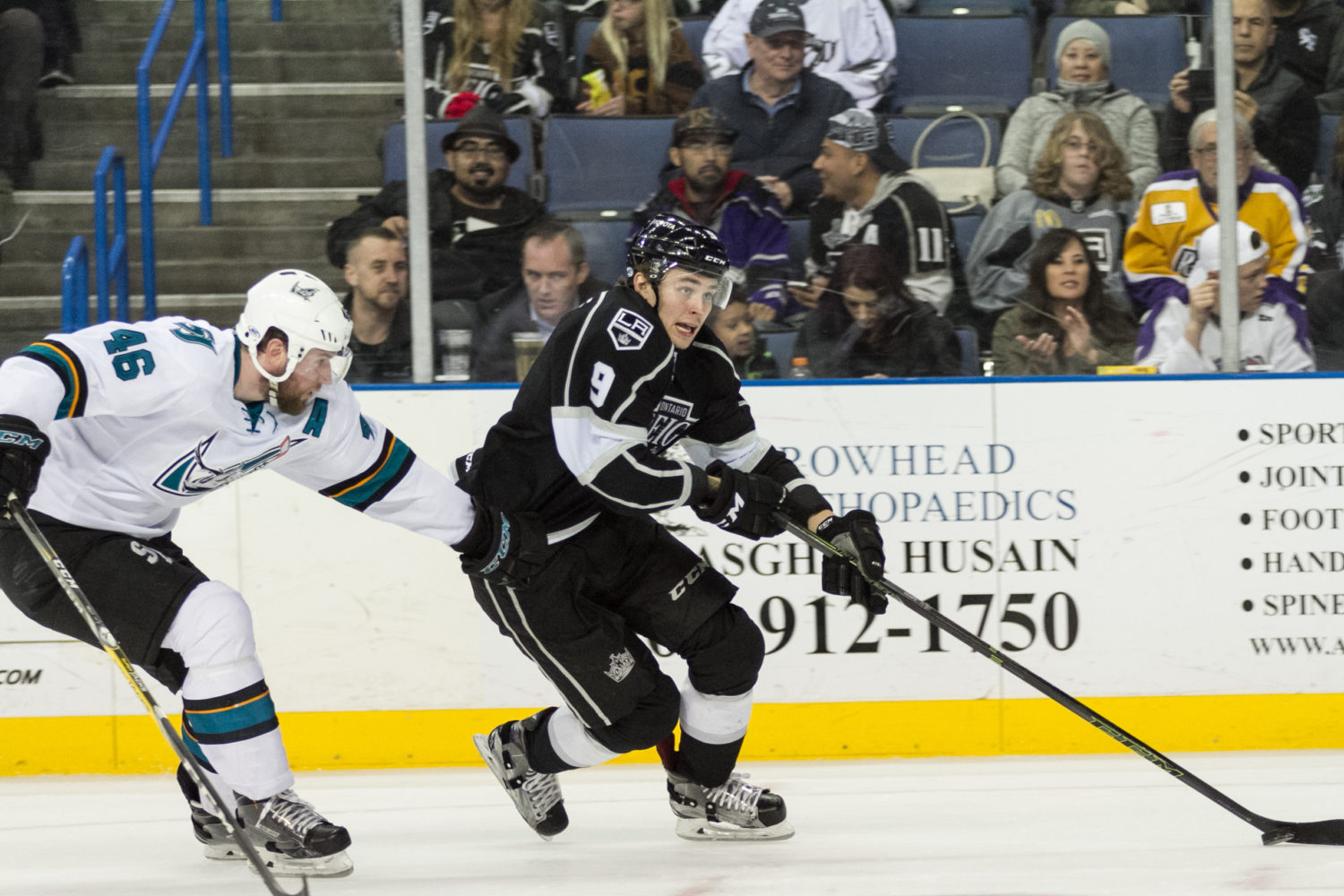 One thing has been noticeable from a season ago, and that’s the increased presence of Kings President and General Manager Dean Lombardi, who’s been at more home games and has joined the team on the road.

And it’s not just Lombardi, there are a lot of eyes on Reign players this season.

“I think so,” McDonough answered when asked if it’s felt like Lombardi has been around more. “I think last year Dean had a lot of things on his plate with the World Cup and all that, there’s just so many things that the man in charge has to do and this year he’s making a point to be around more so he can assess what’s going on here himself and not just taking in second hand from whoever it might be.

“So, he has been around but the development staff has been around a lot. They’ve come to a lot of games this year and that’s good for the guys to see. They know people are watching every night and they know people from other teams are watching every night too because it seems like there’s always five or six different scouts in the building here. Everybody likes coming to California.”

While holding his one-year-old, long blond-haired son William, veteran T.J. Hensick reminisced and discussed what hitting AHL point No. 500 meant to him.

“It makes you smile that people are still following you even though you’re trying to battle in the American League,” said the 31-year-old who’s in his first season with Ontario. “Family, friends, excited for the moment and it was nice to have this little guy and my wife here too. It’s a good feeling.”

With an assist on LaDue’s first period power play goal on Saturday against San Jose, Hensick became the 90th player in league history to hit the mark and said after the game he heard congrats from 30-something people.

“Linemates, teammates have texted me over the night and it just brings back good memories of good times with different players and it’s been fun,” said Hensick, who name-dropped former teammates Darren Haydar and Derek Nesbitt as helping him get to the milestone. “It’s been a great ride. I’ve enjoyed my time in the American Hockey League and hopefully there’s more to come.”

Hensick is in his 10th pro season and has been a welcomed addition for the Reign. He leads the team with 30 points (10-20=30). “It’s been exciting being here. I’ve enjoyed every minute of it,” he said.

So where will the puck go?

“He was hitting it around last night in the apartment,” Hensick said, regarding William, adding that he’ll eventually put it up with his first NHL goal. 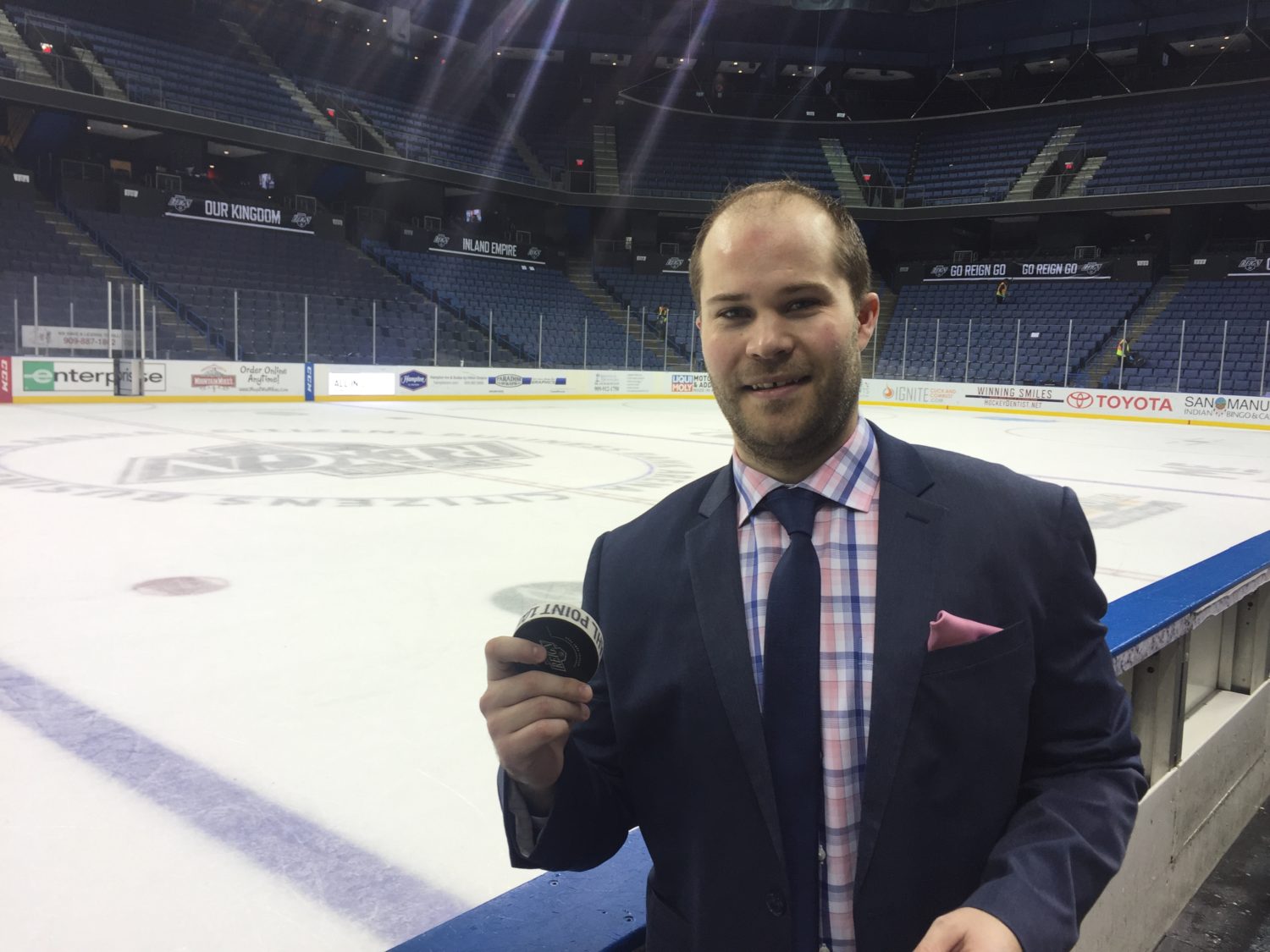 The Reign went 2-0-0-0 on the weekend in back-to-backs at home as they blew out San Jose 7-2 on Saturday night and beat San Diego in a shootout the following day 3-2. Brodzinski was at the forefront of both victories as he had two goals against San Jose and a tally in regulation on Sunday, his team-high 13th of the season, and the winner in the shootout. … Sam Herr went old-time hockey on the Ontario crowd on Saturday, recording a Gordie Howe hat trick (a goal, fight and assist in that order).