Darryl Sutter liked the play of Anze Kopitar’s line during the 4-2 loss to the New York Islanders on Saturday, even though the lines dissolved into various combinations after Nic Dowd suffered an injury midway through the second period.

While on one hand the team held a clear five-on-five advantage in shot attempts and scoring chances prior to the Islanders’ third period surge after Drew Doughty’s game-tying goal, any analysis of the direction of play or performance should be counterbalanced by the understanding that the Kings lost their third consecutive game in regulation, and that their opponent was closer to the bottom of the Eastern Conference standings than to a Wild Card spot.

It’s clear that in an attempt to rise up in the Western Conference, Los Angeles will need to bank on strong performances from its top players, and that includes Marian Gaborik. The veteran wing who was slow to get out of the gate after returning from a broken foot sustained at the World Cup was held without a point in Saturday’s loss but has three goals, five points and a plus-two rating to go along with 19 shots on goal over his last seven games.

“We had quite a bit of chances [against the Islanders], Gaborik said. “We could’ve been up first period by a few goals there, but yeah, we just have to capitalize on those chances. Just have another good start like that [on Monday] and hopefully get the lead and go from there. We have to get some points on this road trip starting [Monday]. We’re in a tight race there and we definitely need points to come back to playoffs.”

The Kings have games in hand on the teams above them in the standings, but they also had a glut of home games in hand prior to their recent seven-game home stand that ended with a disappointing 3-4-0 record. It’s one thing to talk about needing to take advantage and spur a rise in the standings, but that’s different from actually going into Madison Square Garden and denying excess looks to a Rangers team that ranks second in the NHL with 164 goals scored.

If there’s an aspect of the team’s play that can be improved and provide tangible benefits on the road, it’s first periods. Los Angeles was outscored 9-5 in first periods during the home stand, and by virtue of Jason Chimera’s goal on the first shot of the game against Peter Budaj on Saturday, now has a minus-eight first period goal differential this season.

“To get a lead and to play with a lead, I think that’s been missing since Christmas,” Gaborik said. “I think that’s important, obviously. Try to get more shots on net and get the shot total up again and just play a complete game for 60 minutes. Obviously we need to get the power play back on the scoring sheet and if we can put those things together, I think things will turn up.”

Gaborik skated alongside Dwight King and Anze Kopitar during practice Sunday morning at Madison Square Garden and will look to rekindle some of the chemistry that led to a strong performance against the Islanders before Dowd’s injury necessitated more mixing and matching. Kopitar played in a variety of roles that game and earned an assist on Jeff Carter’s goal. While he has eight points – one goal and seven assists – in the last six games, he’ll also look to generate more shots on goal after accounting for only five over that span. If historical precedent is worth anything, Kopitar recorded his third career hat trick against the Rangers in a 5-4 overtime win at Madison Square Garden last season.

He understands the importance of not letting medium-length losing streaks turn into streaks that have the potential to derail a season.

“Well I mean, you certainly don’t want to go on a skid like we are right now, so every game is important,” Kopitar said. “Maybe tomorrow moreso than previous ones, but you try to approach the game the same way as you would if you were on a three-game winning streak and then just come out, perform, give your all, and that’s it.”

Marian Gaborik, on returning to New York:
Well you know it’s always good to come back and play in this building. It was fun playing here when I was playing here for the Rangers and it’s always fun to come back as well. I mean, this is probably — it doesn’t get better than this to play and I think every player loves, at least most of the guys love playing here. Just the atmosphere and the vibe the Garden gives you and overall coming in for the game, kind of going through the city and everything, it’s got a lot of energy to it.

Gaborik, on what Dwight King does well as a line mate:
He creates room. He’s so good with the puck, positioning the puck and he’s strong on the puck. Holds on to it, brings it to the net or he can make plays so he creates room and then creates zone time which is — to play in fun zone, that’s what we need to do and he creates that.

Gaborik, on totaling five points in his last seven games, and whether he’s pleased with that:
Yeah I think so. I mean, I feel good out there. Moving my legs, making plays and then creating chances, having chances as well. Just got to bear those down, you know? It’s important when you get to that chance just have to bear down and try to put those in, because it’s important. Yeah so just even try to elevate, keep elevating my game, and keep going. 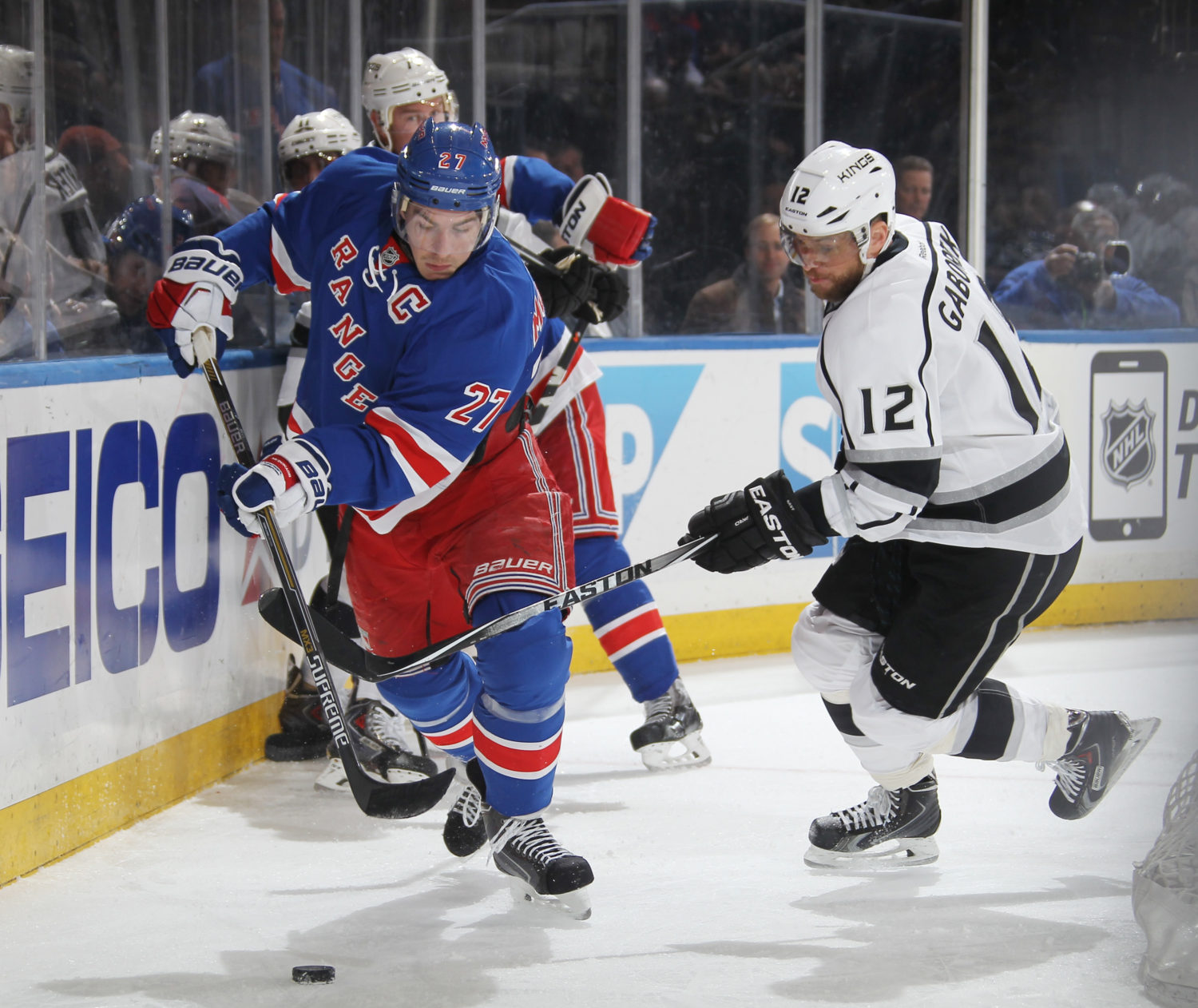