Approaching the dawn of All-Star Game festivities, another celebration will reach its twilight this weekend. The Kings’ semi-centennial recognition, which began on the 50-year anniversary of Los Angeles being awarded an NHL franchise on February 9, 2016, will officially conclude once All-Star Game attendees depart Staples Center following the finale of Sunday’s three-on-three tournament.

In acknowledging those who have made an impact of 50 years of Kings hockey, the team’s “Forever 50” outreach program will hit its apogee of community-minded endeavors this week.

Earlier this season, the Kings and Reign donated $1-million to Ronald McDonald House Inland Empire, and the Kings made a five-year, $1-million commitment to YMCA in which 5,000 hockey sticks will be distributed to local kids with the support of Delta Airlines. 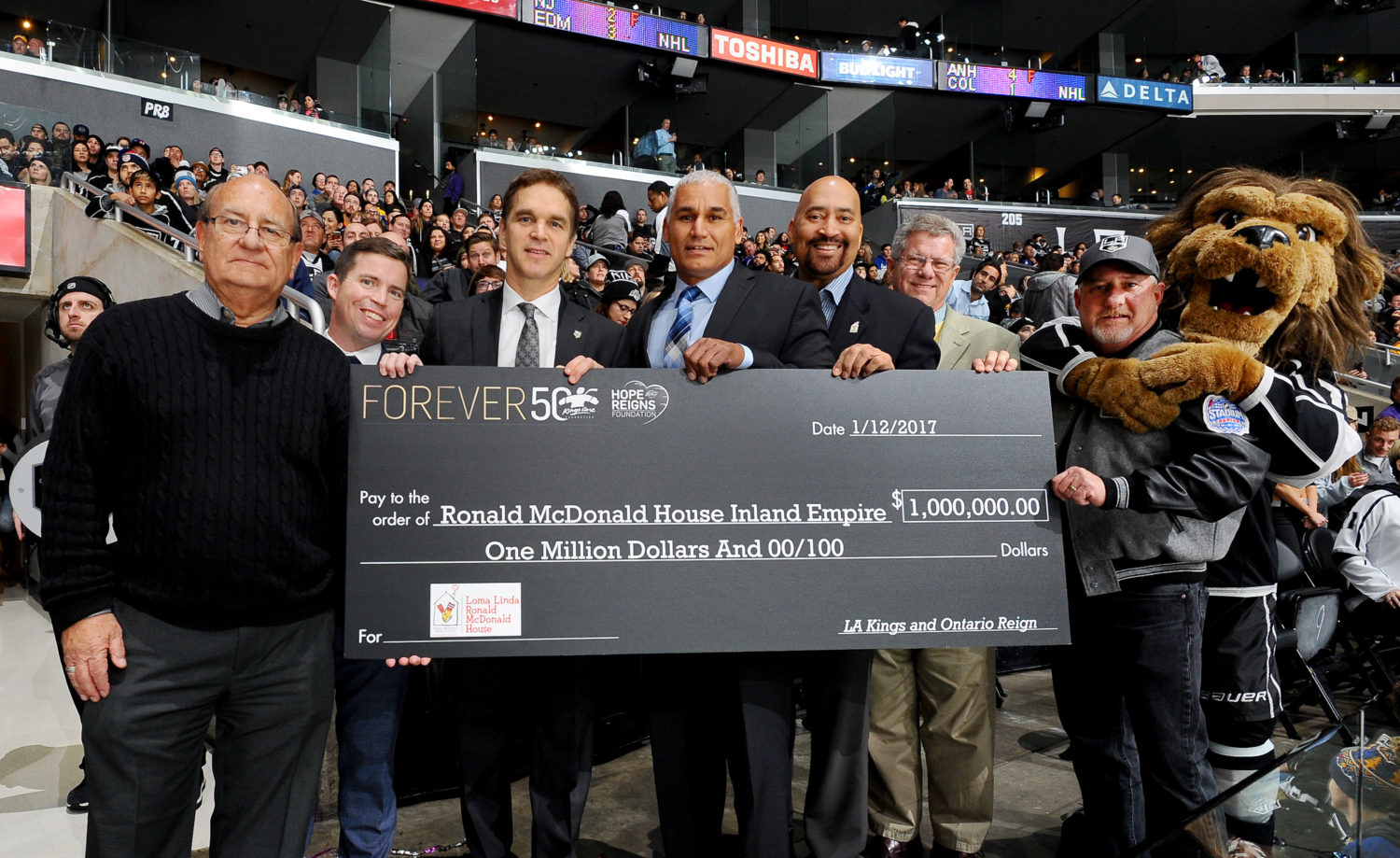 Here’s a quick table of contents, provided by Kings PR, of what will be taking place around the Southland this week. All events are open to the fans and the public. For additional information on the Forever 50 initiatives, and to volunteer at any of the events, please visit LAKings.com/volunteer.

Tuesday, January 24 (moved from Monday because of rain)
Enrich LA/LA Kings Garden Build, sponsored by Melissa’s Produce – The Kings and Melissa’s Produce will build an edible and interactive school garden for 600 students, 92% of which qualify for the free or reduced lunch program, at 20th Street Elementary. 20th Street Elementary is 94% Latino and half the student are English learners. A park ranger will maintain the garden on a weekly basis and engage with the school administration and students to create on-going lessons and learning opportunities surrounding the garden. Papa John’s Pizza will supply lunch for all participating volunteers.
• Location: 20th St. Elementary 1353 E 20th St, Los Angeles, CA 90011
• Timing: Shift One: 9 am – Noon; Shift Two: 1 – 4 pm

Tuesday, January 24
LA Kings Day at Discovery Cube LA – More than 1,000 children from schools and charitable organizations across Los Angeles will experience the Science of Hockey and engage with over a dozen other interactive exhibits at Discovery Cube LA, as well as the NHL Centennial Museum Truck, a 53-foot truck with an innovative interior featuring more than 1,000 square feet of interactive digital displays, original video content, one-of-a-kind historical memorabilia, unique photo moments and a social media wall. Bailey and the LA Kings Ice Crew will also be on hand for this full day of structured educational programming exclusively for LA Kings partners.
• Location: 11800 Foothill Blvd., Sylmar, CA 91342
• Timing: Kids will be arriving in three shifts (9 am – 11 am; 11:30 am – 1:30 pm; and 2 pm – 4 pm)

Thursday, January 26
Habitat for Humanity House and Play House Build – The L.A. Live Plaza will serve as the build site for one home and five playhouses, just steps away from STAPLES Center. Volunteers will be tasked with framing, installing doors and windows, roofing, painting and more.
• Location: 1111 S. Figueroa Street, Los Angeles, CA 90015
• Timing: 9 am – 3:30 pm

Friday, January 27
Kids Day at Fan Fair – The LA Kings and the NHL will reward students who are participating in the Future Goals program with an opportunity to experience NHL All-Star Fan Fair and hear from professionals in hockey who utilize the principles of Science, Technology, Engineering and Math daily.
• Location: 1201 S Figueroa St, Los Angeles, CA 90015
• Timing: 9 am – 12:30 pm

Also as previously announced by the NHL: