When Jake Muzzin wound up for a shot during a first period power play Thursday night, Dustin Brown was in his office, directly in front of the blue paint, taking away the goaltender’s eyes with a successful screen.

It wasn’t the first time Brown has helped facilitate offense from point blank range without touching the puck.

“I had a pretty good feeling just from the angle that Muzz was shooting at, he was inside the dot, that I was in a pretty good position,” he said.

While Brown’s offensive numbers don’t replicate the marks he hit early in his career, he remains one of the best players in the National Hockey League at screening goaltenders. It’s an art form within the sport, an ability that can be practiced and improved through repetition.

“There’s a lot of things that going in to being good at that role,” Assistant Coach Davis Payne said. “It’s not just ‘go there’ and ‘stand there,’ there’s a purpose to what you’re doing. There’s an initial angle that obviously has to be taken care of, but from there it’s like a one-on-one against you and the goaltender, making sure that you’re tied in with our shooter. It’s about opening up areas that we want to be able to shoot at, it’s about taking away areas that our strengths for goaltenders, making them move and making it difficult for them to see. At the same time, being a threat when the puck does get there, it’s not just the screen and the puck going past ‘em, there’s the next level element to it that we expect our guys to be good at.”

It also takes a bond with the defense, which often manifests itself in the unspoken understanding that should a shot get past the first wave of the defense that the forward in front of the net will have an opportunity to get a stick on it.

“You just try to shoot to either side of him,” Matt Greene said. “Those guys that are in front, they’re really good. They can get a stick on just about anything so you just try to, from the point you just try to make sure you get it by the first guy and then let those guys do it up front there.”

Having size as a netfront presence is always a plus but not a necessity. Tomas Holmstrom, one of the best netfront presences in the modern game, was only six-feet tall and 200 pounds, which is very similar to Brown’s six-foot, 216-pound stature.

Earlier today, Brown spoke with LA Kings Insider about the fundamentals of getting in front of a goaltender and taking away a line of sight as an effective weapon to produce offense.

Dustin Brown, on the first step he takes when preparing to screen the goaltender on a shot:
Just getting there, really. Every team plays it different; some teams box out, some other teams play above you, and then just knowing that going in, we generally know that before the game. With the box out teams it’s just harder, like on a goal like yesterday, when they go D to D, that’s when it becomes pretty difficult to screen. Last night they were playing above us, so I had free range to kind of move and you just try to line up on the puck, straight on the puck.

Brown, on whether it’s a constant battle to get between the defenders and the goaltender:
Sometimes, and the other part is the timing of it. There’s like moving screens, and it’s also just knowing the shooters, where they’re going to shoot and you just kind of know that just playing with the guys you play with, also what the goalies are doing. Some goalies look over top, some goalies look off your hip, so shifting on them.

Brown, on knowing where to position himself when the puck is passed between defensemen:
That’s probably the hardest part, is when it goes D to D. Because sometimes you can go too far over, I have a tendency actually to go too far over. So if it’s going from right D to left D I’ll almost go too far to the right, my right, and then the goalie’s just looking over this way – he sees it, right? So, the best thing is just you try to line up straight on the puck and then the goalie’s behind you.

Brown, on whether it’s an easy skill to practice:
Oh, yeah. You don’t often get hit with pucks. I mean, you’re practicing, you know where the pucks are. It’s something you can practice, for sure.

Brown, on whether he tried to emulate his net-front game after a certain player or if it came naturally:
No, I’ve been learning the last few years. We’ve been working on it a lot. Again, if I have the initial screen straight ahead, I’m pretty good on that. It’s whenever the puck’s moving. Just like the point I referenced of what’s behind you, it sometimes can be very difficult. [Reporter: That’s the thing, you’re looking at the shooter…] There’s a lot of times when you feel like you’re square to the shooter and then the shot comes in and you turn around the and goalie’s a foot off your hip and you’re a foot off the puck, you’re almost screening the strong-side post in the whole other side of the net.

Matt Greene, on whether defensemen are trying to shoot the puck low with a screen:
We’re just trying to shoot wherever you see it. That’s it. You just try to put it towards the stick there, a lot of teams in the league now are really good at blocking shots so you just to, again, get it to the net and get it to either side of your screen and let those guys tip it in. 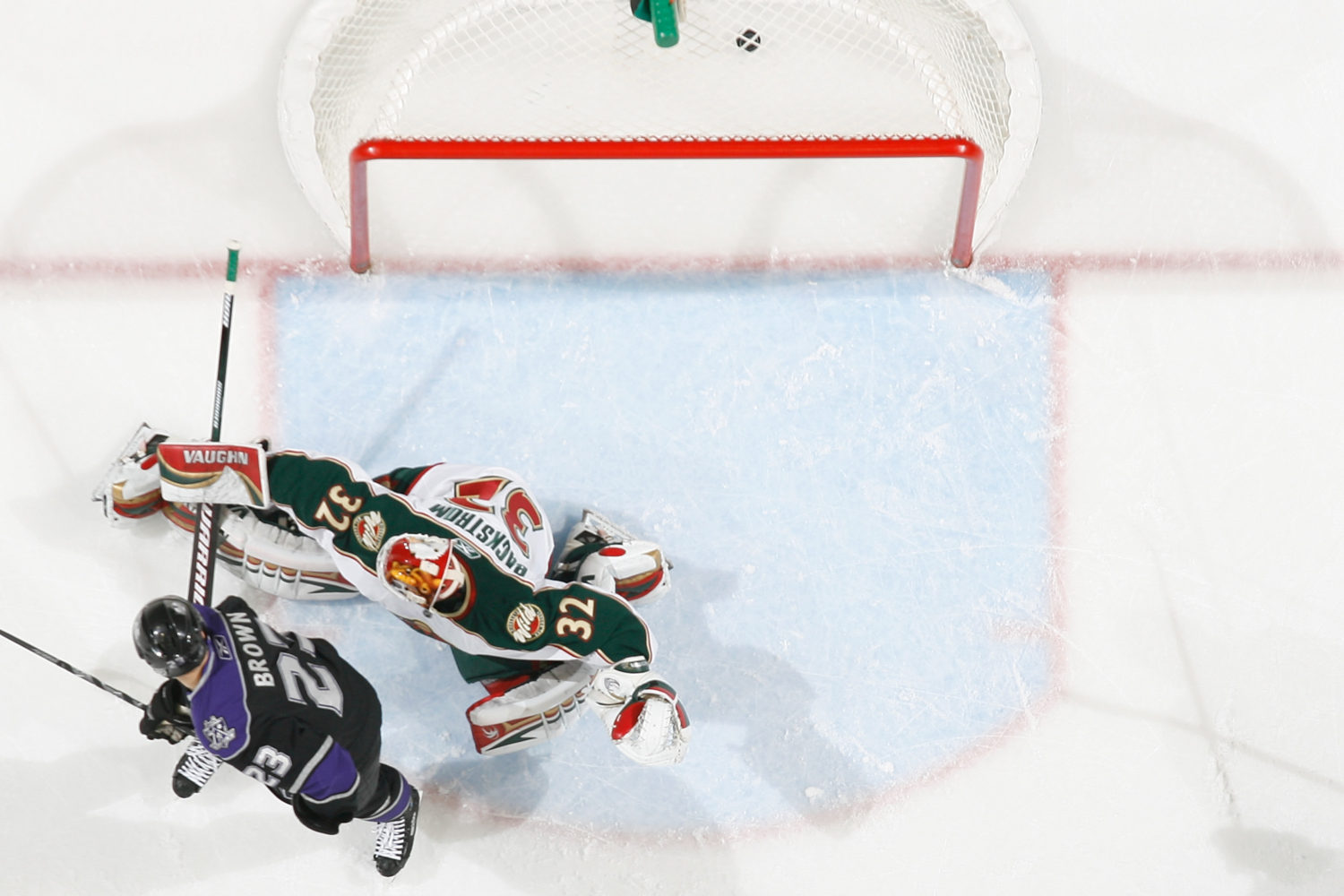