Reign and Condors play through downpour at Outdoor Classic

The story was the rain, much more so than the Reign and Condors.

The AHL teams played through a downpour on Saturday night at Bakersfield College’s Memorial Stadium, a game that ended with the host Condors coming from behind to win 3-2 in overtime.

After a halt in the first period caused by an issue with the glass near the Reign bench, the two teams returned to play the final 4:53 of the opening period on practically a pond as the rain wouldn’t let up and the game simply went on.

“It was insane. I think my skates were about 40 pounds,” said forward Jonny Brodzinski. “Any time you stopped, any time you turned, ice would get chipped up in the bottom of your skate and it was just like walking around. It was soggy. It was gross. The shoulder pads, the jersey was heavy. Especially if guys fell on the ice and got their gloves wet it was an absolute nightmare but it was fun to dig through that period.”

Ontario fared well in the rain as Brett Sutter scored off a Brodzinski rebound with 1:17 left in the first period. Justin Auger made it 2-0 just 1:21 into the second, roofing a shot over Bakersfield goalie Laurent Brossoit off the right wing, this after a just short break once the last few minutes of the first period finished.

“It was crazy. Skates and gloves got real bad. I was carrying my gloves up the hill after the second period there and it felt like they were about 10 pounds each,” Sutter said.

Even at one point in the second period the Condors’ Griffin Reinhart went to shoot from the wing and instead a huge splash of water did more damage on Reign goalie Jack Campbell than the puck could. Throughout the downpour as the puck would move up the ice a long jetski-like trail would follow it. 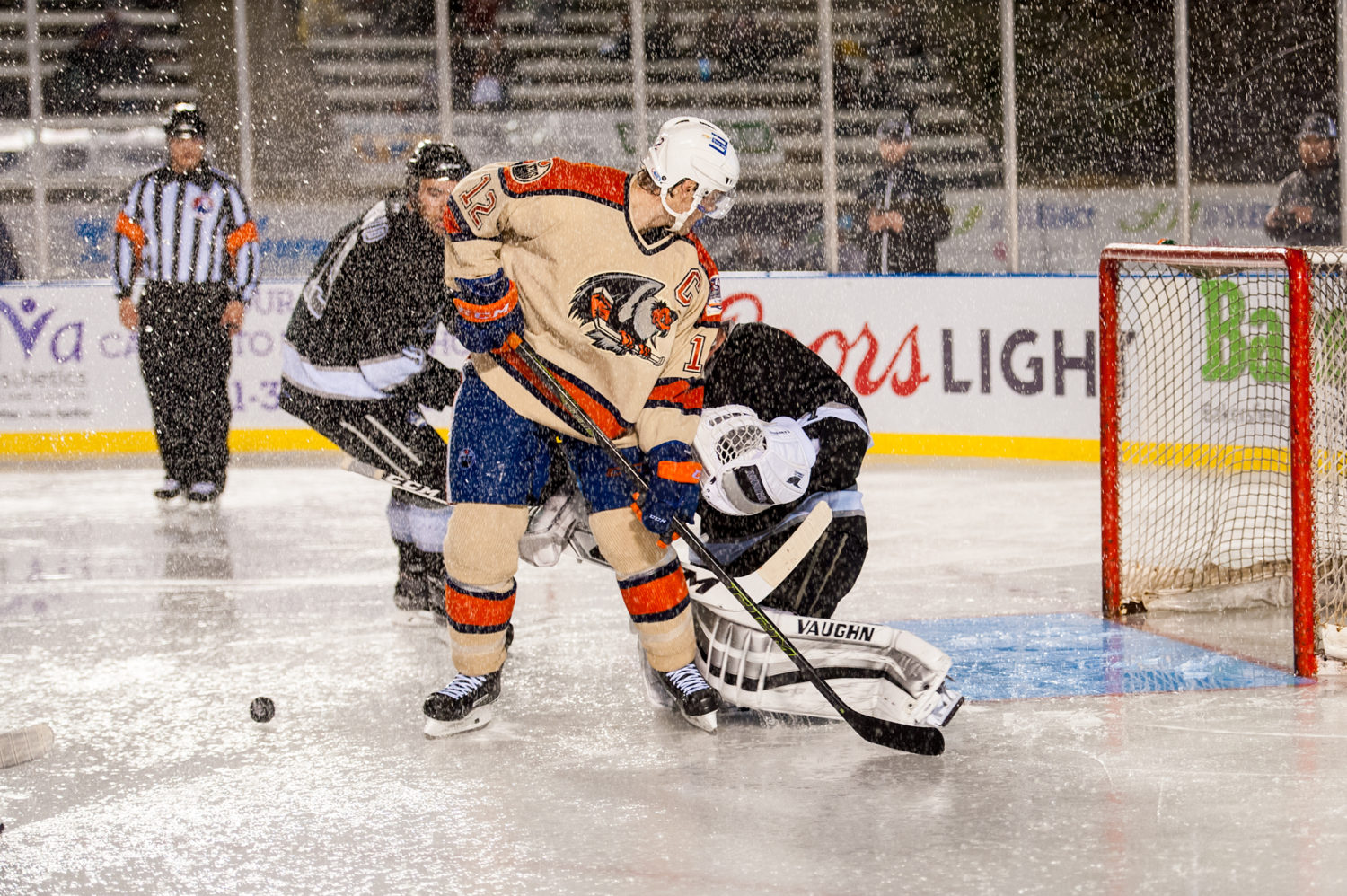 “It was coming down pretty good but once you get started you want to finish it,” Stothers said. “You don’t want to leave a job unfinished. Actually the players were great about it. They wanted to keep playing. There was a lot of water on the ice but our guys wanted to play and I talked to [Condors coach] Gerry [Fleming] and his guys wanted to play. So, why not?”

When asked what it was like just getting dumped on from the bench from his point of view, Stothers joked: “That’s what coaching is, you stand around and have people dump on ya. Today it was the weather. Always somebody dumping on ya when you’re a coach.”

It was the AHL’s second outdoor game in California in league history and ninth overall and it did not disappoint even for the 12,330 fans who left with wet clothing. Even the start of the game delayed, of course due to rain as the 6 p.m. start was pushed to 6:30.

But as the rain subsided the third period and a fresh Zambonied ice gave way to a whole new game and a chance for the players to skate in the best conditions of the evening.

Campbell’s shutout bid ended early in the final frame a shot from the right point by Mark Fayne got through to cut the Reign’s lead to 2-1 just 1:21 into the period. Bakersfield outshot Ontario 12-4 in the third period and tied the game on a backhander to the left of Campbell by Josh Currie with 2:17 remaining.

Forcing overtime and the momentum in their favor, Reinhart broke away from the backchecking pressure of Paul LaDue and beat Campbell glove side for the winner just 46 seconds into the extra frame.

The final score will forever remain a footnote in this one.

Both Brodzinski and Sutter used the words once in a lifetime to describe it.

“Playing in that second period I think both everybody on both sides was having a lot of fun,” Brodzinski said. “It was a downpour and puck’s sticking on the ice but it was a lot of fun.”