December 28 morning skate notes; Clifford among those banged up

Good afternoon from the team hotel, where it’s not quite as cozy as the living room depicted above.

-There were no real changes from the lines shown yesterday, though Andy Andreoff was part of a group that remained on the ice late and included Kyle Clifford (more on him in a moment), Brayden McNabb (IR) and Tom Gilbert. Andreoff took the first loop with Nick Shore and Jordan Nolan, so he was likely just getting a little bit of extra work in. It appears as though Brayden McNabb, who Darryl said yesterday is “available” but “needs some practice,” will have to wait at least one more game before re-entering the lineup. As noted yesterday, Tyler Toffoli (lower-body) is injured and is still at least a week away from being re-evaluated. Peter Budaj was the first goalie off the ice and is expected to start against Vancouver.

-Kyle Clifford is a bit dinged up. I had previously noted this following a practice in Nashville on December 21, but this was the first time it was acknowledged by Darryl Sutter. It came up when he was asked about the impact of Toffoli’s absence. “We’ve played the whole trip without [a full assortment of players]. We’ve had guys get hurt every game and finish games and nobody knows about it. So now we announce that [Toffoli] is not playing for a while, so it gives somebody else an opportunity and have guys that just move up a little bit in the lineup. When you look at it, we got Gaborik back, so hopefully he can get going for us. Brownie came back from injury, hopefully we can get Cliffy back from injury and just keep moving guys around.” Regarding Clifford, I’m led to believe he has an upper-body injury – one that is not a concussion – related to his tumble hard into the boards in Boston.

-Speaking of injuries, the Canucks have them. Jannik Hansen has a knee injury and will be out for the next four-to-six weeks. That shifts Jayson Megna up to the top line alongside the Sedin twins. Derek Dorsett (neck surgery), Erik Gudbranson (wrist surgery) and Philip Larsen (concussion) are also out. Willie Desjardins said there’s “a chance” Alex Edler (fractured finger) returns to the lineup, and because Alex Biega was skated hard at the end of the Canucks’ session, it’s probably a good chance. It is not at all an easy go right now for Vancouver, and the second question, which Desjardins did a good job of withholding his disdain for, carried an implication that the team hadn’t been “engaged.” That’s a weighty word to use with a coach, and Desjardins did say that it was a term that he prefers not to use. This will be Los Angeles’ first look at defenseman Troy Stecher, the 5-foot-10 local product who had an impressive training camp and has one goal and nine points in 26 games. Desjardins praised Stecher’s heart and compared him to Minnesota’s Jared Spurgeon, another player who might not crack six feet with his skates on but plays a highly effective role on the back end.

-The NHL’s holiday roster freeze has been lifted; should the Kings make any moves on this trip, they’ll be shared at or near when they become official. At some point, the team will have to activate McNabb, and there’s a good chance that Toffoli’s placement on injured reserve could be a corresponding move. As for later today, I’ll post Darryl Sutter’s quotes and a story on Drew Doughty before we head back to the rink. Let’s talk soon, Insiders. 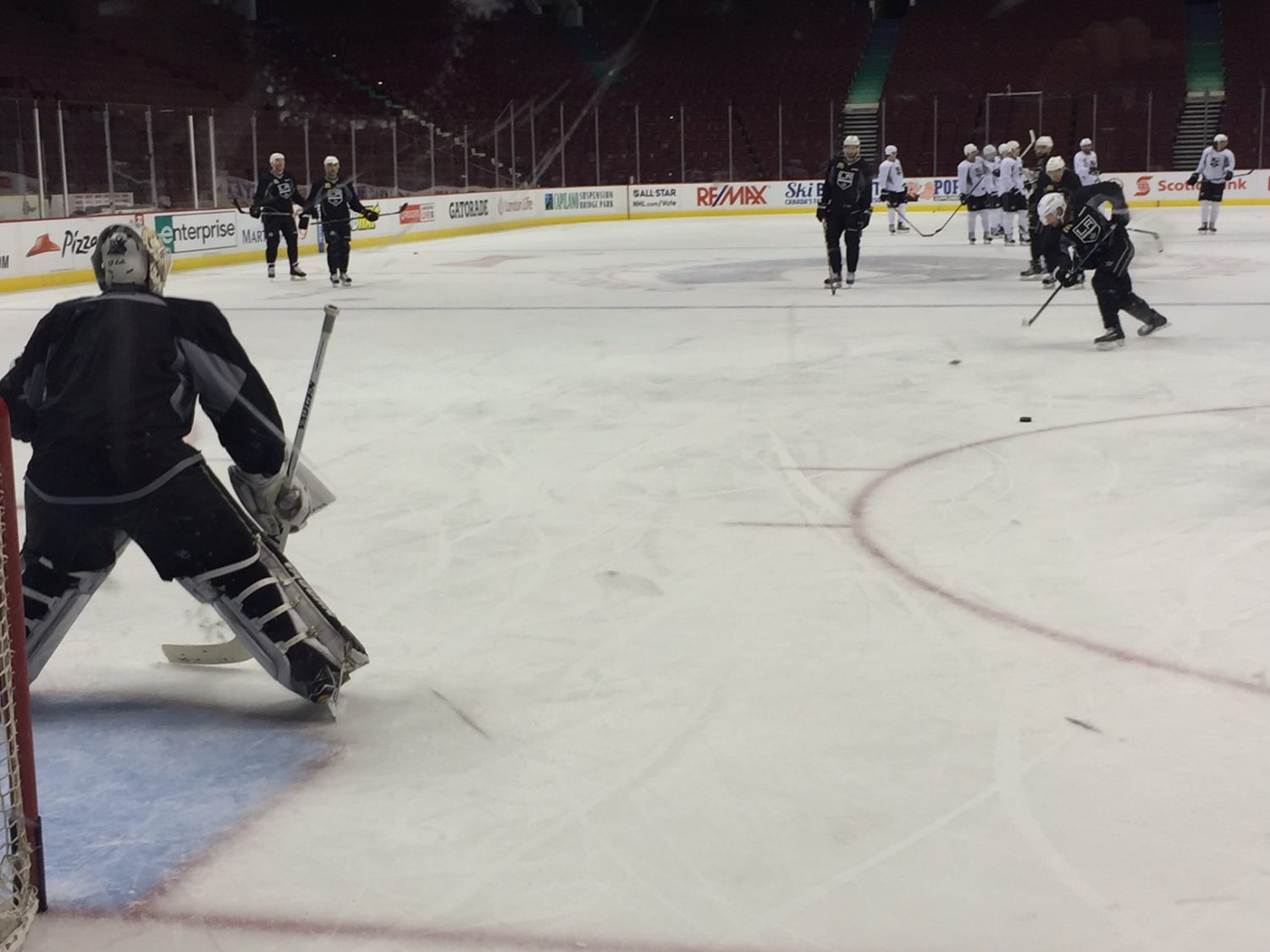