After 34 games, the expected Gaborik-Kopitar-Brown line will get a look - LA Kings Insider

After 34 games, the expected Gaborik-Kopitar-Brown line will get a look

Even though they’re conversation catalysts, the constant update of line combinations can be a moderate waste of time. Players are moved around due to efficiency, inefficiency, injury, health, ability to generate chemistry, the lacking of chemistry, when at home, when on the road, when facing highly productive lines, when facing quality depth lines, et cetera, et cetera. The only constant in line combinations is that change always seems to be around the corner.

But, on Friday in Dallas, the Kings moved several players around and slotted Marian Gaborik and Dustin Brown to the left and right of Anze Kopitar in the third period. The trio had generated a good portion of Los Angeles’ offense over the second half of the 2014 Stanley Cup run and had, over the summer, been eyed by those in hockey operations as a group that could open the season together.

And then Marian Gaborik got hurt at the World Cup, other players up front were sidelined by or played through injury, and it wasn’t until seven minutes had passed in the third period on December 23 that the group got a string of looks together. The extremely small sample size was just that: Dallas didn’t register a shot attempt while the three were on the ice together. (Los Angeles had registered four, though that means nothing heading into Wednesday’s game in Vancouver.)

With Tyler Toffoli sidelined for the near future because of a lower-body injury – the winger did not travel with the team Tuesday and is “at least” a week from being reevaluated, according to Sutter – the Gaborik-Kopitar-Brown line will need to not just face top competition, but also produce.

“Yeah, I mean we’ve had success in the past and probably not as much success in the last couple years as we would’ve liked, but with Ty going out and things kind of change – you guys have been around long enough, things change quite a bit around here – I think it’s just important for us to be a really good line,” Brown said.

Both Kopitar and Brown spoke with reporters about the reunification of their familiar group and the second leg of nine consecutive road games:

Anze Kopitar, on playing alongside Marian Gaborik and Dustin Brown again:
Yeah, I mean I think it’s somewhat the sense of comfort, just because we have played before and we’ve done pretty well together, too, so it’s nice. I think we played, what was it, the last period of the Dallas game together, too, so I guess it was kind of in the making. Try to play now where we’re getting into a stretch of where obviously every game is critical – not that it wasn’t before – but now it magnifies a little bit just because of how tight it is again in our division. Now, four games in a row, I think, are in our division now, so it’s a big stretch for us.

Kopitar, on whether Darryl Sutter explains the switch, or whether players just receive color-coded jerseys in their dressing room stalls:
Usually you just find your jerseys in the lockers, and then that’s it. I don’t think there’s a whole lot of explanation needed in this case. We all know we got put together, and now it’s a matter of going out there and performing.

Kopitar, on his goal drought:
I’d like to score another goal soon, yeah. I’ve had some chances and some not-so-great bounces, but it’s something obviously that is definitely on the back of my mind, but I don’t want to be focused on it too much. I think even this (last) trip, it was not a bad trip. We brought some points back, but now, as I said before, this stretch coming up is huge and myself and everybody else, we’ve got to make sure that we’re ready for it.

Kopitar, on anything special to treat the Christmas break in advance of this current trip:
Nothing, really. Obviously there are days off where you spend time with family, you get your much-needed rest. Seven games in 12 days, it’s one of the tougher schedules, probably, that we’re going to face throughout the season. You get your rest and you recharge a little bit, obviously. You get your mind off hockey since it’s Christmastime and all that. Now, once you’re back here, it’s obviously exciting to be back. I think two, three days is plenty without hockey, and once everybody gets back here is excited and ready to go again.

Kopitar, on wanting to be more secure in a playoff spot:
For sure, and that’s why this stretch coming up now is so critical. Especially division games, Darryl’s been stressing about them all the time, and we understand the importance of them. It’s going to be big. Obviously we want to be in a bit of a safer spot, but I still think it’s not terrible where we are right now, so we’ve just got to keep on going, plugging away, and racking up points.

Dustin Brown, on whether Sutter shared messages about particular line combinations:
He talked to us out there a little bit about just being ready, especially with the teams we’re playing, what type of opportunity we’re going to get, and being ready for those. It’s just an opportunity to, like I said, Kopi’s one of the best players in the world, so for the other guys, it’s a big opportunity for me to get to play with a player like that.

Brown, on whether he’s surprised by Kopitar’s three goals this season:
Yeah, I mean, if you look at Kop, the thing is, he’s got three goals. I talk to him all the time about it. [Reporter: Kiddingly, or seriously?] Kiddingly and both, but if you look at his chances, I always tell him – I’ve only got one more than him and that type of thing – but if you look at his play, and you kind of touched on it, he does so much more in other areas, but it’s not like he’s not getting opportunities. That last road trip, he puts a double-post off. It’s bounces, and then you see the flipside of it, Carts has that. He’s got what, 18, 19 goals? If you ask Carts, half the time he shoots it right at the goalie and it goes in the net. That’s partly how Carts has been his whole career, I think. Kopi’s kind of been the other way. Like, there are spurts where he just buries the puck, then he’s had stretches like this before. I think for me, we all go through it as players. When you really start to worry, it’s more when you’re not getting the looks. He’s snakebitten a little bit right now, but he’s getting looks, he’s getting opportunities, they’re just not going in for him right now.

Brown, on whether he was excited to get back on a plane:
Oh, yeah. The three days were good. Quite honest, I’m excited to play games. I think at least for me individually, the more we play, the better I feel. I think we probably collectively as a group, we play better the more we get into a rhythm. The road trip was a good one. I guess we’re finishing it now, but I think as a group we play better when we’re playing games.

Brown, on being away from family on road trips:
It’s definitely quieter. I’ll catch up on sleep, but like I said, the three days were awesome. I think it’s one of the better things – to have those three days, it’s a nice break for guys with family, and for guys who don’t have family, you get away and get some times.

Brown, on coping with Tyler Toffoli’s injury:
I mean, it’s always hard to lose a player like that, especially with his offensive ability. He’s one of those players that plays all situations, which is hard to overcome, but just like any other injury, it’s an opportunity for other guys to step up. I’ve always said this about our team: we don’t rely on three or four guys. Generally, if you look at a lot of our really good games, we’ve got scoring from all four lines, we’ve got contributions on the back end, so we’ve weathered it before. You’ve got to deal with that. Everyone deals with injuries throughout the year. 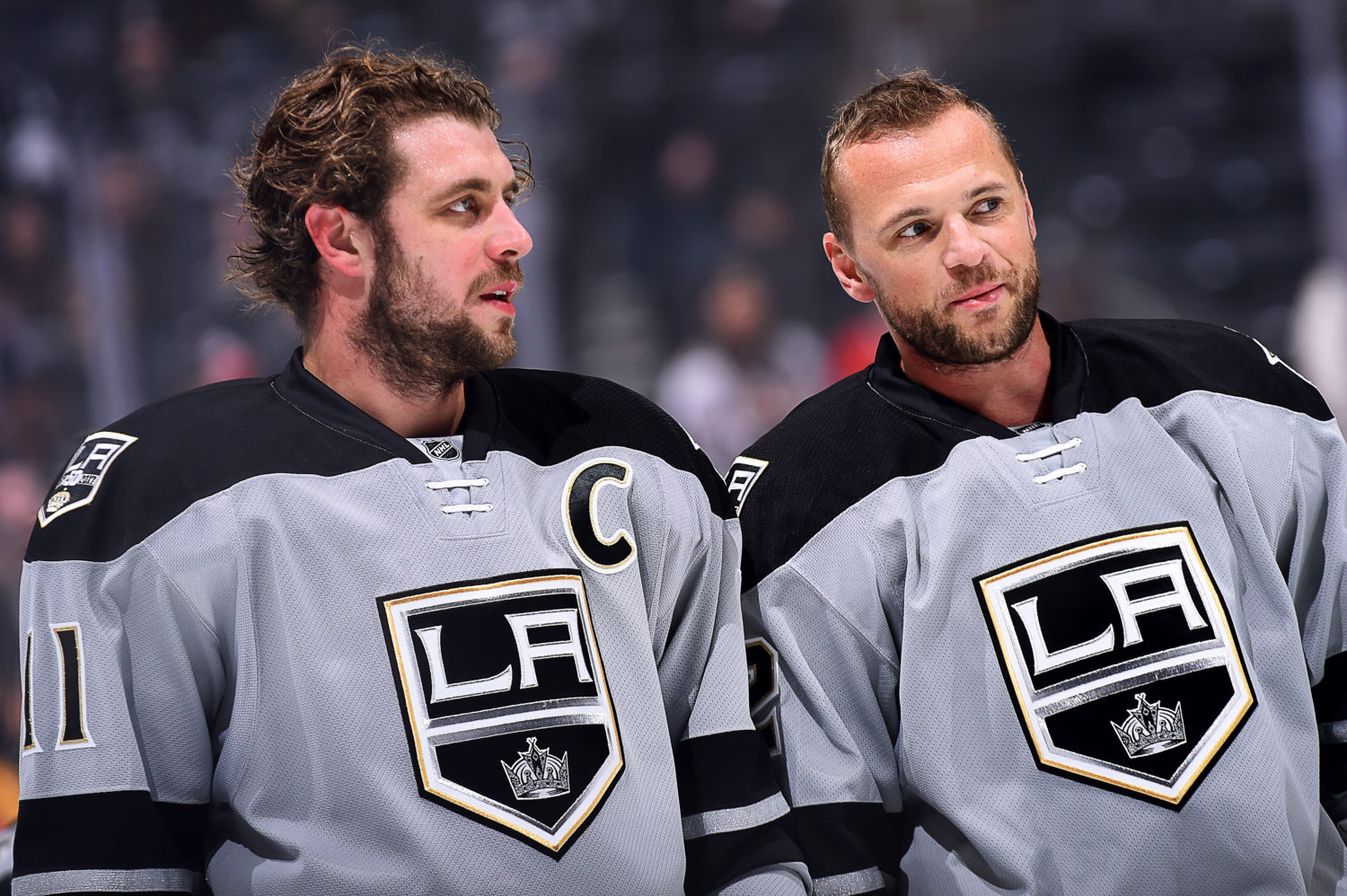