While the Kings are most focused on righting their footing on this road trip, there was still a sense of nostalgia as several local players took a morning skate on an ice surface for very likely the last time in their NHL careers. Next season, the Detroit Red Wings (and the Pistons) will move to Little Caesars Arena, which is currently under construction several blocks away.

Joe Louis Arena hasn’t been particularly hospitable to the Kings recently – Los Angeles is 0-5-1 at Joe Louis Arena since Alexei Ponikarovsky and Anze Kopitar scored and Jonathan Quick made 28 saves in a 2-1 win on March 9, 2011 – but there is still a strong connection between several local players and a rink that served as a loud and intimidating home for a terrific string of Detroit Red Wings teams during a special time and place in hockey history. It might be a stretch to call Grand Ledge native Matt Greene a “southeast” Michigander, but Greene, who did not attend Red Wings games growing up, remembered attending the Great Lakes Invitational tournament with his family around Christmastime. Alec Martinez and Jeff Zatkoff both played for the Little Caesars youth program and had appeared on the ice well before their collegiate careers brought them to Joe Louis Arena for the CCHA Super Six. Both Martinez, who was in the stands to watch Detroit defeat Philadelphia and claim the 1997 Stanley Cup, and Zatkoff recalled the unique smell of the arena.

Ithaca, New York native Dustin Brown has memories that will remain with him of playing his first NHL game.

“They had won the Cup two years before that,” Brown said. “So I’m just an 18-year-old trying to make it, right? I just remember looking up at warm-up, I think Fedorov was on that team as well, still now that I think about it. I mean, they had so many guys. I remember in warm-up just not really warming up, just kind of watching, you know?”

I also really wanted to speak with Kevin Gravel, who grew up in Michigan’s Upper Peninsula but also has several Joe Louis Arena memories. Unfortunately I wasn’t able to speak with Gravel today as he remained on the ice at the morning skate and wasn’t available during media availability, but I look forward to hearing some of his recollections later and sharing them here. 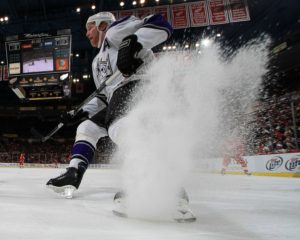 Grand Ledge native Matt Greene, on Joe Louis Arena:
It’s a great building. I spent a lot of time there growing up and there’s a lot of history there. I watched a lot of games on TV that happened there and it’s a cool experience, but I think the city’s ready for a new rink, the team is, and it’ll be fun to kind of see it passing along.

Greene, on whether he was a fan of the Red Wings as a kid growing up in Michigan:
Yeah I loved the Wings like everybody does, just never went to any games when I was younger. But always followed along on TV or the radio, and that was my team growing up.

Greene, on watching the Red Wings in the late ‘90s and early 2000s:
It was great, but what people don’t realize is late ‘80s and early 90’s was a pretty bad team so I think fans really paid their dues with them and they stuck with the process. They had Yzerman all along but then they added a lot of pieces through the draft and it was a lot of fun to watch in the mid-90s, the late 90s and then through. But there were definitely some down years and I think it kind of paid off, but it was a lot of fun to watch. They had a lot of characters on that team, too. Probert, Kocur, you know, Grind Line, and a lot of great players, too, a lot of Hall of Famers. 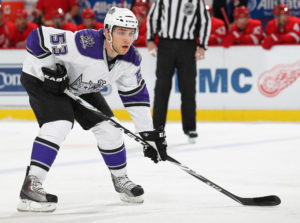 Rochester Hills native Alec Martinez, on watching the Red Wings in the late ‘90s and early 2000s:
For the majority of my childhood the Red Wings were just that, they were awesome. They dominated the league. It was a really fun thing to be a part of. Obviously it was everywhere you went. I mean, obviously all the radio stations jumping on board, I think a couple of local bands put out CD’s that were all about the Red Wings and little things like that. You know, the Wings were always really active in the community and the youth hockey programs, so like I was just saying earlier, that Little Caesars [minor program] obviously being part of the Ilitch family and all that, they were big sponsors of youth hockey in Detroit, so you were constantly immersed in it and it was definitely something really special to be a part of. I guess remotely being part of, or maybe not a part of but to be around and growing up as a kid you always obviously go to Red Wings games. My dad and I were actually fortunate enough, I was at the game when they won the Cup in Game 4 against Philly, so that’s a really special moment that I share with my Dad and I think I was eight or nine years old, old enough to remember and understand. But yeah, I mean you could go on and on, I don’t even know how many Hall of Famers were on that team but I mean, they were stacked and it was really fun to watch.

Martinez, on playing at Joe Louis Arena with the Little Caesars program:
My championships were at Joe Louis. You know, growing up there and then going to games, watching games, I think once or twice a year almost every team it seemed like at the time in Detroit got to go to the Joe and practice one day and that was something really special, especially as a little kid. And obviously I moved on to college and the CCHA [tournaments] were always at the Joe, so I’ve got a lot of memories here.

Martinez, on whether there’s time for nostalgia when he enters the Joe or it’s just all business:
I mean, you obviously think about it a little bit. It’s a big part of your childhood but that said, it’s business, and these are some really, really big games for us on this trip and we’ve got to be better than we were [Tuesday] night and [Thursday] once it comes to getting to the rink it’s going to be all business and that’s two points that we need to get. 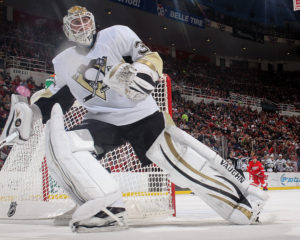 Detroit native Jeff Zatkoff, on whether he’ll have any nostalgia when getting on to the ice:
Yeah, I mean, there always is. I grew up going to games there as a little kid, watching the Wings win the Cup there. So when you grow up wanting to play in the NHL, that’s kind of the building and everything you envision yourself in. Obviously I played for Little Caesars, so you get to play at that rink, and I played there in college and I played there with Pittsburgh a few times, so I have a lot of good memories in that rink. So it’s always special coming back to the place you grew up in, coming back now 20 years later, it’s pretty wild.

Zatkoff, on specific memories he’ll keep with him of the Joe:
Yeah, I remember watching the Russian Five there, obviously the playoffs with the octopus and the squid on the ice every game, and I think it’s just one of those arenas that has a smell. Like, you walk in and you know it’s Joe Louis. It’s like Little Caesars pizza and beer. There’s a lot of history to it and it’s not like the new-age arenas, it’s got the old scoreboard so it does kind of have that nostalgic feel. So it’s a fun rink to play in, I mean not just because I’m from Michigan – that obviously adds to it – but I think if you ask anyone it’s a fun rink to play in because it’s different than a lot of the rinks we play in nowadays. 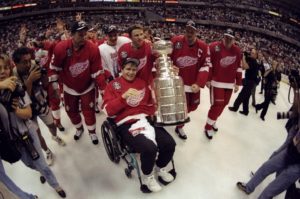 Helene Elliott, on the memories she’ll take with her as she goes to the Joe for the last time:
Just memories of seeing some incredible hockey players. You know, it’s funny, Vladimir Konstantinov comes to mind immediately, and the tragedy that he went through. Pavel Datsyuk, Chris Osgood, Igor Larionov. You remember the moments and the games and the championships, and obviously the enthusiasm of the fans, the knowledge of the fans. It just was a terrific place to watch a hockey game, it really was. It could use some improvements, but everything kind of runs it course and it’s time for a new arena for them.

Elliott, on going to the Joe in the late ‘90s and early 2000s:
I had seen Larionov play Olympic hockey at an incredibly elite level for so long, and to be able to watch him and his wizardry and talk to him and get to know him a little bit, I mean, just an incredible guy to talk to. Just the professor, I mean, just such hockey knowledge. But you’d walk into that building and the Red Wings always had that air of, I don’t want to say over-confidence, but they had a swagger. They were a damn good team and they knew it, and they played such a good style of hockey, too. It wasn’t like it was, forgive me, the New Jersey Devils stifling hockey. The Red Wings could skate, the Red Wings could score, their defense was a lot better than people might remember, but they played complete hockey. You also always had the chance of running into Scotty Bowman, and that was always like going to Hockey University, any conversation with him. So it was always a place that you looked forward to going and watching these world class players and knowing you were probably going to see a really good game.

Getty Images doesn’t have photos of Kings-Wings games before 2000, but here are several shots of current and former Kings playing at the famed NHL rink, including photos from the playoff series between the teams at the start of the previous decade: 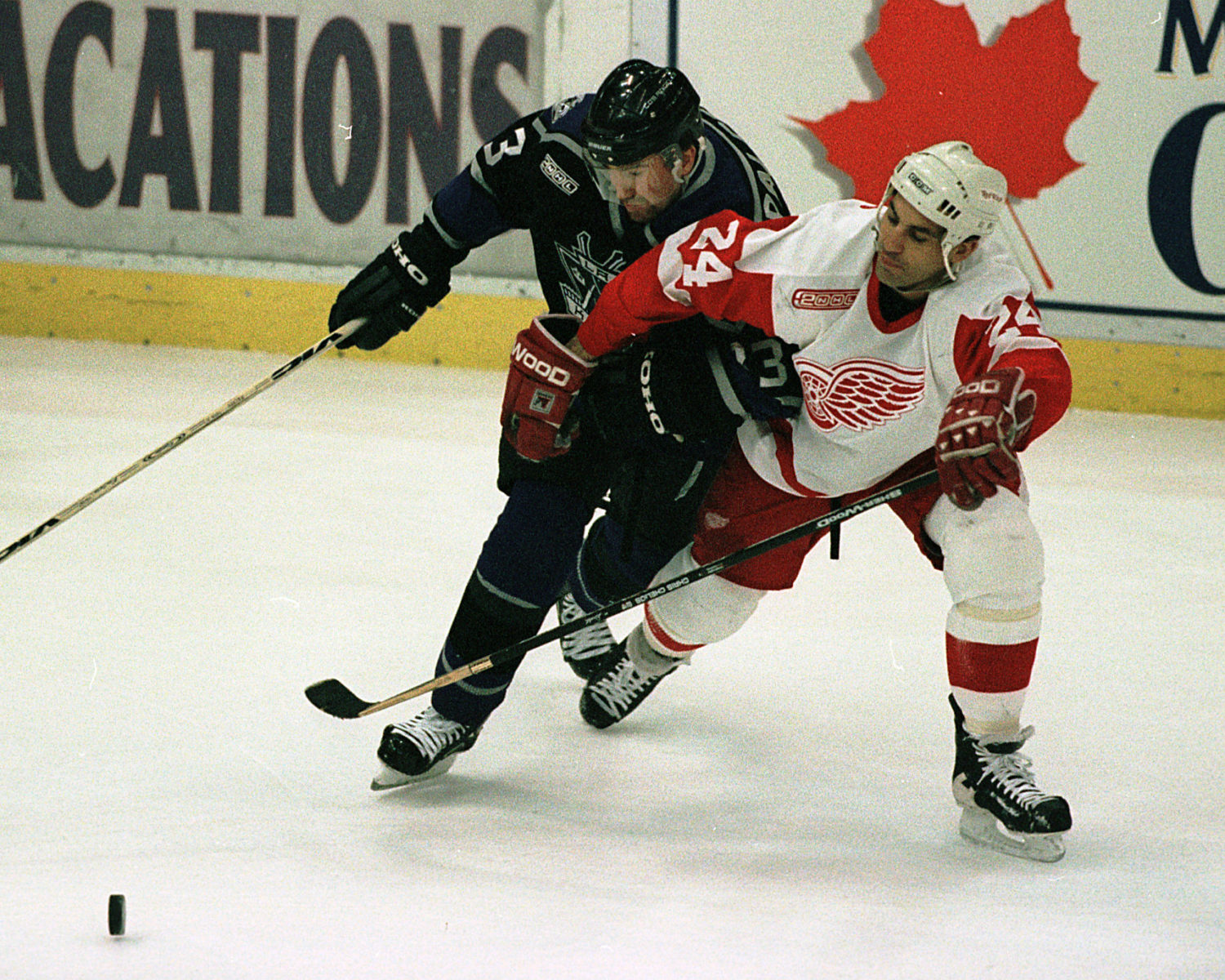 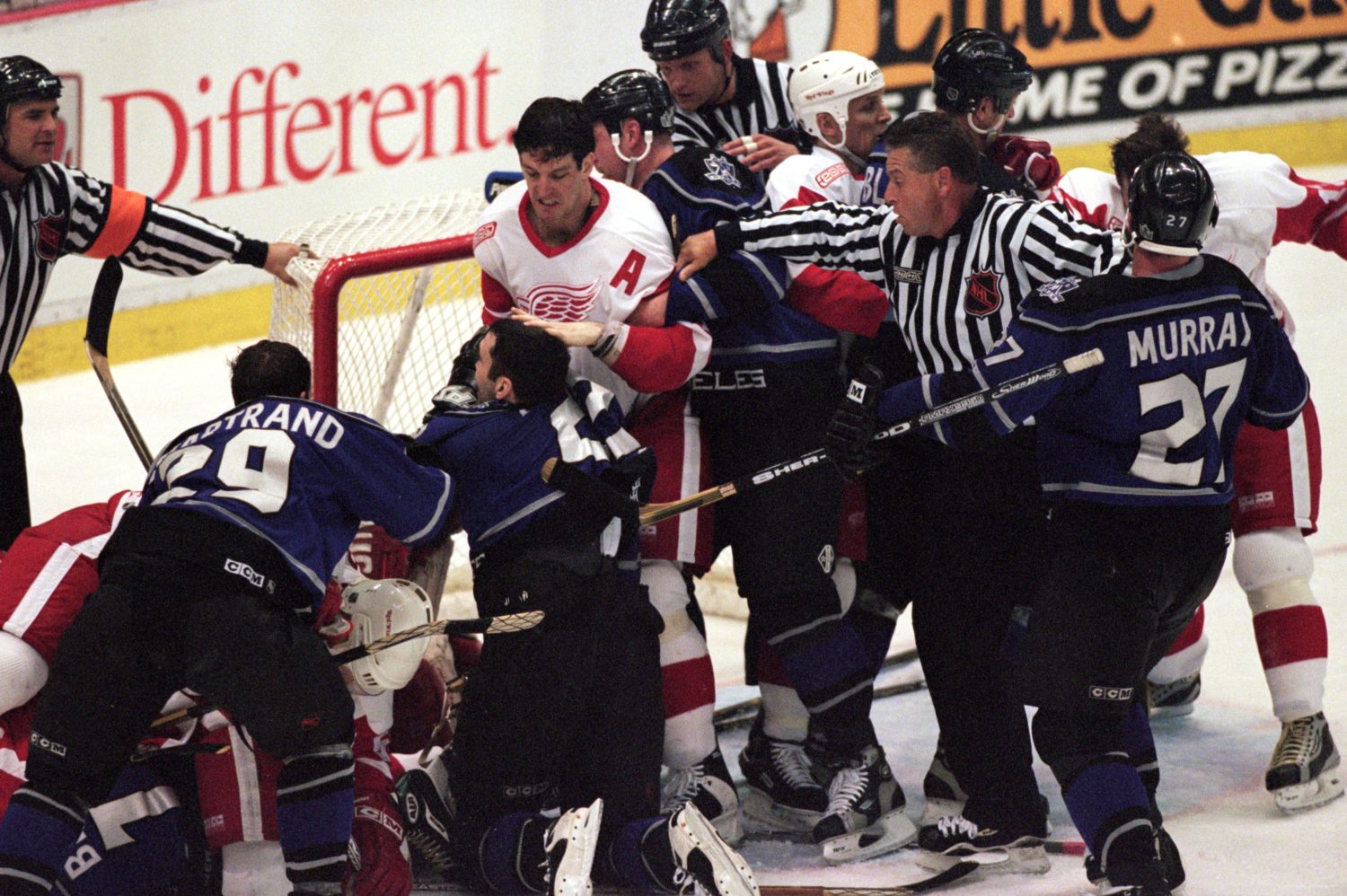 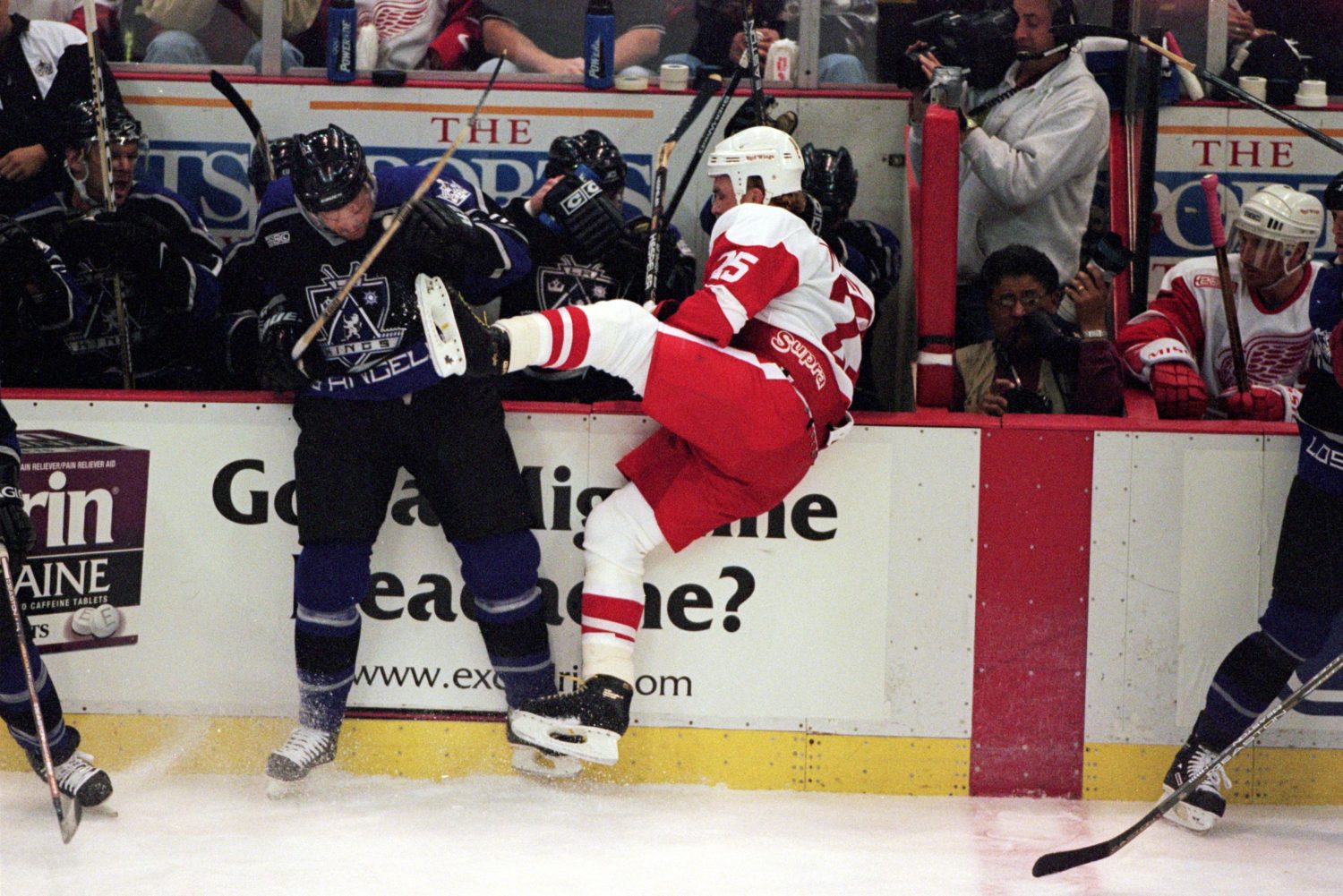 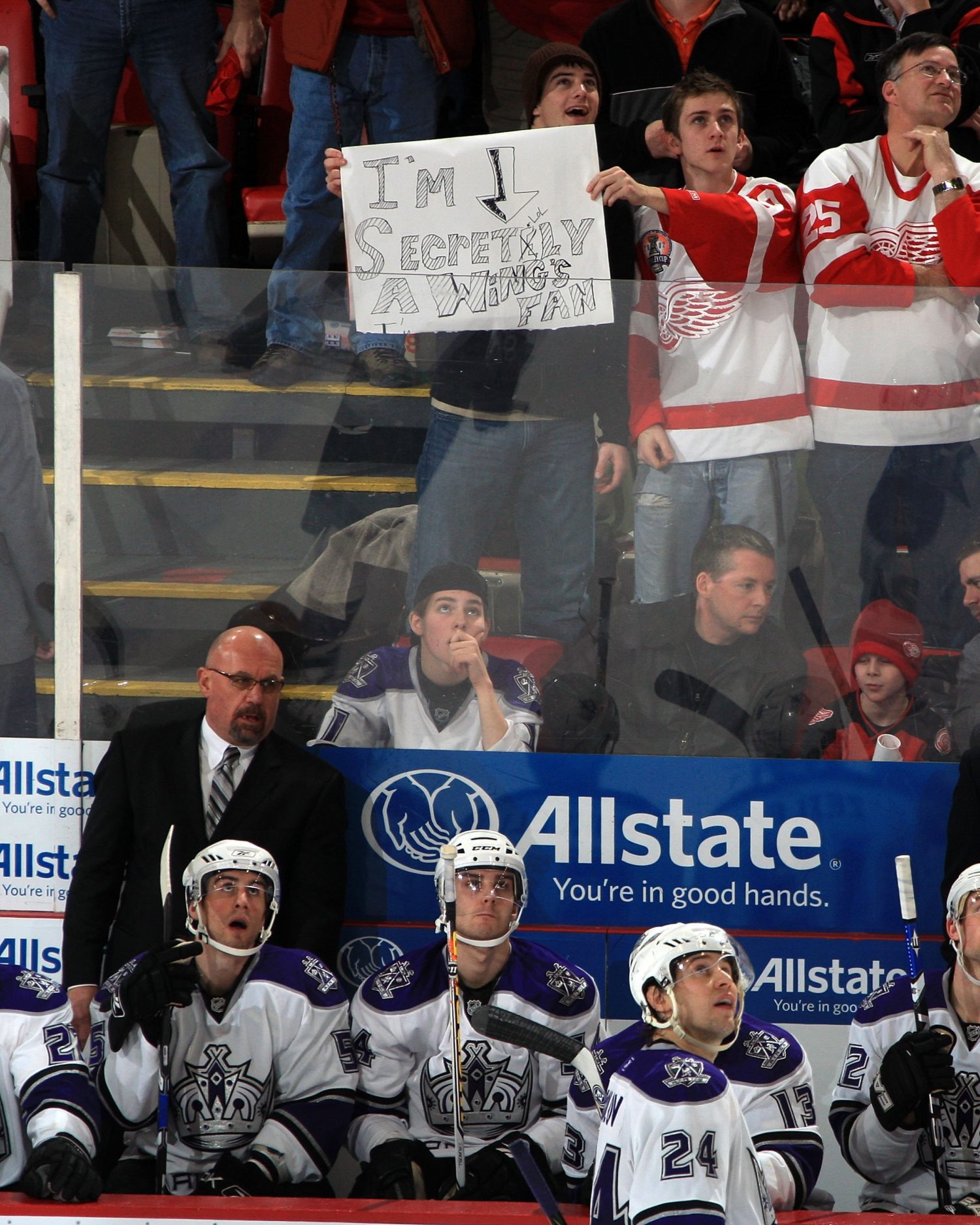 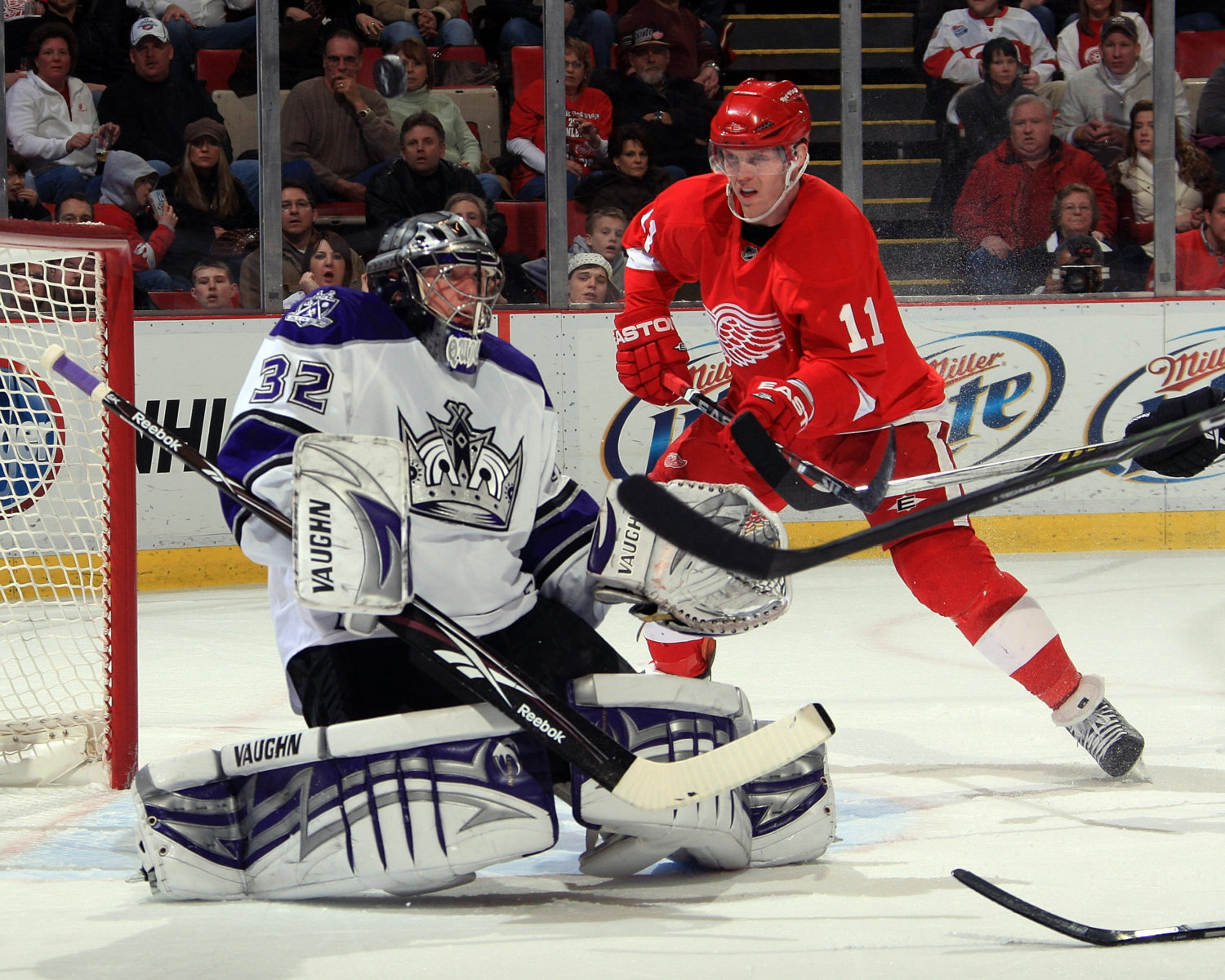 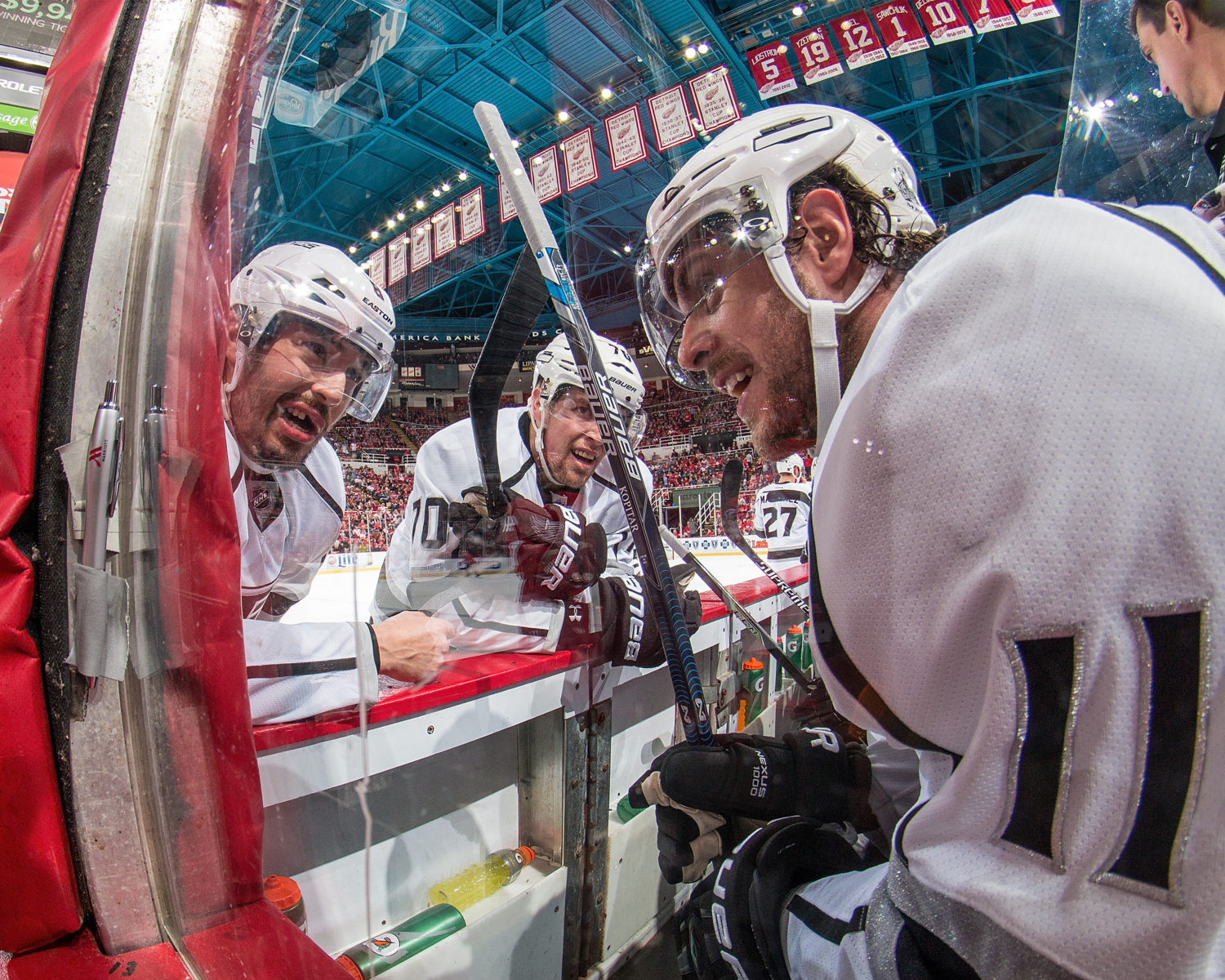 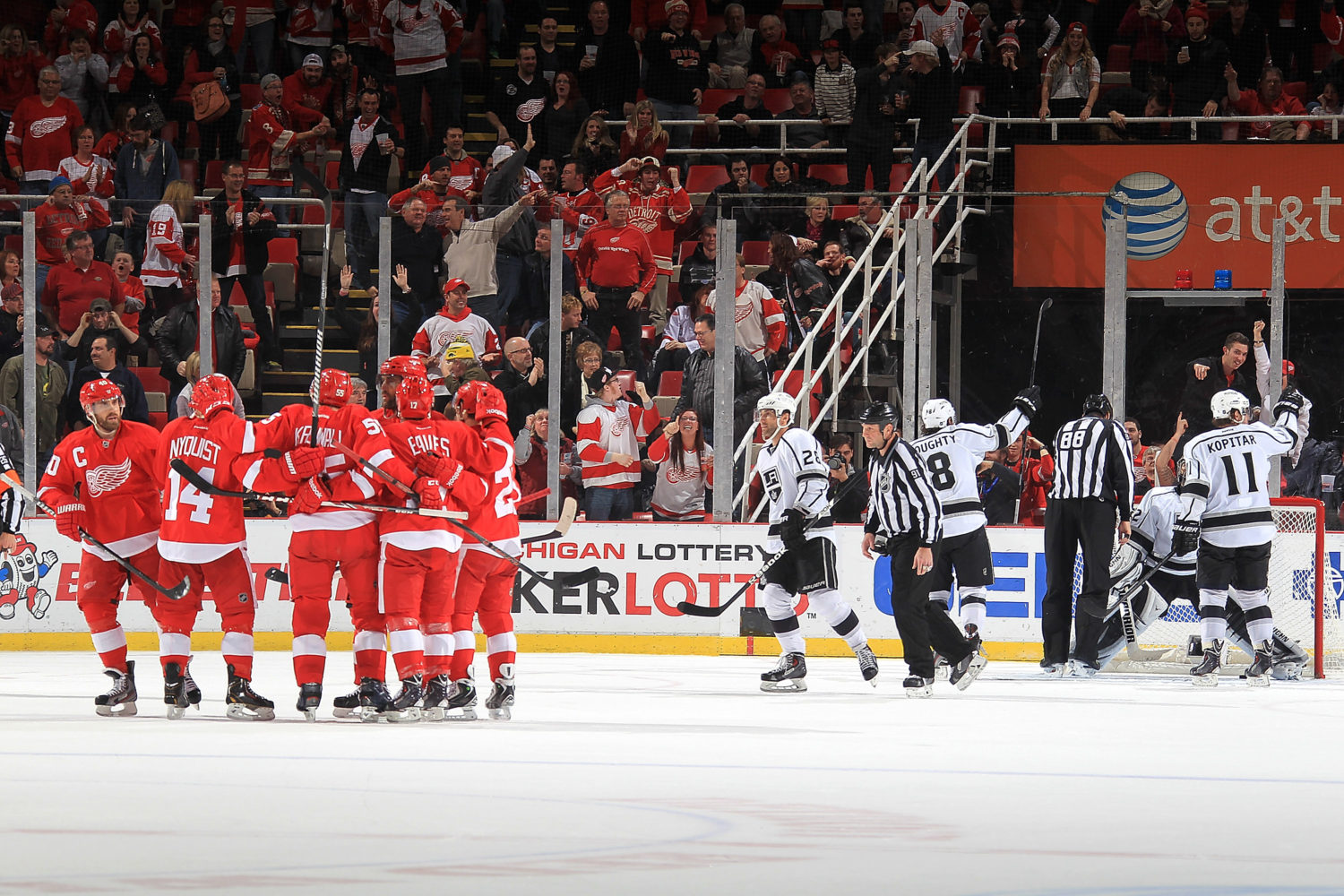 Several shots from around the arena this morning, including one of the hallway leading to Detroit’s dressing room, which was taken with the approval of the Red Wings’ public relations staff: 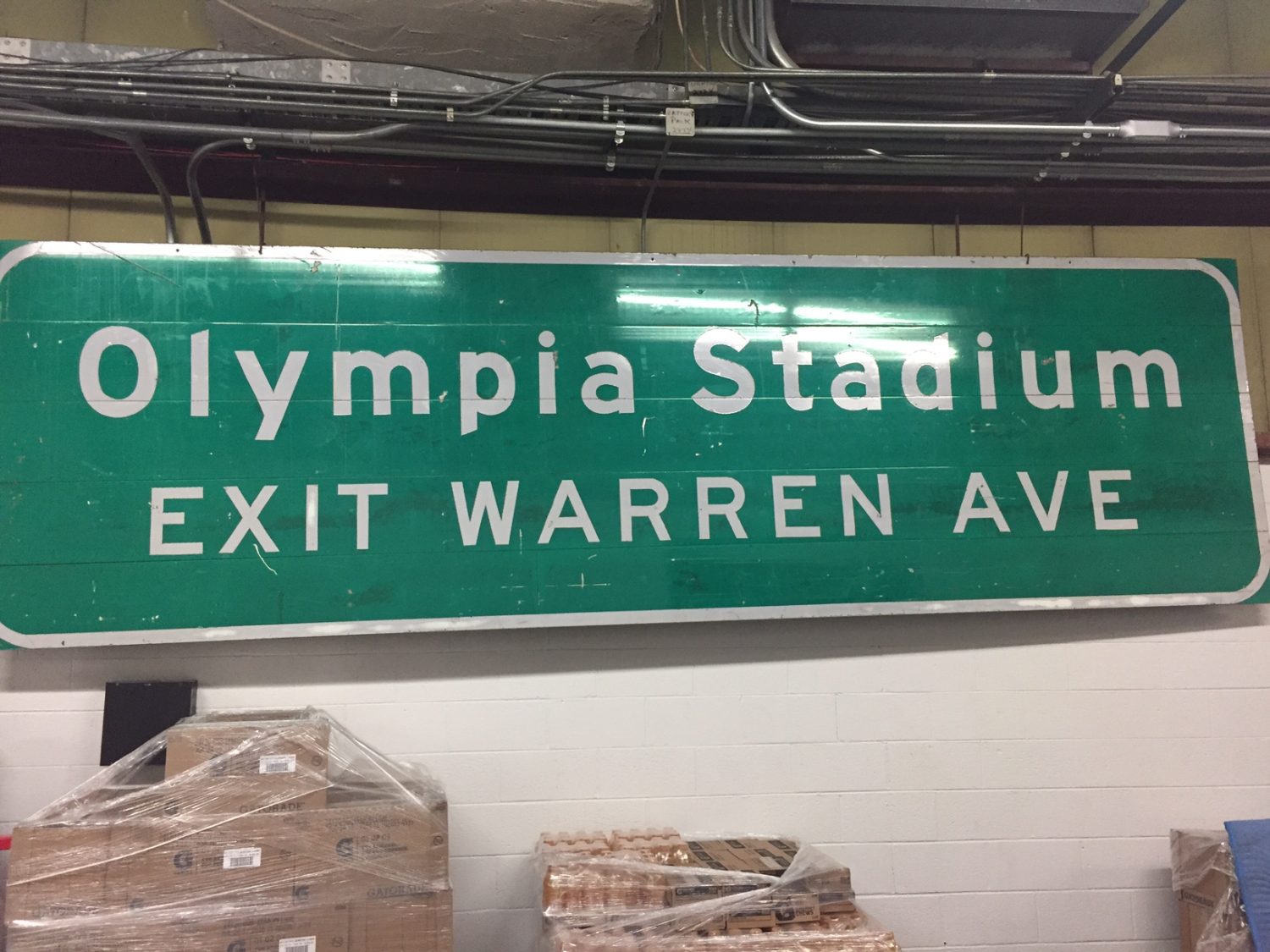 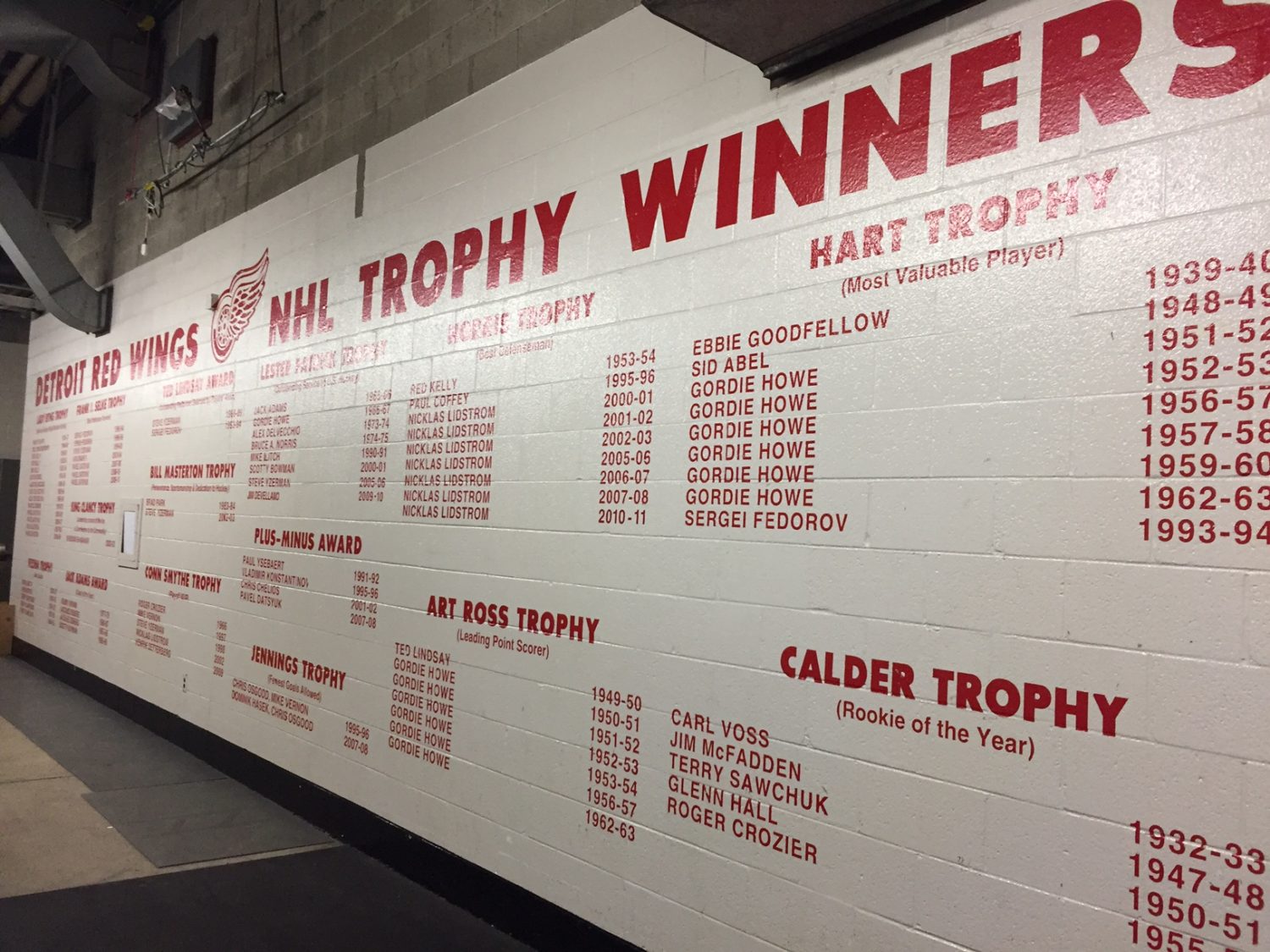 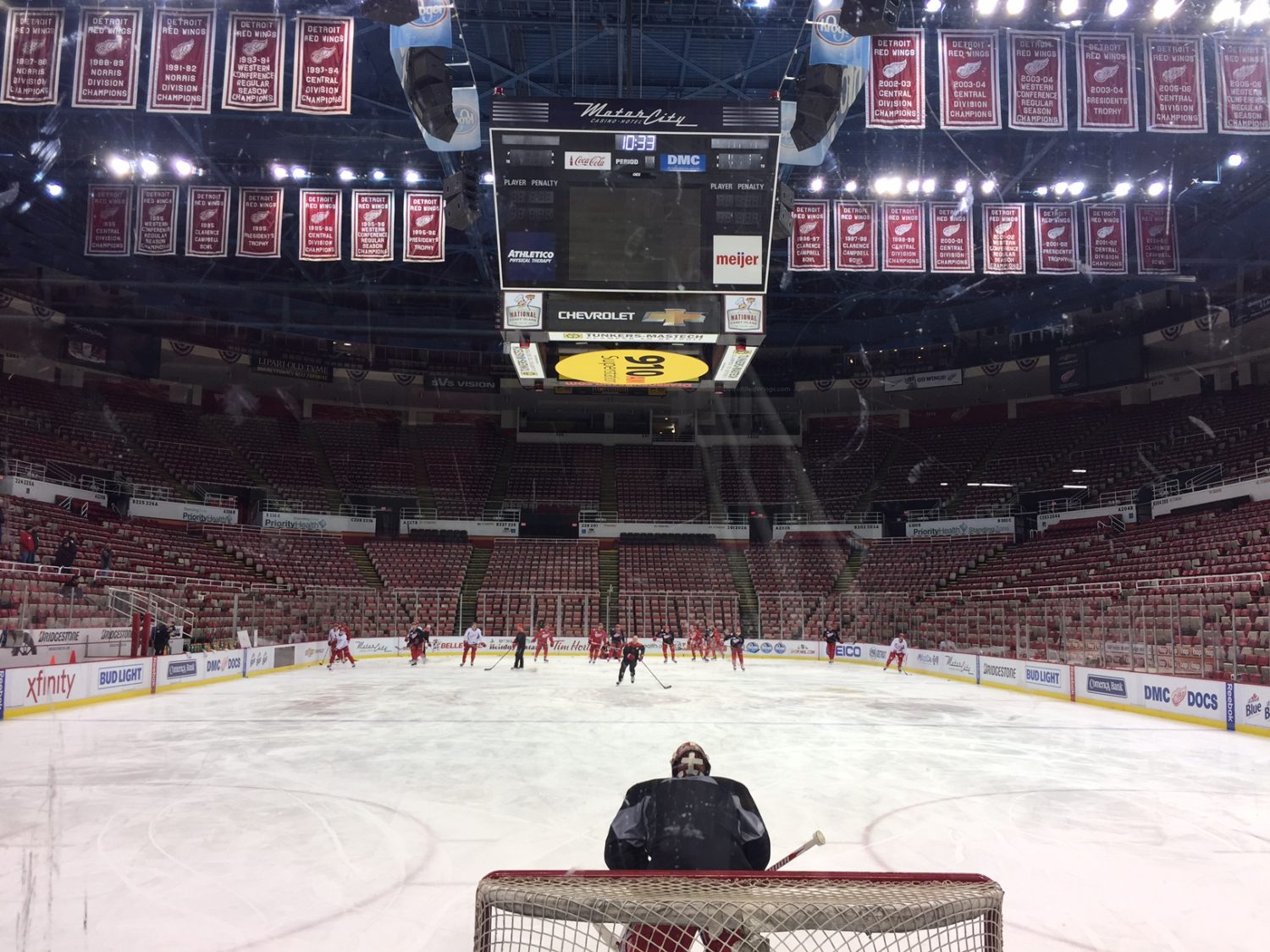 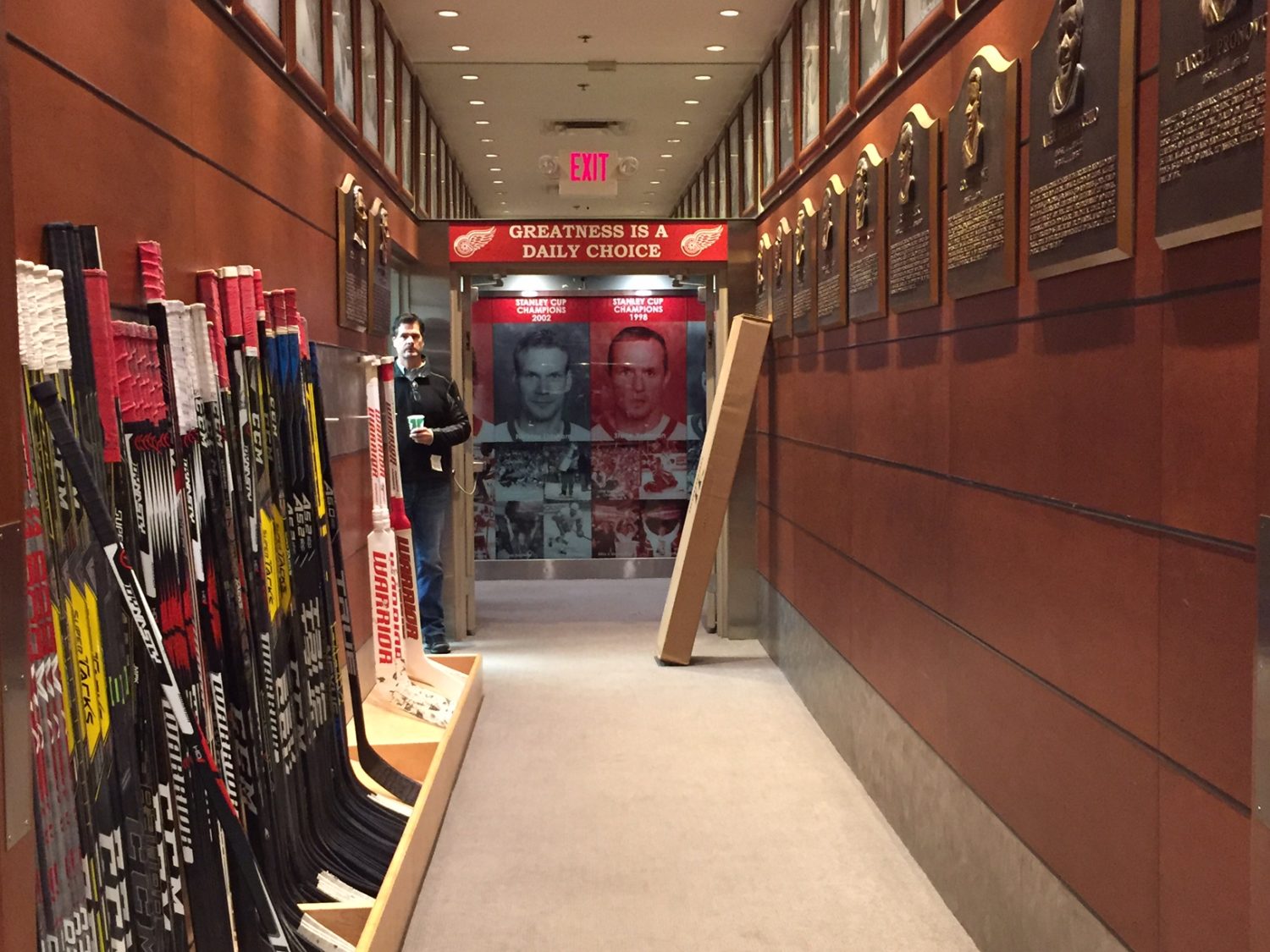 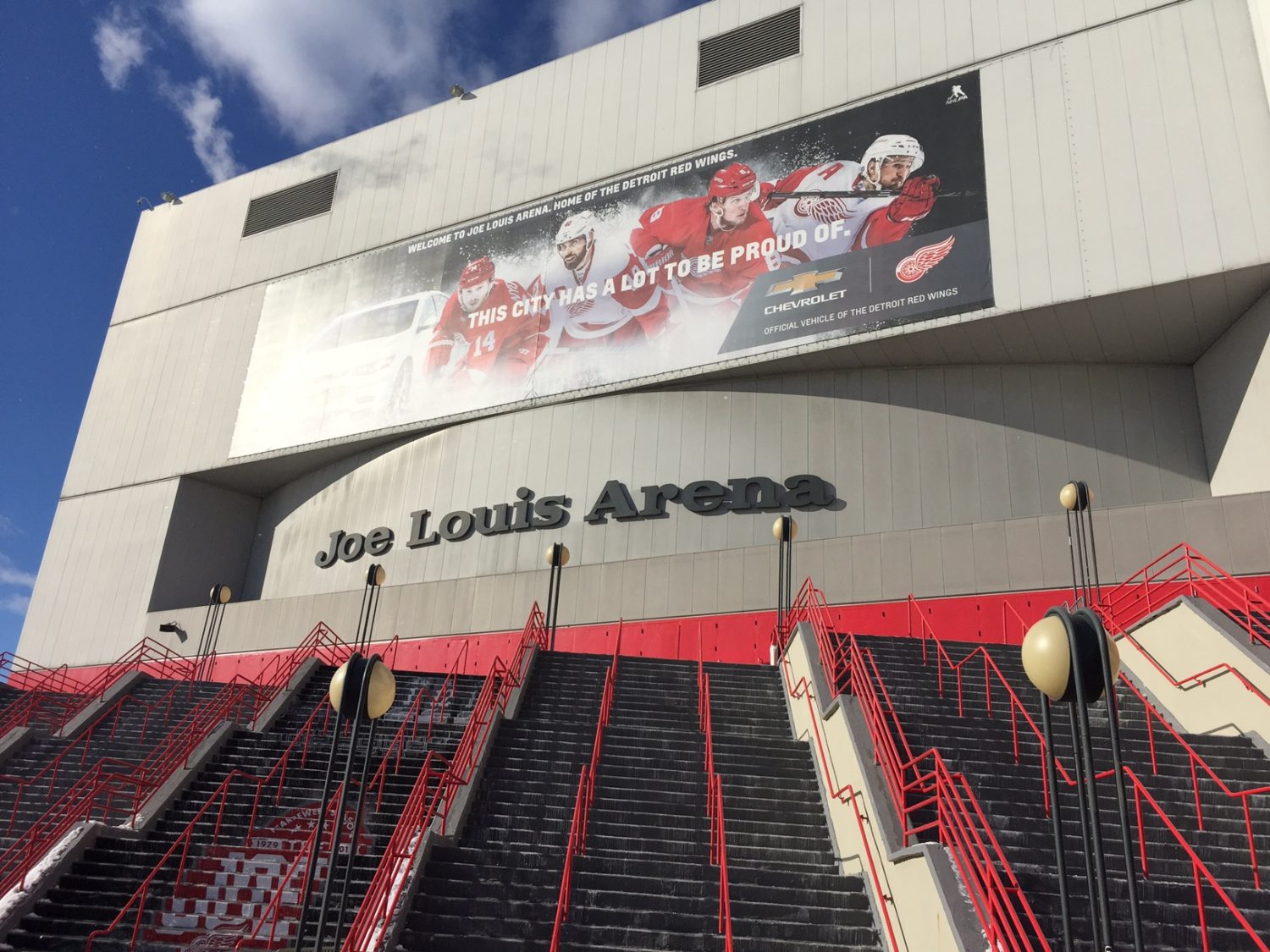